Tricky comments. In the Netherlands, the image of Ukraine collapsed. And what was it to drop?

December 10 2015
45
In the Netherlands, the scandal in Kiev trouble. It turned out that the Dutch media dropped into the mud the image of Ukraine as a possible partner in the EU. Or maybe they did not drop it. The authorities of Ukraine do a good job themselves. 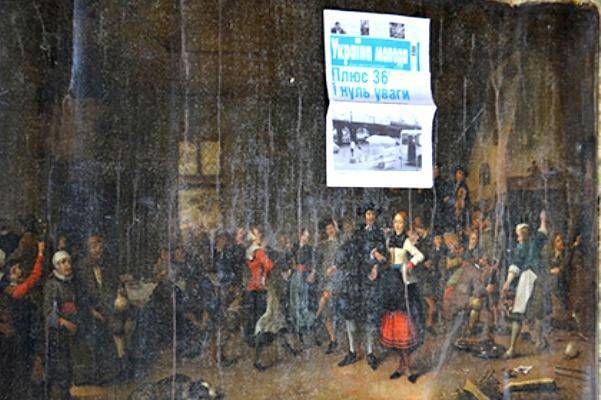 Just do not forget that in April next year in the Netherlands there will be a referendum on whether Ukraine will be in the EU or not. If they did today, the answer would be unequivocal. Naturally, negative.

What is the essence of the scandal?

And the essence of the pictures. Probably, it is not necessary to explain what the works of art of their fellow countrymen mean for the Dutch. It's like tulips, only hundreds of times cooler.

We are talking about stories with pictures of classic Dutch masters that were stolen almost 11 years ago from the Museum of West Friesland, and now seem to have been found ... correctly, in Ukraine.

Dutch media and network resources have literally exploded. Messages on this topic were counted in thousands. Long forgotten by all (except for museum workers) theft turned out to be a rather large bucket of gas in the maydan fire. Only zaaydanili Dutch.

First came the information from the museum management. The museum reported that it knew about the fate of 24 paintings, as well as a large number of silver works of art that were stolen from it in the distant 2004 year.

In the morning, the museum director gave a press conference at which he informed that the paintings are now in eastern Ukraine, under the control of some "nationalist group." He explained that the museum was negotiating with him, but the parties could not agree on the amount of remuneration for the return of paintings. The museum offers 50 thousand, the fighters want 5 million euros. Negotiations are deadlocked.

Now the museum, through the mouth of its authorized representative Arthur Brand, is forced to make this information public, because they consider it highly likely that Ukrainians intend to resell the paintings. True, now the director, he said, fears that the fighters will simply destroy these paintings, which after such publicity have become dangerous for them. Both options are quite vital.

As the canvases stolen from the museum turned out to be in the Santa Maria terbate, commanded by the famous scumbag Boria Gumenyuk, it is not clear. It is clear only that the paintings were exhibited for sale for 50 million euros, preferably in cash, that is, "in black".

It is clear that the money would go to the cause of the Ukrainian revolution, all to the cent. On weapon for participants of the ATO, to help their families. The Dutch turned out to be either stupid, or indifferent to this matter, they did not appreciate the 90% discount and made a fuss over the whole of Europe.

And here in disassembly surfaced Gene Korban. The leader of the party UKROP, a friend and ally of Beni Kolomoisky. Allegedly, he is not a poor man, he decided to donate part of his collection to the needs of his comrades-in-arms. But he donated, of course, not the most valuable rarities, including Van Gogh and Wermer, and modern canvases "antique".

Moreover, in the media leaked information that many "modern" wall decorations modest cloister Korban at various times were stolen from Dutch museums, including from the National Gallery.

Further more. Two more characters appeared who just flew into the story. Nalyvaychenko and Tyagnibok. Everything is more or less clear with the Freedom Party head and party member Gumenyuk. But for some reason in many media the names of Nalyvaichenko and Tyagnibok are standing nearby. In the course of the play, the fighter against corruption in Ukraine and the former head of the SBU did not shy away from the mere protection of picture thieves.

At the very least, Brand has officially declared that both gentlemen are directly involved in obtaining a ransom. And they point to them as the patrons of Humenyuk and Korban.

The Dutch Foreign Ministry said that the Ukrainian authorities have been officially notified of the incident with the paintings.

And the Dutch media are full of indignant shouts of "And this country wants the EU?" and beat all the bells on hand. Starting with the first television channel and ending with social networks. Well, they like the work of their fellow countrymen in the Netherlands, what is there to do?

Of course, the alarm bell is not yet the death knell. However, the Russian man in the street does not need to tell tales about the adequacy of the current Ukrainian authorities. That is why the gentlemen rulers are unlikely to realistically assess the scale of the adventure that they caught.

And the death knell for Ukrainian Euro-ambitions may well sound. In April, 2016. On the vote on the question whether Ukraine should be a "European one".

Return Van Gogh, connoisseurs ... And go through the whole battalion to clean up the image. And grab shovels for manure. The surest tool for cleaning the Ukrainian image.

Ctrl Enter
Noticed oshЫbku Highlight text and press. Ctrl + Enter
We are
Who do we have there in the rain and in the mud?Results of the week. "God forbid to see Russian revolt, senseless and merciless!"
45 comments
Information
Dear reader, to leave comments on the publication, you must to register.