Nuclear death sleeps at the bottom of the oceans 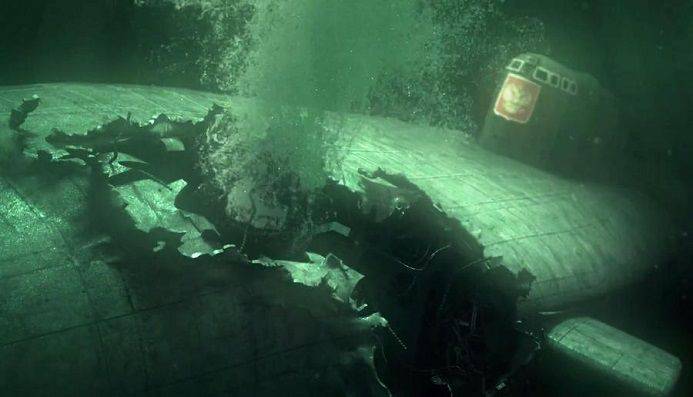 Nothing worse than the atomic bomb humanity for all its history not invented. The accumulated nuclear charges are enough to destroy the planet several dozen times, although one is enough. Every atomic bomb is guarded, so that God forbid something does not happen. Not an explosion, just a release of radioactive stuffing threatens a terrible environmental catastrophe. And while few people think about the danger that threatens humanity from the bottom of the oceans.

What do you think can be found at the bottom of the oceans and seas? Exotic underwater plants, previously unknown to science species of living organisms? Of course. And also cans, glass bottles and a lot of other attributes of human civilization, thrown by it into the ocean as a garbage can.
However, in addition to household garbage, “surprises” are stored on the bottom, which represent a direct threat to both humanity and the planet as a whole. It is about the "atomic gifts" of our civilization, resting on the bottom of the ocean. Like time bombs, they lie under many kilometers of water and wait in the wings.

10 April 1963, the American submarine "Tracher" went to the beyond depth and was crushed by hydrostatic pressure. 129 man crew remained at the bottom. The boat did not carry nuclear weapons, but the atomic reactor still rests at 2,5-kilometer depth.

21 May 1968 for the last time contacted the submarine "Scorpion". In October, a submarine lying on the 3-kilometer depth was discovered using a deep-sea apparatus. Nuclear reactor and two torpedoes with nuclear warheads and lie on the bottom of the Atlantic. 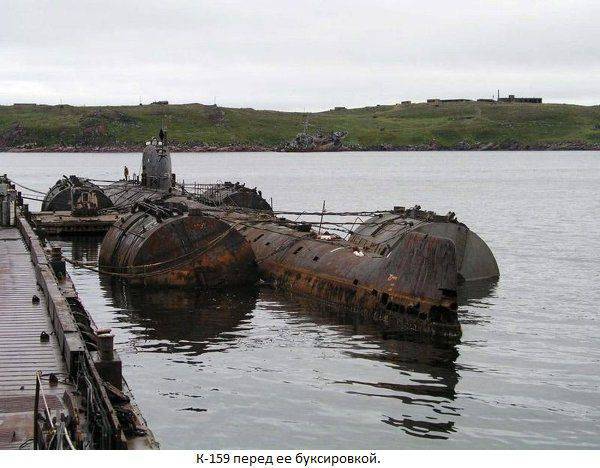 In 2003, the Russian K-159 towed for recycling sank in the Barents Sea. In 2014, it was examined by Russian and Norwegian scientists. The level of radiation around the boat in the normal range. Experts say that 20 years can not worry, but two decades later, yes, they will pass, and then what?

Aviation also contributed to the clogging of the oceans.

Gifts from the sky

13 February 1950 of the year (don't believe in the 13 number after that) next to Alaska, in Texas, the B-36 engine caught fire. The crew dropped an atomic bomb, and then jumped himself on parachutes. In March, 1956, the B-47 with two atomic bombs disappeared over the Mediterranean. In 1968, the Americans lost 4 atomic bombs off the coast of Greenland, found and raised only 3. 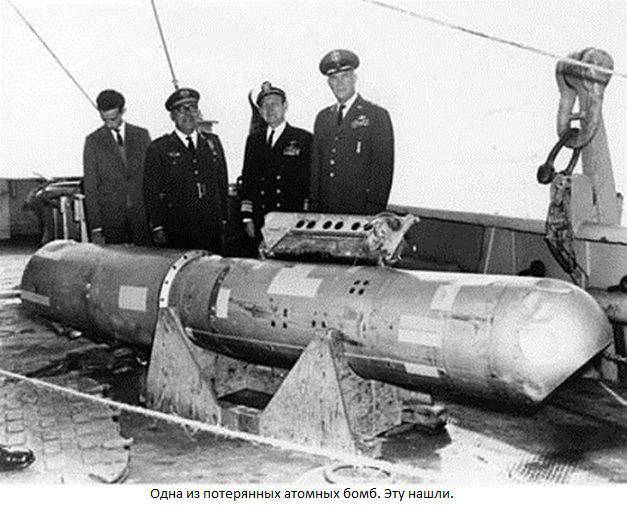 In 1958, the US B-57 off the coast of Georgia collided with a fighter. To reach the airfield, the crew got rid of the “ballast” - the atomic bomb “Mark 15”, 100 times more powerful than the one dropped on Hiroshima. Lost "Mark" for 10 weeks searched, but could not find, it still lies there, literally 10 km from the coast.

It is claimed that the Americans officially recognized the loss of 11 nuclear bombs! But how much they really lost, nobody knows. After all, even the recognized ones are the result of the noise raised by newspapermen and witnesses when it was simply impossible not to admit what had happened.

Did the Soviet side have any losses? Surely they were, but even less is known about these cases. The problem of overly curious journalists in the USSR was able to solve quickly and effectively.

Man is his own gravedigger

All these “burials” were the results of accidents, often accompanied by human victims, but what to say about cases when a person without any particular reason, due to laziness or thoughtlessness, deliberately lowered atomic “time-keeping mines” to the bottom?

In the 1968, an accident occurred on the K-27 submarine, as a result of which the boat was literally “saturated” with radiation. For more than 10 years the military puzzled over what to do with a “dirty” boat. In 1981, the problem was solved simply and simply: K-27 was brought into the Kara Sea and flooded.

And I must say, it was not at all know-how. For several decades the USSR had buried spent nuclear reactors of nuclear submarines and nuclear-powered icebreakers in the cold northern waters. And it was considered normal things.

And now about the main thing

During the 20th century, people with blunt obstinacy turned the World Ocean into a nuclear burial ground. If specialists are constantly observing the earth’s dumping of nuclear waste in order to rule out the appearance of a second Chernobyl, then there is no surveillance of the marine repositories.

Bombs can not explode. But for decades, the hull of bombs and recessed nuclear reactors gradually destroys corrosion, sooner or later their deadly stuffing will fall into the environment. Water, algae, fish and animals living in the ocean will be infected.

Yes, water takes 70% of the earth's surface, it would seem that our planet has several hundred poisoned square kilometers! Yes, if the accident happens in the Arctic Ocean, it will affect a minimum of people. But many "gifts" lie within a few kilometers. from the densely populated coasts of Europe and America, where fishing boats and cruise ships are more than fish in the sea. In this case, the consequences of emergency will be catastrophic.

And the last. Unattended atomic bombs are constantly attracting the attention of international terrorists. It is difficult to steal a nuclear bomb from a protected base. And here lies itself, take it - I do not want. Experts say it is incredibly difficult to get a lost bomb from the ocean floor. Huge amounts and special equipment are needed. It is beyond the power of many states, and even terrorists persecuted by the international community are even more so. However, in recent years, terrorists suddenly got rich. And if you have money, then all other problems are solved.