Project "ZZ". Against capitalism, against democracy and for compromise with Putin

December 10 2015
52
American analysts are confident that tensions between the US and the Russian Federation will continue to grow. The reason will be both the situation in Syria and the lack of regulation in Ukraine. The United States and Russia are embarking on an “insecure path,” some observers say. Lech Walesa, the former leader of the Polish Solidarity, offered his recipes for reaching a compromise with the Russians. Condemning both capitalism and Western-style democracy, Walesa said that the time had come to "help Russia take the path of change."


American analysts believe that for Russia the question of the suppression of the "IG" in Syria is much more acute than for Washington.

As the journalist notes "The Daily Beast" Kate Brennen, the number of foreign fighters who went to Syria and Iraq, is growing around the world. However, this question concerns primarily Russia, as well as the countries of Central Asia - from there, in 2015, especially many of those who are ready to fight on the side of IG travel. At least, the rate increased by 300%, the journalist reports.

According to expert estimates, thousands of militants from 2,4 came from Russia to the Middle East. The data is based on the research of Soufan Group, a New York security consulting company. Russia ranks third in anti-rating. The first place is reserved for Tunisia (about 6 of thousands of Allah's warriors arrived from there), the second place is for Saudi Arabia (2,5 of thousands of bearded men).

Keith Brennen clarifies that most of the Russian militants come from the North Caucasus (Chechnya and Dagestan are named).

Analysts of the Soufan Group believe that the motives of those Caucasians who stood under the banner of extremists in Syria and Iraq are personal rather than political. Experts are convinced that the Caucasian insurgents who joined the ranks of the “IG” are concerned ... with the search for the meaning and cause of their life, as well as friendship and adventure. 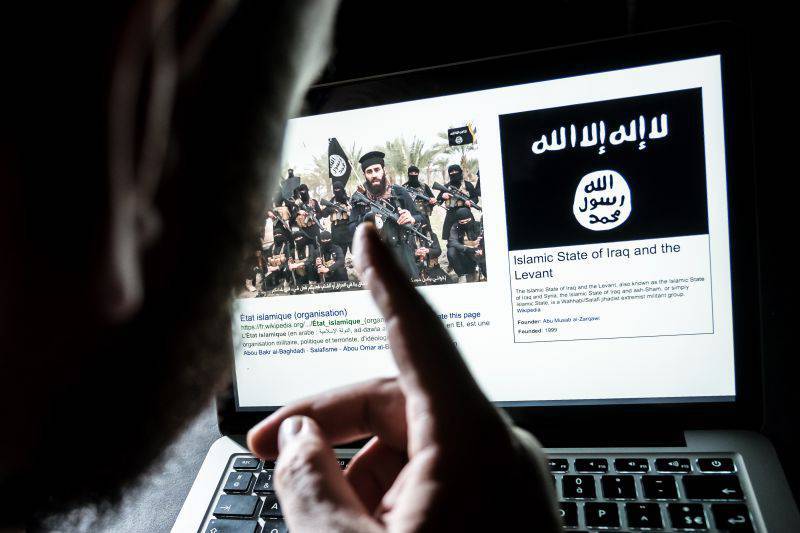 In search of adventures

Walter Pincus at «The Washington Post» makes the following thought: Washington and Moscow are embarking on an “unsafe path”, increasing the participation of their military in the Syrian civil war in Syria.

What happens next? Pincus admits that it is much more likely for Moscow to go deep into the war in Syria than for the US. And this war will not be air, but land.

At the same time, the author believes that, for V. V. Putin, the stakes in Syria are “much higher” than for the American President Obama, despite the bloody terrorist attack in San Bernandino. No wonder Vladimir Putin in a message to the Federal Assembly said that the special danger for Russia "comes from the militants who have concentrated in Syria": after all, "among them there are many immigrants from Russia."

America and Russia have a single goal in the Middle East: to destroy the leadership of "IG" and resist the militants ’calls for radical Islamists in different countries who are ready to make attacks against citizens of the Russian Federation or the United States anywhere in the world.

The journalist reminds that both Washington and Moscow sent groups of special forces to the region. Groups, of course, small. However, any build-up of forces and an increase in the intensity of the air strikes cannot solve the fundamental problems of Syria and Iraq, because of which people find the ideology of the IG attractive.

The main question for Russia, and for the USA too, is the same: can both states not be drawn into the exhausting long war in the Middle East?

The tension between the US and the Russian Federation, about which they have been writing a lot in the US and Europe in recent days, we will add, will grow not only because of the Syrian conflict, where the anti-Assad interests of the American coalition, including Turkey, collided, but also because of Of Ukraine.

According to "The American Interest", the tension between Russia and Ukraine, and at the same time between Moscow and Brussels, will only increase.

Now Russia claims that it is preparing to sue Ukraine over a debt of three billion dollars (Moscow issued a loan for this amount to the government of President V. Yanukovych several weeks before street protests at the beginning of 2014).

Russia has offered to restructure the debt in equal shares over the next 3 years, but under one condition: the West must provide guarantees. And the other day the Kremlin received a refusal from the West. The official document came from the US government: Russia was refused to provide guarantees for the obligations of Ukraine. Therefore, the Kremlin will apparently file a lawsuit against Ukraine after December 20, unless Kiev suddenly fulfills its obligations.

According to “The American Interest”, Putin’s lawsuit will create a “real headache” for Ukraine, and maybe Kiev will lead to great financial losses. The agency "Bloomberg" indicates that the possible restructuring of the loan includes "some rather unusual and rigid provisions."

Some Western leaders, the magazine reports further, would like to get rid of Ukrainian problems and focus on cooperation with Moscow in the Middle East. Many now believe that Putin himself would prefer to do without noise around Ukraine. In addition, he wants to enlist the support of his operation in Syria, as well as to convince the EU to lift sanctions.

Nevertheless, the publication believes, given the "ongoing provocations" and the fact that the sanctions regime will remain in force for at least six months, tensions will only grow.

A curious statement was made by the former leader of the Polish Solidarity Lech Walesa. Criticizing both capitalism and Western-style democracy, he said that the time had come to "help Russia take the path of change."

Lech Walesa gave a long interview to a Swiss newspaper "The weather" (original in French; source of translation - "InoSMI").

The ex-leader of Solidarity believes that it is possible to reach an agreement with Moscow and come to a compromise. Today, the former politician dislikes neither capitalism nor democracy.

According to Lech Walesa, democracy is “in crisis everywhere”. The Pole called himself a revolutionary and declared that he supports "the most diverse movements throughout the world." Then he said bluntly: "I am against capitalism and the current democracy." If the current unfit democracy cannot be repaired, limiting the number of mandates to just one, sending small parties to parliaments and making party funding absolutely transparent, then, as Valens predicts, “unrest will begin on the streets.”

“Is it possible today to find a suitable compromise with Vladimir Putin?” Asked the interviewer.

"Personally, I see two Putin," answered Walesa. “Putin alone knows how the world works.” Firmly holding the reins of the country. Just because the 80 peoples of Russia could demand independence. He holds Russia, but at the same time he is reforming it. Putin should be trusted. But there is a second Putin, a former KGB agent who says: "Let me get stronger, and I will restore order in my backyard." Putin is better not to believe. Of course, Poland and the whole world need Russia. In some ways, we need to help Russia go through the transition that we ourselves have done. If we maintain unity and solidarity, then we will push Russia on the right path. Not using force, but retaining rigidity. "

True, the current Europe does not have enough strength. And Putin "skillfully uses it."

As for the Ukrainian crisis, the former politician said the following: “We should not forget that the West is based on compromises, treaties and agreements, and Putin has violated them. He questioned the very essence of our existence. When we took out the nuclear weapon from Ukraine after the collapse of the USSR, Russia pledged to respect the territorial integrity of Ukraine. International treaties must be respected. We must not allow the strong to attack the weak. Russia has somehow lagged behind in its mental development from the West by at least 30 years. There is no real faith in democracy. ”

If analysts of the United States, predicting the growth of "tension" in relations between Russia on the one hand, and Ukraine and the West, on the other, are cautious in their judgments about the source of this tension, the former politician Lech Walesa is categorical: "You cannot allow the strong to attack the weak." At the same time, he reproaches the Russians for their strong backwardness from the advanced West and denies the Kremlin democracy (“There is no real faith in democracy”). However, the same Walesa condemns modern Western democracy and unflatteringly speaks about capitalism. Unlike many other experts, he is inclined to believe Putin in some way and look for compromises with him.

The growth of tensions between Russia and Ukraine, Western observers predict also because of the large Kiev debts. Russia says it is preparing to sue Ukraine for a debt of three billion dollars, issued in 2014 in the form of a loan to Viktor Yanukovych’s government. This question will clear up after December 20. However, the main thing is clear for a long time: there is nothing to pay Ukraine, and it will not pay. Even the Ukrainian curator Joe Biden, who works at the White House, has no doubt about that.