December 9 2015
132
Prime Minister Dmitry Medvedev gave an interview to journalists from five Russian TV channels. The focus of the questions was very different: from the state of the economy to the response to Turkey. The first question that was asked to Medvedev concerned the so-called "anti-crisis plan."


Responding to this question, Medvedev said that the “anti-crisis plan” had already worked, allowing it to stop the decline in production, along with the entire economy. Moreover, Medvedev believes that the economy is about to grow. 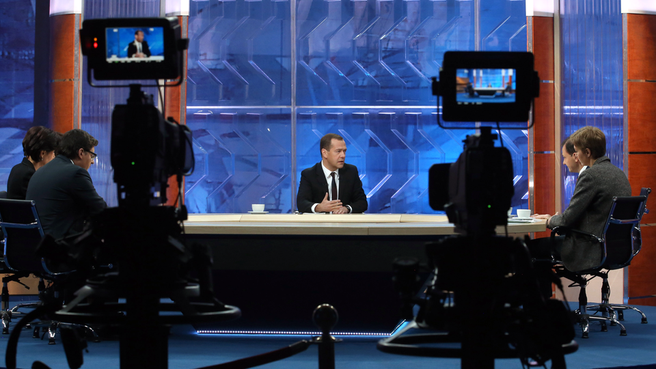 Head Russian government:
Now, on the basis of the data that the Government has, the Ministry of Economic Development has, I can say that the economic decline and production decline is suspended, and we presume that next year we will grow.

Dmitry Medvedev seriously believes that as a result of the measures taken, pension accruals and pension payments have not depreciated, the banking system works reliably. At the same time, Medvedev himself wondered whether it was worthwhile to extend the actions of the anti-crisis plan for the future, making it clear that, in his opinion, the crisis had completely passed ...

A representative of the Dozhd TV channel, Mikhail Fishman, was invited to the meeting with Dmitry Medvedev, who asked a favorite question for the ultra-liberal mass how the representative of the government would comment on the increase in military spending against the background of reduced social spending?

Medvedev:
Now we have tightened these costs to the world level, and we have a task - to re-equip with weapons with new, new military equipment by 2020, our armed forces are almost 70%. And this task will be completed, there can be no doubt. Why? Because security issues, issues of defense, no country can donate, even the smallest. Perhaps the smallest country in terms of population and territory is to plan substantial funds for defense and security. And what about our country? We are the largest, largest country in the world, with the longest border. If we do not have normal armed forces, we simply will not have a country. This, in my opinion, is an obvious thing.

At the same time, the head of government noted that the level of expenditures on education and medicine in the 2016 budget did not actually decrease in comparison with the budget of the previous year. Added Medvedev the following:
Another thing is that if conditions and circumstances allowed us, maybe we would increase them. There is no possibility for this now. But I want to emphasize once again: with regard to education, and with regard to health, the priorities remain the same, the costs remain the same as this year.

Dmitry Medvedev commented on the Ukrainian 3 billion debt. According to Medvedev, Ukraine will not pay back the debt, explaining why:
Hope dies last, but if you want my opinion, I have a feeling, because rogues.

At the same time, Medvedev added that in connection with the adoption by the IMF of a decision on which even in the event of a default, the Ukrainian economy can be credited, “seriously undermines the credibility of this organization.”

According to Medvedev, concerns about the economic association of Ukraine with the EU have not been removed, and Russia does not intend to open borders for low-quality goods that can flow through Ukraine from Europe to Russia.

I also spoke about measures in relation to Turkey during the interview. Dmitry Medvedev said that Turkey violated all the norms of international law and gave rise to reciprocal military actions. According to the Prime Minister of the Russian Federation, Russia did not take these steps, but it is taking a whole range of diplomatic and economic measures. At the same time, the head of government noted that such measures may affect the economy in terms of rising inflation.

Commenting on the actions of the Ukrainian “activists” on the blockade of the Crimea, Medvedev said that this blockade is an act of genocide against the residents of the Crimea, including many Ukrainians.