December 9 2015
43
Information Agency "BBC" with reference to its own sources, reports that the Syrian armed forces occupied the city of Homs - the administrative center of the eponymous province of Syria. British media reports that at the last stage an agreement was concluded between official Damascus and representatives of the so-called moderate opposition, according to which the “rebels” would not resist the armed forces when Syrian soldiers enter the city blocks. 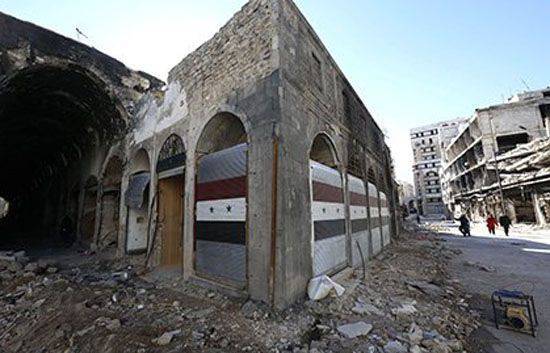 At the same time, it is reported that the militarized wing of the very “moderate opposition” is actively leaving the city and is heading towards Idlib province, where the positions of major terrorist groups are strong. It remains a mystery whether the “rebels” go in the direction of Idlib in order to help the government forces liberate this Syrian region from the “Al-Nusra” Front and DAISH, or intend to regroup, uniting with these groupings, in order to hit the Syrian troops again ?

It should be added that Homs, whose pre-war population was estimated at almost a million people in 1, was under the control of various groups for more than four years, including the terrorists of the same Dzhebhat-en-Nusra.

Ctrl Enter
Noticed oshЫbku Highlight text and press. Ctrl + Enter
We are
Reports from the militia of New Russia for 27-28 September 2014 of the year
Military Reviewin Yandex News
Military Reviewin Google News
43 comments
Information
Dear reader, to leave comments on the publication, you must to register.