December 14 2015
7
On a minefield, handicraftsmen compete with professionals.


Mines are one of the most efficient species. weapons, especially well proven in local military conflicts of the recent past. The losses from them of the personnel and equipment of our troops in Afghanistan and the two Chechen campaigns are many times greater than from small arms or artillery fire.

According to military historian and analyst Nikolai Malishevsky (Grodno), it was the mine war that brought the federal forces the greatest losses - up to 75 percent of manpower and almost 100 percent of automobile and armored vehicles. This type of opposition gained particular activity in the second Chechen one. Then the bandits announced the beginning of a total mine war, in which so-called civilians, including children and teenagers, took an active part. For the installation of each mine relied tariffed payment - from 300 to 10 thousands of US dollars, depending on the result.

Land mines from the personal archive

Practically every day several units of equipment or people were undermined in different parts of the troubled republic. And this despite the intensive work of the sappers. A curious document is stored in my archive - the combat report of the engineering service of the Interior Ministry troops of Russia to the United Group of Forces (troops) in the North Caucasus region in one day - March 22 2003: “In 8.40, when setting up a barrier on the checkpoint number 14 - Mesker-Yurt, Shalinsky district, a land mine was detected (F-1 grenade stretched). Destroyed. In 8.55, when a barrier was placed on the route Gudermes - Djalka, Gudermes District, a bomb was hit by a surprise (a camera filled with an explosive). In 9.08, an engineering reconnaissance (IRD) during an engineering reconnaissance on the Khankala – Prigorodny, Grozny (rural) region route, found a bomb that was controlled by wire (152-mm projectile). Control rendered on 150 meters. In the 9.45 IRD, when carrying out engineering reconnaissance on the Chiri-Yurt-KPP route No. 121, Urus-Martan district, a bomb was found in the destroyed building (2 shot PG-7, 5 grenade RGD-5) stretching. When carrying out engineering reconnaissance on the route Urus-Martan - Alkhan-Yurt, Urus-Martan district, 9.50 IRD, 2,5 kilometer from the road at a depth of 50 centimeters was detected by a wire-driven bomb (the combat unit of the Grad rocket stuffed with explosives). Control rendered on 100 meters. In 10.45 IRD when conducting engineering intelligence on the route ul. Mayakovsky - Petropavlovskoye Highway near the cannery, Leninsky district of Grozny, on the side of the road, on a tree, at a height of 1,5 – 2 of a meter, an explosive wire-driven bomb was found. Control rendered on 70 meters. In the 12.25 IRD, when carrying out engineering reconnaissance on the route Samashki - checkpoint No. 190, Achkhoy-Martan district, a bomb was detected, controlled by wires (two 152-mm projectiles). Control rendered on 100 meters. ” 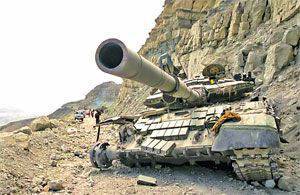 Preserved in my archive and mournful lists of combat irretrievable losses of soldiers of the two units of the Interior Troops of Russia. Before the start of the active phase of the mine war in 2000, 22 from 56 of the soldiers of the Krasnodar Air Force Division died because of mines and land mines, and the following year, which marked the peak of activization of the militants, died from 25 of the killed soldiers and officers of the Novocherkassk Division of 23 Rocket Troops as a result of mine blasting injuries. The explosion of a powerful land mine, installed at the Dynamo stadium 9 in Grozny, May 2004, killed the head of the Chechen Republic, Akhmat Kadyrov, and several who stood next to him. I suffered from a powerful explosive device attached to a truck, and a group of my comrades, special forces 8 OSPN VV MIA.

The insidiousness of these ordinary-looking “fools” or, on the contrary, elegant “tricks” lies in their relatively small dimensions, effectiveness of destruction, stealth, suddenness of use, the possibility of a remote explosion and a dozen or two other dubious advantages. Mines differ in purpose: known not only anti-personnel and anti-tank, but sea and anti-helicopter, initiated by mechanical action or a change in the electromagnetic field, radio-controlled. Simply put, mine is almost an ideal machine for removing a person or equipment from the sea, land and air. I would not be surprised if work is also being done on the use of mines in outer space.

Without getting into the wilds of a broad classification of mines and stories their use, we note that the mine-explosive business is very popular with a significant number of artisans who are part of the illegal gangs, whose products were called IEDs - improvised explosive devices. This may be the most dangerous of all types of VU, because of their design features and original methods of bringing into combat, known only to the manufacturer. But among our sappers there are top-class professionals who are capable of clearing any explosive devices and systems.

In my archive, there was a video mastering session on mining, which was given to our officers by Colonel Igor Semin, commander of the 7 squad “Rosich” (one of the oldest units of the special forces of the Internal Troops of the Ministry of Internal Affairs). Among other things, Semin spoke about an interesting method of mining the area, called an envelope. Its essence is that, for example, moving away from the pursuing enemy, you can quickly and reliably mine a piece of terrain with an area of ​​up to one hectare, inclusive, when the mines themselves, the fuses to them and the time to install them are not enough. To do this, you need 15 minutes and only five minutes of the PWS type, which are installed with a slight slope, degrees in 15 from the ground at the corners of the lesion field, tied with stretch marks. One disguised mine is placed in the center of the field. The “monk” spreads the fragments along the horizon at 50 – 70 degrees. The height of the sector of destruction - from 15 centimeters to four meters at the ultimate slaughter range to 50 meters. It is enough for the enemy in the heat of the chase to hook at least one stretch, as the rest of the “toys” detonate, dropping a whole hail of steel balls and cylinders onto the heads of the unit that fell on the field - up to 500 pieces each. The effect exceeds all expectations.

About the process and features of mining-demining can talk for hours. For example, that the most commonly used contact, radio-controlled mines, land mines, mines with anti-recoverability, magnetic and plastic housing. Plastic is widely used, the smell of which does not react service dogs. On paved roads, mines are placed at ramps and shoulders, under asphalt or concrete. To increase the power of the explosion using land mines made from unexploded bombs and artillery shells. In order to more effectively defeat manpower, combined mining is used: an anti-personnel mine or a directional action mine is installed in conjunction with an anti-tank mine. Actively used tactics "explosions bait." This is when the bandits "slightly" undermine, for example, the police UAZ, wait for the arrival of the operatives and then produce a second, more powerful blast leading to numerous victims.

The effective development of our sappers can be attributed to the system of mining "Hunting". This, according to experts, is a weapon of a sabotage nature, designed for one hundred percent group defeat. It uses a combination of high-explosive pressure mines PMN-2 and jumping to a height of about a meter OZM-72. The latter are used with the electronic fuse MVE-72, triggered when the target sensor is broken (when PMN-2 is undermined). It is complemented by the MVS seismic detonator, which allows you to get as close to the mine as possible, but does not allow you to move away alive. In addition, the fuse is selective - it distinguishes the steps of a person from animals, which is important for mountainous and wooded areas.