December 10 2015
38
The experience of turning the provocateur into a partner failed.


The deliberate actions of Turkey against the VKS of Russia and the fully justified reaction of Moscow to these actions lead to a revision of the entire complex of bilateral relations. There are strategic decisions to be made. Including in the defense industry and on the "landfill" of countries located between the Russian Federation and Turkey.

Until recently, it was believed in our leading circles and government expert groups that the contradictions between Ankara and Brussels, even though Turkey is a member of NATO, would almost lead to a political and economic alliance with Russia. Therefore, in fact, a large-scale project “Turkish Stream” appeared, intended for the supply of gas to Europe bypassing Ukraine. And for some reason, due attention was not paid to the fact that Turkey in this case also becomes a transit country, and the route through it is at least a quarter longer in comparison with the Ukrainian or Belarusian one. But the much more profitable and reliable project Yamal - Belarus - Europe-2 is still frozen. 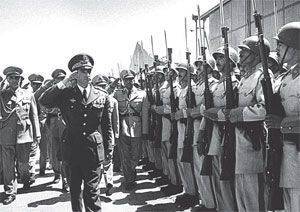 Mohammed Reza-Pahlavi knew about
Turkey's aggressive intentions and spoke
about them to Stalin. Photo: last.fm

It was also lost sight of the fact that Turkey not only lobbies, but also largely finances gas pipeline projects from Azerbaijan and Turkmenistan, bypassing Russia, aimed at the EU. That many Turkish politicians and experts advocate for the competition of Iranian and Russian gas in Europe.

Ankara understands that Russia is interested in new routes because of their strategic importance to the profitability of the gas industry and the budget revenues of the country. Playing on these factors, Turkey sought to reduce the cost of our gas for itself, unsuccessfully linking it with the solution of questions on the preparation of the construction of the "Turkish stream" on its territory.

Meanwhile, since 1993, military-technical cooperation between Turkey and most of the countries of the southern and south-eastern regions of the former USSR (except for Armenia and Tajikistan) has intensified sharply. It is estimated that direct and indirect Turkish investments in the defense industry of the former Soviet republics over the 1995 – 2014 years more than doubled. And to date, almost twice the Russian. Thus, the defense industry of the designated region is actually tied to NATO.

In terms of investment in the production and financial sectors of the same countries and in the growth rate of these investments, Turkey, too, was ahead of 1991 and still ahead of Russia. It is clear that such an Ankara strategy has always had a weighty “backup” in the form of a country’s membership in NATO.

It is also important that national, foreign and mixed investments in the Turkish defense industry have doubled over the past 15 years and continue to grow. This is a record figure for NATO (second after the United States). Increasing the mobility and combat power of the Navy, long-range artillery, tank troops, airborne and sabotage units, multiple launch rocket systems, bomber aviation, more destructive types of ammunition, television and electronic intelligence are the main directions of these investments.

A special question is the Black Sea economic and military-political strategy of Ankara. To begin with, we note that up to 25 percent of the annual export volume of our oil already for several years comes from Novorossiysk and Tuapse through the Bosporus - Dardanelles. Freedom of navigation through the straits is guaranteed at the international level (Montreux 1936 Convention and its annexes). But the Turkish jurisdiction in this area does not guarantee against all kinds of surprises. It is worth recalling that in the second half of 90's, under the pretexts of congestion congestion or environmental discrepancies of tankers with Russian oil, Turkey periodically delayed their passage. Losses on our side exceeded 600 million dollars.

By the way, back in the 1945 – 1948 years, the USSR proposed raising the international status of these straits and prohibiting the passage through them of military vessels from countries outside the Black Sea-Aegean basin. The West and Turkey have increasingly rejected these proposals. And the post-Stalin leadership of the country seemed to forget about such an important strategic issue. Khrushchev at the end of May 1953-st even apologized for the former unreasonable demands on Turkey ...

Especially since this issue has not been raised after the 1991 year. But since that time, the NATO Navy has increasingly been visiting in the Black Sea, and most often since the spring of 2014, in the ports of Batumi, Poti (Georgia), Odessa, Nikolaev (Ukraine), Constanta (Romania). That is, near Transnistria, Crimea, Krasnodar Territory, Abkhazia.

What is interesting: at the same time with the "pouring" incidents, the separatists in Chechnya, supported also from the territory of Turkey, blocked the Azerbaijan-Grozny-Tikhoretsk-Novorossiysk-Tuapse oil pipeline. And then the construction of the Azerbaijan-Georgia-Turkish Ceyhan branch began. At the beginning of 2000's, this artery dragged almost the entire transit of Baku oil over on itself.

With regard to ensuring national security, according to estimates of British and American sources (2012–2014), the ratio of the combined combat potentials of the Black Sea naval forces of the USSR and Turkey in the mid-70s was 3 to 1. In 1985, it was already less. than 1,5 to 1, and by the end of 2014 this figure was already 1 to 3. At the end of May 2013, Admiral Igor Kasatonov, former commander of the Black Sea fleet RF, estimated the ratio of these potentials in approximately the same proportion.

It is useful to recall the provocative policy of Ankara during the Great Patriotic War, when Turkey in large quantities and at low prices supplied the Nazis with various strategic raw materials (chromium, cobalt, nickel, vanadium, copper, manganese). By their provocative actions in the regions bordering the USSR, the Air Force and Navy of Turkey could not but contribute to the surrender of Odessa, Sevastopol, Kerch, and the breakthrough of the aggressors to the North Caucasus. Finally, the planned entry of Turkey into the war on the side of Germany in the event of the fall of Moscow, Stalingrad, the breakthrough of the aggressors in the South Caucasus. By the way, according to the NKGB of the USSR, from March 1941 to November 1945 in the North Caucasus, Transcaucasia, Central Asia (including Kazakhstan), the autonomous republics of the Volga region and the Urals were neutralized more than 500 emissaries and conspirators, who worked simultaneously in Berlin and Ankara.

According to the memoirs of the NGSH Sergey Shtemenko, no one could vouch for 1941 – 1943 that Turkey, concentrating large military forces and assets near the border with the USSR, would not enter a convenient moment into the war on the side of Berlin. A similar opinion was expressed in Tehran at the talks with Stalin on November 30 of 1943 of Iran’s shahins (since the autumn of 1941 of the anti-fascist coalition and the Lend-lease of the “bridge” in the USSR): “We expected a Turkish attack on neighboring regions of the USSR in 1941 and especially in 1942. There were also Turkish military plans for a breakthrough to Baku through north-western Iran, to seize parts of the trans-Iranian allied supply corridor of the USSR in the Armenian or Azerbaijan Republics. ”

It is known that in 1939 – 1940 there was a plan for a joint invasion of the Transcaucasus, the Crimea and the North Caucasus by the troops of England, France and Turkey, codenamed Fuel, as if to help Helsinki (during the Soviet-Finnish war). The commander of this coalition, French General Weygand, told 1940 in January when discussing the invasion options: “With some reinforcements and two hundred aircraft, including from Turkey, I would take control of the Caucasus through Batumi, Nakhchivan, and enter Russia, like a knife in butter. " But Germany’s invasion of Denmark and Norway, along with Finland’s capitulation in the spring of 1940, eliminated the threat of that invasion.

The listed facts of a hostile policy towards the USSR / RF and the last Turkish provocation against Russia are not one of the fields of the berry?

Today, it is required to carefully check our policies and competently, more precisely, to respond comprehensively to the challenges posed by Ankara - propaganda, economic, military and political.

Ctrl Enter
Noticed a mistake Highlight text and press. Ctrl + Enter
We are
About Stalin and KhrushchevWhat you didn't want to know about England
38 comments
Information
Dear reader, to leave comments on the publication, you must to register.