Quite a lot has been written about the products of enterprises belonging to the High-Precision Complexes holding. Not only experts and specialists, but also ordinary people not only know what Pantsir, Iskander, Cornet, Exhaust are, but also have a good idea of ​​what these weapons and military equipment are capable of.

But in the holding's product line there are products that are not so well known to the general public, although without them operational tactical missile systems, anti-aircraft missile systems, and even ordinary ones are useless Tanks.

Light in the tank

Iskander is a complex with very high power consumption. Without normal powering OTRK useless. This is the problem of all modern high-tech weapons systems - the Pantyr and C-400, etc. If the systems move in motion, they receive electricity from the generator, and that in turn works from the main engine, then at the starting position, no matter how powerful nor were the batteries, they would still be enough for a very short time, and it would be costly to drive the engine at idle. The service life is knocked out, and most importantly, the fuel is consumed, ”the officer of the Main Automobile and Armored Directorate told the Military Industrial Courier.

A similar problem with modern tanks, self-propelled artillery installations, whose systems and units have become quite complex. “It was possible to manually rotate the T-34 tower in the Great Patriotic War,” recalls the tank officer.

For the full functioning of the fire control system, stabilizer, automatic loader, etc., an electric current is required. When the engine works, problems with electricity, of course, does not arise. But what if, for example, a tank or an ACS took up a position, are in ambush?

To solve the problem of energy supply, the Chelyabinsk Special Design Bureau Turbina, which is part of the High-Precision Complexes holding, develops and manufactures small-scale gas turbine engines, as well as multifunctional gas turbine units, which are firmly incorporated into the onboard equipment of Russian T-80 family tanks, self-propelled artillery units. MSTA family, C-400 anti-aircraft missile systems, Iskander operational tactical complexes and many other models.

In particular, the gas turbine power units of the GTA-18 series, which are distinguished by their small dimensions and weight, can not only provide the T-80 tank system with electricity for a whole day, but also charge the batteries of the machines, ensure the start of the main engine at low temperatures units, they can also be mounted on a fender of tanks when upgrading them.

It is noteworthy that as the auxiliary power unit (APU) of the American tank М1А2 "Abrams", it is currently supposed to use a hundred kilogram rotary engine with a power of 10 kilowatt. However, while there is no accurate data on the completion of tests of the APU, the existing photographs of the Abrams (not only the US Army, but also the armed forces of Saudi Arabia) show characteristic boxes with standard additional batteries installed in the back of the tower. 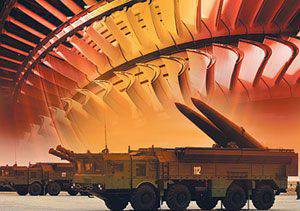 German developers of armored vehicles on the most modern model of the main battle tank "Leopard 2А7" as an auxiliary power unit used a small-sized (weight - 115 kilograms) diesel engine M12 of "Steyr".

So why, in contrast to their Western colleagues, did Russian engineers prefer gas turbine power units?

“They run without problems at low temperatures, even in arctic conditions. Neither the diesel engine, nor the “lighters” (gasoline engines - AR) can compare with them, ”explains the GABTU officer.

Another feature of the units of the development and production of SKB "Turbina" is that diesel fuel in this power unit is used as the main, and kerosene and gasoline serve as duplicate.

“Of course, kerosene is optimal for gas turbine engines. T-80 tanks with gas turbine engines use T-1, TS-1, RT fuel, i.e. aviation kerosene. But in other tanks and self-propelled guns with diesel engines it is irrational to use kerosene for the APU - these are unnecessary problems with their refueling, transportation and separation of reserves. Kerosene is not only fire hazardous, but also expensive. But our tank diesel engines are multi-fuel, they can even be refueled with gasoline. Therefore, the power units on our tanks are multi-fuel, ”says the source of the Military Industrial Courier.

Unlike Western foreign power plants, including those mentioned American and German, located mainly in a separate armor box, fixed either in the rear of the tower, or behind the transmission compartment, Russian GTEs, which can be located on the fences inside the hull and are made with minimum dimensions in height, well protected from possible damage due to enemy fire.

Compared to the GTA-18, the AP-2DM power unit installed on the 19-18 ACS not only provides the on-board self-propelled network with direct current electricity, but also maintains the air conditioning of the inhabited compartment in the parking lot and in motion. As in tank energy registries, diesel fuel was used as the primary fuel in fuel-power plants, while kerosene and gasoline are used as a backup.

However, due to the large dimensions, the 2-19 power supply unit is already installed not in the artillery installation armored hull, but in a special protected compartment in the rear of the tower. This option seems to be more vulnerable compared to the one implemented on tank GTE-18, but for an SAU firing at the enemy from closed positions for tens of kilometers, the choice is justified.

More powerful and complex power units APK-40Т and APK-40ТМ, designed for launchers of operational-tactical complexes "Iskander", not only feed the on-board network and air-conditioning system, but also provide the drive for the units of the facility, including hydraulic pumps, generators etc.

But installed on modern anti-aircraft missile systems, including the C-400, the power supply unit of the AES-40 generates electric current not only from the GTE, but also from the chassis running engine through a special power take-off box.

"Turbine" from the cold

As already mentioned, one of the important advantages of gas turbine engines is the ability to work in arctic conditions with the exception of problems such as overcooling, freezing of the structure, etc. Currently, the development of the Far North is very active, research facilities are being created there geological surveys, mined minerals, military units deployed.

It is clear that complex infrastructure and various equipment require more electricity, which can only be obtained from mobile power units of various capacities. True, gasoline and diesel generators in extreme temperatures — often below minus 50 degrees Celsius, unlike gas turbines, are not always able to function normally.

Until recently, the American company CAPstone, which produces a wide range of such products, was the leading developer and manufacturer of gas turbine power units in the world. But now she has a worthy competitor in the face of the Chelyabinsk special design bureau Turbina, which created the MGTU-100 micro gas turbine unit with an 100 kilowatt capacity and running on natural fuel.

Presented this year at several international exhibitions, including “Oil and Gas”, as well as at the Moscow aerospace show, the new MSTU has interested potential buyers not only from the sphere of mining. Manufacturers plan to launch a new installation on the market as early as 2016. It is also in the plans of “Turbines” to develop on the basis of MGTU-100 a line of power units designed to perform various tasks and differ not only in power, but also most importantly in size and weight.

Another promising development of the Chelyabinsk Special Design Bureau is the PZA-18 starting-charging unit, also designed for operation in arctic conditions. It provides electric starter engine start-up and power supply of on-board electrical networks both on aircraft and on ground-based equipment. At the request of the customer, it is possible to include a welding set-top box and much more hydraulic and electrical equipment to ensure its operation in hard-to-reach places.

The products of the High-Precision Complexes holding SKB Turbina are made from domestic components and, according to their capabilities and characteristics, occupy leading positions not only in the domestic, but also in the world market.

Ctrl Enter
Noticed oshЫbku Highlight text and press. Ctrl + Enter
We are
What attracts kingsVersatile and ultra-precise
35 comments
Information
Dear reader, to leave comments on the publication, you must to register.