How many artillery shells need to keep in reserve? This question must be answered not by production workers, but by the military. But I can’t hear them worry. The Soviet "defense industry" spoiled them, in its time it had prepared enough to last for a third world war.

Soviet strategists, remembering 22 June 1941, counted on various options for the coming war. Including such when the special period will not be and it is necessary to be at war that is, without waiting for transfer of the industry to military rails. In case of a positional war, all the factories were preparing for the production of military products. The so-called second departments ensured that technical documentation and emergency supplies of equipment and materials were in order. And the attitude to this until the collapse of the Union remained extremely serious. 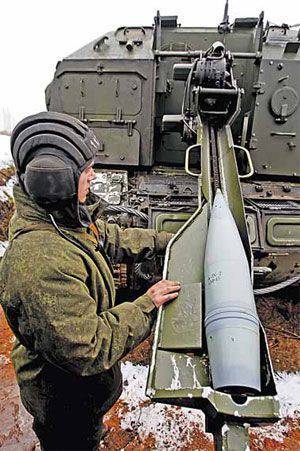 I remember that I was attracted to check the readiness of the Daugavpils Electrotool plant for production at a special period of NURS С-5. Personally, the chief engineer drove to departments, shops and warehouses, showing where and what is stored.

In the Tula Research Technological Institute (TNITI) there was a small department that was located in the same room, whose specialists did not get out of business trips related to checking the involved enterprises for readiness for war. Today there is only one man left. Not so long ago, he drove through our former factories. Only one of them kept the machines for machining the shells of artillery shells, did not throw them out onto the street, neatly moved them to the wall of the workshop, suspended them, covered them with film.

And when, for example, the director of TNITI complained at a meeting of shareholders about how much money is spent on depreciation of equipment maintained for a special period, the representative of the Ministry of State Property who was present advised: "And you declare it obsolete and sell it."

In Soviet times, they were preparing for any war: positional, nuclear, hybrid, guerrilla. What are we ready for now?

Everything that is available is gradually being drawn into military operations in Syria. The only aircraft carrier Admiral Kuznetsov is in a hurry, periodically shooting Calibres delivered to positions almost directly from factory workshops, Tu-160, of which only a dozen and a half, arrive from the Volga. And this is understandable: if they took it, they must win. Well, how will the conflict happen more serious than the Syrian episode? Do we have someone who is counting on all the options for the development of events, or is the consumption of ammunition taken from the ceiling?

So how many shells do we need? Before that terrible war, the well-known ammunition V.I. Rdultovsky addressed the government with a letter “On the defense of the country” in which he asserted that only in the first year of the war 100 million 76 – 107-mm caliber and 60 million larger ones should be stockpiled. Instead, 160 millions managed to lay in the stock of all 88 millions.

Nowadays, the situation with slug production is much worse: then it was on the rise, today - in a deep crisis. Both in the society and among the officials, the opinion has taken root that the Soviet "defense industry" has done so many shells that it will be enough for their age and still remain. And others believe that the shells are not needed at all.

Storage times are assigned by developers with a large margin. In 30-s, Vasily Grabin created a cannon for firing projectiles left from the First World War. In his memoirs, the famous designer wrote: "In artillery, the duration of ammunition storage was set to 25 years, and even after this period they must serve without fail."

Twenty-five years have passed since the day of the termination of the state order to shell plants. And what?

Once in India, they suddenly realized that armor-piercing and sub-caliber shells for tanks Russian production is sorely lacking, which leaves almost two sets per car. For some time, it was as if negotiations were even conducted with Israel, which, it turns out, is today occupying a position higher than Russia in the projectile market. They did not agree on something, and then the Indians in 2011 turned to us. In April 2014, Rostec (NIMI) signed a contract for the supply of 66 thousand BPC "Mango" and the organization of licensed production from the buyer.

I don’t know how the contract is being fulfilled: I didn’t ask THITI for machines made in India. And where else to get, except that the St. Petersburg technological chain to disassemble and send? In any case, Indian tanks are starving. Imagine how quickly these two ammunition sets will leave, if India has a war with someone from its neighbors. And our situation is more complicated, because we do not get out of military conflicts. And any of them is fraught with a big war.

What "Mango" give, it is not surprising - "Armata" focuses on the "guy." But this is a new production, and a large size, rather than required by the buyer.

At the same time, in the 2006 year, the German Gref's office intended to sell the state-owned TNITI stake, which owns all the ammunition technology, under auction.

For the "Guy" TNITI should provide machines for the new production of shells 152-mm shells. Here his TM is truly indispensable. Someone will object: they did the same shells during the war on what was. This is not at all true, and even not at all. Stalin sensibly used the pre-war Soviet-German treaty, which modern historians dislike so much. In 1940 – 1941, the Germans supplied us with 6430 machine tools, including the multi-cut GSAB-2 from “A. Wirth, designed for rough machining of shells in caliber from 100 to 250 millimeters, four-spindle special semi-automatic machines VGDm-1 and VGDm-2 for processing the ends of artillery mines (boring, face milling, threading SNNNXX and NTNNXX and NTNNXX and NTNNXXNHM) three-spindle thread-milling machines ADFG-Ш of “Hasse-Vrede”, designed for processing points and threading in the shell of the projectile, and others.

But even before that, machine tools had been supplied from foreign countries, for example, 1939 was received in one 3458 year. I think the lion’s share of them went to the production of ammunition. And half a century later, I met these machines in the shops of factories. Hitler did not think that the machines delivered would have time to serve the creation weapons our victory.

There is also a difference in the position of the production of the shell before that terrible war and now. Then we bought the necessary equipment from Germany, which was in confrontation with the rest of the West, but now it is a member of NATO and will not sell shell tools.

This is the main artillery, and now tank, projectile. The main one, firstly, because it can destroy a serious fortification at a very decent distance, secondly, because it is the smallest projectile into which a nuclear charge is placed, and, thirdly, due to the fact that ammunition niche for distances of several tens of kilometers is much cheaper than a rocket.

It is also high time to think about the fact that in our age it is not possible to rely on electronics in everything. Today, the defense is reliable only when it relies on the god of war - artillery, provided with a sufficient number of shells.