The problems associated with military service in high latitudes were discussed at the Army-2015 international military-technical forum. A number of conclusions reached by experts deserves special attention.

The natural conditions of the Far North (Arctic) are a long period of low air temperature, extremely unstable weather with abrupt changes in atmospheric pressure, strong winds, a negative annual balance of solar radiation, an increased level of exposure, the likelihood of oxygen starvation. The combined effect of these factors reduces the functional and immunological reactivity of the body, contributes to neuro-depressive disorders, leads to cardiovascular diseases.

Take care of the microbiota young

According to Valery Danilenko, Head of the Department of the Genetic Foundations of Biotechnology, NI Vavilova, a long and intense process of adaptation of servicemen to the conditions of the North leads to a profound reorganization of physiological and metabolic processes, homeostasis as a whole, which is accompanied by the emergence of the so-called polar tension syndrome. This is not a disease, but an organism's response to factors of high latitudes, that is, a complex of pathological reactions, manifested by some violation of higher nervous activity, respiratory functions, blood circulation, and thermoregulation mechanisms. Unfortunately, the majority of military personnel, including officers, have little idea about this, as well as about what the Far North really is.

The polar night, as a rule, causes a person to feel unwarranted anxiety and tension. Among the consequences of depression, drowsiness, reduced immunity, activation of various diseases.

The adaptation period is characterized by a strong, pronounced voltage compensatory-adaptive mechanisms. This is caused both by the external environment and by changes in the habitual way of life, the nature of food, the conditions of service and work (rotational method). There are grounds for assessing the state of the human body arriving in the North as a very specific chronic tension, which further leads to the development of failures at the level of various, primarily regulatory systems (nervous, endocrine, immune). Then follow the secondary manifestations: intestinal dysbiosis, neuro-depressive disorders. There is a high probability of developing chronic irreversible diseases: cardiological, neurodegenerative and others.

Obviously, the study of the microbiome (microbiota) is a promising global direction that has arisen through the use of the latest technologies and conceptual approaches based on the interdisciplinary integration of medicine, molecular genetics, microbiology and bioinformatics.

The intestinal microbiota, for example, is currently interpreted as a new endocrine organ, which plays a key role in the formation and maintenance of human immunity, the general homeostasis of a person, including the formation of his neuropsychic and behavioral characteristics. Prolonged microbial imbalance can lead to the development of the metabolic syndrome, weakened immunity, and correlates with the manifestation of various autoimmune and mental diseases.

Despite a well-established link between stress and mental disorders, the mechanisms that lead to pathological changes are not well understood. For the first time, stress was described more than half a century ago and was defined as an acute threat to the homeostasis of the body. Adverse events, whether it is a real threat (physical stress) or its expectation (psychological stress), cause a cascade of physiological, emotional and behavioral reactions that allow a person to adequately cope with the situation. Nevertheless, serious chronic and uncontrolled stressors can affect the functioning of the brain, as well as cause changes in its structure, which can have long-term consequences for a person’s physical and mental health.

Wounded mannequins and the latest hemostatics

Analysis of the regulatory framework for medical and hygienic support of work in the Arctic, a comparative assessment of their practical implementation, taking into account the experience of developing the northern territories, allow us to develop a system for assessing occupational risks. Its main elements are: 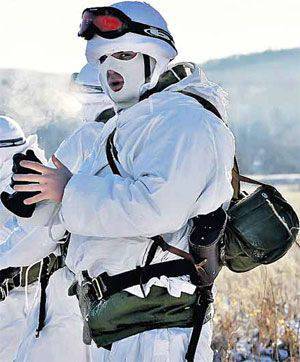 - Glossary of unified terms and definitions used in occupational health and health care;
- legislative and regulatory documentary base;
- principles of identifying occupational hazards and risks;
-requirements to the organizational structure of medical, hygienic and psychological support in the performance of official tasks.


Ultimately, a risk assessment matrix should be built, which can serve as a basis for decision-making in the management of military teams. In particular, we are talking about promising means of pre-hospital medical care in combat surgical trauma.

Nowadays, new highly effective methods of temporary stop of external bleeding have been developed, which, naturally, can be used not only in the conditions of the Arctic. This is a twist bundle for self- and mutual assistance (“Medplan”), an automated hemostatic electron-pneumatic plait (“Medtechnika”), a clamp for temporary clamping of the main arteries (“Special and medical equipment”). For a temporary stop of intrapelvic hemorrhage, an antishock pelvic bandage (“Special and medical equipment”) is used. Experimental samples of disposable sets were created to eliminate strained and open pneumothorax (Novoplast). The method of temporary intracavitary hemostasis with the introduction of hemostatic preparations compositions into the abdominal cavity is being experimentally tested.

Work is underway to create an individual monitoring of a serviceman, providing continuous recording and analysis of changes in basic physiological indicators. The developed technique is the basis for making an objective decision on the priority of removing the wounded from the battlefield and providing them with medical assistance (remote sorting). Further transportation of the wounded with intensive therapy is provided by multifunctional evacuation-transport devices.

Means of deployment of field medical units and units should be used differentially, depending on the tasks assigned, the combat situation and the timing of work. With short-term deployment (up to several weeks), the use of pneumatic frame tents is optimal. In the medium term (up to a year), all units or the most important ones, such as operating rooms and intensive care units, should be deployed in mobile modules of constant and variable volume. With the planned terms of stationary work for more than a year, it is necessary to place as soon as possible medical units in modern pre-fabricated frame structures.

The “Institute of Engineering Physics” said its word in this direction. In particular, this concerns the use of samples of life-support systems with local heating to provide medical care to the wounded (injured) in the performance of training and combat activities. The relevance of this work is explained by the need to ensure a long stay of personnel in comfortable conditions at low ambient temperatures without deteriorating the ergonomic characteristics of the main equipment.

At the moment, the Institute of Engineering Physics is conducting research in several directions.

Equipment for heating the diver is thermal underwear, consisting of a T-shirt and pants, on the inner surface of which there are wires resistant to fracture and wear, distributed according to a special technology, which allows the laundry to fit snugly to the body without creating a tensile force on the heating element, which is a mylar thread with a thin layer of resistive metal. Power - 80 – 85 watts, weight with a set of batteries (AB) - no more than two kilograms, while working without changing AB - no less than two hours.

The equipment for heating the special forces personnel was developed in accordance with the recommendations of the specialists of the Ryazan Higher Airborne Command School, soldiers of the special forces units of the 45 regiment of the Airborne Forces and is thermal underwear consisting of a T-shirt and shorts. Heating wires are fixed on the inner surface, laid out in such a way as to not cause inconvenience to a soldier in carrying out the task in full military uniform (ballistic suit, body armor, unloading systems, etc.). Power - 35 – 40 watts, weight with a set of AB - no more than two kilograms, the operating time - five to six hours. Heating modes are switched in the 20, 40, 60 and 100 range of power percentages.

The equipment of the heating of servicemen of combined arms units consists of a vest and elements for arms and legs. The design provides operation in various combinations. The heating elements are placed in special pockets, which allows you to dismantle them together with switching wires. The power of the heating system is 80 – 85 watts, the mass with the AB kit is no more than 3,5 kilograms, the modes are 20, 40, 60 and 100 percent of power.

The Arctic footwear with electrical heating is a joint development with CJSC Faraday based on the B13 model using an LIA-4 battery manufactured by Energia.

The device for heating the foot includes a multi-layer insole with an electric element equipped with contacts, a small-sized power source with a presence sensor and a conductor. The heating element is made of polyester filaments with resistive deposition of silver, and to increase the efficiency of the insole, a reflective layer of aluminum film is included in the insole.


Tests of samples of heating systems for combat equipment were carried out in the 45 th regiment of the Airborne Forces and the Ryazan Higher Airborne Command School.

Today, in the Russian Federation, own funds and medical preparations have been created that significantly increase the combat sustainability and effectiveness of the actions of special units in the Arctic. In some cases, this experience can be extended to line units and units of the Armed Forces.