The death of the Russian Su-24 bomber in Syria was, objectively speaking, inevitable. This means, of course, not a specific aircraft, but an incident of this kind in general.

The fact is that Russia, having begun to fight in Syria, stepped on the interests of too many countries. First of all, these are the creators and “general sponsors” of the “Islamic Caliphate” (or “Islamic State”) banned in Russia - Turkey and Qatar. Of course, in words they too are “fighting terrorism”, but their true role in the Syrian conflict is not even a secret to Polichinel’s secret (Saudi Arabia, of course, is also not entirely aloof, but it still supports its old generation more - Al -Kaidu "and its derivatives, which for the" caliphate "competitors, not allies). The joint business of Ankara and the “caliphate” is no longer a secret: Turkey buys oil from it at dumping prices both for the domestic market and for re-export at world prices. After the Russian planes began to purposefully shoot fuel trucks, Turkey simply could not respond. The answer was the destruction of the Su-24. Ankara is also probably seriously afraid that the French president will be able to achieve the creation of an anti-Caliph coalition, and with the participation of Russia, which is completely unacceptable for Turkey. Finally, not least (and even first) Erdogan was enraged by the fact that Moscow had broken his ambitious geopolitical plans, among which the overthrow of Assad was in the first place: Ankara had already made great efforts for this and spent considerable resources, which, although would partially planned to "repel" by Caliphat oil.

The circumstances of the incident leave no doubt that the plane was shot down intentionally and purposefully, and this operation was carefully planned. Even if you completely believe the Turkish version of events and ignore the Russian one, the bomber was in foreign airspace for less than a minute. During this time, the Turks would not have time to raise fighters, that is, the machines were raised in advance to organize an air ambush. Su-24 did not go deep into the airspace of Turkey, which could really be regarded as a threat, but parallel to the border, cutting off its overhang. Thus, only by entering its airspace (if it really was), he immediately left it, knowingly not carrying any, not even a local threat. Moreover, he was in Turkish airspace (again, based on the Ankara version) so shortly that F-16 launched an attack on the Su-24 when our bomber was still over Syria, and completed when it was already over Syria that is, the actions are absolutely illegal. During the period after the end of the Second World War, there were thousands of such “cutting protrusions” and “strikeings along the border” on all continents, but no one even knocked down formal violators even at the height of the Cold War. A pattern of behavior was demonstrated these days by Israel, in whose airspace the Russian Su-34 flew for a few seconds. The Jews stated that the plane obviously did not carry any threat to their country, so there was no need to shoot it down.

It is also clear that the Turkish pilot did not just warn the Russian people about anything, but did not turn on the onboard radar, because in any of these cases (either hearing a warning or registering the enemy’s radar itself), the Russian aircraft would immediately turn south (obviously with a decline) to get away from the attack. Therefore, the F-16 went into the rear hemisphere of the Su-24 for visual visibility to launch a rocket from the IK GOS and, therefore, knew perfectly well that it was Russian airplanes in front of it. The described scenario is the only possible, we repeat, even if we proceed from the Turkish version of the trajectories of the aircraft participating in the incident. 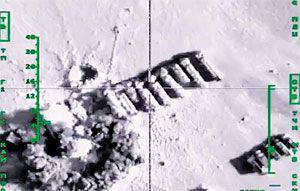 Accordingly, there is no talk of any “protecting the sovereignty of Turkey”; there is a planned action to destroy the Russian bomber. Ankara herself admitted this because no other conclusions could be drawn from her own version. In the year before, and even in the last century, for Russia this would be perfectly legal casus belli.

The reaction of the Russian leadership to what happened is somewhat surprising: it seems that it did not really expect such a step from Ankara. With that, she was well aware of the aforementioned open secret secrets. One could not but know that on all fundamental geopolitical issues (not only Syria, but also Crimea, the situation in the South Caucasus), Ankara’s position not only does not coincide with Moscow’s position, but directly opposes it, and Turkey’s complicated geopolitical game of creating a new Ottoman empire goes against the interests of Russia. Apparently, in the Kremlin they seriously believed that gas pipes, tourism, and some anti-Western Erdogan frond make us partners and almost allies. Because of such an amazing blindness of the political leadership of the country, the command of the Russian group in Syria made a gross mistake: it was obliged to provide escort fighter planes operating near the Turkish border, especially since they are in place (4 Su-30). If this accompaniment had been, no attack from the Turks would definitely have happened.

Now Moscow is demonstrating a total “insight” about the actions of Ankara. It is expressed in a very tough form, so I really want to believe that it will not be possible to “blind” back and the game of “union” with Turkey will end at least for the foreseeable future (it is especially desirable to bury the insane Turkish Stream project). The obvious opponent is finally recognized as such. Well, better late than never. I would very much like to see a similar “insight” in relation to Saudi Arabia and Qatar. Although, probably, it is impossible to demand the impossible. It is even more naive to expect a similar “insight” about China, which just these days created a consortium with Turkey, Georgia and Azerbaijan to transport their goods to Europe bypassing Russia. It is assumed that next year Ukraine will join this four.

The question arises whether a full-scale military clash between the Russian Armed Forces and Turkey is possible. The military potential of the latter is considered in sufficient detail in the article "In a close bloc with the radicals." The Turkish army is very large, quite well trained, resistant to losses, but most of its military equipment is very outdated. The most modern models that can cause problems for the Russian Armed Forces include 72 American ATACMS tactical missiles (the MLRS for them are MLRS) and at least 100 of their own J-600T, copied from Chinese B-611, 354 German tank “Leopard-2A4”, 15 American MLRS MLRS (227 mm) and 80 T-300 “Kasyrga” (the latest Chinese WS-1, 302 mm), 240 of those same F-16 fighter-bombers (181 C, 59 D), 14 submarines of project 209 of German construction and eight German frigates MEKO2000. Also in this row, mention should be made of the Turks' Russian anti-tank systems "Competition" and "Cornet", MANPADS "Igla".

Absolutely, however, it is obvious that if Ankara decides to deliver even a limited strike on Russian troops and forces in Syria, the answer will be to the territory of Turkey itself, and a very large-scale one. Most likely in Ankara this is already realized. Therefore, the destruction of the Russian bomber actually destroys the long-standing idea of ​​Turkey to create a “liberated no-fly zone” in the north of Syria. Russia knowingly does not recognize this zone, extending to it hostilities (including against the Turkish Armed Forces, if there are any). Moreover, the deployment of a C-400 to Syria, which already allows us to create a very real no-fly zone over almost the entire territory of Syria, while a considerable part of Turkey is also within the radius of destruction. This radically changes the whole military situation. Erdogan’s statements that he would regard the destruction of Turkish aircraft over Syria as aggression against Turkey are quite astounding from the point of view of international law, but will almost certainly remain empty words.

The incident with the Russian aircraft once again underlined the absolute virtuality of the current NATO. It has already fully manifested itself in the situation with Georgia and Ukraine, but it could formally be attributed to the fact that these countries, despite their unconditional pro-Western orientation, are still not members of the alliance, and the organization does not bear legal obligations to them. Turkey is a member of NATO, while its Armed Forces are second in combat potential after the US. In recent years, Ankara has been very free with its membership in the alliance, but knocking Su-24 down, immediately remembered him and demanded protection. The answer was absolutely expected, more precisely - the only possible one: NATO expressed verbal support for Ankara and suggested that she herself should solve her problems in relations with Moscow. And the point, of course, is not that Washington and Brussels understand what was mentioned above: the Turks shot down the Su-24 intentionally and purposefully. The fact is that today the alliance is incapable of a serious war (and the war with Russia is the most serious possible). Accordingly, even if Turkey receives blows on its territory, no one will save it (the pretext will be exactly that it ran into itself).

In conclusion, I would like to say about the reaction of some Russian politicians, experts and journalists (almost exclusively liberal) to the sanctions imposed against Turkey. There were statements that these measures would hit ordinary Russian people (they would not be able to buy Turkish tomatoes and rest in Antalya using the all inclusive system) and that politics should not be mixed with economics. In this regard, it is impossible not to note: the confusion of politics with the economy was introduced into world practice a long time ago by Western countries. They (first of all, naturally, the United States) repeatedly imposed economic sanctions against various countries in order to achieve political goals (one and a half years ago, precisely such sanctions were imposed against Russia). As for tomatoes and Antalya, by buying Turkish goods and services, we are financing an army that deliberately and treacherously kills our servicemen.

Of course, one can regret our people who, after the Soviet total lack of everything, have seized upon at least something and are now very afraid of losing it, although the Soviet Union has been around for almost a quarter of a century. Still current история with anti-Turkish sanctions and reactions to them, some of the fellow citizens show the extent to which a consumer society destroys some people’s mind and soul at the same time.

Ctrl Enter
Noticed oshЫbku Highlight text and press. Ctrl + Enter
We are
Revealed the secret of provocation in the American BostonInterview by President Bashar Al-Assad to the Sunday Times
Military Reviewin Yandex News
Military Reviewin Google News
123 comments
Information
Dear reader, to leave comments on the publication, you must to register.