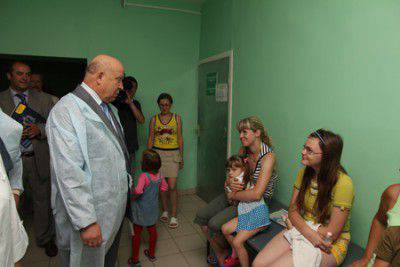 Dear readers "IN"! I want to share my thoughts about what I saw on REN-TV on the evening air.


News not from the category of popular. Not about Syria, not about Ukraine, not about how our defense industry launched another sample of super-weapons. At first glance, even the fact that the “VO” regulars are interested has nothing to do with it.

However, in order. The plot of the Nizhny Novgorod hospital. Nizhny Novgorod is a city with a population of one million, there are many defense enterprises there. TV presenter broadcasts: “Children's departments in hospitals in several Russian regions have been closed. Now children and adults lie in the same wards, despite their diseases. Doctors call change compaction and optimization. In the Navashinsky central regional hospital, young mothers are afraid to go into the hospital corridor because of possible re-infection. The head physician of the clinic justifies that such measures are necessary in connection with the austerity regime. Utility payments are growing, and to keep large areas unprofitable, and wards in and the treatment space has been optimized. Doctors do not hide the fact that they are waiting for new changes. The staff at the Navashinskaya hospital have already warned that wages will be cut again in order to save. But they advised those who disagree to get ready for dismissal. "

Next footage from the bottom. A good-looking (like most of the heads of institutions in Russia), the head of the office without much tragedy and frustration, routinely reported about the next “optimization” of her institution (quite possibly, one of those who advised to prepare for dismissal dissent). Well, there is not enough money for the children, what can we do about it ... And then about housing and utilities tariffs: the tariffs have grown, they say. You have to save on everything. (Children - is that the same thing?).

And here the same feeling of resentment for the country and aversion to the bureaucracy, which looks at the President’s messages to the Federal Assembly, but does everything in its own way, again appears. I will make a reservation right away: I personally support the foreign policy of the country, but with such assistants of domestic issues no state leader can be calm behind the rear.

Inhumane plant? Yes, yes, not 1937 year. Do not imprison everyone, only for criminal offenses. But incompetent optimizers drive in three necks from posts. Do not put experiments on children. These are future soldiers, defenders of the state that is now rising from its knees. A lot of unreasoned and unpopular measures (starting from the Unified State Examination, ending with Plato) begin to stir up society in difficult times. The housing sector in general, in my opinion, should be the monopoly of the state. Because 100% of the country's population depends on it. And the military. And those who feed them, arms, treats. And, of course, families and children.

It seems that half of those who should help the president in resolving such issues are paid by the US State Department. This, of course, emotions. Most likely, the parochial thief took away communal funds, and the officials didn’t have enough intelligence for anything other than optimization. However, if not the FSB, then law enforcement officers have more reason to check for something.

Dear Vladimir Vladimirovich! Stop the thieves, remove the dumbassies from the high-ranking armchairs! And our Russian people will turn such mountains that no one else can do it. I want to believe that not immediately, but it turns out!

Ctrl Enter
Noticed oshЫbku Highlight text and press. Ctrl + Enter
We are
A great interview with Sergey Lavrov: about Ukraine, Obama and IranWhat you didn't want to know about England
235 comments
Information
Dear reader, to leave comments on the publication, you must to register.