December 10 2015
9
At the end of November, the Turkish company Aselsan received an order from the military department for the supply of a number of active protection systems (KAZ) of the AKKOR type of its own design. These systems are supposed to be mounted on promising main tanks Altay, which should go into mass production in the foreseeable future. In addition to tank KAZ, Turkish specialists are developing similar systems for other equipment. Back in the spring, a preliminary design of the AKKOR Lite complex, designed for light vehicles, was presented.


The new active protection complex AKKOR Lite (Aktif Koruma Sistemi Lite - “Active Protection System Light”) should replenish the Aselsan product line and help it gain a foothold in this sector of the arms market. As part of this project, it is planned to create a small-sized and lightweight system suitable for installation on armored vehicles, etc. technology, which will significantly increase its survivability on the battlefield. Such project goals are of great interest. A considerable part of military equipment, including light armored, is capable of withstanding shelling from small arms weaponsHowever, it cannot withstand anti-tank grenades or missiles. KAZ AKKOR Lite, allegedly, will be able to close this gap in protection.

The basic KAZ AKKOR, originally intended for relatively heavy armored vehicles, for certain reasons, cannot be mounted on armored cars and other similar vehicles. The main reason for this is too large dimensions and weight of individual elements of the complex. In addition, the use of mobile launchers, firing protective ammunition, may be redundant for such carriers. As a result, it is proposed to use a different architecture of the complex, which will provide high protection performance and an acceptable structural weight. 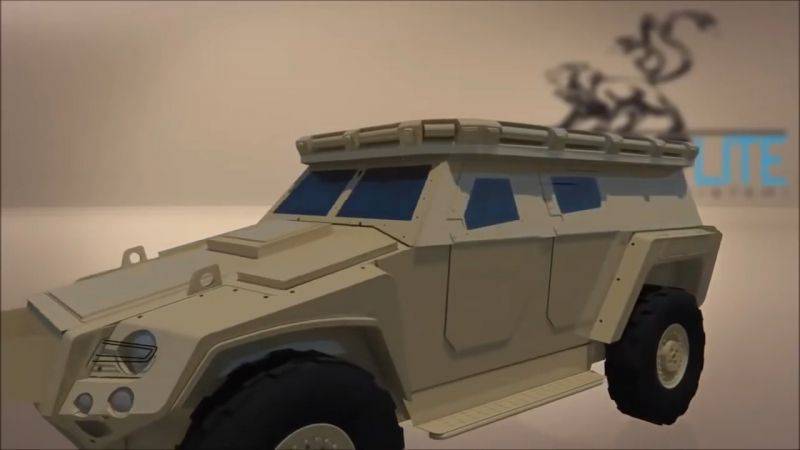 General view of KAZ AKKOR on an armored vehicle. Shot from the commercial

It should be noted, in terms of concept and overall architecture, KAZ AKKOR Lite is not a revolutionary new invention. Back in 2011, the first information about the promising KAZ from the Israeli company Rafael was published. The Trophy LV system developed by her was intended to be installed on light vehicles that cannot carry a full-fledged Trophy. Instead, it was proposed to use a special design with a set of necessary equipment installed on the roof of the armored vehicle. Due to the radical processing of the architecture, the total weight of the complex was reduced to 200 kg.

Apparently, Turkish specialists are well acquainted with the latest Israeli developments, which is why their new project AKKOR Lite has a lot in common with Trophy LV. This system should have a similar architecture and, probably, work according to the same principles. Thus, the company Aselsan took up the development of ideas created by foreign experts. What will be the result of such borrowing - time will tell.

The AKKOR Lite project involves the use of not separate components, separated into different parts of the base machine, but one frame with a set of units. On the roof of the base armored car or car is proposed to mount a large frame with the necessary equipment. On its perimeter should be placed small antenna surveillance radar and intercept equipment. The control automation unit is probably proposed to be placed inside the base machine. 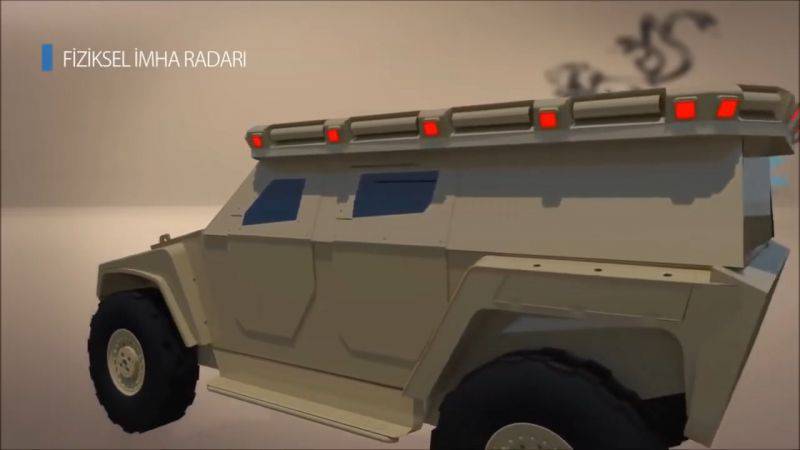 The location of the elements of the radar (highlighted in red). Shot from the commercial

To detect potentially dangerous objects that can be identified as an anti-tank grenade or a rocket, it is proposed to use a large number of small radar antennas distributed around the perimeter of the KAZ frame. With relatively small sectors of the review, such antennas due to their large number can provide a circular view, or minimize the existing dead zones.

It is proposed to install launchers for protective ammunition between the elements of the radar station. Externally, they should be narrow and long boxes, installed with a slope to the vertical. In this case, their lower sections are proposed to be directed away from the base machine, thereby slightly diverting from it the zone of destruction of a dangerous object.

The type of ammunition proposed for the destruction of flying targets has not yet been specified. As part of such a system, you can use various types of protective ammunition, although the most obvious solution is explosive fragmentation devices installed directly in the corresponding KAZ compartments. Such munitions are capable at the right time to create a dense field of fragments, destroying or destroying the flying object. 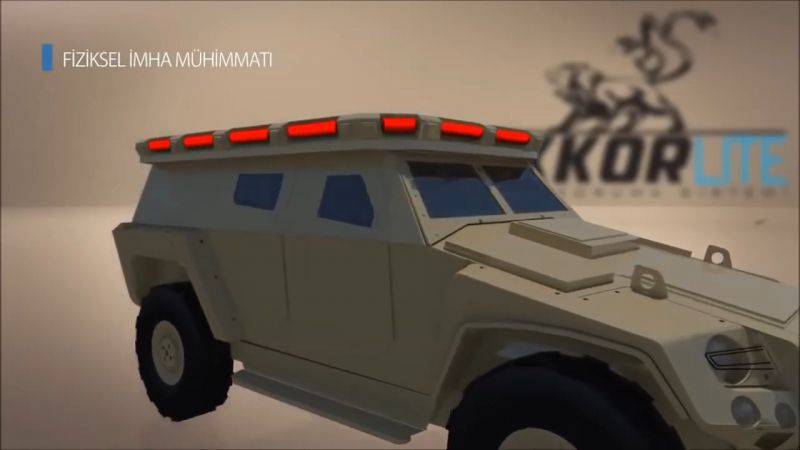 The location of the protective ammunition (highlighted in red). Shot from the commercial

Being in some way a rethinking of the Israeli Trophy LV complex, the Turkish system probably should have a similar work algorithm. In the working position, the automatic equipment of the AKKOR Lite complex must independently and without human intervention monitor the environment, producing the detection of various high-speed objects. When detecting an object of sufficiently large size, moving at high speed, the automation should give a command to fire one of the protective ammunition located along the perimeter of the roof of the combat vehicle. In this case, the defeat of the target is carried out on the approach to the car, but at a minimum distance from it.

The proposed construction of the AKKOR Lite support frame protects the base machine from attacks from all angles. Possible defeat of anti-tank grenades and missiles, as well as some other ammunition. The main performance characteristics of the promising KAZ, even if they were calculated, have not yet been published, and only some advertising materials with the most general information are freely available.

In the proposed form, the "light" complex of active protection of the Turkish development is of particular interest. The main positive feature of the project can be considered the possibility of installation on light armored vehicles or armored cars that are not capable of carrying full KAZ. In addition, protection from attacks from all angles, the lack of operator control, etc. can be noted.

Nevertheless, like other developments in this and other areas, KAZ AKKOR Lite is not without flaws. One of the main ones is a specific layout, representing a potential threat to the carrier vehicle and its crew. Protective ammunition is proposed to be placed directly above the roof of the car body, because of which the stream of fragments must pass in the immediate vicinity of its structure. This means that when the ammunition is triggered, part of the fragments may fall into the sides, stern, glazing or other elements of the machine with the risk of their penetration and destruction of the crew. 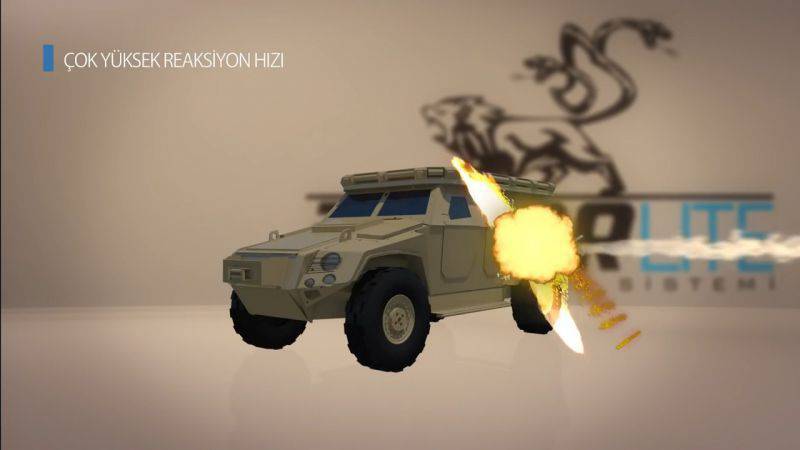 Demonstration of actuation of protective ammunition. Shot from the commercial

In addition to single pieces of the base machine, fragments of flying ammunition threaten. It is proposed to intercept it at a short distance, because of which some fragments, preserving the kinetic energy, can reach the car and damage it. In addition, it is possible to undermine the warhead of the projectile with similar consequences for the armored car. It should be noted, in this case, the latter can be damaged by a blast wave and fragments, and not from a cumulative jet. However, in this case, the damage to the machine can be quite serious, and the destruction of the crew is also not excluded.

In the context of the destruction of the armored vehicle by shrapnel of protective ammunition, the front of the KAZ should be considered separately. The published animated video shows the armored hood layout, with the front interception munitions located above the windshields. When they are undermined, the fragments will be directed forward and downward, i.e. in the hood and to the engine. It cannot be ruled out that after such a “defense” the car will simply lose its course.

A noticeable disadvantage of some active protection complexes that currently exist is limited ammunition, "tied" to certain sectors. In the case of the AKKOR Lite system, this means that if a rocket or grenade hits a certain sector, it will trigger the corresponding protective ammunition, after which this sector will remain unprotected. Naturally, in real conditions, the lack of protection of one or several sectors is unlikely to immediately lead to fatal consequences, but such a minus of the complex must be taken into account. It is noteworthy that the “full-fledged” KAZ AKKOR does not have such a problem, since the launch of protective ammunition is carried out using rotary launchers.

At the moment, only known about the existence of a preliminary version of the project Aselsan AKKOR Lite. Information about the assembly of the prototype system and its tests are not yet available. Probably, the company-developer, recently completed the main work on the AKKOR complex for heavy armored vehicles, recently started developing a new version of the KAZ, and therefore cannot yet boast any noticeable success. 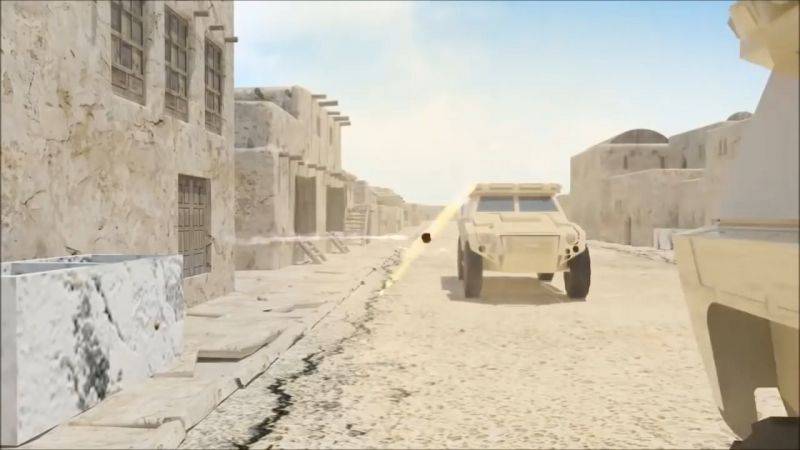 Demonstration of actuation of protective ammunition "in real conditions". Shot from the commercial

The absence of any characteristics, as well as the presence of the project in the early stages, do not allow to draw full conclusions about the possibilities and prospects of the new Turkish complex of active protection. So far, one can only consider a few published materials and make some predictions based on information about other similar projects.

What are the prospects for the system AKKOR Lite - while it is difficult to say. In the animated demonstrations, the operation of the complex looks easy and simple, and the system itself has no problems. However, upon closer inspection, you can see that it is not without flaws. Moreover, a number of noticeable problems or, at least, ambiguous features are directly related to non-standard architecture and installation of all units on the roof of the car carrier.

Due to the obvious lack of a finished project, the assessment of the new Turkish development is difficult. It can be argued that it is of interest, at a minimum, as a representative of the so far not numerous class of light active protection complexes. At the same time, however, technical interest cannot yet be satisfied with the available materials. Probably, at the future exhibitions of weapons and equipment, Aselsan will show mockups or even full-fledged samples of KAZ AKKOR Lite, as well as announce information about them.