Tatarstan as one of the goals of "friends of Russia"

December 9 2015
144
On the portal EurAsia Daily A few days after the Turkish attack on the Russian Su-24M bomber, the material of political scientist Ayrat Galimzyanov came out under the heading “Russian-Turkish conflict and Tatarstan: who are you, President Minnikhanov?” The author of the material is inclined to say that the authorities of Tatarstan do not want to take the path of confrontation with Turkish "partners", and therefore no harsh statements about Ankara will not allow themselves. According to the author of the material in the above-mentioned source, the leadership of the Republic of Tatarstan, through controlled mass media, is trying to promote the idea that pragmatic cooperation with Turkey is better and more effective than sanctions and other restrictive measures that the Russian Federation is taking against Ankara, even in spite of frankly dastardly stab in the back, as was the case with the Su-24, was named by Russian President Vladimir Putin.


Airat Galimzyanov writes that in Tatarstan about 26% of all foreign investment projects are Turkish, and therefore even when civilian activists decided to organize an action at the walls of the Turkish consulate general in Kazan after a Turkish strike on a Russian plane, at some point they tried to disperse the people gathered for expression protest against the actions of the Turkish authorities. Ultimately, overclocking did not take place, but, as they say, the fact itself ...

Representatives of the republic’s business are also not ready to abandon economic relations with Turkey, apparently believing that the incident in the skies of Syria and the death of Russian military personnel is not something that could harm bilateral contacts. At the same time, some representatives of big business in the republic believe that a kind of “patriotic hysteria” is being pumped up in Russia.

The article contains a statement by the chairman of the Tatarstan Chamber of Commerce and Industry Shamil Ageyev:
Tatarstan needs to maintain friendly relations with Turkey. (...) Forcing the atmosphere of the so-called “patriotic hysterism” is not so correct.

The same Ayrat Galimzyanov, in his material, reports that in Tatarstan local radicals from the number of Islamist organizations and other pseudo-patriotic structures feel quite freely. 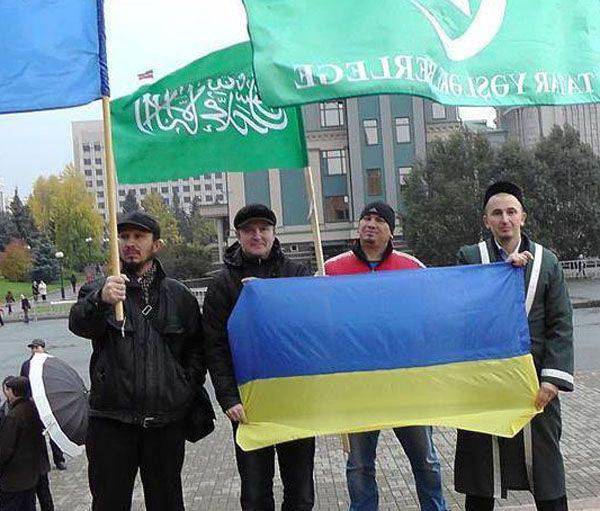 Of course, those who, being regional officials (and not only, apparently, regional) level, tend to whisper about the fact that the counter-terrorist operation in Syria, they say, was generally started in vain, that it was necessary to sit quietly and quietly, not to annoy Western (or the same Turkish) partners, lacking not only in Tatarstan. And their frost-bitten from among the pseudo-religious fanatics, in addition, obuyannyh ideas of ultra-nationalism, there is not only in Kazan, Naberezhnye Chelny and other major cities of the Republic of Tatarstan. Enough of such and in Moscow, and in St. Petersburg and, as they say, on the periphery.

At the same time, it is difficult not to notice that for some time Tatarstan has become a kind of Internet target for all sorts of large, medium and small extremist groups that publish materials in the network, which are expressed in attempts to destabilize the situation in a fairly prosperous republic. And the authorities of the republic, by definition endowed with the powers to protect the constitutional order, should pay attention to this in order not to allow an extremist conglomerate to solve its destructive tasks, using a relatively timid official position. One would like to hope that the official position in this respect looks shy only externally, and that in terms of confronting destructive ideas in the republic, everything is said to be grasped.

Further, if so to speak, purely information for reference.

So, as already noted, a considerable number of groups divorced in social networks, whose organizers have as their goal a clear shaking of the situation in the same Tatarstan. They do not show themselves loudly, however, it is difficult to call this activity very quiet. Attention is drawn to, for example, the fact that some groups dedicated to political processes in the Republic of Tatarstan broadcast exclusively in foreign languages.
So, on Facebook, there’s a group called Free tatarstan (link for obvious reasons, the "VO" is not given), "informing" users in German. The group is not particularly eager to hide the focus of its activities, and this activity is revealed in the abstract, looking (in translation) as follows:

Tatars (Turkic people) and other minorities in Russia have been suppressed for a long time, terrorized and systematically exterminated!

Further, the authors of this group of openly extremist sense are followed by a call for “the liberation of Tatarstan”. In general, I see ...

Among acquaintances, there are quite a few Tatars who declare that this kind of crazy propaganda about the “systematically exterminated Tatars in Russia” has been raining for more than a year. At the same time, the use of a foreign language indicates that the appeal does not go to the Tatars, who in the vast majority perfectly understand the absurdity of the above statements, but to the foreign absorber of media content.

Question: Why is it that the German language was chosen for broadcasting lies with obvious extremist overtones? In principle, in the group itself this is indirectly explained. The “creative team” of the group on the social network talks about 10 to millions of Russian citizens with Turkic roots who “need to start liberating.” Given the fact that most of the refugees come to the same Germany through Turkey, as well as the fact that millions of Turks live in Germany (the second largest ethnic group of the Federal Republic of Germany after the Germans themselves), the group "as if hints" who can be used to loosen the situation in the same Tatarstan.

The Facebook group talks about the need to “necessarily support” Muslims in Tatarstan, because Muslim rights are “infringed” at every step ...

However, as it turns out, the extremist Facebook game has not only European subscribers. Under the slogans of the grouping, some citizens of the Russian Federation, including residents of the Republic of Tatarstan, also post their posts in the network. This is a whole hornet's nest, settled in a social network and working in one direction. There are residents of Naberezhnye Chelny with university manners in it, there are Kazanians, Ufimtsy, Muscovites. Moreover, all this camarilla goes to the notorious Djemilevsky "Majlis", which becomes yet another proof of foreign financing of this destructive process based on the internal Russian radicals.

There are many names, and these people willingly share their "success" on the web. So, for example, it is told about how “teachers from India on dogma and Muslim law are invited to Kazan for lectures in Arabic among the imams of the Volga Federal District”. Imams, it turns out, are provided with full board - if only they would come to a meeting with Arabic-speaking Indian teachers ... The main thing is lectures in Arabic ... In Tatarstan ... You can only guess what exactly the lectures are about.

All this to the fact that at one far from perfect moment we are amused how this very easy DAISH managed to recruit Moscow student from Moscow State University Varvara Karaulov, or how an imperceptible guy from Noyabrsk suddenly found himself in Syria and turned into a hangman of a terrorist group. Yes, just like that — through the same uncontrolled groups in social networks, there is a stream of anti-Russian propaganda, under the rink of which not only people with dubious biographies and quite successful citizens get with prosperity, good education, and knowledge of their business.

Only one conclusion: do not yawn. Neither in Kazan, nor in Chelny, nor in Noyabrsk, nor in Moscow! Any yawn is, in essence, a human life - today or tomorrow. Are there too many lives of Russians who took the soul catchers using extremism as an ideology of contention? ..

Ctrl Enter
Noticed oshЫbku Highlight text and press. Ctrl + Enter
We are
Results of the week "I do not need a Turkish coast"Situational analysis of the death of the MH17 flight (Malaysian Boeing 777), made on the basis of engineering analysis from 15.08.2014
Military Reviewin Yandex News
Military Reviewin Google News
144 comments
Information
Dear reader, to leave comments on the publication, you must to register.