December 9 2015
5
An important element in the appearance of a promising tank At present, the active protection complex (KAZ) is considered. To increase the survivability of an armored vehicle on the battlefield, special systems are required that can timely detect and intercept flying anti-tank ammunition. The creation of such systems is associated with certain difficulties, which is why at present only a few types of KAZ have been adopted by various armies. Nevertheless, despite all the difficulties, the development of such equipment continues, and new participants join this process. So, in the spring of this year, the Turkish company Aselsan for the first time demonstrated its promising KAZ AKKOR.


The first demonstration of promising development took place during the IDEF-2015 Istanbul exhibition in early May. The aim of the AKKOR project (Aktif Koruma Sistemi - “Active Protection System”) is to create an armored vehicles additional protection complex that can independently detect incoming anti-tank grenades or missiles, and then destroy them using special ammunition. It is assumed that after completing all the necessary tests, the new KAZ AKKOR will become an element of the on-board equipment of the new Turkish Altay tanks. In addition, the possibility of using this complex on armored vehicles of other types. In addition, a special version of the system is offered to equip light vehicles.

It is reported that the development of the AKKOR project started back in 2008, shortly after the start of the development program for the promising Altay tank. Within a couple of years, Aselsan completed design work and began testing the new system. The first successful interception of the learning objective was carried out in 2010. To date, the development company continued to conduct various tests and refinements of its system. In the foreseeable future, it is planned to complete the work and adopt a new KAZ for service as part of the special equipment of promising tanks. 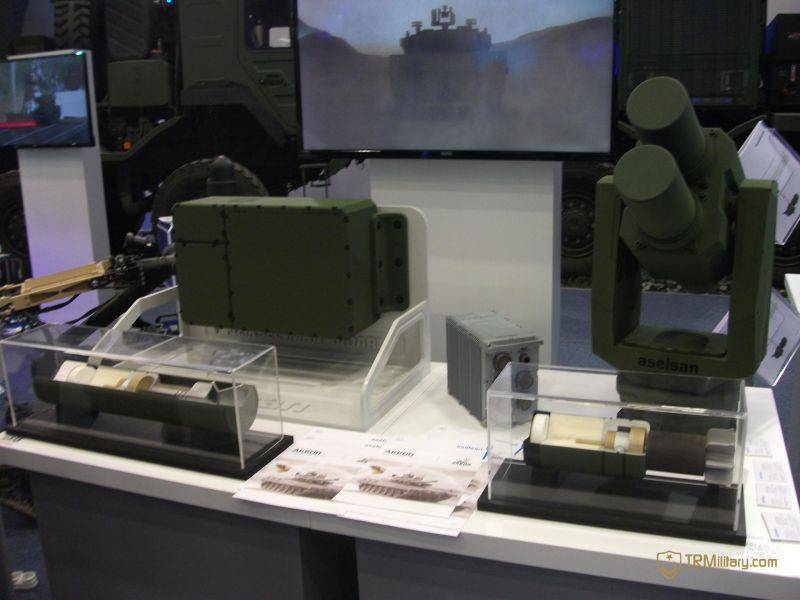 General view of the AKKOR complex facilities. Photo of Trmilitary.com

Turkey can hardly be called a world leader in the field of armaments and military equipment; therefore, there are no revolutionary solutions in the AKKOR project. By its architecture, this complex does not differ from other recent foreign developments. Structurally, it is divided into a control unit located inside the protected armored vehicle, a set of small-sized radar stations and a set of launchers with protective ammunition for interception. The number of those or other elements of the complex should depend on the type of base machine. Thus, according to available data, Altai tanks will receive four radar units and two launchers. Such a configuration of the complex is expected to ensure maximum efficiency in the search and destruction of dangerous objects.

As follows from the available data, the radar of the AKKOR complex will be installed on the cheekbones and stern of the tower of new tanks. This arrangement of antenna units will allow to monitor the maximum possible sector of the surrounding space. However, some data suggest that in the proposed configuration, the complex does not provide a full circular review. Two launchers of protective ammunition should be installed on the roof of the turret's aft pit, with a shift to the stern. Apparently, this place was chosen to provide the widest possible sectors of fire, not covered by equipment on the roof of the tower.

To detect targets, it is proposed to use four (in a “tank” configuration) small-sized radar stations. The units of this equipment should be located around the perimeter of the protected equipment and monitor the environment. The stations operate in the C-band and monitor the sector width 70 ° (probably in azimuth). Such information about the characteristics of the radar may be contrary to other data from promotional materials. In the latter, circular protection of the base machine is mentioned, while four stations with an 70 ° overview can cover no more than 280 ° of the surrounding space. 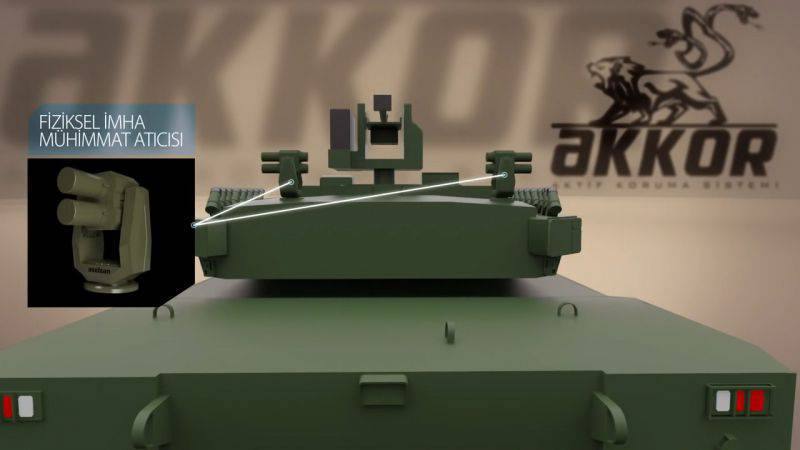 Placement of the complex on the base tank. Shot from advertising video

The launcher of protective ammunition from the AKKOR complex received a design resembling similar units of the KAZ Iron Fist Israeli design. On the tower or roof of the protected armored vehicle it is proposed to install the system with the possibility of autonomous guidance in two planes. The basis of the launcher is a turntable with drives for horizontal guidance, on which a U-shaped stand with mounts for a swinging device with two tubular barrels is mounted. The drives of the launcher, apparently, allow you to direct trunks within a wide sector and thus provide the ability to attack dangerous objects flying up from different directions.

From the available materials it follows that for the AKKOR complex, two variants of ammunition have been developed, which are proposed to be used to intercept dangerous targets. Both ammunition have a similar design, but differ in some noticeable details. The first of them has a smaller length and is equipped with a cylindrical body with a tail part of a smaller diameter and plumage. Inside the wide part of the body there is an explosive charge and a fuse. Apparently, such a variant of ammunition is proposed to be launched using a propellant charge.

The second ammunition has an increased length associated with the use of an additional solid-fuel engine. The tail part of this projectile has a cavity with holes around which the fuel charge is located. An expanding nozzle is installed in the tail section of the munition instead of the tail unit. Apparently, this version of the projectile is actively reactive and is intended to intercept targets at relatively large distances. 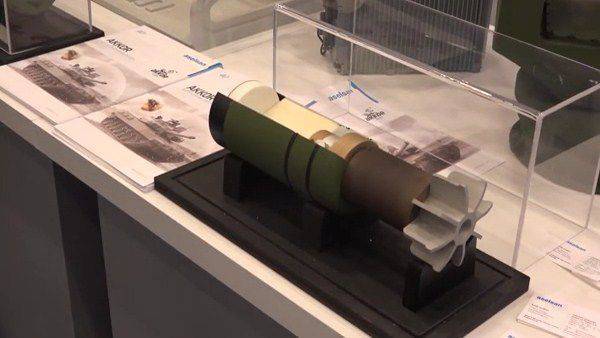 The layout of the ammunition. Shot from the commercial

Promotional materials state that protective ammunition is equipped with a radio shaker. Undermining of the main charge is made when the ammunition approaches the target for a short distance, after which it is destroyed by the blast wave and a stream of fragments.

By its principle of operation, the Turkish KAZ Aselsan AKKOR does not differ from other systems of its class. During operation, the radar stations automatically monitor the surrounding space and detect targets, which, by their size and flight parameters, can be identified as anti-tank weapons. Declared the possibility of detection and recognition of anti-tank guided missiles, rocket-propelled grenades and cumulative projectiles. When a target is detected that is dangerous for the base armored vehicle, the control unit automatically issues a command to one of the launchers. That is aimed at the target and shoots one of the protective ammunition. The projectile approaches the target and, when it reaches a predetermined distance, is undermined, destroying anti-tank ammunition.

For some, not quite clear, reasons, Aselsan is in no hurry to publish all the characteristics of its new development. Only the most basic data as well as some other parameters are announced. Other information has not been published yet. In particular, the maximum detection and interception targets remain unknown. There may also be questions about some of the other characteristics. 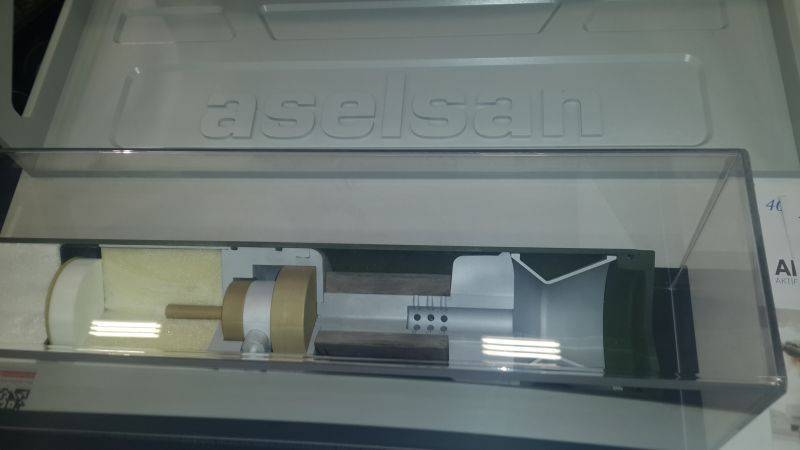 Despite this, the Turkish Defense Ministry has already signed the first contract for the supply of KAZ AKKOR. In accordance with the agreement concluded by 30 in November, Aselsan will have to supply such systems with a total value of about 54 million euros. The number of ordered complexes was not specified. The last batch of ordered equipment will be transferred by the end of the decade. Deliveries of active protection complexes are associated with plans for the construction of new main Altay tanks. Probably, the Turkish Ministry of Defense for a long time decided to equip this equipment with additional protection systems. Now it is possible to secure this intention with a supply contract.

Like other modern complexes of active protection, AKKOR system of Turkish design has pros and cons. The main advantage of all KAZ is the ability to provide additional protection for armored vehicles through the timely detection of threats and their destruction at a safe distance. Moreover, all processes are carried out automatically and do not require human participation. However, there are disadvantages. Some of them are inherent in all KAZ, others, in turn, are peculiar only to individual members of this class.

A common disadvantage of all active protection complexes using radar stations is associated with the possibility of suppressing the detection systems of enemy EW systems. In this case, the automation of the complex will not be able to detect the threat and respond to it. However, radars are the most convenient means of observing and detecting targets and so far have no alternatives.

In the case of the AKKOR system and some of its counterparts, there are a number of drawbacks associated with the design of the launcher of protective ammunition. This unit does not have sufficient protection, which is why even relatively light weapon can cause him serious damage and disable him. At the same time, a tank or other base vehicle remains without a serious element of protection. In addition, AKKOR launcher ammunition and ready-to-use ammunition consists of only two ammunition. Thus, the armored vehicle can only protect itself from four attacks, after which a recharge will be required. 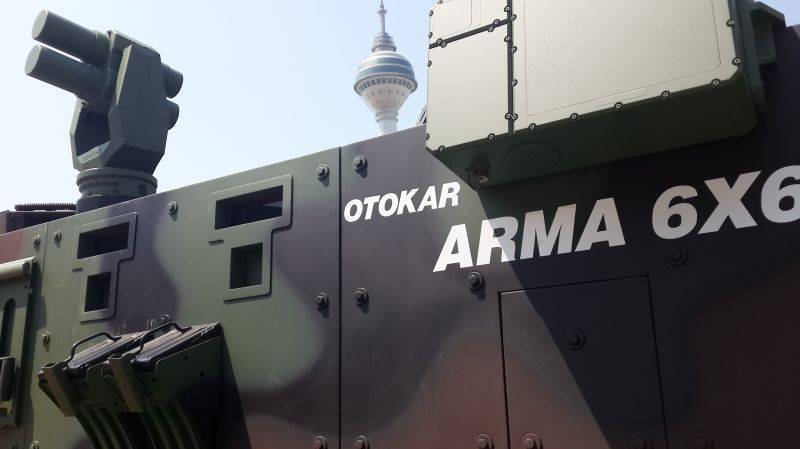 Nevertheless, it must be admitted that the architecture of the complex chosen by Turkish designers allows it to be installed on various machines without any modifications to their design. Thus, KAZ Aselsan AKKOR can be mounted on tanks, armored personnel carriers, and other combat vehicles. However, it should be noted that in this case not only advantages but also disadvantages remain. Perhaps, further development of the AKKOR system will be continued, resulting in the emergence of more secure launchers with increased ammunition or improved electronics.

At the beginning of December, information appeared in the press about the future plans of the company Aselsan, among other things affecting the future future of KAZ AKKOR. It became known that the Turkish company began negotiations with the Ukrainian "Ukroboronprom". The purpose of the talks is to explore the prospects of Ukrainian-Turkish cooperation in the defense sphere. Among other things, the question of further joint work on improving active protection complexes can be considered.

According to the latest news, promising active protection complex Aselsan AKKOR has good prospects. It has already been tested and also ordered by the Turkish army for use in the equipment of the new Altay tanks. Thus, even in the presence of some shortcomings, including fundamentally unrecoverable, this system still could interest the customer and become the subject of a supply contract.