December 9 2015
60
December 4th Turkish tank the battalion entered the Iraqi province of Ninewa. Iraq demanded the withdrawal of the Turkish military from the territory of the country, calling their presence an “invasion”. Iraqi Prime Minister Haider Al-Abadi demanded that the invading forces be withdrawn within 48 hours. According to media reports of December 7 and 8, Baghdad may turn to Russia for military assistance. In turn, Russia intends to discuss the issue of Turkey’s actions in Iraq, as well as in Syria at a closed meeting of the UN Security Council. 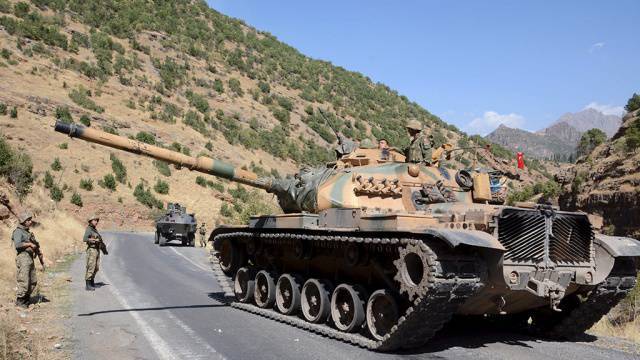 A battalion of Turkish soldiers was stationed in northern Iraq near Mosul captured by the "Islamic State". Troops equipped with armored vehicles. The officially declared mission goal is to prepare the local militia for the battles with the IG. This became known 4 December, reports "Lenta.ru".

However, the Iraqi Foreign Ministry qualified Turkey’s actions as an invasion. Baghdad rejected the possibility of an uncoordinated operation and demanded the immediate withdrawal of the Turkish troops. Iraq reserved the right to countermeasures.

Ankara responded by saying that Turkey has no plans for a ground military operation.

Contrary to the demands of Baghdad, Turkey decided not to withdraw the military from Iraq, reported late December 7 Interfax.

An unnamed representative of the Turkish government told Western journalists in Istanbul that Turkey would not withdraw the military stationed near Mosul from Iraq. “They are expected to stay there,” the media quoted the official as saying.

Interfax recalls that Iraqi Prime Minister Haider Al-Abadi earlier demanded that Ankara withdraw troops from Iraq within 48 hours. Otherwise, he threatened to take “affordable measures” up to the appeal to the UN Security Council.

Turkish Deputy Prime Minister Numan Kurtulmush, at a briefing in Ankara, explained the military presence in the neighbor’s territory by saying that this measure was “directed against IS, which coincides with the interests of Iraq,” reports "Lenta.ru".

Baghdad may turn to Russia with a request for military assistance, said the head of the country's security committee, Hakim al-Zamili, in an interview with Al-Araby-al-Jadeed, the magazine notes "Expert".

“The invasion of the Turkish military in Iraq is a gross violation of the sovereignty of our country. Iraq has the strength to respond to this invasion and expel them from Iraqi territory. We can also ask Russia to send military forces to Iraq in response to Turkey’s violation of our sovereignty, ”al-Zamili said.

In turn, Moscow asked the UN Security Council to discuss Turkey’s actions in Iraq, as well as in Syria.

Russia is going to raise at a closed meeting of the UN Security Council the question of the military actions of Turkey in Iraq and Syria. This is reported by Reuters, citing unnamed diplomats, reports RBC.

“We don’t have the details, but Russia asked to discuss Turkey’s actions in Iraq and Syria,” the agency quotes the source as saying.

According to diplomats, the UN Security Council meeting can be held behind closed doors (on the night from 8 to December 9 Moscow time). The discussion will be led by the United States, since this month they are presiding over the Security Council.

RBC journalists could not get a comment from the Russian representation at the UN.

In addition, reminds RBC, a diplomatic source of the TASS in the UN previously stated that the Russian side will raise on Tuesday at a closed meeting of the UN Security Council the question of the deployment of military troops in northern Iraq.

In the morning of December 8 one more appeared. news on the Turkish-Iraqi theme.

As reported by "Vedomosti" With reference to Reuters, the deployment of a military contingent of Turkey to the north of Iraq in the Mosul area has been suspended.

It is reported that Turkish Prime Minister Ahmet Davutoglu wrote a letter to Iraqi counterpart Heider Al-Abadi with a promise not to send new forces to Iraq as long as Baghdad remains “sensitive” to this issue.

On the eve, the agency reminds, the Prime Minister of Turkey explained the deployment of troops in a planned rotation. Davutoglu stated that the actions were coordinated with the Ministry of Defense of Iraq. However, Iraqi Defense Minister Khaled al-Obeidi has denied this claim.

We consider it necessary to bring another Turkish statement.

Turkish Foreign Minister Mevlüt авavusoglu suggested that “other countries” played a role in Iraq’s reaction to the deployment of Turkish troops. What exactly, he did not specify.

He stated this in an interview with the Turkish TV channel "24", reports RBC with reference to Reuters.

According to him, the reason for sending the Turkish military to Iraq is “well known: this is training and consultation.” Cavusoglu said that the Iraqi Prime Minister Haider al-Abadi himself had repeatedly asked Turkey for more active support against the "Islamic State".

What do Russian experts think about Turkey’s actions and Iraq’s reaction?

Director of the Research Center "Middle East - Caucasus" of the International Institute of the Newest States Stanislav Tarasov reminded "Free Press"that at one time the Turkish authorities concluded an agreement with Baghdad, allowing their military to enter the territory of the country to a depth of 5-10 km.

Turkish aviation under this pretext, it previously attacked the positions of the Kurdistan Workers' Party in Kandil, the expert noted. “It was a closed agreement concluded at a time when Ankara and Baghdad had normal relations,” Tarasov said. “The Turks simply took advantage of the fact that this agreement was not disavowed.”

As for the current situation, today Iraq is actually split, and the United States has the right to send troops there (in agreement with Baghdad). Ankara also played a double game with regard to Iraq: the Turkish authorities, the analyst notes, talked about preserving the territorial integrity of Iraq, and at the same time negotiated with Erbil, the capital of Iraqi Kurdistan. The outcome of the talks was an agreement between the Turks and Kurds on the transportation of gas and oil from Kurdistan (bypassing official Baghdad; however, part of the proceeds should have been received there).

“The second moment - the massive invasion of Turkish troops occurred at the very moment when there was a real threat of reducing the supply of oil and gas from Syria. Moreover, the prospects for the construction of the Turkish Stream after the aggravation of relations with Russia are very vague. An even greater nuisance for Ankara is the complete overlap of the Turkish border with Arab countries, on which the coalition allies under the auspices of the United States and Russia together with Damascus insist. ”

The expert also recalled that Washington intends to block the border by the forces of the Iraqi army and American special forces. As a result, the Turks can cut off from Iraq, and in fact they have built pipelines and hydrocarbon trading with Iraqi Kurdistan. “Sensing that their control over this region is coming to an end,” said the expert, “the Turkish authorities decided to take a proactive approach. In the presence of Turkish troops, Erbil can go on to declare independence. Then the process of the breakup of Iraq can begin. ”

The situation, we add, illustrates the priority of economics over politics. The Turks - more precisely, those Turks who are vitally interested in a large cross-border oil business - they care not about fighting IG, allegedly training Kurds under the nose of the militants, but about profits that trade in crude oil, including dumping, promises. Ankara will do its business under any pretext and will buy oil from anyone; she herself is not a brother. Unpleasantly lit up trade with the militants "IG"? Well, the Turks know what supplier diversification is: bearded today, tomorrow the Kurds. Workers in Ankara can do anything - because they are covered by the Americans.

Observed and commented on Oleg Chuvakin
- especially for topwar.ru
Ctrl Enter
Noticed oshЫbku Highlight text and press. Ctrl + Enter
We are
US Mission in Iraq ends with the creation of a CaliphateIraqi front: jihadists are attacking Baghdad, the US is not going to send troops, Iran enters the battle
Military Reviewin Yandex News
Military Reviewin Google News
60 comments
Information
Dear reader, to leave comments on the publication, you must to register.