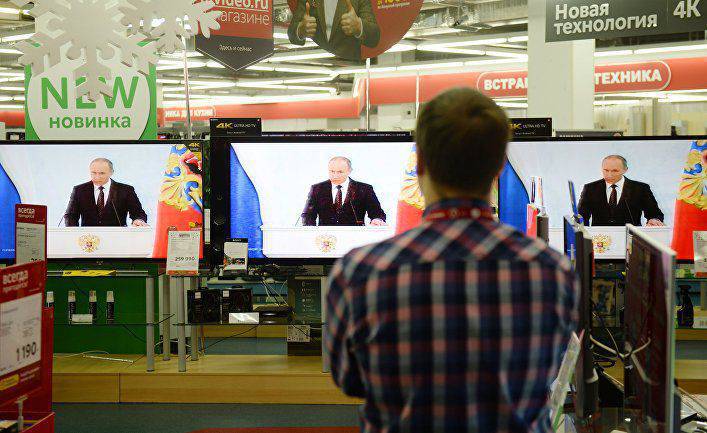 The ability to play chess is an obligatory part of the culture of Russian politicians. And it is not surprising, because few other games can teach strategically and control themselves so well.

I understood this when I read the message of Russian President Vladimir Putin, delivered on Thursday in the St. George Hall of the Kremlin. Approximately one-third of the speech was addressed to both the Russian and foreign publics, and it was this part that caused me to have associations related to chess games that play with several opponents on several boards at once. This is called a simultaneous play session.
Only a very good chess player can participate in such a session, and he can win only if he takes the initiative from the very beginning and imposes his own style of play on the opponent. In the case of the current leadership of the Russian Federation, it is necessary to recognize that it copes with this task excellently. He is greatly helped by those mistakes that are made by players from the opposite side.

Regardless of where the events take place - in Ukraine or in the Middle East - the nature of their actions is almost the same: helplessness and passivity in finding answers to the Russian steps are accompanied by rash and radical reactions using elements of terrorism. Over the past few weeks, we have seen it in the Crimea, which was faced with the undermining of power transmission towers and the subsequent blockade by the radicals of the Right Sector and the organization of the Crimean Tatars in Ukraine. Denying access to Ukrainian electricity eventually made the peninsula even more Russian than it was before. Both materially and spiritually.

The attack on the Russian military aircraft and the barbaric murder of a pilot belong to the same category. The Turkish president did not succeed (and will not succeed) in drawing Russia into a conflict with NATO countries (that is, with us too), so he will have to cope with the consequences of his rash act. So far, Erdogan is gradually losing the remnants of his good reputation. I have no doubt that Russian intelligence has long gathered convincing evidence of Turkey’s trade and political ties (in particular, the closest relatives of President Erdogan) with the so-called Islamic State. Now (undoubtedly, with regret, since their use without disclosure would bring more benefits), the Russian special services will gradually announce them and will wait for a reaction to them inside Turkey. Even in the east, no one will be able to hold out for a long time, losing face.

In Syria, the situation on the battlefield is clearly developing more positively than we are told. Otherwise, I cannot explain one overlay in the speech of Vladimir Putin, which was later corrected by his spokesman, - a statement that the Syrian army is under the Russian command (it is necessary to declare success on time). I consider phrases about Syria to be the strongest part of the speech.

The Russian president described the current state of the front as a zone of chaos and threats to the entire civilized world, and he called the opponents of Bashar al-Assad religious obscurantists. Putin also stated that international terrorism and the so-called Islamic state cannot be defeated by the forces of one country, given that this organization has permanent sources of income, and it uses for its good the new migration of peoples. Putin recommended a joint operation with a UN mandate. In this regard, I was attracted by very tough threats against the Turkish president.

However, it is worthwhile to fear those countries and politicians that have not been directly mentioned. They are not protected by NATO membership, they have long supported domestic Russian terrorism, they are rich and weak. In the current situation, for example, for Qatar, all this is literally a disastrous combination. But the logic of war is relentless ...

Ctrl Enter
Noticed oshЫbku Highlight text and press. Ctrl + Enter
We are
Oscar Kreici: “Russia can rise from the ashes” (Prvnizpravy.cz, Czech Republic)Results of the week. "In the Greek Hall, in the Greek Hall ... the mouse is white!"
Military Reviewin Yandex News
Military Reviewin Google News
106 comments
Information
Dear reader, to leave comments on the publication, you must to register.