December 8 2015
14
Today Tanks still remain the main striking force of the ground forces. However, representing a formidable heavily armed and armored tracked vehicle, we always consider it in the aspect of actions exclusively on the ground. However, the XNUMXth century, especially its first half, was rich in bold experiments and ideas. One of these ideas was an attempt to teach tanks to fly. Today, the projects of “flying tanks” that were worked on in the USA and the USSR are quite widely known.


One of the famous and recognized discoverers in the field of armored vehicles was the American designer John Walter Christie. In our country, he is well known as the inventor of the original suspension system (Christie suspension), which was widely used in the Soviet production tanks of the BT and T-34 series. John Walter Christie was born 6 May 1865, in the small town of River Range in New Jersey. The future designer studied at the evening school Cooper Union. And later, already working at steel mills owned by Delamater Iron Works, he entered a free school for workers in New York. Later, he was able to become an engineering consultant in one of the shipping companies of America. It was at this work that the first success came to him - he was able to obtain a patent for the invention of a carousel designed for machining parts of the towers of naval guns. 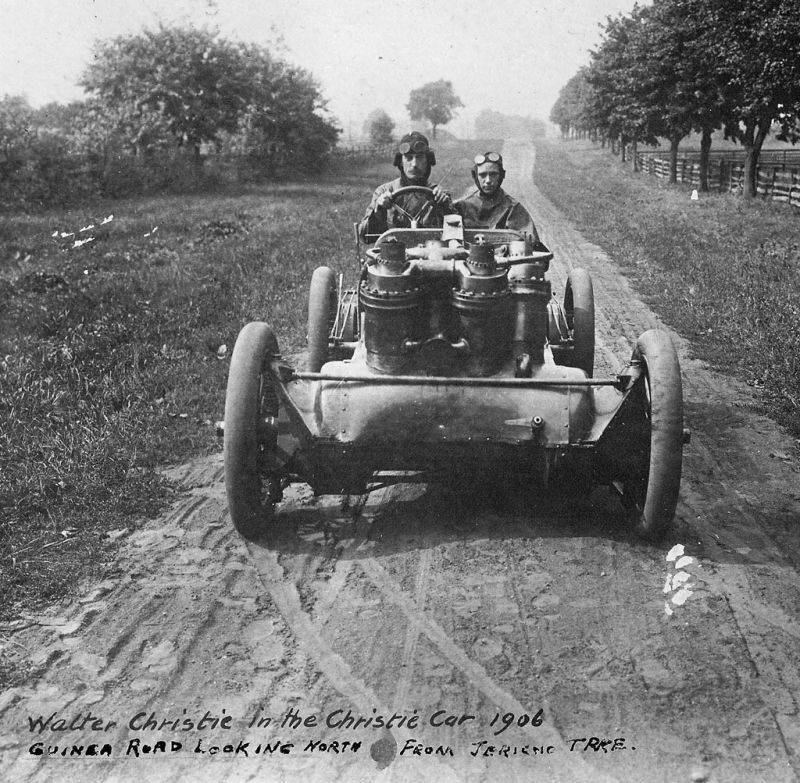 In the 1904 year, Christie, who had a great interest in the emerging automotive technology, was able to build several front wheel drive racing cars; he even managed to win a national prize for the most successful race car design. In 1912, he managed to set up a small company for the production of racing cars and wheeled tractors with prize money, but failed to succeed in the market. The start-up entrepreneur went uphill with the outbreak of the First World War, when Christie took up the creation of various types of armored vehicles.

So, he was able to construct an artillery tractor, a self-propelled antiaircraft gun of caliber 76,2-mm, 203-mm self-propelled howitzer, and also developed an entire line of ACS armed with 75, 100 and 155 mm in a fairly short time. In 1919, Christie received an order for the release of his first tank, which he called the M1919 - by year of development. Creating all his tanks, the designer gave them the opportunity to move both on a wheeled and on a caterpillar, making the leading pair of rinks leading. Such versatility has become a real visiting card of the American designer in the world of tank building at the beginning of the 20th century. It is curious that the US military did not show much interest in Christie's products. None of his inter-war machines were put into mass production in the United States, but the money received for their construction covered the costs of their creation. 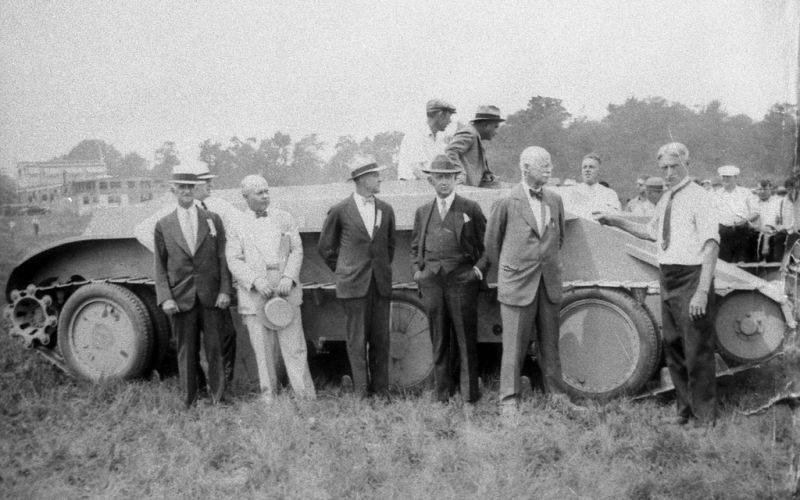 In the United States, the author did not find understanding among the military, but overseas his development was appreciated - in the USSR and Great Britain. Christie himself proposed his concept for high-speed tanks, developing a chassis and an original suspension system, named after him. This suspension was used on tanks participating in the Second World War. In the USSR, as part of the concept of high-speed tanks, a family of BT tanks was created, in the UK, cruising tanks, which included the Covenanter and Crusader. In addition, the Christie suspension was used on the Soviet medium tank T-34 and the English medium tank Comet.

In the period between the two world wars, John Walter Christie created and used in his prototype combat vehicles elements that have become relevant for decades to come in different countries: the use of wheeled-tracked propulsion and unified units; tight layout; engine in a single unit with transmission; use in armor protection of the tank ballistic advantageous contours and the use of welding; the use of rubber tires of crawler tracks with individual suspension in the tank chassis

But this is not all that John Walter Christie offered. The idea to raise the tank to the sky also belonged to a talented American designer. It was he who in 1932 offered a new concept for a tank that could move through the air. American newspapers of those years embraced the designer’s idea with delight: the newspapers printed a scheme of a flying tank, which was supposed to save the country from any attacks and manifestations of aggression. At the same time, even then the idea had many critics and skeptics who doubted the implementation of the project. Perhaps the only person in the United States who on 100% was convinced of the need for construction and the success of the flying tank was Walter Christie himself. To achieve his goal, he walked with fanatical perseverance, and this alone deserves respect.

In the 1930-s, Christie has already created several successful combat vehicles that were able to operate in the enemy's rear in isolation from their troops. However, the “winged tank” occupied a special place in his thoughts; he tried to put this project into practice for several years. His “winged tank” was a 5-ton wheeled-tracked vehicle, on the hull of which a box with biplane-shaped wings was to be installed and an air propeller, the rotation of which was to be provided by the tank engine.

By the 1932, the designer managed to design the lightest tank, most of the parts and assemblies of which (where his design allowed) were made from a new material for those years - duralumin. In fact, the tank hull was double. Its inner part was assembled from sheets of duralumin, and the outer part was made of armor plates with a thickness of 12,7-mm (front of the hull) and 9 mm (side of the hull). The designer left the wheel-tracked part unchanged - it consisted of 4-x track rollers (the front pair when driving on a wheel was controlled), the front guide and the rear drive wheels on each side. In addition, each of the support wheels was also made of duralumin and equipped with Firestone pneumatic tires. The tower on this tank was not set, it was supposed to place the gun in the tank hull, which also had to save the weight of the machine. The total mass of this combat vehicle without ammunition, fuel and crew did not exceed 4 tons, and when fully loaded, the tank mass reached 5 tons. 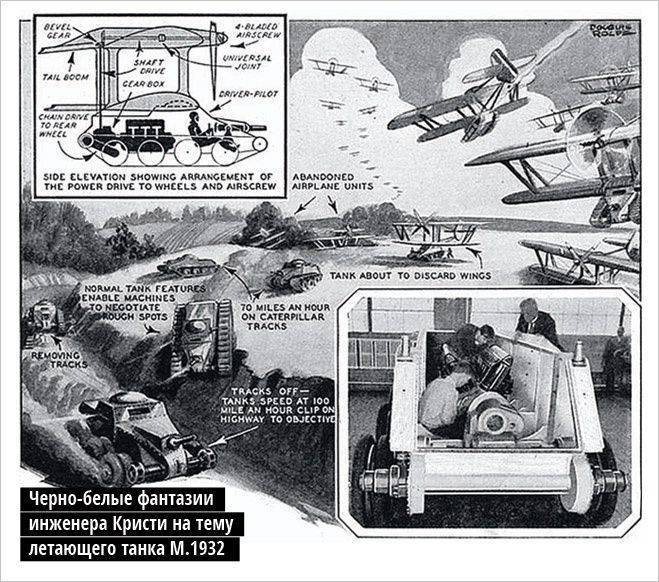 This tank, originally designed for airlift, was chosen by Christie for his experiments on the "flying" machine. The M1932 was equipped with a very powerful V-shaped 12-cylinder Hispano-Suiza engine at that time, developing 750 hp. Thanks to the installation of such an engine, the tank could achieve incredible "aviation»Speeds: 120 mph (about 190 km / h) when driving on wheels on a freeway and up to 60 mph (96,5 km / h) when driving on tracks. Even if the numbers look overstated, the tank's speed capabilities were very high. The tank could easily jump over 6-meter-wide ditches and overcome slopes up to 45 degrees. The fenders were designed to be wide enough and positioned high above the track rollers. In fact, they looked like small wings, increasing the "volatility" of the machine. The gearbox was four-speed: there were three speeds for forward movement and one for reverse.

According to the plans of Christie, the first 70-80 meters of the takeoff run during takeoff should have been performed on caterpillars. After that, the driver (he is a pilot) had to switch the transmission reducer from the tracks to the propeller mounted on the tank. After about another 90-100 meters and reaching the speed of 120-135 km / h, the tank was to rise into the sky. In this case, the driver was located in his usual place in front of the combat vehicle. During the flight, the motor was supposed to feed on fuel from two tanks, which were in a tank hull. In the air, according to the above calculation, the speed of a “flying tank” should have been approximately 150-160 km / h.

Due to the presence of an independent suspension, the tank could safely sit right on the battlefield, which was dug up with craters. After landing, the driver had to use a special lever to drop the frame with wings and plumage, after which it was possible to engage in combat. In this case, the crew of the tank was to consist of only two people - the driver and gunner. The landing of the tank was carried out on the tracks, which was supposed to help it pay off the speed of planning, reaching the highways, the tracks could be removed.

Despite the elaboration of the project and attempts to implement, in practice, Christie did not succeed in implementing the plan. The main reason for the failure at that time was the complexity of manufacturing the remote switching of the drive from the motor from the tank wheels to the propeller and back. At the level of development of technology and technical thought of those years - it was quite a difficult problem. In addition, the American army was not ready to spend large amounts of money on such developments, and it was not possible to implement the idea of ​​transporting a tank under the bottom of a heavy bomber or transport plane, because the promising aircraft were not accepted by the Air Force. Christie’s relationship with the US military was adversely affected by his negotiations with representatives of the USSR. 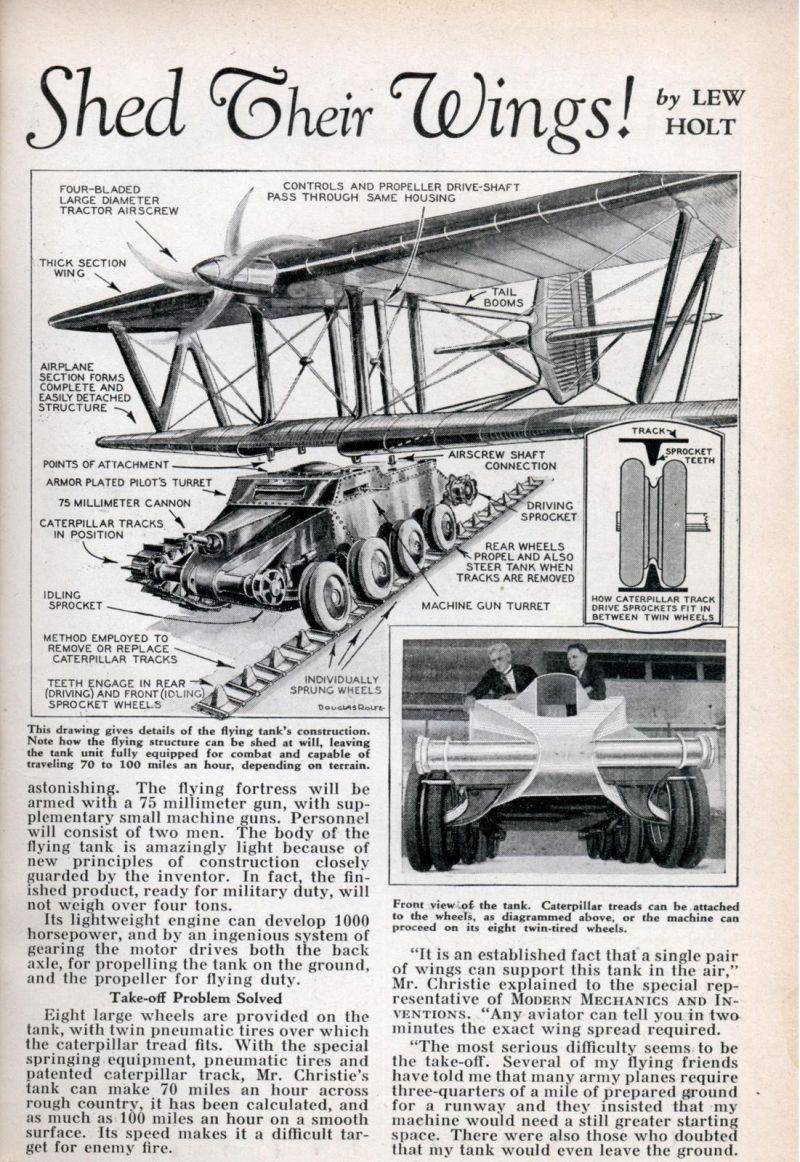 In principle, there was nothing technically improbable in the “flying tank” design proposed by Christie, however this beautiful idea was never implemented in the USA, re-raising its head already in the Soviet Union, where during the war years a flying tank A- 40 Oleg Antonov. Initially, Antonov offered to use his fighting machine to support the partisans. Flight tests of this unusual machine were conducted from August 7 to September 2 1942 of the year.

Returning to Christie, it can be noted that at one time he was clearly underestimated, and it was in the United States. In his small brochure “Modern Mobile Defense”, which he wrote while he was in the UK, testing his chassis together with customers, he already in 1930-ies outlined the main tasks of tank design, which remain relevant today. “My first and foremost task, Christi wrote, was to create such a chassis that could protect a person who decided to entrust his life to him on the battlefield. It is for this reason that the frontal projection should have been hard to attack for any type of ammunition. In addition, when constructing our chassis, we tried to keep them as low as possible, and therefore imperceptible. We also considered the option of improving the security of the machine by increasing its speed. Speed ​​for both aircraft and ground combat equipment is equally important. With a high speed of movement, you can easily bypass the enemy or break away from him, quickly take a comfortable position for firing, as well as a very fast escape from under the shelling. " Much of this is relevant in the XXI century, and not only in reality, but also on the fields of virtual battles in modern computer online games.