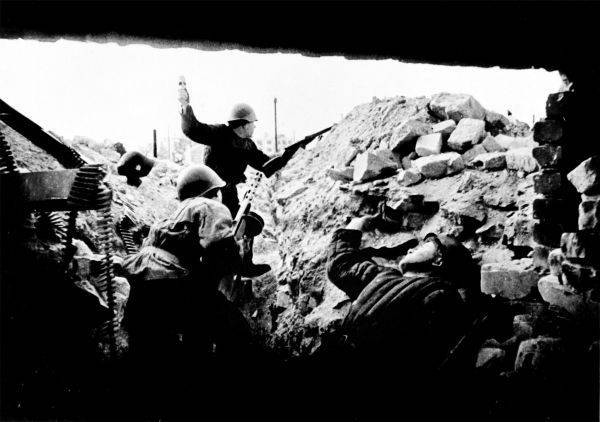 The next anniversary of the Red Army counterattack near Moscow, which began on December 5, 1941, is a good reason to look objectively at the true scale of the feat of the fighters and commanders of the Panfilov division.

The efforts of the “mytho-warriors” have led to the fact that the creation of their “anti-legend” has obscured the real space in the perception of many of our fellow citizens. stories. Recently, much has been written about the battles of November 16-17, 1941 in the region of Dubosekovo-Shiryaevo-Nelidovo, when during the German attack on Moscow several thousand Panfilovites showed truly massive heroism, stubbornly fighting the Nazi tanks. But do not forget that the Panfilov division defended the capital for about two months, starting from the October battles near Volokolamsk and until the beginning of December, when it held a dramatic defense near Kryukovo. That’s exactly what Muscovites of Panfilov’s perceived at that time: as those heroes who, in mortal combat, stopped the invaders at the last defensive line and defended Moscow. Important details about these events were found in the archival funds of the Commission on the History of the Great Patriotic War of the USSR Academy of Sciences.

By the beginning of the battles for Kryukovo, the Panfilov members were already called so officially. November 18 1941, the day of the death of Major General Ivan Vasilyevich Panfilov, the 316 Infantry Division, which he commanded, was transformed into the 8 Guards Infantry Division; 23 November division received the honorary title "Panfilov". And then Kryukovo, the village and the station - for a long time, since 1970, is located within the precincts of Moscow, in Zelenograd. In 1941, it was thought that the area was located in 22 kilometers north-west of the capital. And yet the very disturbing circumstances of the place ...

On November 30, after several days of bloody defense in the village of Sokolovo, the remnants of the Panfilov division were relegated to a new frontier - towards Kryukovo. Battles here lasted for a week - from 1 to December 8. As the participant of those battles, the Kazakh Baltabek Dzheptysbayev, recalled, "there are few old Panfilov members." Another Panfilov member, L.N., recalled why this happened. Kurganov: "The regiment is battered. Of the 2,5-3 thousands left in the regiment about 600-700 people." In the 1073 regiment, commanded by Senior Lieutenant Bauyrzhan Momysh-Uly, only about 200 remained.

December 2 Germans still managed to break into Kryukovo. Fierce street battles ensued, Panfilov fought for each house. The commissioner of the 1073 regiment, Pyotr Logvinenko, told 1946 in December: "Kryukovo passed from hand to hand. From December 1 to 7, we went into attack every day. At four zero-zero, as a rule, we switched to attack" .

Mainly applied on both sides weapon close combat: machine guns, grenades, and from artillery - anti-tank and regimental guns on direct fire. The Germans, having mastered the village, immediately created a powerful defensive knot. An attempt to knock the Germans out of Kryukov on the night of 2 on December 3 was not successful. The enemy, concentrating two infantry battalions and up to 60 tanks, put up stubborn resistance. German tanks were ambushed in destroyed houses or were buried in the ground, firing aimed at our advancing units.

Severe frosts began near Moscow these days, the temperature dropped to minus 37. From the air, the Nazi attacked the Panfilov’s position aviation. “What’s the worst: we cursed clear weather near Moscow, we hated clear weather. But here (near Kryukovo) both snowstorm and snowstorm, but they still fly and beat and beat,” said Dmitry Potseluev-Snegin, in those days commander of the artillery division of the 857th artillery regiment.

The memories of Panfilov about Kryukovo are a harsh reality of the unformed feat, once again confirming the inexorable truth of the poet Mikhail Kulchytsky who died at the front: "War is not a firework at all, but simply is a difficult job." That's what they said about those battles in October of 1942, their participant A.S. Trefilov: “I reached a stone building through a fire curtain. There was a mortar fire. I ran through the field, ran to the building. There was a medical cart. Killed. He saw one guy killed, whom he had seen alive the day before. He went down into the pit. There was a torn man lying there. He dug it down in the snow. "

There were episodes, then trapped in a well-known Soviet song about the village of Kryukovo to the poems of Sergey Ostrovoy: "All the bullets ran out, no more grenades." Panfilovka Z.A. Bondarina told 1942 in August: “Our division led a long and difficult battle in Pod Kryukov. The front edge of the defense occupied brick sheds, these brick sheds will forever be remembered by the Panfilov. People left, sometimes the cartridge was missing. After the fighting, remembering them, we they loved to sing "Ten rifles for the whole battalion" ... But they held tight, did not move away. "

The song about ten rifles to the tune "Spinning, spinning a blue ball" for the front-line film collector was performed by Boris Chirkov in 1941. The poems of Vasily Lebedev-Kumach were not at all ceremonial:

Ten rifles for the whole battalion,
In each rifle the last cartridge.
In torn overcoats, holey sandals
We beat the Germans in different ways.

But even in such extreme conditions, people fought inventively, puzzling the Nazis. Here is a Panfilov P.V. story recorded in December 1946 of the year. Tatarkova: “Scout Protasov was especially distinguished. We had to take an observation point at the brick factory in Kryukovo, watch from here. Protasov, despite the fact that this place was cut off by the Germans, German machine guns were beaten with crossfire, he climbed into the pipe of the brick factory. a number of other infantry and other battalion fighters climbed through. From there, he led the observation and passed the command. "

The end of the story about the Panfilov battles at Kryukovo turned out to be optimistic. 4 December to 17: The 00 division received a replenishment in the number of 380 people. Commissioner Logvinenko recalled: "Selected people were sent to us - Siberians. They came to the 80 regiment, I would give them two thousand any other people. (...) We did not even have time to write down their names an environment where there was no time to write or read, you just had to shoot. "

December 5 fighters from the regiment of Momysh-Uly managed to seize the furnace and those same sheds of a brick factory. A day later, the position of the Nazis became vulnerable. Here is the story of A.M., written down in December of 1946, Vinogradov: "6 December 1941. At 12 hours of the night we began to conduct artillery training on Kryukov, and the General Command Headquarters gave us a solid replenishment. Eresovsky units appeared for the first time, and they provided us a very great service. Each division, each battery was assigned a certain a map of the field, a certain area, and this battery should literally mix with the earth everything that is there, both living and dead. "

Panfilovets F.D. Tolstunov in October 1944-st briefly described the victorious outcome of those December battles: "On the night from seventh to eighth, they launched an offensive. The Germans beat out Kryukovo station, captured 18 tanks. There were many Germans killed. After this our victory over the Germans at Kryukovo station Germans drive and drive them to Istra. "

As Commissar Logvinenko recalled, after the division was already sent to the reserve for resupply, a solemn meeting was held in Kryukovo, and those few Panfilov members who did not receive awards for the October battles and survived in November-December were given their combat orders.

Ctrl Enter
Noticed oshЫbku Highlight text and press. Ctrl + Enter
We are
Day of the Hero of the Fatherland. DubosekovoMyths of the Great Patriotic. Papier mache helmet
Military Reviewin Yandex News
Military Reviewin Google News
59 comments
Information
Dear reader, to leave comments on the publication, you must to register.