Wizards from the IMF invented a special recipe for Ukraine: not default, but zombie economy

December 8 2015
115
The less time is left until December 20, the more actively the officials of the International Monetary Fund begin to fidget in their seats. The reason is that December 20 is the deadline when Ukraine either has to pay 3 a billion dollars of loan obligations to the Russian Federation, or provide an authoritative public or private financial structure capable of giving Russia guarantees of repayment of debt in the period 2016 through 2018.


Recall that earlier, Russian President Vladimir Putin said that the Russian Federation was ready to accept such a restructuring option that even the International Monetary Fund itself did not ask for Moscow. The head of the IMF, Christine Lagarde, in fact, recognized Ukraine’s state debt, offered Russia to postpone payment of debt obligations by Ukraine to 2016 a year, and Russia considered it possible to install payments for Ukraine on 3 of the year (by a billion dollars from 2016 to 2018). The only condition for Russia is the provision of guarantees from a reputable structure regarding the fact that Ukraine will precisely fulfill its debt obligations to Russia.

Since Vladimir Putin’s proposal was voiced, several weeks have passed, but no respected financial structure is going to take responsibility for the Maidan Ukraine. The United States refused to provide guarantees at all, in effect confirming the thesis that Ukraine had lost all statehood and was not able to act as a subject of legal economic relations of the state format.

Now Ukraine has less than two weeks before the real default, because according to the IMF charter, if a state refuses or cannot make scheduled payments on government debt, then its economy automatically defaults. Yatsenyuk, the Prime Minister of Ukraine, declares that he is not going to accept any conditions of Russia and “insists” on writing off 20% of the debt and on installments of payments on the remaining amount up to 2019 of the year.

In other words, the situation less than two weeks before December 20 is quite a dead end: Maidan authorities don't want to pay the “independent” (yes, especially for now there is nothing — the European embankment, ”for example, where it is more significant, because Yatsenyuk himself can cut millions ), Russia does not accept Yatsenyuk conditions, the IMF does not find someone who could vouch for Russia for Ukraine.

And in such a situation, the Board of the International Monetary Fund is going to go to unprecedented and openly questionable measures. In order to save the Maidan henchmen of the West (and the IMF and the project of Western “friends”) from popular anger, which will be inevitable in the event of a Ukrainian default, the IMF is ready to revise the basic principles of the organization’s work. At the moment, the basic rule of the IMF is as follows: if the state refuses (is not able) to service the state debt, its economy is declared default, and lending to such an economy is automatically collapsed. Now, the "bright minds" of the executive board of the International Monetary Fund are going to consider the question that you can go to the formula: "credit, even if defaulted." A sort of zombie economy - in the sense that when the state economy ordered to live long, everyone continues to be called upon to feed her with a spoon and to speak as if it were alive ... 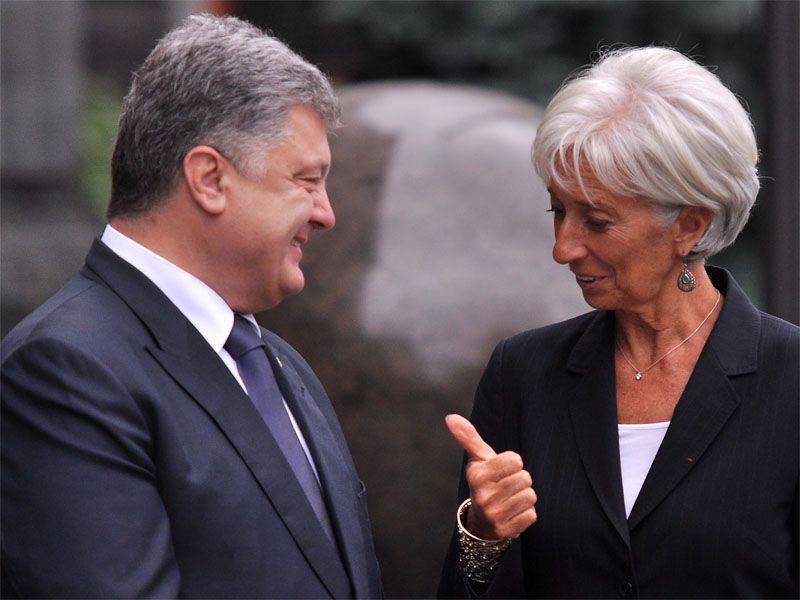 As a matter of fact, in such a situation, to put it mildly, the very concept of default is smeared out, and creditors become practically statisticians - after all, in fact, they may not receive a penny from the indebted state, since the IMF is ready to continue to pour money into the black default through the system of state creditors hole with no guarantees of return.

IMF spokesman Jerry Rice reports that the change in the rules of the fund can take place in two stages. One of the stages is the revision of the Lending-into-Arrears Policy. This is the policy of crediting of one or another state by the International Monetary Fund, under which the loan funds are received only by those countries that fulfill their debt obligations. The second stage, to all appearances, may turn out to be altogether “wonderful” up to the revision of the very concept of “default”.

If the executive board of the IMF decides on a change in the basic principles of credit policy, then in fact it will lead to a breakdown of the long-standing system of macroeconomic relations. And in this case, the IMF and its main puppeteers will be difficult to suspect in the glimpses of humanism. The fact is that, for example, Argentina was not met by the IMF or the American creditor banks in recent years for some reason did not go, demanding to pay not only all the amounts on loans, but also draconian interest. The Argentine authorities asked to go on the path of debt restructuring and were ready to make part of the payments immediately, but none of the creditors were impressed, and Argentina, with its incomparably more efficient (unlike Ukraine) economy, was plunged into default without any options about changing the credit policy IMF. Attention is drawn to the fact that the Argentine economy was brought to default by a decision of the American court. Argentina was deprived of the right to international borrowing, frankly reducing accounts with President Christina Kirchner, who openly declared her unwillingness to do the will of the United States. Now another person has come to power in Argentina - the oppositionist Mauricio Macri, whose election is so happy in Washington ... Apparently, there will be no defaults for Argentina now ...

From all this we can draw one conclusion: no macroeconomic laws in the world are actually implemented. The situation with the same IMF has slipped to the next level: if Western puppets are at the head of a state, then the default for this state is taboo! For this purpose, ridiculous formulas will be invented, having nothing in common with the economy, charters and agreements will be rewritten, public debts will be artificially transferred to the category of private ones, etc., etc. Everything - with one sole purpose: to keep the puppets in their chairs so that they have the opportunity to promote the interests of their puppeteers.

Ctrl Enter
Noticed a mistake Highlight text and press. Ctrl + Enter
We are
Results of the week. “Bambarbiya! Kiergood! ”Who wrote off the debts of Russia?
115 comments
Information
Dear reader, to leave comments on the publication, you must to register.