In the West, found the "common interests" of the Kremlin and "IG"

December 8 2015
30
Many analysts in the West write that Moscow could become an ally of Washington in the fight against world terrorism. What prevents the Americans from forming a full-fledged coalition with the Kremlin and striking together bearded enemies? It turns out that something really hinders. There is an opinion that the Kremlin and the “Islamic State” have common interests: the destruction of the current world order. How can the White House make the right choice in such conditions? 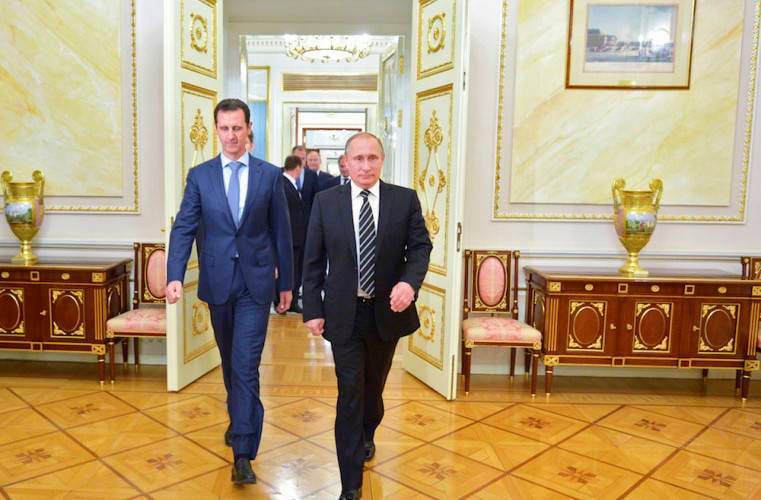 German politician Dustin Dehets, director of the private research institute Manatee Global Advisors in Frankfurt am Main, is doubtful about the allegations of a possible alliance between Russia and the West.

His article was published on the portal atlantic-community.org and was translated "Mixednews".

Despite the fact, the author writes that in recent times many analysts have been writing about the need for a joint struggle between Russia and the Western states against terrorism, the formation of a coalition with the Kremlin against a single enemy is a big question. Why?

Dustin Dehets is sure that one “important circumstance” must be taken into account: the Kremlin and the “Islamic State” have “common interests” - they want to “destroy the modern world order”.

True, the degree of threats emanating from the two forces is different. Therefore, foreign policy must provide for proper prioritization. You can not make a mistake in the selection.

The analyst recalls that in the Financial Times newspaper columnist Gideon Rahman states: in the Syrian conflict, Russia is in fact an ally of America. And what about Europe? Why, the German example: The Social Democratic Party of Germany believes that Russia should be viewed as a force standing on the western side of the conflict. A member of the Bundestag, coordinator of cooperation with Russia, Central Asia and countries of the Eastern Partnership Gernot Erler says that the West and the Russian Federation should cooperate in Syria.

In the opinion of Dustin Dehets, the threat of IS, although it is real, is not at all the threat that will interfere with the existence of the current world order ruled by the West.

In addition, the "IG" can not defeat not because the militants are distinguished by military prowess. The fact is that the countries included in the coalition have their own priorities. And they outweigh the need for a joint struggle against the "caliphate."

The author of the article briefly lists these priorities.

Saudi Arabia has conceived to "put on its knees" Iran, whose interests are most vulnerable in Syria.

Iran is trying to preserve the regime of Bashar al-Assad in Syria: after all, the government of the latter did not prevent Iran from supplying Hezbollah with everything necessary.

The US administration simply does not want to be drawn into another war in the Middle East.

For Turkey, the main source of anxiety is the approach of the Kurds to their goal - the creation of an independent state.

What would cooperation with Russians lead to?

According to Dehets, a coalition with the participation of the Russian Federation would not change the existing alignment. The Kremlin, like Iran, wants to maintain the power of Assad. On the other hand, the Russian “foray” was the result of a vacuum left by the Western powers. The West actually gave the Kremlin the opportunity to assume the role of an ally in the fight against IG, for which Washington and Brussels could pat Moscow on the head - cancel or at least weaken the sanctions regime, and without concessions in Ukraine. If the Kremlin had achieved such goals, Putin, the author believes, could have congratulated himself on the "doublet." He would have achieved and the abolition of sanctions, and would have kept "his troops in the east of Ukraine." And at the same time would guarantee the "survival" of the regime of Bashar Assad.

The expert proposes to judge the Kremlin not by words, but by deeds. The Kremlin claims that it fights against the IG, and in fact strikes blows mainly according to the forces of the “moderate opposition.”

In Europe, Russia has given the West a real challenge. He is, the analyst notes, a combination of several factors.

The war that Moscow is waging in Ukraine shows not only the desire of President Putin to maintain control over Kiev’s political future. The Kremlin, the author believes, threatens "the whole system of European security."

Russia seeks to undermine all the pillars: the OSCE, the NATO-Russia act, the Treaty on Conventional Armed Forces in Europe, the Budapest Memorandum and "several other smaller mechanisms." And in its endeavor, Moscow has achieved "tremendous success." Why so?

It turns out that Berlin and Paris underestimated the “systemic and structural” nature of the confrontation. They are “trying to isolate and freeze the conflict around Ukraine” and thus make a big mistake, because “the actions of the Kremlin demonstrate that its challenge is addressed to the entire West”, and not to Ukraine alone.

As an argument to this thesis, the expert points to the "rhetoric of the Kremlin towards the Baltic countries": they say, this rhetoric "is rather threatening." And the Russians "almost regularly violate the airspace along the northern border of NATO."

And what about the West? And all his previous attempts to isolate conflicts with Russia led to zero results: violation of the armistice agreement in Georgia in 2008 went unpunished. Now it has come to the point that Berlin proposes to conclude a trade agreement with EurAsEC - the main brainchild of Putin.

Expert conclusion: yes, IG is a serious threat, but the confrontation with Russia is “systemic” in nature. And one more thing to be remembered: the Kremlin and the “IG” are related by their position on freedom - both the first and second are its enemies.

So, the readers of “VO” got acquainted with the next opinion of the next outstanding researcher in the sphere of world politics. This time the expert was even the head of a whole research institute.

According to Dustin Dehets, that the Kremlin, that the IG are the same enemies of freedom, however, Russia is worse than the bearded ones because it is a “systemic” enemy, and in Europe it threatens not only Ukraine, but the whole West, encroaching on its peace agreements and progress. Putin is asleep and sees how to occupy the defenseless Baltic states and even encroach on the sacred - NATO alliance.

The article of this expert, apparently, leads the reader to the fact that the “defensive” Organization of the North Atlantic Treaty, the purpose of which at one time was to contain the “Soviet threat”, has not at all lost its relevance. The Russians were, and still are, “systemic” enemies of the West, responding with contempt to all the “peace initiatives” of Brussels.

Observed and commented on Oleg Chuvakin
- especially for topwar.ru
Ctrl Enter
Noticed oshЫbku Highlight text and press. Ctrl + Enter
We are
Situational analysis of the death of the MH17 flight (Malaysian Boeing 777), made on the basis of engineering analysis from 15.08.2014Syria: Americans scare themselves, and Asma Asad buys chairs
Military Reviewin Yandex News
Military Reviewin Google News
30 comments
Information
Dear reader, to leave comments on the publication, you must to register.