December 7 2015
49
Barack Obama made a speech on American television in the Oval Office. In his opinion, the mass execution of people in the California city of San Bernardino is a terrorist act. The president hinted at an "extensive conspiracy" in the United States and called on Congress to sanction the use of military force against the Islamic State. B. H. Obama promised that the US military would arrange a "hunt" for terrorists all over the planet. However, his speech to the future did not inspire other citizens who are ready to fight the militants right now - on the streets of their native cities. The president of one university called on students to arm themselves and “do away with Muslims.”


Speech by Barack Obama can be heard on the Internet at CNN website. 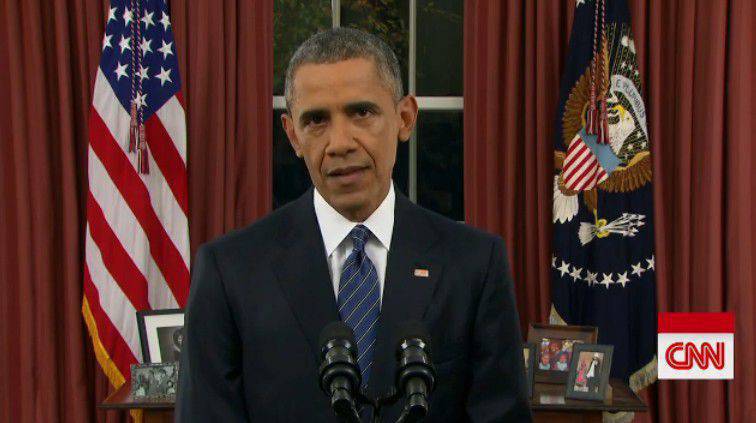 The President of the United States, Barack Obama, noted in a message to CNN, on Sunday made a "passionate" speech, promising to "destroy" the group "IG" by conducting a "merciless, strong and wise campaign" that "is consistent" with American "values".

Obama's televised address to the “nervous nation” was recorded in the Oval Office and broadcast later on CNN’s prime time. The president’s speech was listened to by millions.

The president said that the mass execution last week in San Bernardino, California, was a terrorist attack by two radically-minded people professing a "perverted" form of Islam.

“It was an act of terrorism, designed to kill innocent people,” Obama said.

“And I want you to know that. The threat of terrorism is real, but we will overcome it. We will destroy IS and any other organization that tries to harm us, ”said the US President.

Saying this, B.H. Obama was clearly aware, says journalist Stephen Collinson, that public support for his response to terrorism is “waning.” Maybe this is precisely why Obama "tried to calm the people" with the words about "crisis under control" not sitting at the table, as most of the previous presidents did, but standing behind the podium installed in the Oval Office.

“We will win, we will be strong and smart, strong and tireless,” Obama told the people.

He further urged Congress to take measures to tighten control over the purchase weapons in the country. None of the terrorists should be able to quickly and easily buy firearms.

According to a CNN journalist, such an idea would trigger the “wrath of the conservatives. Nonetheless, Obama is confident that tight control over the circulation of firearms would be a key part of the fight against IS. The president believes that now people who want to harm the Americans are “too easy” to acquire weapons in the USA. When “suspects” have the opportunity to purchase automatic weapons, it becomes a “national security issue,” said Obama. Military weapons — such as what was used in San Bernardino, where the 14 people died — should not be sold as it is being sold now.

In the congress, reminds CNN journalist, today the Republicans dominate, and they, of course, will make so that the bill from Obama, aimed at revising the weapons laws, was "almost impossible" to accept.

In his speech, B.H. Obama called on lawmakers to finally allow the use of US forces in the war against IG.

Probable Republican presidential candidate (race favorite) Donald Trump ridiculed Obama's speech, saying, “Is that all?”, And remarked that the country “needs a new president — and quickly!”

Florida’s former governor Jeb Bush, another contender for the chair in the Oval Office, said that Obama has finally abandoned his “political fantasies” and acknowledged that terrorism does not retreat at all.

In his speech, Obama warned that the United States would not win the war against IG if ground forces were deployed along the lines of the Iraq campaign, which was a mistake. Obama is confident that his approach, which is already being used, including with air strikes and cooperation with local forces in Iraq and Syria, will make it possible to win.

The president also noted that the adherents of Islam are also responsible, although “bandits and murderers” from the “IS” do not speak on behalf of pure faith - they are more likely preachers of the “cult of death”. However, “this does not mean that it is necessary to deny the fact of the spread of extremist ideology in some Muslim communities.” Muslims are therefore obliged to eradicate manifestations of radicalization in their environment, to resist them. Islamic leaders should unequivocally reject the "ideology of hatred" professed by the IG and Al-Qaida groups.

According to Obama, the US military will hunt for terrorists in any country where they hide. The president said that Washington would cooperate more closely with the allies in order to stop funding the IG and prevent the recruitment of foreign fighters. He also promised to “intensify the search for a process” to ensure a political settlement in Syria.

In the final speech, Obama called on Americans for unity and patriotism and declared that freedom is “stronger” than fear. American citizens, he said, should not forget what makes their nation "exceptional."

Obama's speech, we add from ourselves, did not seem convincing to everyone.

Informational portal Rawstory.com spoke about Jerry Falwell, teacher and president of Liberty University. This man expressed indignation at Obama’s attempt to tighten control over his weapon and, as a response, suggested urgently arming himself, practicing shooting and “doing away with the Muslims.”

Jerry Falwell, President of the University, which adheres to Christian values, urged his students to obtain permission to conceal the carrying of firearms. In this way, young people could have prevented a likely next mass execution.

“It just blows up my brain,” said the teacher, “when I see how the President of the United States says that the answer to [shooting in San Bernardino] needs more control over the circulation of firearms,” the Falwell edition quotes. The university activist hinted that he had a “pistol in his back pocket” right now. He further called for a weapon to "kill the Muslims before they come and kill us." 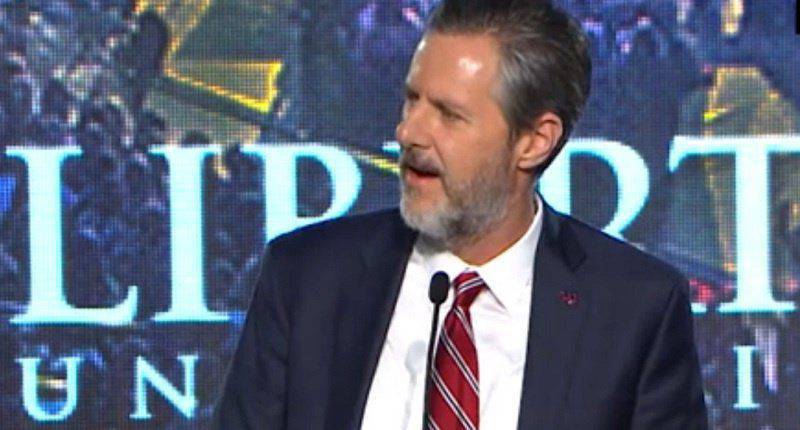 Jerry Falwell Jr .: Steep, like a boiled egg (screenshot of a video from a teacher’s speech to students)

He stated that the university offers a free course on obtaining permission to conceal the carrying of weapons. Falwell said: “I would just like to take this opportunity to encourage all of you to get such permission. We offer a free course. Let's give them a lesson if they ever seem here, ”he said.

Historian Stephen Cohen, an expert on Russia, also adds his own point of view on the fight against terrorism. Unlike the radically minded educator Jerry Falwell Jr., who carries a gun in his back pocket, Cohen believes that the threat of terrorism can be eradicated only internationally and only with the help of the Kremlin.

Translation of textual adaptation of audio recordings of a speech by Professor Princeton and New York University Stephen Cohen at a meeting of the San Francisco Commonwealth Club hosted on a paid resource commonwealthclub.org, it is possible to read in full and in Russian for free on "InoSMI".

We give the main thing from the speech of Cohen.

“Today’s terrorists use conventional weapons, assault rifles, mortars and bombs. But if they had a bank with radioactive materials in Paris, Paris would have to be evacuated. This is a real threat today. This type of threat cannot be eliminated, restrained, uprooted completely, unless we have a partner in the Kremlin. This is short. I repeat once again, I am talking about a partner, not a friend. Nixon and Clinton talked about a dear friend Brezhnev and a friend of Yeltsin, but it was pure window dressing. I don’t care whether we like the Kremlin leader or not, but we must recognize the existence of common interests for the sake of partnership, as two businessmen cooperate in concluding a contract. They have common interests, and they need to trust each other, because if one of them breaks the contract, then the interests of the second will suffer.

Today we do not have such relations with Russia, even after Paris, and I have been talking about this for several years in a row. People say that I am not a patriot and a Putinist, but this is not so. I answer them that this is the highest form of patriotism - the protection of America’s national security. ”

According to Cohen, the US government should be patriots of America’s national security, and for this you need to “rethink everything”. At one time, the Clinton administration, having chosen the anti-Russian approach “the winner gets everything”, acted “unreasonably,” the historian believes. This policy "undermined the chances of a strategic partnership with Russia at a turning point stories". “Unfortunately,” said the scientist, “today's reports indicate that the White House and the State Department are thinking mainly about the opposition of Russia in Syria. They are said to be worried about how Russia is challenging American world leadership. ”

However, according to Cohen, the United States can no longer "lead the world alone". Globalization has put an end to the unipolar world. “A multipolar world has arisen before our eyes, where there is not only Russia, but five or six world centers,” the historian reminds. And yet Washington is stubbornly unwilling to recognize this reality. And this "became part of the problem."

As a result, we’ll add to the conclusion that isolated fighters against terrorism appear in the USA, propagandizing the hidden carrying of weapons and shooting Muslims, and in Syria and Iraq there are simultaneously two coalitions fighting against the seemingly common enemy - the IG group.

In fact, Obama’s new “strategy” (reinforcement of actions against the IG and additional control over the US arms trade) is doomed to failure. The first part of the statement is empty rhetoric, since the White House fights primarily with Assad, and not with the IG; the second “dove of peace” will not be allowed to be realized by conservative Republicans, who value the right to carry pistols in their pockets.

Therefore, the passionate speech of Comrade Cohen is not a seed that has fallen into fertile soil. The White House and the State Department will continue to think in the spirit of the Cold War, and the United States will still have a strong and elusive enemy in the person of terrorists.

Ctrl Enter
Noticed oshЫbku Highlight text and press. Ctrl + Enter
We are
Green banner over the "New World". Radical fundamentalism in american politicsGeopolitical mosaic: the Obama administration is going to advertise the bombing of Syria through a TV show, and Putin and secret weapon will help Damascus
Military Reviewin Yandex News
Military Reviewin Google News
49 comments
Information
Dear reader, to leave comments on the publication, you must to register.