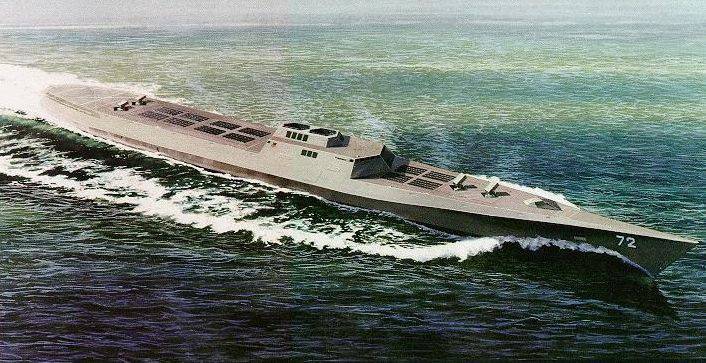 Permanent participants in the dispute about the concept of the development of the modern Navy and the eternal confrontation between “shell and armor” are pleased to welcome a new participant, N. Dmitriev. Below is a brief review of the article “Armadillos in the XXI century. What is wrong with them? ”


The theme is deservedly popular, which means full speed ahead.

In modern navy, sadly, the days of superlinkors and other giant ships are long gone. The cost of their construction and maintenance is excessively high for today's military budgets. 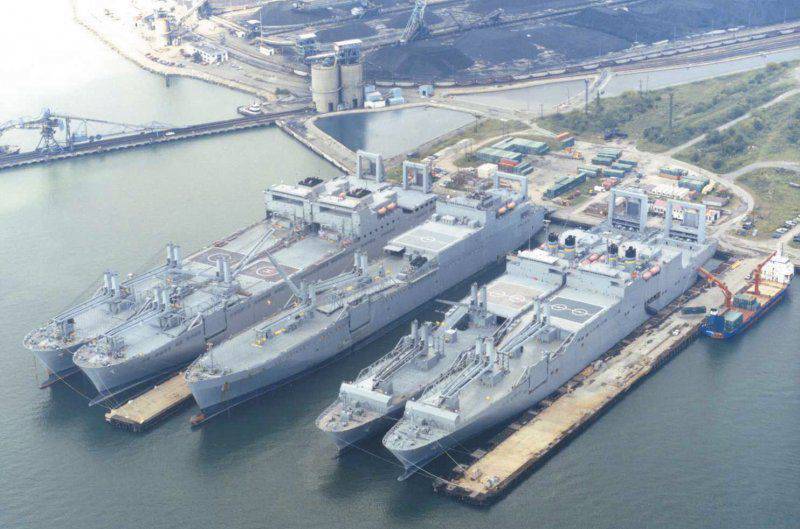 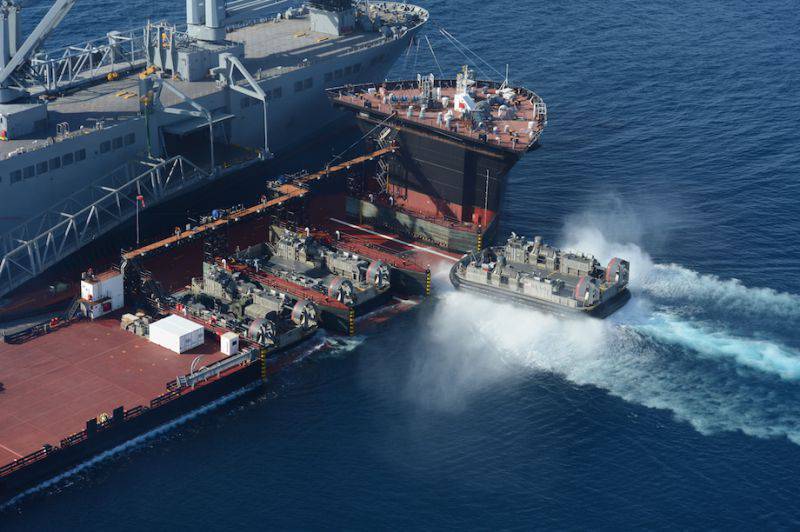 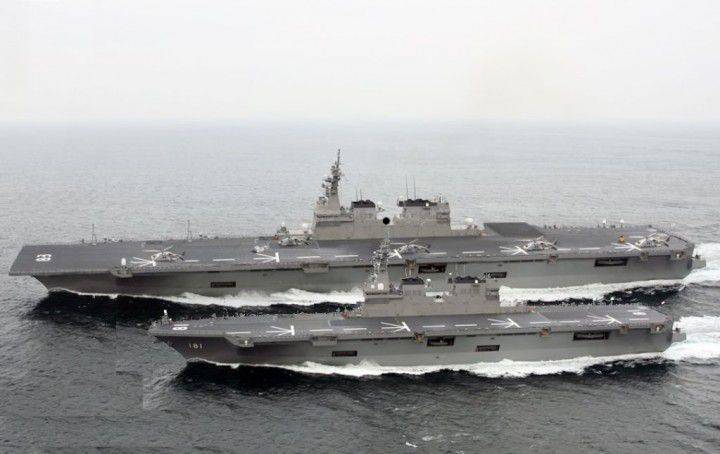 Helicopter destroyers Hyuga and Izumo (Japan). The length of the Izumo is 248 meters, full in / and 27 thousand tons.

Now even beggars such as Egypt can afford to land the Mistral with a displacement of 20 thousand tons. However, to adopt a modern destroyer (some 8 ... 10 th. Tons) can only seven states of the world. Interestingly, dear N. Dmitriev knows the answer to this riddle?

(A clue: the destroyer is equipped with a zonal air defense system, which, together with detection means, SLA and ammunition, is twenty times more expensive than its hull. Therefore, you can build a second larger ship, having received Izumo and Mistral, but in terms of cost and labor intensity built such a giant does not even come close to the destroyer.)

Tons of displacement do not cost anything against the high-tech “stuffing” of the air defense ship. Differences in the cost of armored and unarmored destroyers are within the margin of error. 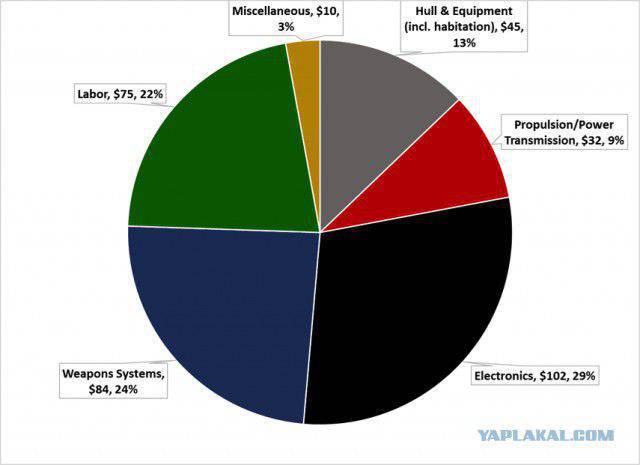 The diagram shows the cost structure for the construction of a Chinese frigate Type 054A with relatively primitive and cheap weapons (medium-range SAM systems, only 32 launch cells). As a result, the cost weapons and detection tools amounted to ~ 200 million (53%) versus 45 million from the case with its fittings and interior decoration (13%).

In the 21st century, the fleet is ruled by the effectiveness / cost ratio, and I will proceed from this.
Comrade Dmitriev, to put it mildly, is cunning. And simply, does not know what is at stake.

Due to the exceptional cost of high-precision weapons, size and displacement are not any significant parameters in assessing the cost of a warship. By the way, the landing "Bob Hope" cost five times cheaper than six times smaller in size "Arly Burke."

To add a displacement 4000 t, you will have to add another 40 meters to the length, the ship already looks more like a canoe than a destroyer. This is not an option. Increase the width. Then the resistance of the underwater part of the hull will increase, and we will lose the course, besides, more armor will be required, and such a ship will not get through the canals. Increase the draft. But where is more? And, again, lose the move.

In the same article, a respected shipbuilder stated the exact opposite:

That is, the problem with the "extra" 4000 and even 5000 tons somewhere suddenly "evaporated."

With the power plant, I will not think much and say that there are gas turbines with a total power on the 100000 hp, as in the Arly Burke. The “Zamvolta” power plant is about the same power, and it will allow the ship to accelerate to 30 nodes.

If N. Dmitriev had thought a little stronger, he would have noticed that the speed and the required power of the EI weakly correlate with the displacement. It is for this reason that the heavy cruisers of the war years, being twice the size of modern destroyers, were content with EE of similar power (the difference is in the range of 20%). Moreover, those heroes of the past were faster than any modern destroyer (33 + Uz.)

Reservations from the sides of the engine rooms. Need it? Need to. One MO in length is fifteen meters for such ships, and usually two of them. The easiest way to make a citadel. It turns out that if you book at least the height of 5 m and the depth of 1 m from the waterline, you need approximately 500 m2 armor, it is 500 tons of weight.

This weight must be compensated, and a simple equivalent increase in displacement will not work out. We'll have to put the ballast in order to return the value of the metacentric height of the ship back and preserve the original stability. If we assume that the total center of gravity of the armor will be higher than the center of gravity of the ship somewhere on the 5-10 m, then we will have to lay a ballast of equivalent weight on the bottom. This means that the weight does not increase by 2000, but by all 4000 tons. And how can this be compensated? Throw out unnecessary equipment.

Why this set of reasoning, if it contradicts the obvious? Whatever modern shipbuilders are babbling now (and without giving any concrete calculations), the fact remains: в stories there were well-protected, well-armed and, at the same time, extremely high-speed ships! At the backward technological level 20's. last century. Who does not want, is looking for reasons, who wants is looking for opportunities No need to tell horror stories about stability and metacentre. If contemporaries do not have enough knowledge and even just the desire to assess the situation from a different angle, turn to the engineers of past eras. 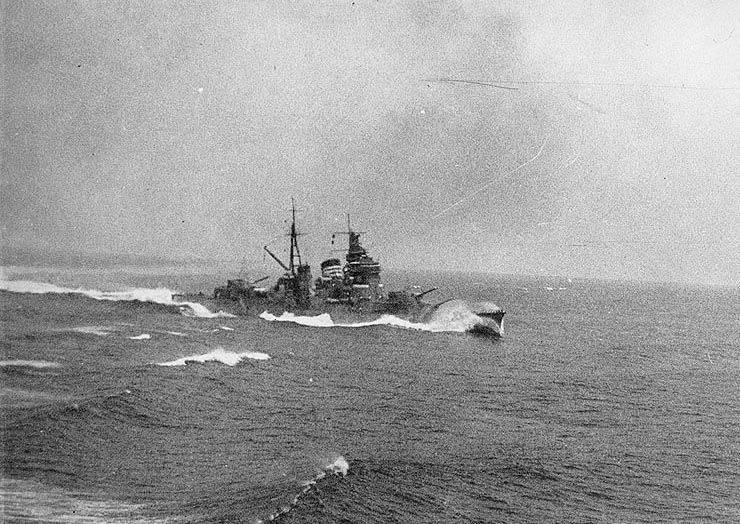 Total displacement 15,5 thousand tons (almost like the destroyer “Zamvolt”). Power GEM - 130 thous. Hp Speed ​​(depending on mod.) - up to 35 nodes. Naturally, more than any modern ship.

What happens if you remove five towers of the main caliber from the “Miko”, 12 boilers “Kampon” and other rusty junk, while reducing the crew of the cruiser 6-8 times.

In return - a hundred compact units of UVP and radar AN / SPY-1, coupled with highly efficient gas turbines.

Probably, the ship will immediately overturn?

Of course not. Why should he overturn. The modernized “Myoko” has a free load of thousands of tons. And the mass of options, how to dispose of it (including spending on improving security).

Someone will say: impossible! In this case, we must admit that all the last 90 years, progress has moved in the opposite direction.

“Myoko”, being an ugly and imperfect “Washingtonian”, anyway, already carried some reservation (mm belt 102, armor 35 mm). Weak? But we have in reserve - thousands of tons of reserve load! With the complete absence of international restrictions on w / and warships (that is, if necessary, you can easily bargain a couple more thousand tons).

All the power of modern technology is available.

Million all sorts of solutions!

“The rocket will make a slide and crash into the deck.” So what? Does anyone naively believe that the creators of the “armored approach” will not take into account in its design the most obvious threats of our time. Who ever said that his appearance and layout will resemble cruisers 90-year-old? And who decided that horizontal protection will be weaker than vertical?

Will the ship tip over? Problems with stability. Yes, hell with two!
The narrow, long and unstable “Myoko” dragged five towers of the main caliber 203 mm. This is even cooler than any armored decks. 1000 tons, but not on, and OVER the top deck!


“Superstructures will collapse,” “add-ons will not be booked.”

And who ever decided that a modern ship needed any massive superstructures?

Here is my question to my esteemed opponent: what equipment requires placement in the superstructure? Which of the systems there cannot be placed inside the case? The lack of volumes is solved by increasing the width of the body by a couple of meters.

The armor itself also costs big money. The price is usually negotiable and depends on the steel grade and the size of the sheets needed, but the price limits can be determined. One ton of armor plates costs approximately from 300000 rubles.

An insignificant item of expenditure. The whole body with armor - 10% of the cost.

Their guidance radars are still vulnerable. Communication antennas can not be removed from the add-in. Auxiliary radars too. When a rocket hits the superstructure, we still lose a lot in combat effectiveness, go blind by half the eye and go deaf by half the ear, but still we will be able to somehow fight ...
... if they have no particular advantages, but they are more expensive?

“Ah, figs with him. Let it sink, ”said Herr Admiral and hung up.

And do not care that on board the damaged ship there are still 200 people (many of whom are highly qualified specialists). And unused ammunition worth half a billion dollars. + small things: turbine power plant, consoles and servers BIC, generators and electrical accessories, helicopter and many other useful and expensive property.

Let it sink - the radar was barely the first to shatter. And before that, even if it burned from the wreckage of a downed rocket (a curious incident with the frigate Entrym, 1983)

The absurdity of this approach is obvious and does not require additional clarification.

Finally, the ability to withstand one hit more than the enemy, and as a result, winning is priceless.