Kurds, whose will you be? 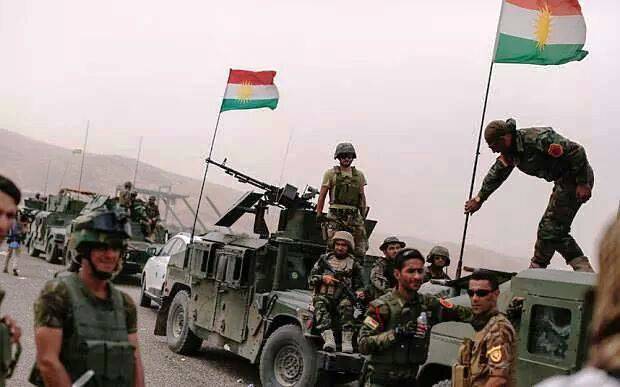 Recently, the press can often find references to the Kurds and their PKK - the Workers' Party of the Kurds. In a good context. Possible if not allies, then those with whom you can be friends against Turkey.

And who are the Kurds?

In general, we know them for a long time. Those who studied in the USSR "passed" them like Medes. And the first mention of the Medes or Medes refers to the year 2500 BC. In general, the indigenous inhabitants of Central Asia and the Middle East are historically.

That is, the Kurds actually have more rights to those territories that the Turks consider "theirs". And for many years waging war. A kind of war, and not really covered anywhere. In general, the Kurds are the world's largest (40 million) people, deprived of their statehood.

The Kurds were to receive statehood under the Sevres Peace Treaty of 1920, which decided the fate of the Ottoman Empire, which lost in the First World War. But the world powers in the face of Britain, France and the United States simply deceived the Kurds. Independence did not happen.

Twice in the 20th century, the Kurds acquired statehood — and both times it was connected ... with the USSR. First, the Red Kurdistan (Kurdish national district with the center in Lachin) was created in the 20-s in the South Caucasus, but in the 30-s the Red Kurdistan was liquidated, and a significant part of its population was later deported to Central Asia and Kazakhstan. In 1946, the Kurdish Makhabad Republic was created in Iranian Kurdistan, in the control zone of the Soviet troops, but in 1947, after the withdrawal of the Soviet troops from Iran, the Shah regime drowned the Mekhabad Republic in blood. In Iraq, the Kurds as a result of stubborn struggle from the end of 50's. then sought autonomy, then again lost it.

And for many years now the Kurds have been waging war for the formation of their state. Mostly with Turkey.

Kurdish Workers Party (PKK) - the party, the voice of the Kurds. But there are still many other, smaller parties, united under the banner of AONK - the Army of the Liberation of the People of Kurdistan. A diplomatic instrument is the Front for National Liberation of Kurdistan (FNOK), created specifically for the purpose of carrying out political and diplomatic work outside of Kurdistan.

The Turkish government and the Turkish media, and with their submission and the media of the NATO countries, never speak about AONK at all, trying to put things in such a way that not regular guerrilla units fight in Turkish Kurdistan, but the PKK terrorist gang. However, AONK is precisely a regular military formation, with its own command, headquarters, ranks, form, charter and documents. Consequently, under international law, these are combatants (that is, internationally recognized armed force).

International legislation clearly differentiates between "combatant" and "terrorist". In a number of European capitals, official representations have been opened of the Front for National Liberation of Kurdistan - in essence, the political wing of the AONK.

In other words, many European states have recognized the TNFK (and, consequently, AONK) as a belligerent. Under international law, this gives the national liberation movement official status and is the first step towards diplomatic recognition.

So talking about the Kurds, as about some partisan troops in the mountains is not serious.

Turkish propaganda carefully ignores the fact that the PKK, FNOK and AONK are not at all trying to "reject part of Turkish territory." In 1993, the PKK adopted an official doctrine that aims to turn Turkey into a federal state with equal rights for all nations. That is, the PKK is not at all separatists, they are fighting for the creation of a new, democratic, federal Turkey.

In Turkey, I note, lives about 30 millions of Turks. And about 20 million Kurds. Talking about a certain "Kurdish national minority" is also inconvenient. And if we consider that about 20 of millions of ethnic Greeks live in Turkey, it is generally difficult to say who the minority is.

The PKK considers the ruling regime in Turkey to be fascist, pointing out that the genocide on the national (racial) principle is just one of the signs of fascism, and that the ruling coalition in Turkey includes the Nationalist Movement Party - an ultra-right organization whose combat units are called "gray wolves."

The symbol of "gray wolves" - folded fingers in the face. This sign was shown by the killer of our pilot.

It should be noted that the Turkish authorities refuse to recognize the fact of the existence of indigenous minorities in Turkey (the existence of non-indigenous, that is, immigrants - Albanians, Muslim Bulgarians, Lezghins, Abkhazians, Chechens - is recognized). Kurds, according to the official version of the Turkish authorities, are not Kurds at all, but “mountain Turks”, “wild and forgotten their language”, although the Kurds have been living on these lands for more than 5 thousands of years, and the Turks came to Front Asia only in the XI century. In the same way, Assyrians, according to the official Turkish version, are not Assyrians, but “converted Christians”. Quite a comfortable position, and here's why.

Turkey refuses to recognize the fact of the genocide of Armenians, Assyrians, Greeks and Kurds in the Ottoman Empire during the First World War (in total, over 3 million people became victims of terror then). And since 20 in the Republic of Turkey, the victims of the genocide have been at least 4 million Kurds (which Turkey, of course, also denies - because "there are no Kurds in Turkey").

It is clear why the Kurds do not have affection for the Turks. But since the distant 1999, there has been a truce between the Kurds and the Turks. It was observed because the leader of the PKK, Abdullah Ocalan, was captured by the Turkish special services (with the support of colleagues from the United States) and sentenced to death. Which was replaced by life imprisonment.

The reason for the termination of the ceasefire was the actions of the Turkish armed forces, which inflicted several aviation strikes allegedly on the positions of Islamic State militants on the Syrian-Turkish border.

Thus, the Turkish leadership has shown that for him the Kurdish national liberation movement is an equivalent adversary, and the Kurds represent almost a greater danger to the Turkish statehood.

Officially, the Turkish leadership stated that attacks on Kurdish positions were aimed at protecting the national security of the Turkish state. Therefore, the leadership of the Kurdistan Workers' Party and reported that the ceasefire agreement has lost all meaning in the current political situation. This statement of the PKK was a signal for action for the numerous Kurdish opposition, including in Turkey.

Today, the PKK is fighting on two fronts: on the one hand ISIS, on the other - the Turkish army. What does not prevent the Kurds armed only with light weapons successfully resist the Turks and IG fanatics. Moreover, the Kurds are even winning victories on their fronts.

Ocalan has repeatedly stressed that the problems of the national liberation of Armenians, Assyrians, Arabs, Greeks are of no less interest to him than the problems of his own Kurdish people. This brought quite expected results. 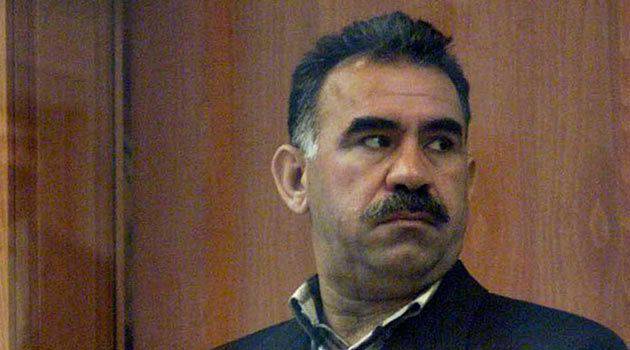 Armenians, Arabs, Assyrians, Greeks, as well as numerous foreign volunteers, as a rule, representatives of radical left-wing organizations in Europe, Latin America and Asia, are fighting in the ranks of the Kurdistan Liberation Army. 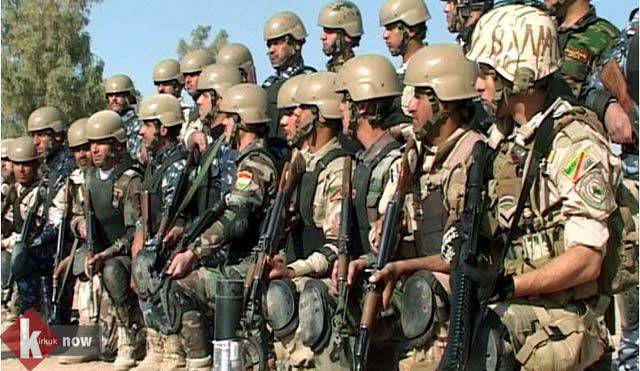 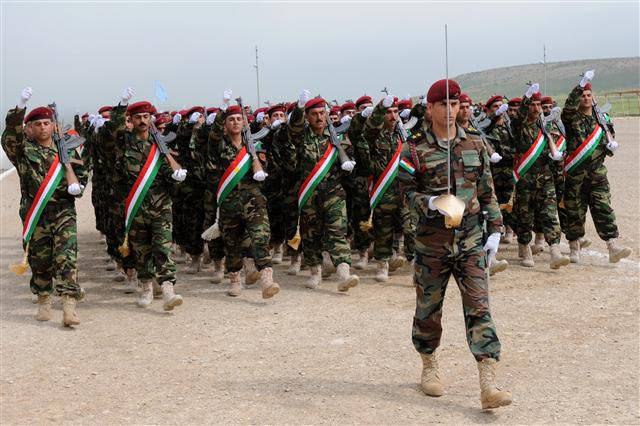 A large role in AONK is played by women, who make up a significant part of Kurdish armed formations. Ocalan has always stressed the importance of equal rights for women and called for the abandonment of the tradition of reducing the role of women characteristic of Kurdish and Turkish society. According to some information, in the armed forces of the Syrian Kurdish Peshmerga militia, women make up 40% of servicemen. And there are separate women's battalions AONK. 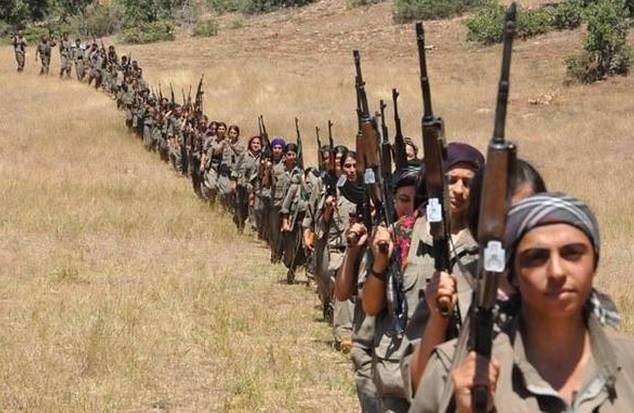 The Kurdish question was the stumbling block that prevented the Turkish arb from rolling into the European Union. In fact, abandoning the EU and solving Kurdish issues, Erdogan chose the way of blackmailing Europe with the help of refugees. But the Kurds remained.

Stubborn people, if so look. Hundreds of years of wars, and wars for a real dream. And the dream seems to come true. There are already in Iraq, Northern Kurdistan. Quite autonomy within Iraq. By the way, it was the Kurds, more precisely, the use of chemical weapons by Saddam Hussein against them and became the straw that broke Hussein’s back.

I note, however, that in 1999, the Turks under President Demirel also worked on the Kurds with chemical weapons. But Demirel - not Saddam, got away with it.

Some result. The Kurds are not a handful of partisans in the mountains, as the Turkish media want to present. This is 40 of millions of people, clearly representing what they want. These are not religious fanatics of ISIS, absolutely the opposite. This is Sunni, and Shia, and Alawites. There are Yezidis and Christians. That is, there is complete tolerance within the people, which is good news, and is rather an exception to the rule in the East.

The East is a very complicated matter, but since Russia got involved in the solution of Middle Eastern problems, it makes sense to recall that we were co-creators of Kurdistan twice. And in Russia there is a saying that God loves a trinity.

Ctrl Enter
Noticed oshЫbku Highlight text and press. Ctrl + Enter
We are
Turkey against the Kurds. Is there a new phase of conflict ahead?Syrian Kurdistan: Will there be peace and freedom?
48 comments
Information
Dear reader, to leave comments on the publication, you must to register.