Among the newfangled means of self-defense, one can especially note the stun gun - seemingly effective weapon. But is it really effective? What are stun guns? How to choose them, on what grounds, and whether to choose at all? Read the new article in the series "For urban self-defense." So, EShU - electroshock device. 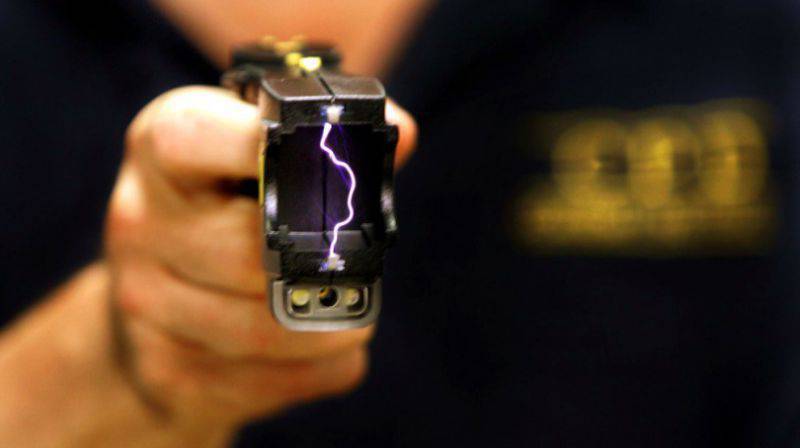 - Contact: for impact on the aggressor, it is necessary to attach a stun gun with electrodes to its body and hold for at least 3 seconds for a full impact.
- The remote (shooting) stun gun can be used from a distance (which is safer). Such shockers (tasers) are used by American police. When fired, two harpoon electrodes connected to the DESU by wires fall into the aggressor and transfer the discharge. The maximum shot distance is 4,5 m.
- There is a hybrid option: a remote-contact stun gun, which can be used with close contact and from a distance.

Most shockers are divided into 2 categories:

- "Flashlight" - stun gun disguised as a large flashlight. Such a device can also repel attacks, especially considering that, as a rule, they have a shock-resistant body. Two in one. But you won't go to the theater with that.

- Shocker standard form (like an electric razor). Such shockers are more suitable for women because of their miniature form, so that they can be carried in a purse. The power of the shocker does not depend on the size.

The power supply of the stun gun is a battery or battery.

- Batteries a little more powerful. The battery can be charged only once a year. Full charge takes about 6-8 hours. But this is if you do not use it. After each use, a full charge is required.
- The batteries need to be changed every 8-12 months, if you have not used a stun gun, or after 20 discharges.

In our time replete with technical innovations, each manufacturer is izgalyatsya, not knowing how else to attract buyers. May soon be selling electric shockers with built-in WiFi.

It is strange why there is still no device that simultaneously gives a discharge of current, a stream of gas, a flash and cotton. And selfie memory.

- Power - measured in watts (or joules per second).
CAUTION! Many manufacturers overstate the power of shockers, which is actually not true.

The developers of high-frequency stun guns chose a different path. Their products with sparking frequency over 100 Hz are intended for paralyzing the attacker. But these developments are not without flaws. For example, in order to neutralize the enemy with a high-frequency model, you will have to press the shocker against his body for 1-2 seconds. The higher the frequency, the easier it is to increase the voltage.

Also, all stun guns are divided into 3 class, depending on the output voltage, power and effects of the application.

6. Presence of a fuse

- Some models of stun guns have fuses, which on the one hand is justified by safety, on the other is another obstacle to self-defense (you need to have time to pull out the shocker, and even "remove from the fuse."

- Models without fuse usually have a cover, which is also a kind of protection of the owner of the ESD.

- In the West, stun guns have been used since the beginning of the 20 century. The stun gun was loved by law enforcement officers, as it helps to detain the suspect without causing him injuries. Later, enterprising manufacturers began to produce shockers for "civilians."

- Electrical discharges are best directed to the solar plexus, groin and axillary areas.

ATTENTION - physical contact with the aggressor, to which you have released a discharge, is harmless to you. You do not hit a current.

- Absolutely legal, as a non-lethal weapon. Can stop almost anyone (shooting type - "taser")
- You can use in a closed room, paralyze for a time specific aggressor.
- Can be used in any weather (snow, wind, rain).
- It scares off dogs quite well (especially Chinese-made models that pop out loudly), because when the discharge comes out, ozone forms, which animals do not like.

- Poor acting through clothes - contact with bare skin is needed. On stun guns there are spike electrodes, which in theory should pierce the attacker's clothes, but can they pierce a thick winter jacket or sheepskin coat? We do not have Hawaii. (Although, there are shockers with the stated penetration ability of 6, see - but it should be understood that manufacturers like to exaggerate.) In the case of a shooting shocker, again, it is necessary to get into the skin.

- Time limit - contact with the body of the aggressor is necessary for at least 3 seconds (contact version)
- By the way, it is forbidden to beat a person into the head of an aggressor.
- Batteries and accumulators are usually operable at temperatures not lower than -15 ° С. But, let's say, an authorized knife is effective at almost any temperature and does not require recharging at all ... and does not allow any misfires ...

And, finally, the fattest minus:

- Due to restrictions under the laws of the Russian Federation, the effective version is available only to law enforcement officers (for example, 'AIR-107U' (10 watts). As for civilians, however, only low-power versions are allowed, which are more likely to annoy rather than stop a criminal (allowed power is no more than 3 watts (or 3 J / sec.) and voltage is no more than 90000 volts. Figuratively speaking, Saiga instead of AK-74. Some self-made cars risk removing limiters, increasing the power of the shocker, or even making an ESL independently, but we can not recommend this it.