Weapons of the XXI century: only ideas

December 9 2015
49
On the covers of the American magazine Modern Mecnix, at one time, so many images of various fantastic machines were printed, and what machines, that when you look at them, the thought involuntarily creeps in, and ... did those who published this magazine have “all at home”? In addition, they did not spare the red paint, so these covers (and the cars too are red!) Were visible in the kiosks from afar. But be calm, they all did the right thing with regard to the red paint (it’s said that the red is “fools love!”) And with incredible pictures. Although not much of this has been realized, but ... these publications certainly gave impetus to the imagination and fantasy of many people.


And now I would like to play the role of a “generator” of the same ideas. All of them are based on something. Their parts (like puzzles) work separately. Will they work just as well if they are put together? Naturally, I do not know this, I am not that kind of a specialist. But ... this is not known, and many, so to speak, recognized experts to whom all this has been shown. They had the answers: “Yes, we must look!”, “Yes, what will it look like in metal ?!”, but no one has the money either to “look” or “on metal”. Well, what happens. Then let VO readers look at all this and draw their own conclusions. 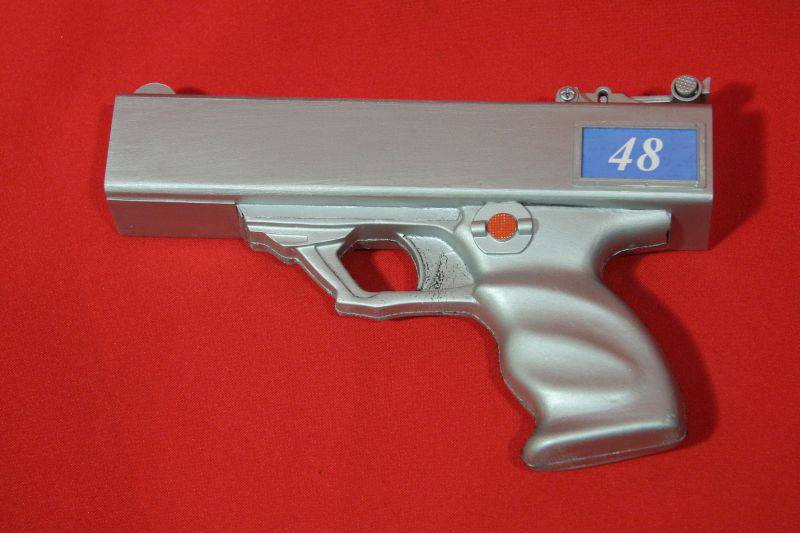 Pistol printed in 3D plastic printing technology. Sophisticated sight on the barrel block, of course, solely for the sake of beauty!

So let's start with ... a pistol printed out in plastic 3 technology. In the United States, this has already been done and shot (which, by the way, IN has already written), and the Colt pistol of the 11,43-mm caliber has already been completely “printed” into metal 3D. Yes, it came out expensive - something around 2000 dollars apiece and it took a manual "to bring to mind." But this is only the beginning. In the past, the material about the “paper gun” was about the fact that the gun turned into weapon status, that even the American cops according to statistics, remove it from the holster only once every seven years, and are used once in 17 ...

But the industry also does not stand still. Computers are increasingly entering our lives, so the weapon must also be a shooting computer in the future!

So, we print the whole gun in high-strength plastic 3D, well, let's say the one that goes to Glock-7 or its equivalent. The basis of it is a block of trunks, in which, depending on the caliber, there can be both 9, and 13, and 25 channels. Each channel can contain from one to five cartridges inserted into it one by one. Since the pistol does not have a bolt, these channels (trunks) with the same dimensions as conventional pistols have a greater length, which is always good, isn’t it? Well, 3D printing will help to print them in such a way that they all will look at one point at a distance of 50 m, so that the accuracy of shooting from it will be quite high.

Charges are Teflon cartridges, and in addition to the feathered bullet (the barrels are not rifled, but smooth, so the plumage for the bullet is necessary!), There is a powder charge (in running space), a microchip activated by microwave radiation, and a pilot coil. And that's it! No mechanical connection with anything, no moving parts. 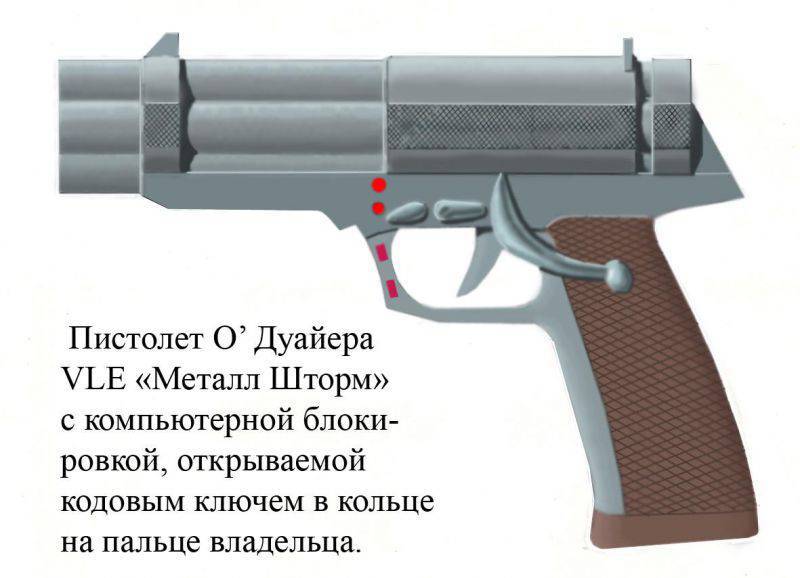 In the handle there is a control panel for warheads, which in essence is nothing more than the most common mobile phone. Drive - touch, in the area of ​​the trigger. The fuse can also be touch, and maybe electronic: a tiny microchip implanted under the skin at the base of the thumb of the right hand. Here is the battery and the famous "red button" villain Zorga from the movie "The Fifth Element". It serves to communicate with the computer in the handle. Slightly above is the LCD screen, which displays the amount of consumed ammunition. Pressing the red button initiates the destruction of the gun by blasting all charges. It is clear that if you accidentally press it, he will ask you again, and you will have time to cancel the command, but only after a few seconds the gun will be exactly destroyed.

“Mobile” in the handle when you press the touch descent (short one shot, long - turn) sends a signal to the microchip of one of the bullets according to the program. It is initiated, a current arises in it, the current burns through a spiral, the charge ignites, a shot follows. Since all the bullets through their cartridges abut one another, then no deformation during recoil occurs.

Australian designer O'Dwyer has long figured out that overheating with intensive firing will not occur, but “just in case” the cooling system is provided in the gun: narrow through channels between the barrels. Powder gases, flying out of the trunks, create cravings (as in the Lewis machine gun) and thereby cool the block of trunks from the inside. The more intense the firing, the stronger the cooling! But he has bullets when firing in the barrel "swell up", which prevents the breakthrough of gases. This design is both simpler and more reliable.

Starting at the service, the person to whom such a pistol is laid tests it and ... uses it, then hands it back to the part where he is put on recharging. Shoot 12 charges (and the computer in the grip recorded everything: year, month, day, time), returned ... and continue to serve with it. Shoot 50% of charges or more - you hand it over to the training unit, and you get a new one instead. Moreover, the block of trunks (as already noted) may have different calibers - 9-mm, 7,62-mm, 5,56-mm - depending on the need and in addition it can be replaceable! So in a combat situation a fighter with such a pistol can have two interchangeable units and 96 charges with him. With a caliber 5,56-mm - 125 shots in the block, and only 250 shots! 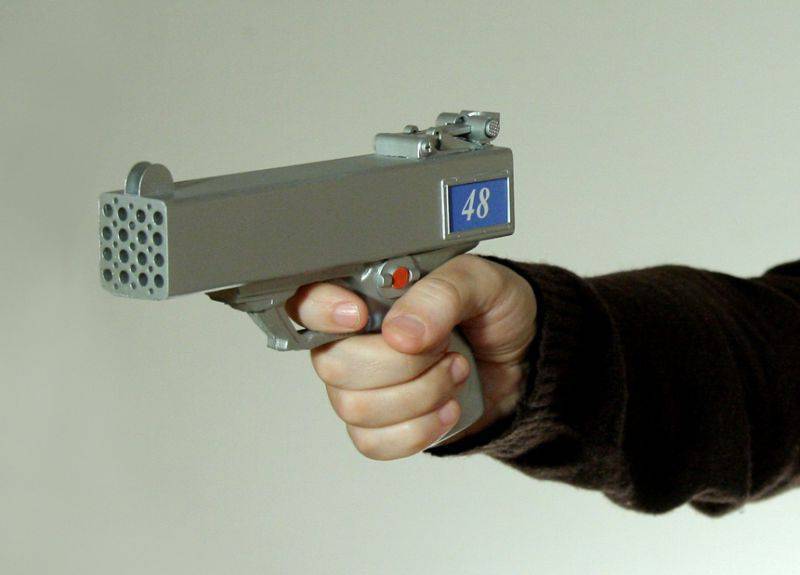 Well, a completely shot pistol is surrendered for disposal, which implements a very important disposability principle: “Defective things are bought more often!” That is, for the military industry, this is simply a find! Although options are possible. For example, this solid pistol is designed for only five shots from each barrel and that's it. But it is possible, as noted above, to make it with interchangeable blocks, and then only blocks will be disposable, and the gun itself can serve for a very long time.

Finally, the trunks in the plastic block can be reinforced with metal tubes, respectively, strengthening the directional radiation of the control panel. Then it can be recharged many times, simply stuffing the cartridge for the cartridge into the barrel. It is clear that the charges of gunpowder in them should be different. In the very first, to be larger than in the latter, in order to ensure the same ballistic characteristics of the shots and reduce the variation in the initial velocity. But in mass production it is easy to do, but in order to distinguish between cartridges, they can be labeled with numbers and color! 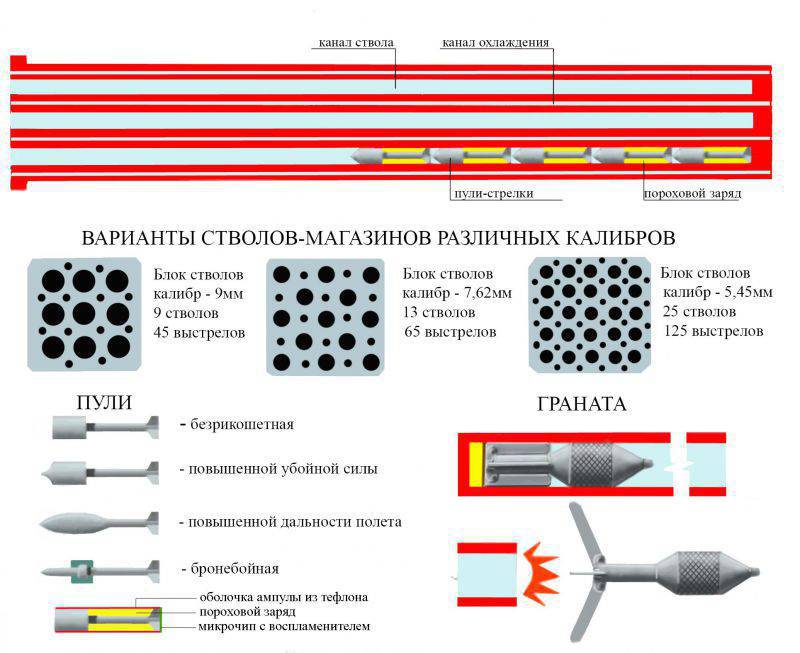 Let's fantasize a little more. What if at once two such cartridges are placed on a carriage in a swivel mount, one forward, the other back, and the butt attached to it behind it? It turns out ... an assault rifle with a very large ammunition. It has a display showing the number of shots taken, an optical and television sight with a conclusion again on the same screen. Shoot the first block of trunks, turned the swivel mechanism on 180 degrees and shoot from the second! Moreover, instead of blocks with bullets into it, you can charge blocks with grenades and turn it into a grenade launcher. The charge is small, only to throw the grenade out of the barrel, and then a small rocket “engine” carries it further to the target. 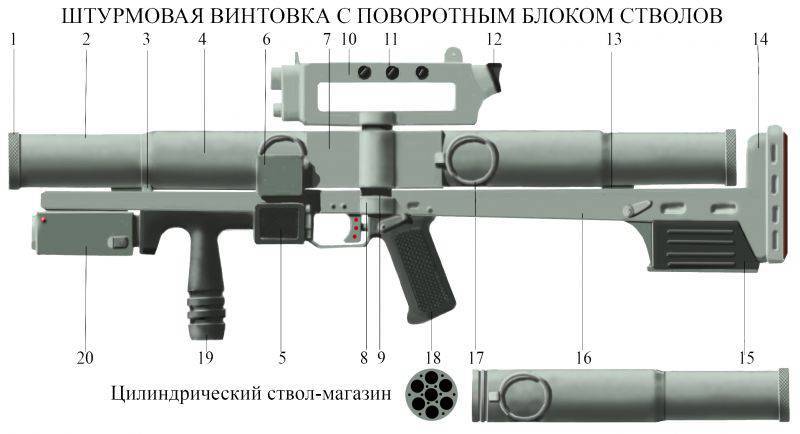 1 - grooved coupling at the end of the barrel assembly; 2 - block of trunks; 3 - front stop replaceable barrel on the gun carriage; 4 - thickening of the block in the area of ​​placement of charges; 5 - display; 6 - display lid, 7 - breech of mounting of the barrel units; 8 - breech clutch; 9 - rotary axis breech; 10 - carrying handle; 11 - control buttons sight; 12 - a video camera and optical sight sight; 13 - rear stop replaceable barrel on the gun carriage; 14 - emphasis in the shoulder; 15 - battery; 16 - carriage; 17 - ring for mounting a removable barrel on the ammunition; 18 - front handle; 20 - tactical flashlight or laser pointer.

But the most interesting thing is that the swivel base of the block can be moved forward along the carpet all the way and there ... unfold in a perpendicular position and so secure. Why do you need it? But why - shoot from the corner! The camera on the handle of the sight transmits the image to the display, you put out your T-shaped "something" and shoot. And in this position the fire is fired simultaneously in both directions, which is achieved - yes, yes - the recoilless shooting! Of course, this is not very convenient, it will be necessary to glance also in the opposite direction. But in the war in general, you need to be careful to stay alive. But you can perfectly shoot from the corner, and you will not be visible at all!

Once again I want to emphasize that all this is nothing more than ideas that may never be realized. But many of them are simple, elegant, are in the trend of development of modern science and technology and ... why not express them in this case? Time will tell what will be so, and what is completely different!