Death can not be: Malletra Mallet

December 8 2015
22
Many VO readers liked the story about mortars of different times and peoples, but they thought that such a miracle of the technology of the nineteenth century, like Mallet’s 920-mm mortar, should have been told in more detail. Well, we fulfill their request.


By the start of the Eastern War (1853 – 1856) in 1853, the UK’s most powerful and heaviest land gun was an 13-inch mortar that could shoot 167 pounds shells. However, it soon became clear that something more powerful was needed for the Crimea, and talented English engineer Robert Mallett wanted to design this very “something”. Since such a weapon was too big, he decided to make his huge mortar sectional, so that it could be delivered into place and assembled in pieces. This was the way to solve such an important problem as the laboriousness of delivering heavy weapons to the battlefield, which, to top all other difficulties, was also impeded by the lack of roads. However, Mallet's ideas were too much at odds with the practice that existed at that time and caused distrust among the military.

Mallet's first project was dated October 1854 of the year. According to him, he wanted to do without “pillows” of wooden wedges or bars, which were usually placed under the muzzle of the mortar when aiming it at the target and in order to give it a specified elevation angle to the trunk, and focusing directly on the platform. He also proposed to make it out of three rows of hewn logs, stacked crosswise over each other, in order to fix the trunk on it at an inclination of 45 °. 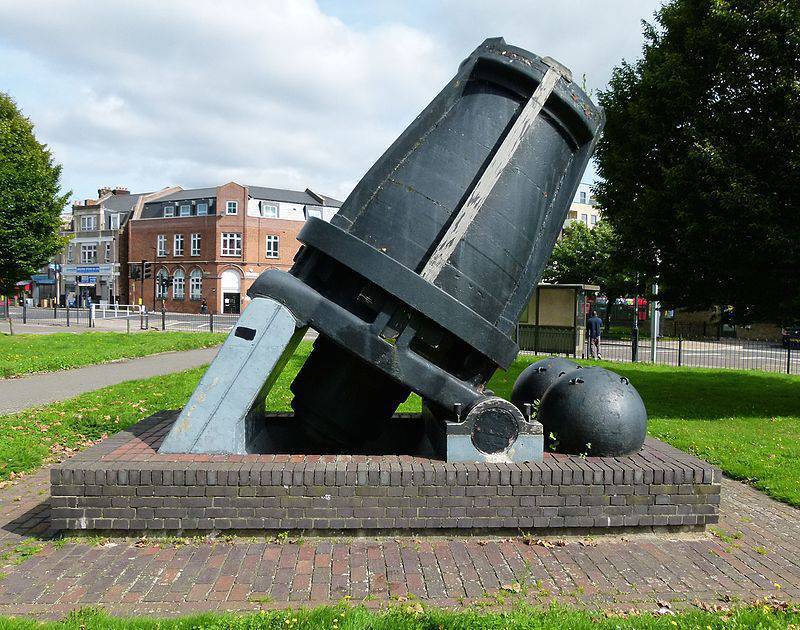 In December 1854, he presented his project to Captain Boxer, who later became famous for creating his own rifle cartridge, and other experts from the Wulwich Arsenal. But already in January, Mallett realized the importance of applying such mortars not only on land, but also at sea, and found it necessary to increase the functionality of his creation as a whole. To this end, he changed the project and made the gun itself, let's say - “more perfect”, so that its placement does not require logs and allows to change its targeting angles to a greater degree.

The artillery retrofit committee reviewed its new proposal in January 1855. But he was not ready for such revolutionary innovations and concentrated all his attention on the fact that the proposed solutions were not tested in practice and were too unusual. Mallett was quickly fed up with all these quibbles, and he wrote a letter to 24 in March 1855 of the year to the Prime Minister of Great Britain, Lord Palmerston. On Palmerston new features weapons impressed, and he invited Mullet to an audience. Nevertheless, even an appeal to the “top” could not overcome the stubbornness of the officials sitting on the Committee, and they strongly hampered the implementation of his project. But Lord Palmerston was not used to giving in. Therefore, 1 May 1855, he told General (later Field Marshal) Hugh Dalrimple Ross, Lieutenant General of Artillery, that he was so confident in the success of the project Mallet, that he assumes the responsibility for its implementation as the Prime Minister of the Kingdom. 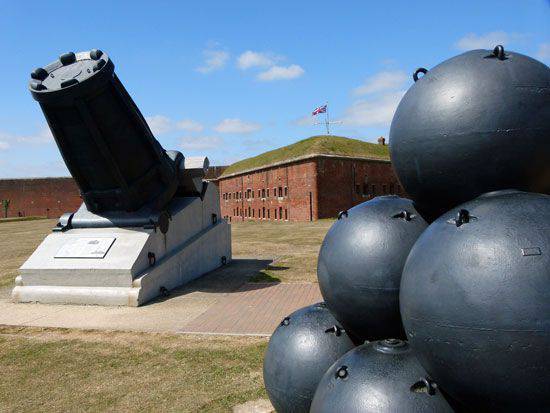 Only then the Committee on Artillery organized a tender for the implementation of the project. 7 in May 1855, the Thames Iron Wax Company of Blackwell, where the famous Blackwell frigates were built, said it could make two mortar designs of the Mallet in just 10 weeks after receiving an order at 4900 cost of pounds for each. If the weight in 35 t is exceeded, a penalty of £ 10 per ton should have been levied. The offer was immediately accepted, and the next day the order itself was made.

Meanwhile, the company's employees discussed all the features of the order and found that making castings, bending and welding the wide and heavy rings that made up the barrel of the mortar, the task is too complicated and may delay the execution of the order. Therefore, they suggested first casting square sheets of iron, and then cutting these rings out of them, thus not resorting to bending and welding, stating that they would agree to the project only if their condition was met. Mallett agreed to this very reluctantly, but nothing could be done. The work on making parts for mortars began on 11 on June 1855, and it took two weeks to prove the viciousness of the proposed method. The company had to abandon it, as a result of which it ... went bankrupt. Litigation began, contracts were concluded with the successors of the bankrupt, cost calculations, as part of the work was already done. As a result, three companies had to finish work on mortars: Meir and Co., Horsfall and Co. from Liverpool and, partly, Fawcett, Preston and Co.. The latter produced turning works, drilled and machined large castings that Horsfall and Co supplied to it. Not surprisingly, the delays followed one after the other. Only in March 1857, the work on the mortars was completed, and they were handed over to the government a month later in May - 96 weeks after the contract was issued and more than a year after the end of the Crimean War. That is, when these mortars were no longer needed. But despite this, 50 shells were also manufactured for them at a price of 16 pounds per ton, which were produced by Hood. 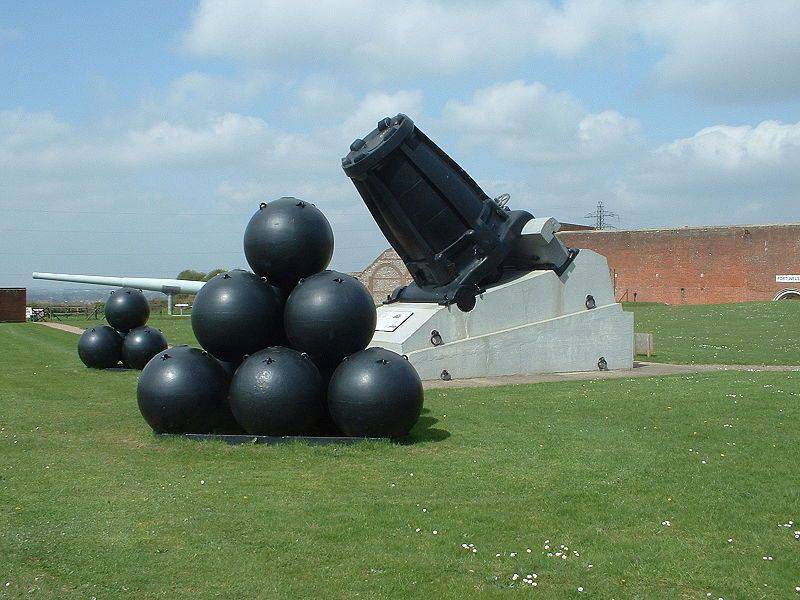 Mallet Mallet and shells to her.

The shells were of three types: light, medium and heavy, weighing from 2362 to 2940 pounds respectively. The powder charge in the projectile weighed 480 pounds. The propellant charge consisted of bags of gunpieces of 10 pounds in each and could not be calculated to be more than 80 pounds. The internal cavity of the bomb was slightly eccentric, so that when departing from the barrel the projectile would not tumble in the air, but fly the heaviest part forward. The fuse was a Twayse system, that is, it caused a bomb to explode from hitting the target, but could also be ignited by an ordinary fuse. 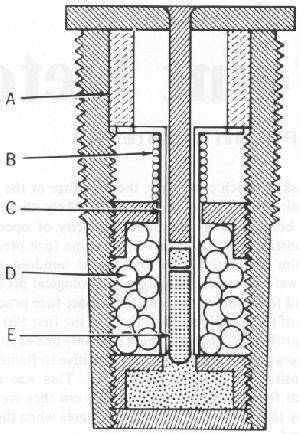 The “Theis” mechanical fuse for shells of smooth-bore and even rifled shells of the mid-19th century, causing an explosion when they hit an obstacle: A - lead ring, B - spring, C - safety tube, D - lead balls, E - glass ampoule with shock composition (explosive mercury and an additional charge of pyroxylin). The projectile was inserted into the barrel so that the fuse looked ahead. When fired, the ring (A) with the force of inertia bending or cutting the upper part of the safety tube (C); and the safety spring (B) threw it out of the projectile along with the lid, exposing a glass ampoule with explosive mercury and pyroxylin saber (E) to expose the lead balls surrounding it (D). When hitting an obstacle, the balls broke the ampoule, which initiated the explosion of the ampoule itself and the pyroxylin checker first, and then the main charge. True, sometimes shells with such a fuse could explode in the air!

Technologically, the mortar consisted of the following parts:

1. The bases are made of cast iron with a thickness of 30 inches and a weight of 7,5 tons. This part had pins, a flange for fastening longitudinal rods and a groove — an emphasis for a wedge-shaped support, which helped to establish the angle of elevation of the trunk. It also drilled a hole with a diameter of 37 inches down and widening up to 48 inches, and 13 inches deep.

2. The mortar chamber was forged from wrought iron with a length of about 70 inches and a weight of 7 t. Its maximum outer diameter was 36 inches - and decreased in three steps to 24 inches. It was reinforced with two layers of wrought iron hoops and one heavy hoop at the very end. The body - had the shape of a cone under the cast-iron base. The powder charge chamber was also tapered, had a depth of 48,5 inches, diameter from 14 inches at the base and to 19 inches "at the exit". The front of the chamber was a bowl-shaped for a snug fit spherical projectile.

3. The muzzle section of the gun in 80 inches was three large wrought iron rings. In turn, these three rings were assembled from 21, 19 and 11 narrower rings arranged so that a split connection was obtained. The largest hoop had a diameter of 67 inches, and a length of 19 feet; the smallest is 40 inches in diameter. The thickest place at the barrel was 16 inches thick, and the thinnest was 9 inches. 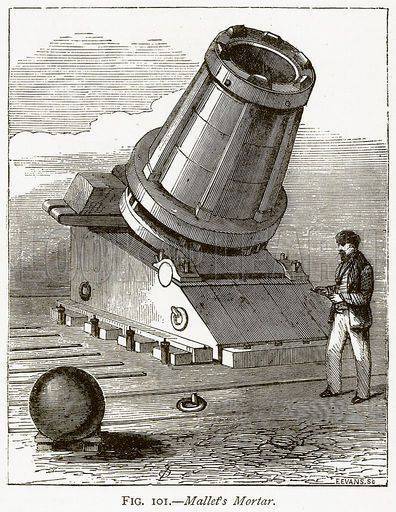 4. The six stranded wrought-iron rods of almost square section connected the upper stem ring and the cast-iron base, linking them together. The cross-sectional area of ​​each rod was 21 square. inch. On the basis they were fixed with wedges and dowels. The rods were included in the square sockets on the ring of the trunk, and held on it by spring ring locks.

In the assembly, the mortar weighed 42 t and was designed so that its heaviest part weighed no more than 12 t. This allowed the possibility of its transportation and assembly in the right place with the help of a crane. The mortar barrel was placed on a platform covered with an iron plate, which represented a support for two “pillows” - heavy wedges made of beech, allowing you to change the angle of the shot from 40 ° to 50 °.

Since peace with Russia had already been signed by this time, and even gravel for the “pillow” needed for testing required money, which, as always, was not enough, the Minister of War considered that only one mortar should be tested. October 19 began firing in the area of ​​the Plumstead marshes. After seven shots, one of the outer rings cracked, and they decided to stop shooting. Mortar was repaired for pounds sterling, 56 December 18, the tests were continued. This time, after six shots, the central hoop of the lower ring was torn. It was decided once again to repair for £ 1857. Meanwhile, the royal lab produced twenty lighter shells weighing over 156 pounds at the price of 2400 pounds sterling each. The shooting by them was launched on 11 July 21 of the year. However, several cracks appeared in a number of parts. These minor breakdowns were eliminated by the royal gun factory, and the shooting was repeated for the fourth and last time on July 1858 of the year 28. On this day, the farthest shot was fired 1858 yards with a projectile weighing 2750 pounds at an angle 2395 ° full charge of 45 pounds. The flight time of the projectile to the target was 80 seconds. However, then the failure of individual parts followed one after the other. And although the cost of repairs should have been only £ 23, the military refused to finance. Thus, 150 14 pounds of government money, including the cost of 000 shots, was spent on the entire project, at an average price of around £ 19 per pound - too much, they thought, a big price for a dead-end project.

Here and the largest mortar in the world has sunk into oblivion. Then the cost of armaments were not considered priority. The armies spent more money on oats than on cartridges and on feathers for shakois, than on finding new killing machines that the inventors almost forced on the military. Well, in the end, both mortars hit museums and exhibition grounds, where they stand on their concrete pedestals, surprising people with their appearance and recalling the talent of engineer Mallet, only a little (and fortunately!) Late for the battles of the Crimean War.