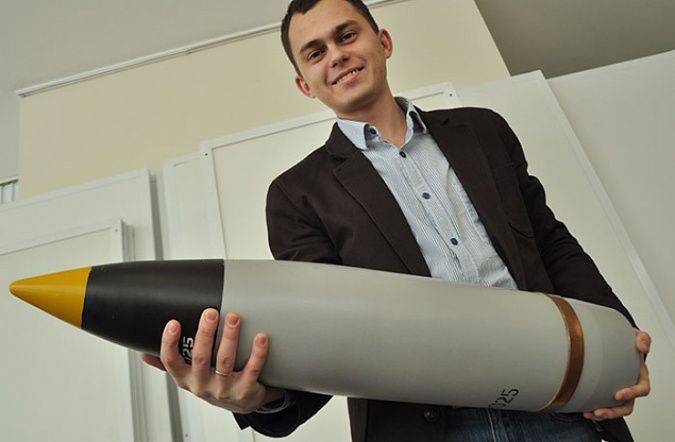 What is inside an atomic bomb and how does an atomic reactor work? And what do the space "scars" look like on board the rocket, and what are you thinking about behind the control panel of the Ruslan reactor? The curator of the unique exhibition "Nuclear Shield of Russia" that opens on December 3, Deputy Director of the Chelyabinsk Museum of Local Lore for Science, candidate historical Nikolay Antipin.


For the first time, about half a thousand exhibits left the closed cities, which will be located on the museum square in 600 square meters. 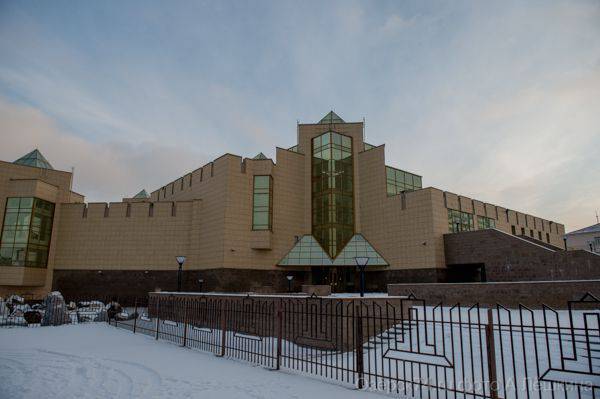 The building of the Chelyabinsk Regional Museum. Address: st. Labor, 100 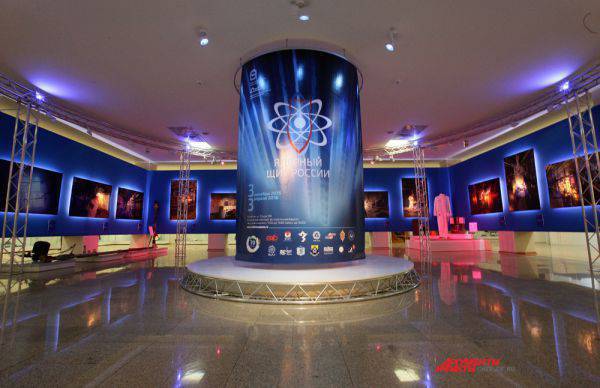 One of the tasks is to prepare guides. The Atomic Energy Information Center (Rosatom structure) has been operating in Chelyabinsk for the fifth year. This is where the museum staff will be helped, as it is available and interesting to provide specific information. In the conditions of the museum, alas, you will not show the “Tsar-bomb” or almost 20-meter rockets of the Makeyev Center of Russian Culture. However, people who are far from military equipment will not only be incredibly impressed by the exhibits, but will also be reassured in a certain sense: if there are people who invent such missiles, and if they are in service, then our country is safe. It is known that in the Chelyabinsk region there was a clear military-industrial complex: from "Mayak" from its production of filling, designing in the scientific center of Snezhinsk - to serial assembly at the instrument-making plant in Trekhgorny. Plus Src Makeeva. The exhibition will present all four "prohibitions".

“A year ago, we turned to all four enterprises - in Snezhinsk, Ozersk, Trekhgorny and Makeev State Labor Center, at each of which we thought: how and what can be taken out of the city,” says Nikolay Antipin. - We have offered our concept to the defense industry: an emphasis on popularization, on the importance of the fight against radiophobia. Immediately agreed: do not talk about any environmental problems and accidents. The exhibition should show the defense value of the region. At our request, at Mayak, a Ruslan control panel was prepared for the exhibition. We have long and carefully studied, and in the secret enterprises themselves, and security services. Convinced of the seriousness of our intentions, they gave "Dobro", and then the preparation for the exhibition, which lasted for almost a year, started, and we didn’t even present all the scale of the problems.

It all starts with geology, with the depths. It is no coincidence that visitors of the exhibition will see beryl, graphite, niobium, tantalum, plutonium, radium, zircon on it ... All this is the raw materials for the atomic project. A huge zinc ingot has already been brought from the Chelyabinsk Zinc Plant: many will probably see what it looks like for the first time. Indium and cadmium were brought in - everything that is used in the nuclear industry (in reactors) and that is produced in the center of Chelyabinsk. The man in the street is surprised, but the atomic project in the Urals did not start yesterday or even from Snezhinsk and Ozersk, but more than a century ago, from 1912, when the first radium expedition, initiated by Academician Vernadsky with the participation of Professor Fersman, took place. Studied deposits throughout the empire, they arrived at the Ilmensky mountains, where the so-called Academic course, which was developed in search of radium, was preserved. And for 14 years before, the Curie couple discovered radium itself.

In the 1940 year, Vernadsky wrote a letter to the leadership of the USSR demanding: now is the moment when it is necessary to study the uranium deposit and extract it, otherwise tomorrow it will be too late. We will show 5-cent and 10-cent 1943-44 coins of the year, in which microfilm with secret drawings were taken out. There was a false opinion: everything was stolen from the West, and nothing of the kind was done in the USSR. It was much more complicated. The Soviet, like the American, sciences developed very closely, and few secrets came out, except a defeated Germany, from which both sides borrowed experience.

In 1942, Stalin put the question squarely: who will deal with the atomic bomb? They proposed candidates: Ioffe, Kapitsa. The first is already for 60, Kapitsa is in close contact with Europe, and he immediately honestly admitted: he will not be able to keep secrets, and that he is generally for open science. One of the two of them suggested a young, budding Kurchatov. The task was not only to construct a bomb, but also to create an entire industry, and the young Kurchatov became, in fact, a top manager at the very top of the pyramid, where Beria himself stood below him. Before Beria, by the way, the project was supervised by Molotov, who did not cope with the task. And Beria managed. What kind of methods is another question.

“The exhibition says a little about Kurchatov: his personal belongings, a suit, a hat, a camera, have already been brought from Shem,” says Nikolay Antipin. - In addition to “Beard”, as Kurchatov was called, 30 bomb makers were chosen for the exhibition. 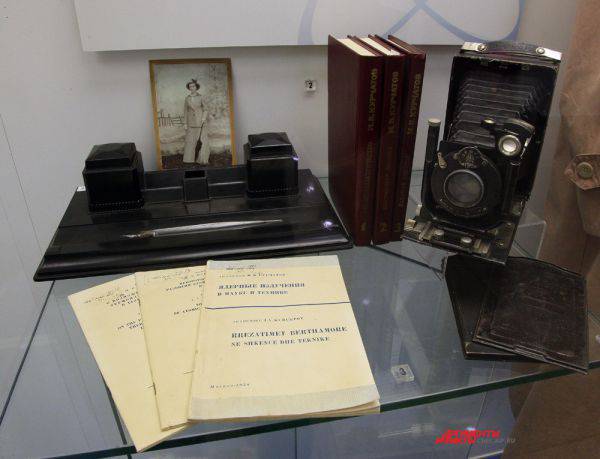 It is interesting that earlier the Snezhins themselves did not have the idea of ​​transferring to museums, for example, the personal belongings of famous nuclear scientists. And now they donated the tunic of academician and lieutenant general Zababakhin. By the way, in all encyclopedias it is said that he was awarded three or four orders of Lenin, and he, as we found out, has five of them. 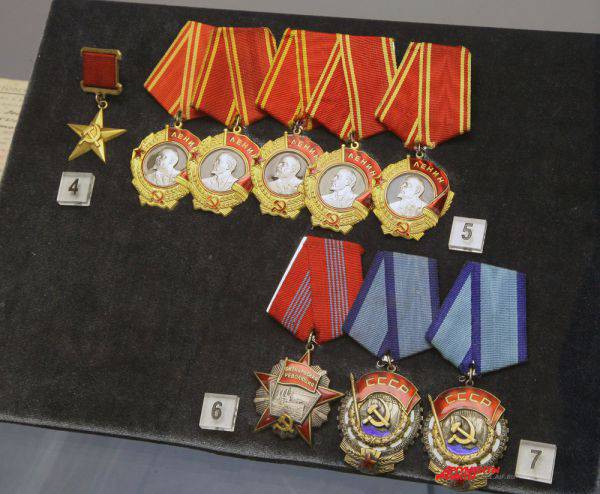 More than half of all nuclear development is provided by the Snezhinsk Institute. They have sea-based missiles, cruise missiles and aerial bombs. Therefore, we will have here the monoblock part of the first intercontinental missile, which was put into service in the 1974 year. It was mounted on the R-29 missiles, which were assembled in the Makeyev SRC. This monoblock part will be presented in two versions - exhibition and working (from the Training Center of Rocket and Space Technology named after Academician V.P. Makeev of SUSU). Scientists have provided the head part, which flew into space. 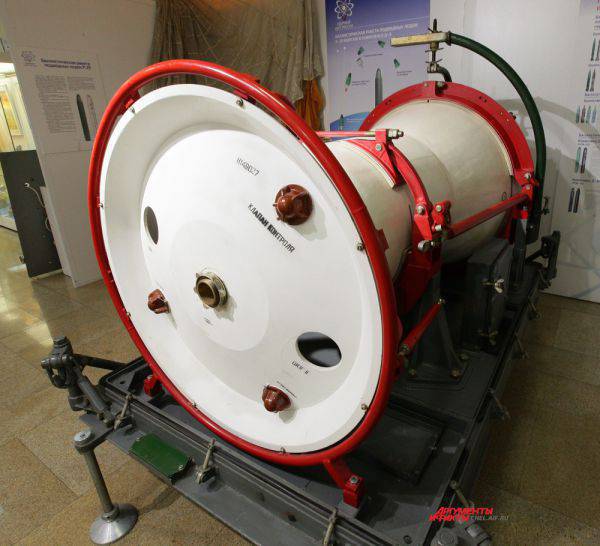 The head of the ICBM submarines R-29 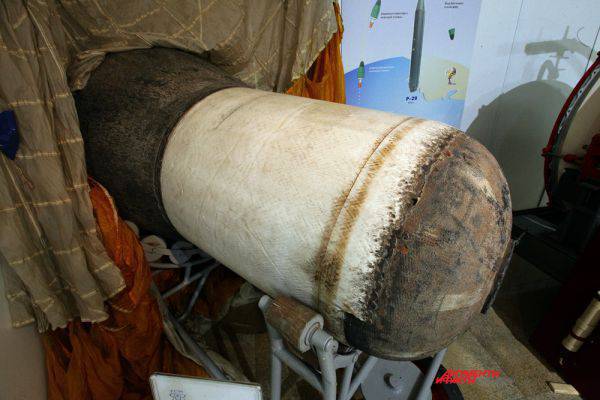 Also show a nuclear projectile used for industrial purposes. And this is also a special pride of Snezhinsk. Such shells were produced around 150, each of which was made clearly for specific purposes. 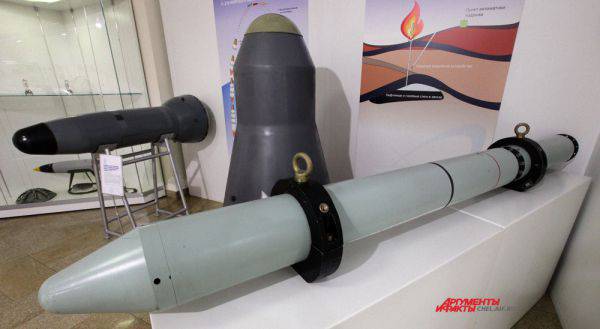 Sample 1968 of the year. In Uzbekistan, the Pamuk gas field is burning. Lit 32 of the month! Not only does a colossal amount of energy burn out before our eyes, a real ecological catastrophe occurs. They extinguished them in various ways, but without success. Snezhintsy suggested to drill a well parallel to the burning one, but inclined. So that everything was hermetically sealed, it is concreted, a nuclear projectile is placed into it and blown up. Gigantic masses of earth are shifting, which simply cover the well, and the fire immediately goes out. Elementary! At the same time, the task of Snezhintsev was reduced to the fact that everything was ecologically clean. And they achieved what is called a “pure blast.” Seismic exploration is another direction in which such a charge was used. This is due to the oil and gas sector. Where to store the produced gas? To build a huge reservoir underground is very difficult. It will take trillions of cubic meters. Invented a way. A loose soil is found in the earth's crust, where the projectile is launched, it explodes and a cavity is formed, gas is launched into it and it is launched simply and efficiently!

Gigantomania Khrushchev spawned a monster - “Kuzkinu mother”, weighing 25 tons. But the philosophy of the Snezhinsky Institute saved: the point is not in size, but in quality, in compactness and efficiency. The first projectile Snezhintsev was more than 400 mm. Gradually, the smallest nuclear artillery shell 152 mm, launched in the 1981 year, was born. Pride of the Snezhinsk Institute! In contrast with the "Tsar Bomb", it can look very impressive. 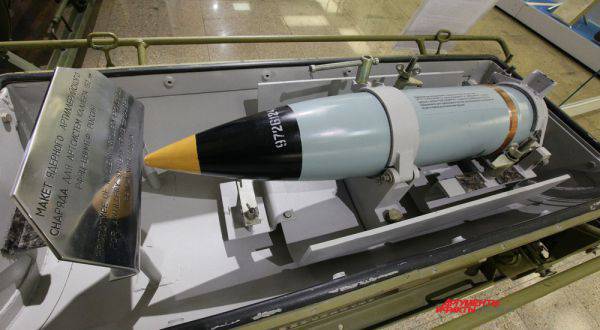 And this is the creation of the Trekhgorny defense workers, 203 projectile mm. 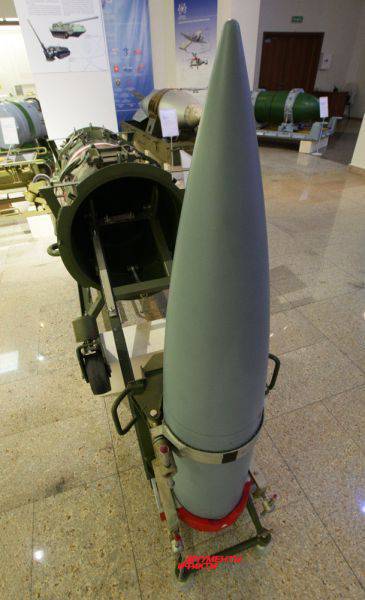 The warhead of the 1977 anti-ship cruise missile of the year, which was based both on ships and on the ground, is a homing missile. 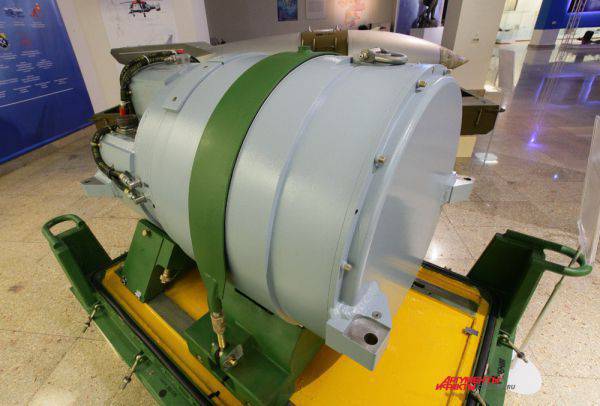 Next is the nuclear warhead of the 1967 torpedo, which is being developed by the Dukhov Institute. 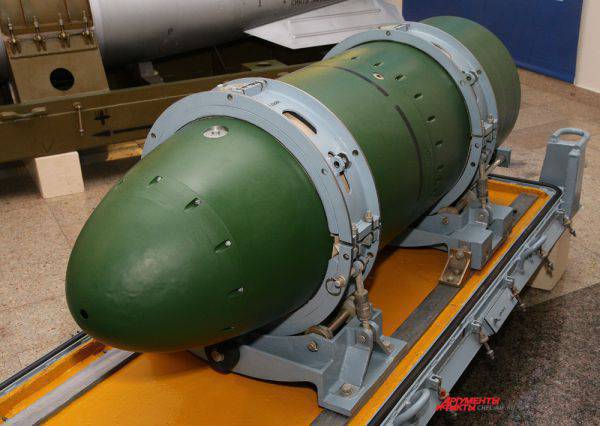 The largest exhibit at the exhibition will be the four-meter 1971 aerial bomb of the year, weighing 430 kg. 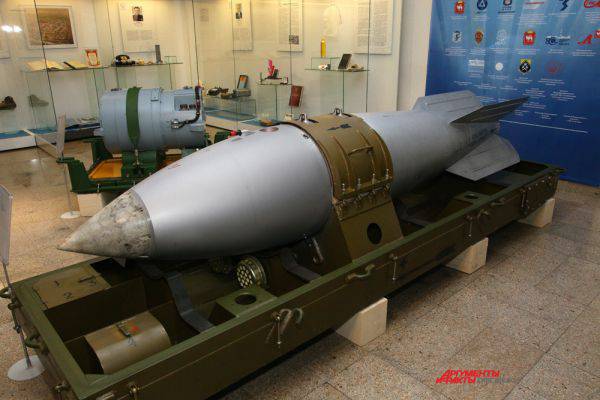 Naturally, all the shells will be without filling. November 23 brought the control panel of the reactor "Ruslan".
It is curious that the first reactor was named “Annushka”, after which “Ivany”, “Lyudmila” and “Ruslan” appeared. 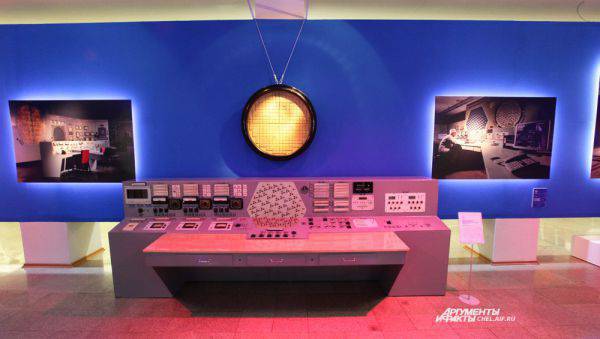 The control panel of the industrial light-water reactor "Ruslan"

The RDS index was deciphered by the people: “Russia does it itself”, and the reactor “LB” - like “Lawrence Beria”. What is interesting exhibits? It will be possible to sit at the same control panel of the Ruslan reactor. True, museum workers will fail, perhaps, the main thing is to recreate the atmosphere of responsibility ... But then it will be possible to imagine WHAT is in your hands ... 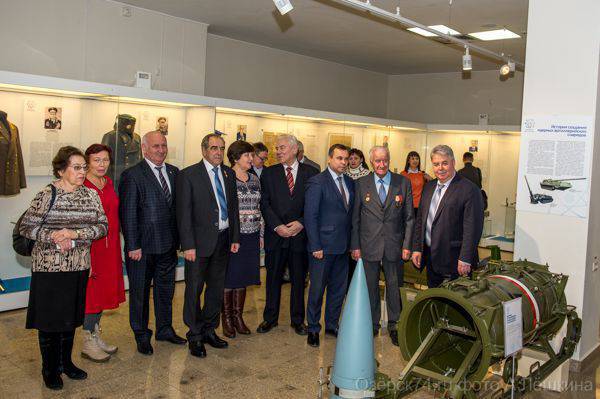 Unique people arrived at the opening of the exposition, for many years forging a strong shield of the defense of our country.

Ctrl Enter
Noticed oshЫbku Highlight text and press. Ctrl + Enter
We are
Innovation Day of the Southern Military District: Pictures from the ExhibitionThe action “Military service under the contract is your choice!” In Rostov-on-Don: future contract servicemen, exhibitions and “Russian Knights”
37 comments
Information
Dear reader, to leave comments on the publication, you must to register.