December 7 2015
33
The general offensive of the Bandera junta, which all our analysts had promised all autumn, did not take place, the junta won back, as we wrote earlier. Instead of December 7, the Vice President of the USA Joe Biden, the architect of Maidan Democracy and the customer of the summer, August, comes to Kiev. the offensive of the Armed Forces of Ukraine, which was disrupted by President Poroshenko’s instigator at the instigation of Chancellor Merkel, judging by his visit to Berlin on August 24. 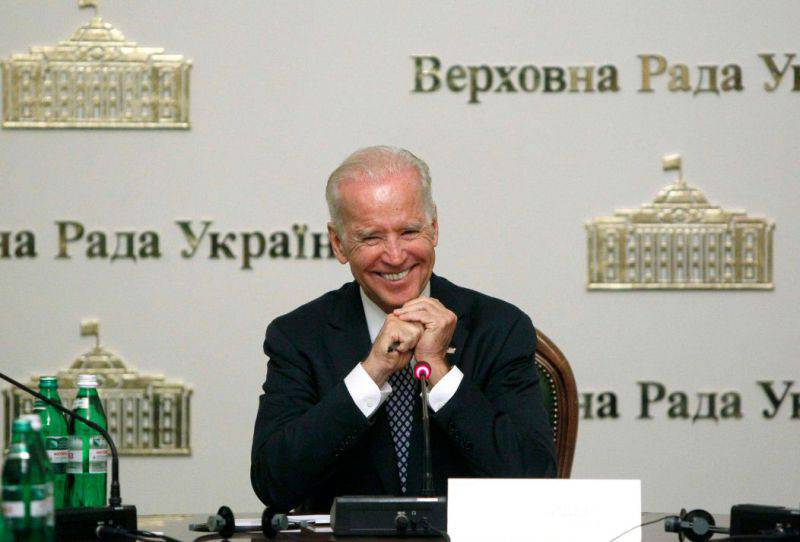 Why does the chief come usually? After the words of welcome to do the dressing for the results of the work done and the disrupted summer offensive. And to give, of course, new valuable instructions. Biden will judge all, punish everyone!

How will Poroshenko be punished? The range is great, from criticism for corruption, demanding that the last loyal servants like Prosecutor General Shokina be dismissed from the service, Poroshenko’s dismissal: Poroshenko’s message on the Washington corridors has long been known that the State Department wants to change the figure of the President’s President in Krajina. However, these two options can be combined: first, to deprive Poroshenko of the minions, and then it will be easier to dismiss.

There is an opinion that Biden will come to organize a new offensive, even a winter one, once tore off the summer one. Poroshenko can give such an order, but what will be the consequences? Then the subject of negotiations will be the discussion of the consequences and guarantees of asylum in the West, the supreme commander Krajina and his assistants.

Other Biden themes could be the final breakdown of the Minsk agreements (end on December 31), Krajina’s default on December 20 from Russia, and euro-association problems with January 1. They are concerned and part of the Kiev elites.

A half-billionaire Sergei Taruta, the ex-governor of the Donetsk region, recently made a forecast that in six months, Krajina’s economy would collapse. To avoid this, it is necessary to urgently transfer power to the technical government, that is, to dismiss the office of the politically insane Yatsenyuk. Earlier, Taruta attacked Poroshenko himself, calling him the weakest minister in the pre-season period. Moreover, the attack on Poroshenko Taruta leads on the main media horn of the junta “Ukrainian Truth”: in a row two smashing articles on the front page.

And why is he so brave? It seems that an alliance of oligarchs Taruta-Akhmetov-Firtash and K against Poroshenko is taking shape. True, Firtash did not allow the head of the Ministry of Internal Affairs Avakov, a party friend of Yatsenyuk, to Kiev. But the trend itself is eloquent, Krajina boils in winter ...

After the start of the energy blockade of the Crimea, Russia stopped coal supplies to Kiev, and the Donbass stopped its deliveries. Kiev began to buy coal in South Africa, as it did last year, but last year it did not save it, we had to turn to Russia. What will be closer to the New Year?

It is very promising that Putin does not mention the topic of Ukraine in his address to the Federal Assembly. This “Ukrainian” silence of Putin may turn into great New Year gifts for the junta. Russia clearly leaves a field for maneuver, an open sheet in relation to Bandera Ukraine. To enter these gifts into it, probably, after the official end of the Minsk agreements, if they are not pointedly torn off earlier. After Biden’s triumphant departure to historical homeland of the Indians.

After the blockade of the Crimea, quite a fascist act, the Bandera Ukraine can be put under the Turkish scenario, where Poroshenko will play the role of Erdogan. Crimea has already accused Kiev of a blackout terrorist act, and opened the relevant criminal cases, and Russia, after the breakdown of Minsk, that is, the burial of a peaceful settlement of the conflict, can support the Crimea’s claims. And it will demand compensation for damage, a formal apology, and bringing to justice those responsible for the terrorist act, as happened with Turkey. Only after that will some kind of normalization of relations be possible, and the resumption of energy supplies. Or never.

Donbass can set the condition for the resumption of coal supplies to the release of all political prisoners accused of "separatism", "wool" and "Colorado". More than 6000 people were arrested "for separatism" and held in democratic Maidan prisons.

Considering that coal reserves at Krajina TPPs are less than a month of work, the attack of the Ukrainian Armed Forces seems unlikely from a common sense point of view, but as a last adventure, just six months before the terrible end, the Ukrainian Armed Forces can be sent for the last offensive. If this is where Biden arrived. Fascist regimes never feel sorry for their people: political ambitions overwhelm the mind.

Hitler, before the fall of Berlin, drove the boys to the front for the slaughter and finally flooded the subway with civilians. Bandera in this sense is even worse. Roman Shukhevych, carrier of the Iron Cross, commander-in-chief of the UPA in the rank of SS captain, did not hesitate: “We shouldn’t be afraid that people will curse us for cruelty, even if half of the forty million Ukrainians remain - there’s nothing wrong with that.”