December 8 2015
15
In recent years, there have been a lot of so-called Cossack hand-to-hand fighting styles, which often have no historical the basics. But there are really serious directions, based on ethnographic materials and information from historical sources. Andrei Viktorovich Yarovoy spoke about one of them and the military science of the Don Cossacks: President of the Don Federation of Cossack Martial Arts Shermitsy, Doctor of Philosophy, historian, assistant professor. 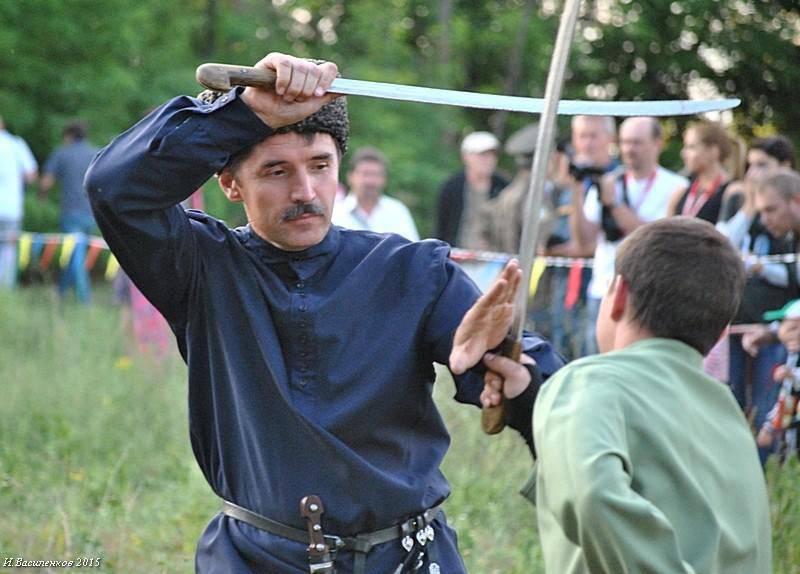 Shermitia is a complex discipline that incorporates various popular forms of wrestling and fisticuffs, possession techniques weaponshorse The direction preserves the folk tradition of the Don Cossacks.


2. Style motto (schools, directions)
"Stop and do not be afraid."

The basis of the direction was formed by ethnographic data collected by me in the territory of the Lower Don, up to the Tsimlyansk stanitsa. The informants were old men, whose maturity was in pre-Soviet times, who were taught to master lance and swords, who fought in the steppes, and on holidays fought. I began work on the direction in 1994, in YNT, yurt competitions began to be held, in 2003, in the village of Starocherkasskaya, we passed shermitsii. From this point on, twice a year we hold national Cossack games at St. George the Victorious and the Protection of the Most Holy Theotokos. The structure of the Federation of Shermisium is growing, which includes various sections, clubs and schools of Shertium from different farms and villages, cities where Cossacks live.

The purpose of the classes is to bring up a carrier of culture, ethnic culture, if he is a natural Cossack, or just a person who knows and understands that there is a military Cossack culture. Mental qualities: directness - truthfulness, ingenuity, the desire to compete, that is, an active, not discouraged life position, a tendency to think. Physical qualities - abilities and skills of possession of traditional melee weapons, the ability to fight and fight with their fists, to conduct a collective battle.

The method is based on the traditional principle - “do as I do”. Methodical techniques vary in schools shermiy. Followers began to actively develop the methodology, the number of students expanded, exercises and games became more diverse.

Usually, fencing and melee exercises alternate either within one lesson or within a week of training, when one lesson is devoted to melee affairs, and the other to fencing.

Exercises are the most common: to warm up, to work with gymnastic equipment - bars, sports horse, crossbar. Running, including falls, somersaults, warm up hands, body, jumping over obstacles and so on.

Much attention is paid to the folk exercises and games. Sazhenki measure, play in the buns, hauling on a stick, fighting in a circle, equestrian battle, chagard, aydanchiki, in the "shepherd" and so on.

Work with traditional weapons - pike, checker and dagger - includes work at different distances, at different rates, there are training battles for a given action, often we play “tag” with checkers and pikes.

In conclusion, as in the beginning, the Cossack believers read a prayer.

The technical base of the fist fight - only shock. The blows are struck with fists, forearms, in the training battle "they take on the elbow." You can hold the opponent with your hand, grab hold of your clothes or hand, you can intercept the opponent's hands, catch them in grabs, take them to the creases.
In the struggle for breaking all throws and stalls are allowed, if the hands or one hand is located on the belt. In competitions, high-amplitude throws are prohibited, since the fight takes place on a thin carpet, on the grass.

The basic authorized equipment is used in the checker, and the technical base of possession of the checker is obtained much more interestingly than that presented in the charter, as it expands at the expense of the national games and competitions related to the checker. Swinging a checker, a massive amplitude blows are not characteristic of good fighters. Pick contains translations, jingles, cheats and injections. The technique of picking is simple at first glance, but in its own way is very interesting and athletic. 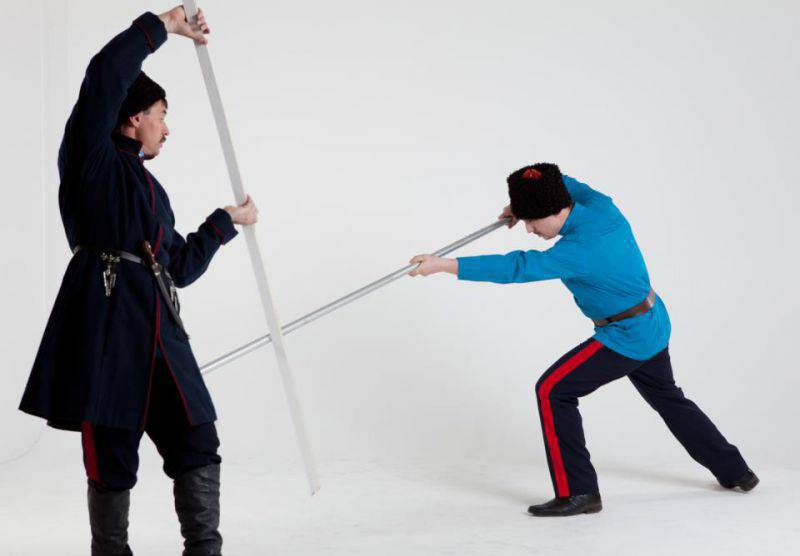 Almost at my school, it's an attack. Attack to pace, from various positions and body positions. On any action of the enemy. Although there are schemes for protection, a change of body in space is obligatory: a fighter is looking for a place and time for striking an opening limb or part of the body. Movement is often carried out on a tangent to the enemy, with the fraudulent movements of an armed hand or corps, usually two. Enemy attacks are often intercepted with the naked hand. There are special exercises to develop the feeling of the blade, then the counterattack becomes inconvenient for the enemy. Fist fight inherits tactical schemes of working with weapons.

In all areas, we have training fights and full-fledged competitions. Fist fight is carried out as a single combat, on the ground covered with grass. The task is to knock out the enemy abroad, make him fall. The blows are the most common, preserve the folk terminology - gobotoryas, pozashey, vtyk and others.

Fencing fights are held on a round platform - a battlefield, with special weapons: a pike with a soft tip and a Cossack sports checker. The task is to deliver one or three hits to any non-prohibited area. The forbidden zone is the groin and throat, since the protective equipment is a mask for the ARB, the rest is Cossack on the right. There are also duels with dull drafts, when the task is to strike the enemy flat. These are useful fights that only masters can do. They teach how to take a punch correctly, hold a sword and strike. A separate discipline is the cutting of various targets with a piece. The correct target for an experienced chopper should be soft, flexible, which requires a proper strike. This applies to single targets. The cutting of a strip of targets is carried out in pairs, who better cut through; with equal hits - time is taken into account.

Fighting for breaking is a kind of belt wrestling. It starts from capture (or outside capture, then for reception it is necessary to grab the opponent with a belt at least with one hand, the other hand can break, grab a leg, etc.), you can not completely throw the capture, but you can release one hand and hold it throw.

In general physical training has already been mentioned above. Special includes working with stones: stones are thrown to each other; work on paws fists, on the bag. In fencing, ligaments of defenses and strikes are worked out, until exhaustion; they work with weights (who will transfer someone to whom), fence them with peaks on a bench or a boom, game fights and folk games are used that bring up a game attitude to a fight.

There are collective fencing games - in the king or in checkers, when the team must hit the unarmed leader of the other team, but keep it intact. Practiced various tactical schemes for conducting such a battle. When working with weapons, tactical methods of work against two or three opponents are developed, designed to move the body in space and lightning-fast preemptive attacks.

Practicing hand-to-hand combat with the use of wrestling, fisticuffs and fencing skills is carried out against a stick, a knife. Fencing on weapons is the basis for training.

There is almost no work on the ground. Since fighters are not supposed to participate in sports battles, there is no competition on the ground.

There is a work with weapons in a limited space: limiting the area under your feet or walls. Exercises to develop a sense of the blade are made in the blind. There are exercises against working with opponents of different weight and height.

The basis of psychological preparation is the people's Orthodoxy, as well as the views of the Don Cossacks on the fight, on the behavior of a fighter in battle.

Improving the effect for the citizen in a sedentary lifestyle is undeniable. But the main effect is socializing. The Cossack learns to perceive the battle, the battle as a normal phenomenon for the flow of life, as a kind of competition with himself, related to the right, weapon, horse - they have an ethnocultural reference.

1) Directional roots are found in the traditional culture of the Don Cossacks.
2) is unique about weapons and how to work with them.

17. Application in life (a case of self-defense, when the student was able to protect himself in this direction).

Cases are different. In a fight, the system was used against a strong opponent, against two attackers. Recalling the skills of the Cossack fist fight, the defender grabbed the hand of one attacker so that he did not run away, hide behind him from the second, gave the first one and sent it with a sweeping blow to the head on the ground of the second. In another case, he was captured by the neck, so the defender had to grab the opponent's eyes and free himself from the capture with side blows. This is what is known from the cases told by the witnesses.