Return of sovereignty: the Constitutional Court has the right to recognize the decisions of the ECHR as impracticable

December 7 2015
117
Behind the ups and downs associated with Syria, Turkey, and the terrorists of the Jemilev Mejlis, an event has remained somewhat in the shadow, the importance of which in terms of strengthening Russian sovereignty is difficult to overestimate. We are talking about the adoption by deputies of the State Duma of the Russian Federation in the second and third readings of the draft law, according to which the Constitutional Court of the Russian Federation has the right to declare decisions of the European Court of Human Rights impracticable if such decisions contradict the Constitution of the Russian Federation. It would seem that the adopted bill is of a purely technical nature and is not capable of bringing about fundamental changes at the defense platform of the Constitution and the sovereignty of the Russian Federation. However, by and large, this is a real legislative revolution. In fact, Russia has finally gathered strength and made the first (but very important) step towards demonstrating that Russian legislation is of paramount importance for the state and the population, in contrast to the so-called “international” legislation. 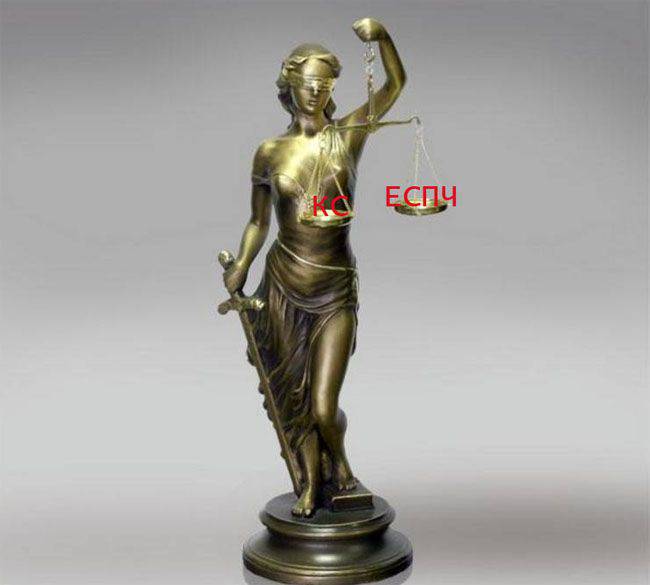 The idea of ​​the need to put the Constitutional Court of the Russian Federation above the same ECHR was not born last week. In fact, it has been in the air for years, especially considering the fact that European judicial institutions for all the time Russia fulfilled its obligations as part of them very (well, very highly) rarely decided to make any decisions in Russian favor.

From the comment of the judge of the Constitutional Court of the Russian Federation:
Russia's participation in an international treaty (an agreement on the execution of decisions of the Strasbourg Court) does not mean a rejection of state sovereignty.

Further, it is reported that if the decision of the ECHR is recognized by the judges of the Constitutional Court of the Russian Federation to be inconsistent with the Russian Constitution, such a decision by Russia will simply not be executed.

Even before the discussion of the draft law on amending the law on the Constitutional Court of the Russian Federation, the deputies discussed the issue related to the fact that the decisions of the Strasbourg court, to put it mildly, are often aimed at “diluting” Russian sovereignty. To understand how the ECHR is concerned about the “human rights situation in Russia”, it is enough to cite interesting statistics. For a number of years, Russia has been ranked first in the number of complaints filed with the ECHR, as well as in the first place in the number of satisfied claims against Russia. The largest number of lawsuits against the Russian Federation was noted in 2010 year - 14309 (this is almost 40 lawsuits per day!) On average, over the past ten years, the number of lawsuits filed against Russia is about 10,5 thousand per year. At the same time, the ECtHR accepts claims against Russia not only in civil but also in criminal cases. Arbitration decisions rendered in Russia, the European Court of Human Rights also proposes to reconsider if suddenly the Russian decision is not satisfied with someone. And if the “political” component is suddenly found out in the claimant, then for the ECHR this is a tidbit at all, which will be licked and sucked from all sides to exaggerate the process, giving it almost a global scale.

At the same time, the decisions of the ECHR were made in such a way, as if Russia had no Basic Law at all, that is, the Constitution. European judges, among whom a Russian representative was invited more for pro forma, acted according to the principle: the Constitution of the Russian Federation? No, we do not know ...

Here is just one example of the ruling of the Strasbourg Court.

In June 2000, Mr. Gusinsky was arrested on suspicion of fraud. The investigation gathered a lot of evidence that, while creating various commercial projects, Gusinsky, through fraud, transferred broadcasting functions from the state-owned Russian Video company to the private company Russian Video. As a result of this transaction, the state-owned company lost an 11 TV channel with an estimated cost of $ 10 million. After that, Gusinsky left Russia and moved to Spain, where he was first arrested by local police and then released with a refusal from Russia to request extradition.

In 2004, the ECHR, in which Mr. Gusinsky (now, by the way, the owner of News.ru), who previously represented TC NTV (under the direction of Mr. Gusinsky, the television channel, as you know, widely covered the Chechen campaign, and on the side of the militants, showing exclusively "atrocities of the feds"), rendered the following verdict:

a) the defendant in the person of the Russian state has to pay 88 thousand euros over three months in compensation for costs and expenses, which must be converted into the national currency of the respondent state at the exchange rate on the day of the decision (plus the amount of all taxes that can be deducted when currency conversion).

b) after the aforementioned three months before the final payment, interest will be charged in excess of the amount at a rate equal to the ECB's usual credit rate for the specified period, plus 3%.

That is, the ECtHR sided with Mr., against whom Russian investigative bodies collected numerous volumes of evidence on charges of fraud and misappropriation of state property. But do the proofs of the Russian investigation have any significance for the Strasbourg judges, for whom the protection of human rights is far from the first place.

Russia was forced to pay compensation to a person suspected of fraud against Russia! This is five points, of course ...

No, of course, there were cases when the ECHR took the side of what is called the working people - when ordinary citizens lost due to the fault of the bureaucracy from the bureaucracy of the shelter or were forced to make ends meet in connection with the bank frauds whose victims were. The Russian justice, frankly, far from always stands on the side of such plaintiffs, and therefore they are forced to seek the truth even in the same ECHR. But the rulings of the ECHR in favor of such plaintiffs are unlikely to somehow contradict the Russian Constitution. The thing is different. - The fact that through the ECHR they often try to push through the cases of outright fraudsters, accomplices of terrorists, adherents of all sorts of sectarian trends, trying to pretend to be “victims of the regime”. And such “victims” in Strasbourg are strangely supported.

And now the Constitutional Court will have every reason to be able, as they say, to separate the wheat from the chaff and to make its verdict regarding the ruling of the ECHR. It is assumed howl of Russian “human rights activists” feeding on foreign grants ... Well, nothing ... They will calm and calm down, all the more so it is necessary to recall that constitutional institutions have a higher status than the ECHR status in a number of European countries, including, for example, Germany and Britain. So Russia is just learning to adopt the advanced European experience ...