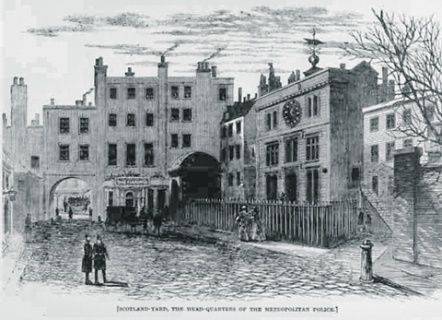 A special department of the London police was created in the 19th century to carry out tasks to search for criminals of foreign origin, as well as to protect members of the royal family and distinguished guests. The activity of this department has always been shrouded in mystery, but at the end of the XIX century a series of explosions in London lifted the veil of secrecy over it.


Between March 1883 of the year and January of 1885 of the year in London, 13 of terrorist acts were carried out, accompanied by bombing. Some of them caused considerable damage. These explosions were an attempt by the Irish extremists and their Clan-on-Gale organization to terrorize the population of England in connection with the question of granting self-government to Ireland.

15 March 1883, an explosive device did not work for the Times, but the explosion occurred in the Westminster area, causing significant damage. Fortunately, there were no casualties.

October 30 1883 two explosions sounded in the London Underground, causing 60 people to be injured.

27 February 1884, an explosion occurred in London at Victoria Station.

The next day, explosive devices equipped with dynamite and clockwork mechanisms were found at two other stations of the London Underground - Charring Cross and Paddington. As it turned out, the watch movements were made in the USA. The same conclusion was made when an explosive device was found at Ladgate Hill station.

But the 30 bomb blast of May 1884 had the most colossal effect. In 21.20, a terrible explosion shook and destroyed part of the building of Scotland Yard itself (as it turned out later, the bomb was laid in the toilet). Fortunately, at that time, the British police did not stay at work, so there were no casualties.

As always, enterprising people have done their business on this. Opposite the building of Scotland Yard was a drinking establishment called the Rising Sun, which was also damaged by a bomb explosion. The owner of the institution earned a lot of money on this explosion by organizing a viewing of the “epicenter of the explosion” for its visitors, to whom he sold drinks in one month more than in previous 12.

But the explosions did not stop there. 13 December 1884, an attempt was made to undermine the famous London Bridge, resulting in a huge hole in one of the pillars of the bridge. As the investigation showed, the explosive device could only be installed from the side of the Thames from the river vessel.

After that, the explosions stopped as suddenly as they began.

Most likely, the termination of the terrorist acts was due to the active actions of the British intelligence services, which, according to William O'Brien, editor of the then-popular Irish newspaper, “planted so many spies outside and so many traitors from the inside that absolutely impossible. "

The Irish extremist organization Clans-on-Gail had an extensive network in the United States. Scotland Yard was able to introduce into the ranks of the organization of his agent, who gave the British police comprehensive information.

At the end of the 19th century, anarchists from Italy were in the field of view of the special department of Scotland Yard. In the 1892 year, after arrests and searches, a large number of small explosive devices and disruptive literature were seized. During the investigation it turned out that the bombs were not intended for use in England, but in Russia.

Two years later, Europe was swept by an anarchist terror. French President Carnot was killed, a series of murders was committed in Italy. In London, explosions occurred in a number of buildings at the post office, after which the police arrested two Italians who were accused of organizing these explosions.

In 1895, the League of Caring for Extra-Married Children came into the attention of the Special Division. Her goals were initially very attractive - to give an opportunity for children born out of wedlock to realize themselves. But, as it turned out later, this league became a place of pilgrimage for anarchists who recruited their supporters among children (was it not from here that Boris Akunin took the plot for his novel Azazel?). The most interesting thing is that the president of the league Lillian Harman herself was the daughter of the famous anarchist Moses Harman. She arrived in London from Chicago, where she was serving a prison term for cohabiting with a man with whom she was not legally married.

The activity of the league was terminated when it began to distribute the book, which now would be qualified as a pornographic publication.

The last explosion, which is attributed to anarchists, was 26 on April 1897, at the City station of the London Underground. Several passengers were injured, with one passenger killed.