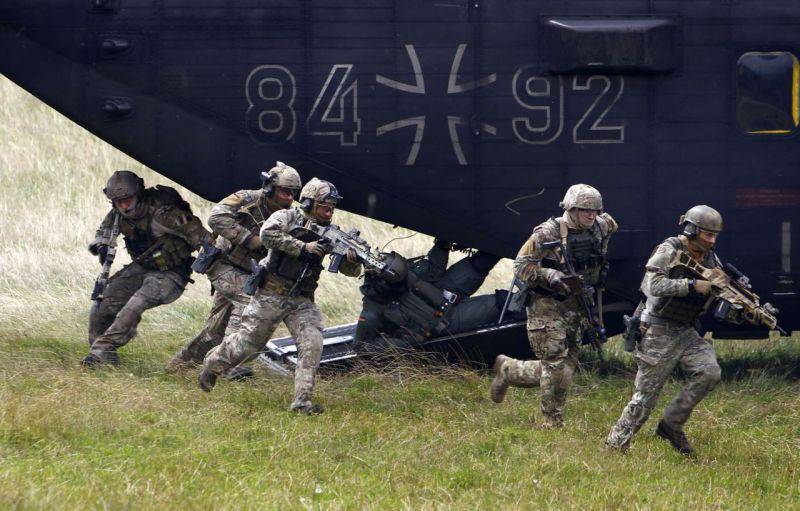 In early November of this year, President of Ukraine Petro Poroshenko submitted to the Verkhovna Rada, and then signed a law allowing foreign troops to stay on Ukrainian territory (this is about NATO forces). Earlier this law was already considered by Kiev. From April 17, 300 US troops are in the country only according to official data. From time to time on the Internet, on media sites and in the blogosphere, there are reports of the transfer of NATO special forces soldiers to Nezalezhnaya Square. The words of the head of the Pentagon that the political and military leadership of the United States is looking for "new options for action" to contain Russia, including the military, are not a joke. And Ukraine is still the most profitable bridgehead for the West and a mechanism for such deterrence. At the very beginning of the confrontation in the Donbass, in April 2014, when the flywheel of war in this region only unwound, the German edition Bild published a message about the plans of the Bundeswehr (Bundeswehr - German Federal Armed Forces) to send soldiers of its elite special forces unit Kommando Spezialkrafte (KSK) to the south-east of Ukraine. Official Berlin denied this message, but it was said that under certain conditions, the use of special forces is not excluded.

NATO command (Germany is one of the members of the alliance) assigns an important role to special forces in modern armed conflicts. This situation did not arise from scratch, but as a result of the evolution of military affairs over the past 70 – 80 stories. Despite the fact that high-tech weapons and equipment are the main striking force of armies of leading world powers, the value of light, superbly trained infantry (such as special forces) is capable of conducting multitasking sabotage and reconnaissance activities in the interests of the main forces, is recognized by all military leaders.

During the Second World War, the Third Reich had sabotage and reconnaissance groups, both in the Wehrmacht and the Waffen SS. The most famous operation of the "Nazi Special Forces" was the release of Mussolini in September 1943 of the year (Operation Oak, led by Otto Skorzeny). After the defeat of the Third Reich, the German armed forces ceased to exist and were subsequently recreated from scratch, the same fate befell special forces. Despite the fact that more than 70 years passed after the end of the Second World War, Germany is still under the occupation of US troops. But this fact does not prevent Berlin from engaging in its own military construction within the framework that its Allies allot to it. If Brussels decides to create an armed forces of the European Union, then most likely the Bundeswehr will be the backbone.

As for the KSK, the year of the formation of this military unit of special purpose is 1996. But the units that later became part of the KSK, took part in the military operations of the alliance in Yugoslavia in 1991, in Somalia in 1994, so we can say that this command began its combat path before its formal emergence. Finally, the KSK took its modern look only to 2001 year. The creation of special teams in modern Germany was initiated by the Minister of Defense of that time, Volker Rühe, and General Hartmut Bagger.

The Germans did not reinvent the wheel and created the KSK in the image of the British SAS 22 regiment (see “NVO” from 14.08.15, “Special Forces in the service of Her Majesty”). Often, KSK combat groups use their technical base and training grounds of their British counterparts to study. There is a constant exchange of experience between these two units of special purpose, as well as the RPIMA 1 regiment (French special forces, see “NVO” from 10.07.15, “Red berets are different”). KSK commandos are frequent guests in the New World, where they train at the US Special Forces training grounds (see “NVO” from 02.10.15, “Delta Force”).

I propose to consider the entire scope of tasks in peacetime and wartime. The focus is on military intelligence in its entire spectrum, which can be carried out deep in the rear of the enemy, in the front-line zone and in the war zone throughout the depth of the enemy's battle formations. Diversions in the rear, on operational lines and troop supply facilities, destruction of strategic nuclear missile systems, enemy air defense and anti-missile defense facilities. Committing acts to eliminate enemy commanders and political leaders. Targeting and adjustment for conducting air strikes on military and industrial objects of the enemy. Search and rescue of their military personnel, as well as allies captured by the enemy. Other complex combat tasks that linear units and units of the Bundeswehr cannot complete.

KSK is deployed in the south-west of Germany at the military base Graf Zeppelin near the town of Calw. The main training center of the team is located not far from the place of deployment, in the Black Forest valley, which only at the time of its creation spent about 21 million euros. KSK fighters also undergo special training at the Fullendorf Special Operations Center, mountain training in Austria, and training for action in the arctic conditions in Norway. They work out tactical methods of action: in the desert - in Israel or Texas, in the tropics - in San Diego or Belize. Training special forces of this elite part is costly for German taxpayers. The KSK is subordinate to the Special Operations Directorate (Div. Spezielle Operationen) and the Bundeswehr High Command.

The number of KSK, according to information leaked to the media, is 1100 military. As part of the management, headquarters, headquarters and rear services, burdened with all the necessary infrastructure, a company of military intelligence and four company commandos with different specializations: rangers, mountain hunters, airborne troops and a company of marines. The companies consist of four platoons. The lowest tactical unit is a combat group of four fighters. Separately, I would like to dwell on the mountain training, in which German special forces surpass their colleagues from the USA and the UK. I want to note that mountaineering in Germany is a national sport.

Despite the fact that the KSK is the most expensive part in the structure of the Bundeswehr, it has a clear lack of vehicles, we are talking about airplanes and helicopters. Combat groups use KTM400 LS-E / mil motorcycles, Yamaha KODIAC 4X4Quad ATVs, LYNX GLX 5900 FC / E Army snowmobiles to travel over land. Of the cars, preference is given to the Wolf SUV - the army version of the Mercedes-Benz 250GTD and the American all-terrain vehicle HMMWV. As a light wheeled armored car, the Mungo conveyor is used in various modifications. Where the wheeled vehicle does not pass, the Swedish crawler transporter Bv206 D is used. In addition to these samples, German special forces have the opportunity to pick up other vehicles that are more suitable for a specific combat mission. In mountain conditions, KSK fighters use pack animals as vehicles. In the state of the Bundeswehr, there is an EAZ 230 training center located in Bad Reichenhall, where they breed pack animals and train fighters to get along with them.

No wonder the KSK belongs to the light infantry, the basis of their weapons - small weapon. Of the large number of German-made long-barreled weapons, the 5,56-mm NK416 assault rifle of the 2005 model of the year, the 7,62-mm HK G36 assault rifle with a grenade launcher can be distinguished; 7,62-mm sniper rifle G22, self-loading sniper 7,62-mm rifle sample 1972 of the year HK PSG1, large-caliber 12,7-mm sniper rifle DSR 50 (target range 1400 m). All samples are equipped with high resolution optics, night optics or a thermal imager. From short-barreled samples it is worth noting: submachine gun MP7А1 caliber 4,6 mm; other submachine guns chambered for mm 9X19 - NK MP5, NK MP7, NK UMP; pistols - НК Р8, НК USP, HK Mark 23. The staff of the KSK team has an armory where they personalize small arms to increase their effectiveness.

The right to wear a burgundy beret with the emblem of the sword, pointing upwards, in a wreath of oak leaves can be obtained only by a fighter who has undergone a complex set of tests, which, however, practically does not differ from those in the army of France, Great Britain, the United States and other countries of the alliance. The age limit in the KSK is the same as that of the allies. All personal information about them is classified. The exceptional fighting qualities of KSK fighters are beyond doubt. Strange as it may seem, the exceptional humanistic spirit of the Bundestag contributes to honing these skills in combat. Yes, it is the deputies who decide, for example, to allow the KSK fighters to open fire at their own discretion or to establish a complicated procedure for using weapons in a particular operation. American special forces in Afghanistan were joking about this: "If you see a bleeding fighter who, instead of firing at the enemy, scrolls through the instructions on the use of weapons, it means he is from KSK."

Deputies of the Bundestag are nervous about the fact that German soldiers sometimes fight somewhere. As for the KSK, the fighters of this elite unit accepted “baptism of fire” back in Bosnia at the turn of the century, but it was not about the destruction of someone, in any case, there is no information about this. German special forces were engaged in the search and capture of Serbian military leaders and politicians, whom the West recognized as war criminals. In 1999, they captured Radomir Kovacs, and in 2000, Yanko Zhajnich. The KSK fighters did a good job in Kosovo. In Afghanistan, from 2002 to 2014, the Bundeswehr was in the area of ​​responsibility before the 120 KSK fighters. At the same time, the German special forces encountered problems of support and combat support. They had the right to use weapons only according to instructions. In transport, especially in the air, they were clearly lacking. The main task in addition to military intelligence and raids for them was the "capture" of Taliban warlords. The biggest success for the KSK in Afghanistan is the capture without a single shot of Maulavi Roshan, who was the spiritual and military leader of the Mujahideen in Chaha-dar district. In total, during the stay of KSK fighters in Afghanistan, 59 Taliban field commanders and other jihadist formations were captured.

BETWEEN MILK AND BATTLE

In Germany, there is a law obliging the Bundeswehr and the federal government to provide the Parliament with information on all ongoing military operations. But the disclosure of military secrets can harm both the participants in the operations and the politicians who authorize them. In the Bundestag, only a small part of the deputies have access to classified information, which provokes outrage among the majority of the deputies and, as a result, scandals, sometimes resulting in legal proceedings. As a result, the ability of the Bundeswehr to send KSK "to the fire" is limited. Therefore, the German special forces are not as rich in combat as their counterparts in France, the United States and Great Britain.