Umbrella for the troops in Chinese 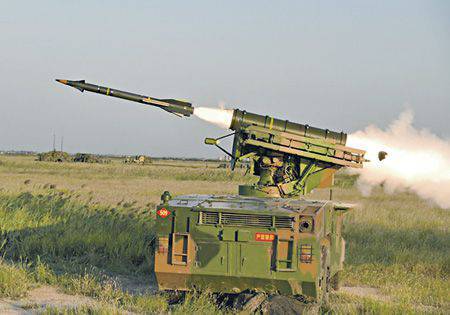 According to Chinese sources, military anti-aircraft defense (AA) is designed to conduct combat operations in the interests of covering troop groups and rear facilities from air strikes and, if possible, the space attack of the enemy. It is organized during operations of any scale and type in all types of combat operations, with the movement of troops and their location in places of deployment.


FROM ALERT TO LOST

The air defense of the troops includes forces and means of reconnaissance of the enemy’s air, warning of covered troops about its approach, formation and formation of anti-aircraft and anti-aircraft missile artillery, units and electronic warfare units. Forces and means of military air defense destroy aircraft, helicopters, cruise and operational-tactical ballistic missiles, UAVs and other means of air attack. The most modern means of military air defense can, to a limited extent, solve the missile defense tasks in the theater of operations.

Over the past ten to fifteen years, China has achieved significant success in expanding the combat capabilities of air defense, including its military component. Were developed and put into service modern highly effective means of combating the air enemy, capable of destroying maneuvering air targets flying at medium, low and ultra-low altitudes. At the present time, in addition to the barrel-based anti-aircraft artillery, recruiting more than 7376 artillery systems and MANPADS, small-scale, medium-range and long-range anti-aircraft missile systems (systems), which reach more than 296 units, are currently in service with the PLA Ground Forces Air Defense Forces.

At the end of the 90 of the last century, the troops received the Crotal anti-aircraft missile systems produced under a French license, which received the Chinese designation “Hunzi-7” (HQ-7). In service now is 200 units of air defense missile systems of this type of various modifications. At the same time, China purchased the self-propelled air defense system of the divisional link 9КХNUMX Tor-М331 from Russia and subsequently created its analogue of this fairly advanced air defense system, which received the Chinese designation Hongqi-1 (HQ-17). Anti-aircraft missile systems of the “Thor” family are specifically designed to combat modern means of air attack, including high-precision weapon: anti-radar missiles, guided planning bombs, maneuvering, manned and unmanned high-speed aerodynamic objects, etc. Armed with the defense of the ground forces of the PLA there are 24 units of such complexes.

The HQ-17 anti-aircraft missile system includes combat vehicles on a special high-tracked crawler chassis. They are equipped with eight missiles, placed in two four-charge launch transport containers, as well as reconnaissance and guidance radars, detecting and identifying an air enemy with target designation for capturing and tracking the target and transmitting coordinates to the launcher’s command and control system, and also has optical means . This radar can perform target and missile illumination with continuous radiation. The reconnaissance and guidance radar integrated into the complex makes it possible to detect aircraft at a distance of up to 27 km, flying in the altitude range from 30 to 6000 m, helicopters at a distance of up to 20 km, and unmanned aerial vehicles, including a small aircraft, at a distance up to 15 km The probability of destruction of aerodynamic targets at a distance of up to 15 km is on average 0,8. The combat capabilities of the complex make it possible to effectively cover extended and pinpoint objects located at a distance of 8 – 10 km from the combat position of the air defense system.

In 2011, the medium-range air defense missile system was adopted for arming the air defense of the Chinese Armed Forces with the designation Huntsi-16A (HQ-16A) and is essentially a land version of the HHQ-16 ship complex. The latter, in turn, is a further development of the Soviet sea-mount Shtil anti-aircraft missile system. At the armament of the Air Defense Forces of the Ground Forces of the People's Liberation Army of Uzbekistan, 24 of such a complex is currently located.

The rocket of the HQ-16A anti-aircraft missile complex is launched vertically from the transport and launch container. At the same time, this type of air defense system is capable of striking aerodynamic targets at both high and low altitudes at a distance of up to 40 km. In terms of its combat capabilities, it occupies an intermediate position between short-range HQ-7 short-range anti-aircraft missile systems and long-range HQ-9. The HQ-16A division includes a command and control station, a radar detection and three fire batteries. Each battery has a radar for illumination and guidance, and four launchers, each of which is located on an automobile chassis with the 6x6 wheel formula and is equipped with six missiles.

The HQ-16A anti-aircraft missile system is capable of striking aircraft-type targets at a range of 3,5–40 km, and cruise missile targets at a range of 3,5–12 km. The minimum target hitting altitude is 15 m, the maximum - 15 m. The probability of hitting an airplane-type target is more than 000. According to Chinese sources, the complex's radar illuminates targets periodically, which makes it difficult for the enemy to use anti-radar aviation missiles. It has high noise immunity and can direct missiles to four targets simultaneously, using inertial guidance in the initial phase of flight and a semi-active radar homing head (GOS) in the final segment of the trajectory in conditions of active use of electronic warfare by the enemy. Thanks to this, the area of ​​destruction of aerodynamic targets has significantly increased.

The most modern and most effective air defense systems of the PLA Ground Forces are front-line self-propelled self-propelled anti-aircraft missile systems C-300В (9К81) acquired from Russia. These complexes, as well as their unlicensed copies, received the Chinese designation "Hunzi-18" (HQ-18). The combat capabilities of this system make it possible to effectively solve tasks not only to cover groups of troops (forces), as well as important military and rear facilities, but also centers of state and military control, administrative and industrial facilities at the national level, complementing and interacting with the HQ-15 system ( C-300 PMU1), part of the PLA Air Force Air Defense System, which is essentially the country's air defense / missile defense system. These systems were purchased in Russia. Subsequently, Chinese unlicensed counterparts were created, which, according to some sources, are inferior to the original in many respects. This, in particular, is evidenced by the fact that the air defense / missile defense system of the Chinese capital is still equipped with Russian-made systems.

The composition of the combat means of the anti-aircraft missile system HQ-15 includes:

- radar software review capable of detecting high-speed aerodynamic targets in the conditions of electronic countermeasures at a distance of up to 175 km;

- Multichannel guidance radars providing guidance for 12 missiles at six targets with an aircraft detection range of up to 150 km, ballistic missiles - up to 60 km;

FOR THE FIGHT AGAINST HYPERSONIC THREAT

Chinese experts have been doing research for a long time to develop tools to combat hypersonic rocket systems and have made significant progress in this direction.

An important achievement of the Chinese developers was the introduction of the special passive direction finding mode of the active jammer and homing director to the homing head of the latest ZRS modifications. The introduction of such a mode significantly increases the combat capabilities of the air defense system, allowing you to receive additional target designation data in the case of active interference from the manned aircraft and the enemy's UAV, since the interference itself becomes a source of additional information for more accurate missile guidance.