This army can not throw a fez 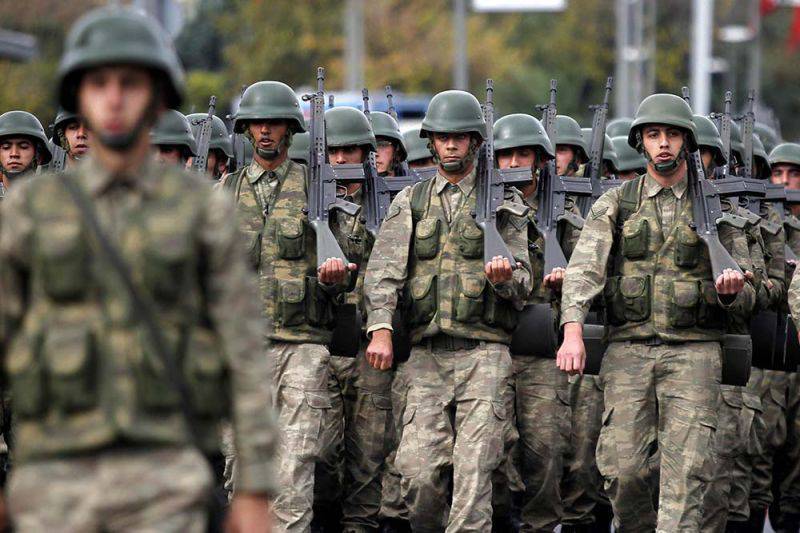 RUSSIA BECAME ON THE BOUNDARY OF A MILITARY CONFLICT, SECOND IN NUMBER, BY THE ARMY OF NATO

On November 24, the Turkish Air Force attacked the Su-24M front-line bomber — in fact, the first armed clash took place between NATO forces and the Russian army. The bellicose rhetoric of politicians makes one think that Russia and Turkey can be drawn into an armed conflict. In this regard, the “Top Secret” correspondent understood that the Turkish army is not a new, but very likely opponent of the Russian Armed Forces.

The Turkish army is among the ten largest in the world, is the second largest member of NATO, most of them are only the USA. The combat structure of the Turkish army is about 600 thousand military personnel, another 400 thousand are in reserve. And this is one of the few European armies, where the call remained. Here, people are called up for military service from 20 years, having to pull a strap from 6 to 15 months, depending on the level of education of the recruit. In wartime, men between the ages of 16 and 60 years and women from 20 to 46 who can wear weapon. For mobilization in wartime, a reserve of up to 900 thousand people trained in military science can be used.

IN THE FIRE DO NOT BURN, BUT IN THE WATER THIN

Viktor Murakhovsky, a member of the Expert Council of the Board of the Military-Industrial Commission under the Government of Russia, said “Top Secret” that, despite the large number, this is not the most formidable army in Europe: “We must understand that conscripts significantly reduce combat readiness. Of course, there is a core in the Turkish army - officers and contract servicemen, who are quite well prepared.

Most professionals serve in aviation, special units, marine corps, they are equipped with more or less modern models of weapons and military equipment. As for the rest of the army, for example, ground forces, there, with the exception of some armored units that are equipped tanks Leopard 2A4, the rest are quite outdated weapons and high skills, to put it mildly, do not differ.

Nevertheless, we should not forget that the control system of the Turkish army is integrated into the system of the United Armed Forces of NATO in Europe, in particular, it is included in the structure of the Southern Command. The degree of integration is quite high, especially management systems, communications and staffs. Suffice it to say that the headquarters of the NATO Air Force in Southern Europe, which is located in Spain, received almost real-time data on the air situation in the region of Turkey and the border with Syria. This indicates a high technical equipment of the Turks. ”

Lieutenant-General Yevgeny Buzhinsky, in 2000 – 2009, Deputy Head of the Main Directorate of International Military Cooperation of the Ministry of Defense of the Russian Federation, and in 1984 – 1986 - Assistant Military Attache in the Republic of Turkey, told “Top Secret” that today it is difficult to assess the combat readiness of the Turkish army, but its preparation is much worse than that of the Russian:

“The Turks have an excessively large army, conscripts mainly from the villages. At the same time, it should be understood: everything that to the east of Ankara is far from Europe, there is practically no education. So it turns out that the discipline in the Turkish army is at a high level, but at the same time, the soldiers do not master modern military equipment. Of course, it is possible to truly evaluate the combat readiness of the army during real combat operations, but even here the example is negative.

The last time the Turks carried out a major military operation — the landing on Cyprus in the 1974 year — they demonstrated, to put it mildly, not a very high level of training. Having landed at six o'clock in the morning in August, on a completely flat beach with calm, they managed to sink their destroyer - several dozen marines sank. They threw airborne troops, while the soldiers massively broke their legs. It is necessary to understand that they have not increased in the last years of combat experience, although some units lead a sort of military action — they are fighting with partisan detachments of Kurds. ”

Nevertheless, one should not underestimate the Turkish army, if only because, according to the Stockholm Institute for Peace Studies, the military budget of this industry from 2013 to 2015 a year exceeded the figure of 20 billion dollars. This money is used primarily for the rearmament of Turkey, and, according to experts, the army of this country is rearming at a fairly high rate. Updating equipment is mainly due to imports. The main countries - suppliers of weapons - are the United States and Israel, in addition, Turkey is actively cooperating in the military field with leading NATO countries, and more recently with China, South Korea and Indonesia.

For example, today the international efforts of the Turkish Air Force have formed a powerful aviation fleet: more than 400 combat aircraft, among them 200 F 16 fighters, which are assembled in Turkey under license, and about 40 multi-purpose F 5 fighters. In addition, a lot is said about the contract for the purchase of hundreds of fifth-generation American Fighter F 35A. According to data published by the WikiLeaks Internet resource, tactical nuclear weapons are stored on the territory of the Incirlik base - the 61 aerial bombs, which have been upgraded to F 35A. Officially, this information has never been confirmed, but nonetheless.

The basis of the strike power of army aviation is 39 of obsolete American military helicopters Bell AH 1 Cobra, and it is also planned that in the near future more than 60 modern Turkish T 129, based on the Italian 129 helicopter, will arrive. In addition, at the disposal of the military to 400 transport and multipurpose helicopters and to 100 light aircraft.

The Turkish military makes a big bet on ground forces, here, as in the Russian army, tanks are considered the main striking force. The tank fleet includes about 4 thousands of tanks, including some modern German Leopard 300А2 around 4, two thousand thousand obsolete German and American tanks and almost one and a half thousand very old American M48А5, released in 1950-x, were stored. Also at the disposal of the Turkish army more than 4500 armored vehicles for various purposes.

From artillery: about a thousand self-propelled artillery installations, almost two thousand towed guns and more than 10 thousand mortars. Almost all of the artillery is American, but for the most part outdated. Considerable attention is paid to rocket artillery, in this segment there are about three hundred MLRS American, Chinese and its own production.

Recently, Turkey has received operational tactical missiles. We are talking about American ATACMS and our own tactical missiles J 600T, which were copied from the Chinese 611. There are a lot of anti-tank weapons, for example, the 400 order of American heavy anti-tank missile systems BGM 71 TOW6, which, by the way, a Russian helicopter was shot in Syria.

By the way, the Turks have Russian-made equipment, for example, armed with the Turkish 323 gendarmerie, the Russian BNT 60PB and 535 BTR 80. These were Kornet-E anti-tank missile systems, 8 / 17 Mi helicopters, armored personnel carriers, and even Ankara’s interests in the Antey 2500 long-range air defense system.

Ankara’s priority is to develop its own defense, Turkey has already created a fairly powerful military-industrial complex. By 2023, the Turks intend to completely abandon the import of military products. Special pride for them is their own production of armored vehicles, in particular the promising Turkish tank Altay. All the components and the car itself Turks will assemble themselves. Currently undergoing tests of the prototype, mass production is scheduled for 2016 year.

Strange as it may sound, in Turkey the army is a very important political and reformist force opposing the Islamization of the country. Moreover, until 2011, the General Staff had the authority to participate in politics on an equal footing with the government. Lieutenant-General Yevgeny Buzhinsky believes that it is the current Turkish Prime Minister Recep Erdogan, adjusting to the requirements of the European Union, practically removed the military from making political decisions: “Before Erdogan came to power, although officially the head of state was the prime minister and then the president, but in fact the number one figure was the chief of the General Staff.

The military referred to the Turkish Constitution, in which the first President of the Republic of Turkey, the founder of the modern Turkish state, Mustafa Atatürk, wrote that the armed forces are the guarantor of the secular nature of the Turkish state. But it had its drawbacks, because of such a dissonance in power, military coups constantly occurred. However, Erdogan arranged a purge, and the role of the military was significantly reduced. Not everyone is delighted, especially given the creeping Islamization of Turkey. But while the military is not even trying to regain its former powers ".

Ctrl Enter
Noticed oshЫbku Highlight text and press. Ctrl + Enter
We are
The new look of the Turkish army at the beginning of the XXI centuryTurkey vs Syria: the balance of power
73 comments
Information
Dear reader, to leave comments on the publication, you must to register.