December 14 2015
17
The lack of necessary material and excess enthusiasm often lead to very interesting results. So, during the Russo-Japanese War, infantry, in need of automatic weapons, but not having a sufficient number of machine guns, was forced to resort to non-standard ideas and solutions. Special devices were created from improvised materials in military workshops that made it possible to increase firepower without using completely new weapons. By mid-1904, the Port Arthur garrison began using similar systems, called the "Shmetillo machine gun."


The troops defending the city were unable to obtain the required weapons. For this reason, the captain of the 26 Infantry Regiment Ignatius Bronislavovich Shmetillo developed his own version of a special machine with a set of equipment that made it possible to use existing rifles and fire at a fairly high rate. Naturally, this was a compromise solution and such a “machine gun” could not compete with full-fledged automatic weapons, but in the existing situation even such systems were of great interest and provided a noticeable superiority in firepower over the enemy. 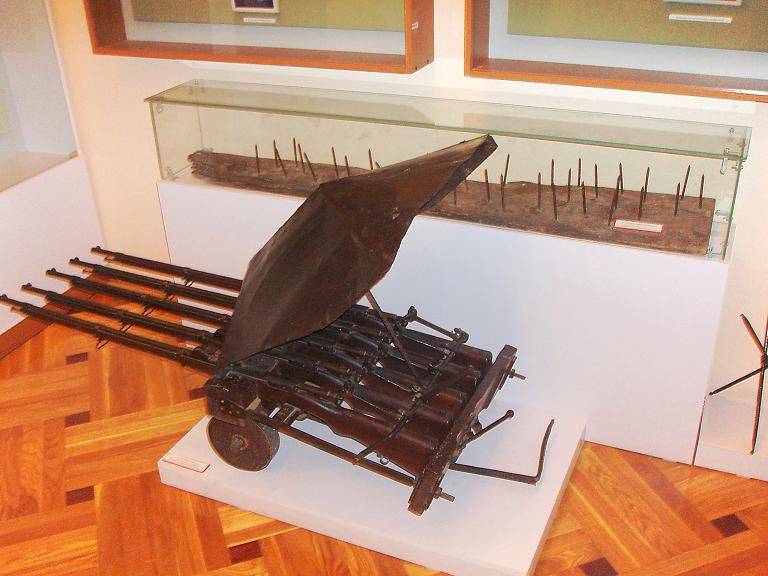 General view of the "Shmetillo machine gun" in the Museum of the Pacific fleet. Photo by Ru-guns.livejournal.com / Port-arthur.ucoz.ru

Captain Schmetillo’s project is not only interesting history its appearance and purpose, but also a number of technical features. The design of an improvised machine gun was made from the simplest raw materials: boards of the desired size, metal rods, etc. Thus, the "Shmetillo machine guns" could be produced by any army workshops in a sufficiently large number, since their production was simple and did not require scarce materials.

The basis of the design of the "machine gun" was a frame made of wood and metal, equipped with small diameter wheels. With the help of the wheels and the rear metal stop, the “machine gun” could be moved from place to place, as well as adjust the horizontal and vertical guidance during the battle. The main elements of the mast were the front board with several slots for mounting the rifle boxes and the rear, which served as a stop for the butts. Both boards were connected by side metal rods.

In the nest of the front board should install several rifles of a suitable model. According to reports, the gun carriage design proposed by the officer made it possible to make a “machine gun” based on 5-8 rifles. During the mass production of Shmetillo machine guns, Chinese Hanyan 88 rifles were mainly used, representing a version of the German product Mannlicher M1888 chambered for 8x52 mm R. This weapon had a number of characteristic features that made it possible to use it in improvised machine guns. Firstly, a sufficient number of Chinese rifles remained in Port Arthur, which made it possible to launch systems based on them. Secondly, the Mannlicher M1888 rifles had a sliding bolt that should not be rotated around its axis when loaded. Turn the bolt when locking the barrel was made by a rifle independently.

It should be noted that there is evidence of the existence of "Shmetillo machine guns" based on other weapons. Thus, a number of sources mention the assembly of such weapons based on captured Japanese rifles “Arisaka”, etc. Nevertheless, the possibility of using these weapons, as well as domestic “trehlinek”, raises certain doubts. The development of captain Shmetillo implied the use of rifles with sliding bolts, which do not need to be turned manually. In the case of the Arisaka rifle and the three-lane, the bolt would have to be turned 90 ° around its axis, which would have required a significant complication of the design of the “machine gun”.

When using the Hanyan 88 rifles on the side details of the frame of the mast, a wide U-shaped bracket with a vertical handle in the middle part was hinged. With this handle, the shooter could swing the bracket back and forth, thereby triggering the mechanisms of the rifles. For the simultaneous reloading of all the rifles of the “machine gun” on the bracket a few hinges were attached. At the rear end there was a round loop, at the front - a curved plate with a slit for the bolt handle.

Through the trigger guard rifles "machine gun" passed a special bar with mechanisms for pressing the trigger hooks. Judging by the available materials, the descent control was carried out using a system of flexible rods connecting the mechanisms to the lever on the back of the carriage. According to other data, fire control was carried out using the trigger of a central rifle, and on the rest of the weapon the force was transferred using a transverse rigid part. 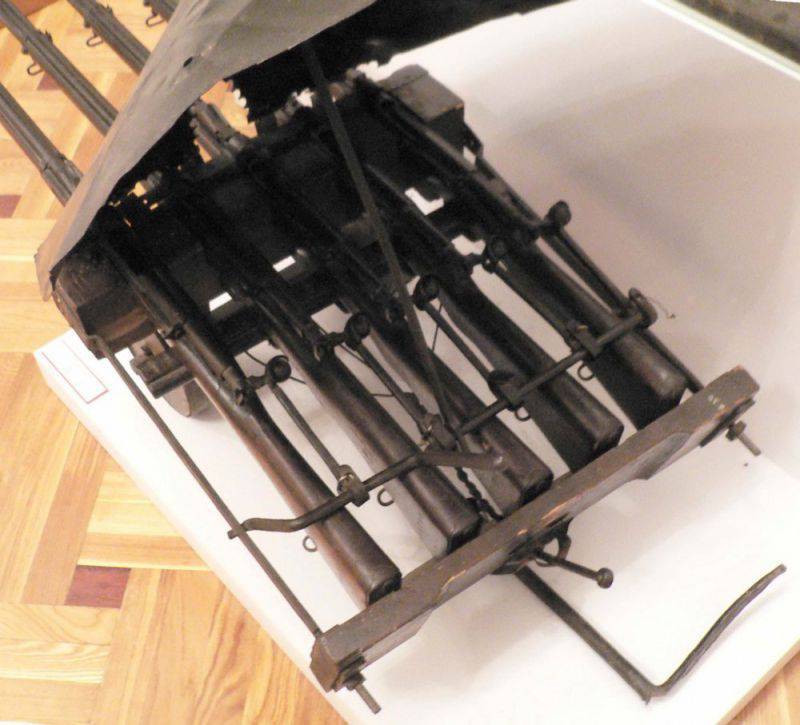 The breech of the "machine gun" and control mechanisms. Photo Reibert.info

All known models of the “Shmetillo machine gun” were equipped with a bullet-shaped bulletproof shield. With its front edge, it was movably fixed on the front board of the mast, and in its center there was a stand for keeping it in the raised position. To transport the shield could be laid on the carriage, and before the battle it had to be lifted. In the center of the front of the shield there was a hole for aiming. Apparently, it was proposed to direct the "machine gun" at the central rifle, while the rest should have been fired in the same direction. Low accuracy associated with the quality of the manufacture of the machine, offset by the number of bullets in the salvo.

The combat use of the Shmetillo machine guns was supposed to look very interesting and unusual, both for contemporaries and from the current point of view. Arriving at the position, the calculation was to install a weapon, sending it in the direction of the enemy, and also raise the shield. After that, it was necessary to pull the lever of the U-shaped bracket, thereby simultaneously opening the gates of all existing rifles. Next, it was necessary to charge the weapon with the help of clips or packs (depending on the type of weapon used), after which it was ready for combat work.

By moving the staple lever forward, the ammunition was sent and all the barrels were locked. The shot was performed using a separate lever connected to the trigger with a set of flexible rods. For the next shot, you had to pull the lever back on the bracket, and then move it forward, extracting the spent cartridges and sending new cartridges. After emptying the stores, it was necessary to manually load all the rifles and continue the fire, alternately interacting with two levers. 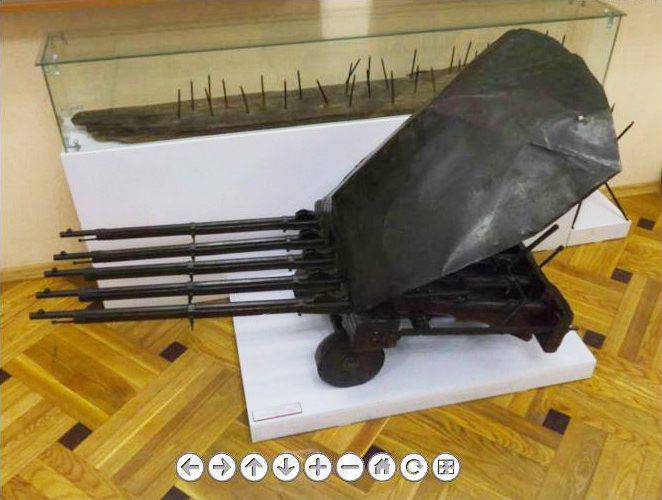 General view of the weapon. A frame from the panorama of the hall №1 of the Museum of the Pacific Fleet: http://www.museumtof.ru/index.php/expo/zal1

The Mannlicher M1888 rifles, like their Chinese copies of the “Hanyang 88”, could make no more than 8-10 shots per minute. Thus, the technical rate of fire "machine gun Shmetillo" could be several times higher. For example, a “machine gun” based on five rifles allowed in theory to make up to 40-50 shots per minute, and the rate of fire of the eight-barreled system could go as far as 70-80. However, when calculating the rate of fire of an improvised machine gun, the complexity and duration of the successive loading of several rifles should be taken into account. Because of the need to load the clips or packs after each series of shots (the Hanyan 88 rifle had a magazine for 5 cartridges), the actual rate of fire could be several times lower than the calculated one.

There is information according to which IB Shmetillo made the first “machine gun” of his own design in the spring or summer of 1904, during the defense of Port Arthur. It can be assumed that the appearance on the front of such weapons had some impact on the course of the fighting. The garrison of the besieged city did not have a sufficient number of full-fledged machine guns, and three-line rifles could not fully provide the required firepower. In this case, handicraft designs based on the former Chinese rifles allowed to partially solve some of the existing problems.

The exact results of the use of the Shmetillo machine guns are unknown. Apparently, due to the possibility of simultaneous firing of several rifles in one direction, these systems were a relatively effective means of fighting the enemy. A positive feature of such weapons could be considered the main characteristics at the level of basic rifles. Nevertheless, it is hardly worth arguing that these systems could not compete with full-fledged machine guns. 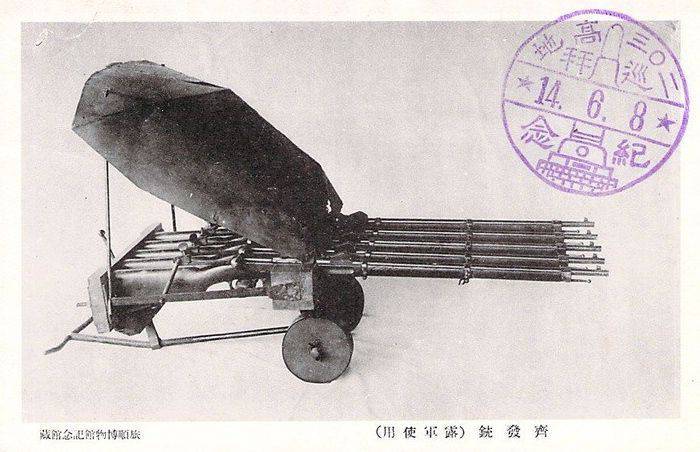 Japanese postcard with a photo of a trophy "Shmetillo machine gun", released no later than the middle of 1908. Photo Fortoved.ru

It is known that in the workshops of Port Arthur a full-fledged production of improvised machine guns was established on the basis of the available rifles. They received a certain distribution and were used until the end of the fighting for the city. A certain number of "machine guns", apparently, became the trophy of the advancing Japanese. In the future, this sample was stored in the Japanese Museum of Port Arthur. As far as we know, only one “Shmetillo machine gun” survived to this day. This item is stored in the Military History Museum of the Pacific Fleet (Vladivostok), along with other artifacts from the Russo-Japanese War.

An interesting fact is that the development of captain I.B. Shmetillo is known, first of all, thanks to fiction. This officer was one of the heroes of the historical novel Port Arthur, written by Alexander Nikolaevich Stepanov in the second half of the thirties on the basis of archival documents. In the novel there is an episode devoted to the development of an improvised machine gun, and later on the heroes repeatedly use this weapon. Thus, the original “Shmetillo machine gun” and its creator were able to remain in history not only as heroes of the Russian-Japanese war, but also as characters in a famous literary work.