December 7 2015
13
Last week, the list of participants in the fight against terrorism in Syria once again replenished. After lengthy discussions, Great Britain decided to join the Syrian operation. Previously fighting aviation of this state attacked terrorist targets only in Iraq, and now a decision has been made to expand the "zone of responsibility" in Syria. Just a couple of hours after the adoption of the relevant decision, British planes set off to destroy designated targets in the occupied Syrian territories.


British parliamentarians will remember 2 for December 2015 for a long time. On this day, they spent several hours discussing the need for Britain to join the fight against the terrorist organization Islamic State (banned in Russia) in Syria. For several months, British aviation has been attacking targets in the occupied areas of Iraq, but has not yet received permission to strike at Syrian territory. After ten hours of active discussions, parliamentarians voted and decided to send aircraft to targets in Syria. For this decision 397 votes were cast, against - 223.

The meeting of the parliament dragged on until nightfall, but this did not prevent the British military to soon begin to implement new plans. A few hours after the parliamentary vote, four Tornado strike aircraft based at the Akrotiri airfield (Cyprus) joined the battle. On the aircraft were suspended on three guided bombs Paveway IV with laser homing heads. In addition, the Reaper unmanned aerial vehicles and the Voyager tanker aircraft participated in this operation. 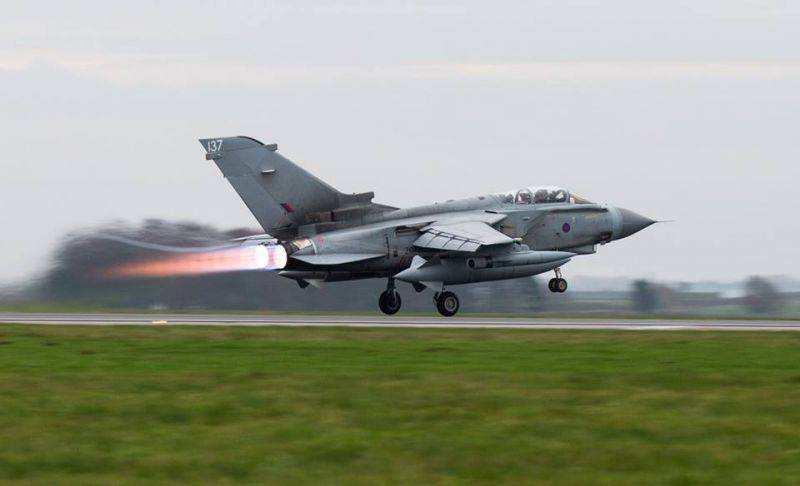 According to the publication The Aviationist, the aircraft crossed the eastern part of the Mediterranean Sea and then flew over the territories of Israel, Jordan and Iraq, until a certain point without entering the airspace of Syria. To increase the combat radius in the same place was carried out refueling in the air. The purpose of the combat departure was the attack of oil facilities in the eastern regions of Syria. Having reached the specified area, the British "Tornado" dropped the payload, hit the selected targets and lay on the opposite course.

A little more than three hours after takeoff, all attack aircraft returned to the Cyprus air base. The Ministry of Defense of the United Kingdom confirmed the successful destruction of these targets located in the territories seized by terrorists.

Shortly after the first strike was launched on targets in Syrian territory, information about the strengthening of the British air force in the region was announced. Until recently, only eight Tornado attack aircraft were based at Akrotiri airbase, half of which took part in the first strike. Now this grouping is planned to be strengthened. In the very near future, two more Tornado attack aircraft and six Eurofighter Typhoon multi-role fighters will fly to Cyprus. Probably, this technique will also be used to attack the objects of terrorists. 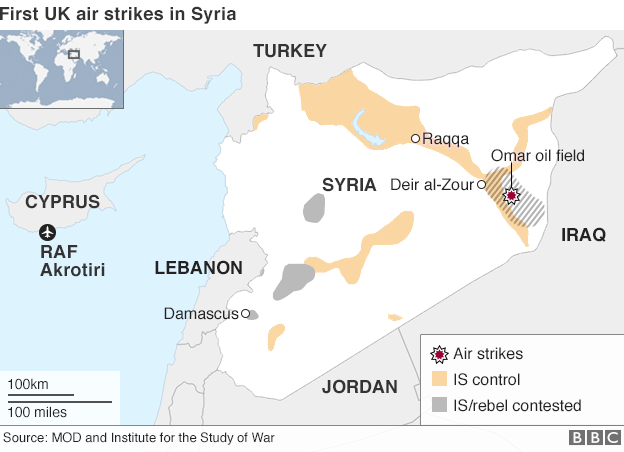 Scheme of the first strike on targets in Syria

The latest actions of official London are of great interest. Until recently, British military aircraft struck only against targets in Iraq and, apparently, should not have joined the fight against terrorists in Syria. Not so long ago, in early November, there were reports from Great Britain that the country's leadership did not want to expand the area of ​​responsibility of the Royal Air Force, so as not to provoke a negative reaction from some political forces. However, a month after such reports, it was decided to start strikes, although this required a long meeting.

Available information on the composition of the British aviation group in Cyprus allows us to build some assumptions about its potential. Taking into account the planned gain, ten Tornado planes and six Typhoons will be located at the base of Akrotiri. This, apparently, will allow the use of various weapons and attack various ground targets, both stationary and mobile. However, the actual effectiveness and “performance” of strikes can be adversely affected by the size of the grouping, which simply will not allow to carry out massive attacks on large areas captured by terrorists.

The Panavia Tornado strike aircraft has a built-in 27-mm gun and is equipped with a set of mounts for hanging arms under the fuselage and under the wing. The range of weapons of this aircraft includes unmanaged and guided munitions of various types. Missile armament can include air-to-air ammunition such as AIM-9 Sidewinder or AIM-132 ASRAAM, as well as several types of air-to-surface missiles. For the destruction of ground targets, AGM-65 Maverick, Brimstone, ALARM and Storm Shadow guided missiles are offered. 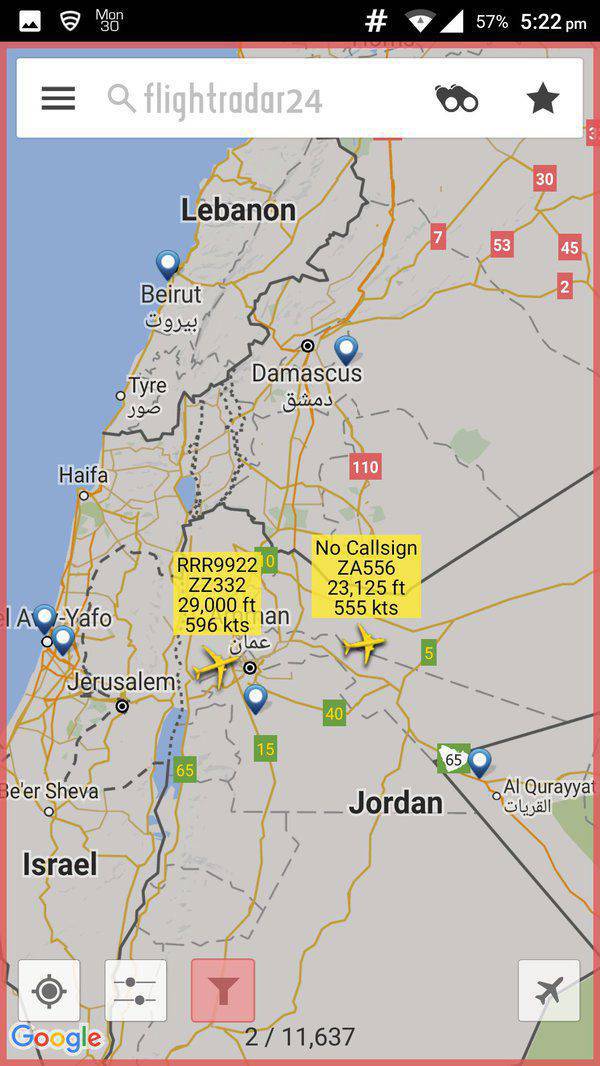 The route of some aircraft that participated in the first combat mission. Figure Twitter.com/CivMilAir

Tornadoes can also carry bombs of various types of caliber up to 2000 pounds. First of all, it is controlled high-explosive ammunition of the Paveway family. It is also possible to carry and use cluster bombs of several types, unguided bombs and, with appropriate modifications, tactical thermonuclear B61.

Through the use of various weapons, the Tornado strike aircraft is capable of solving various combat missions and destroying targets of various types in a wide range of ranges. So, with the help of Brimstone I missiles, an attack of armored vehicles is possible at ranges up to 20 km. The Storm Shadow cruise missile, in turn, allows you to deliver warheads weighing 450 kg to a range of 560 km.

It is proposed to expand the capabilities of the aircraft due to the suspension of special containers with additional equipment. In the form of separate modules, reconnaissance systems, laser target illumination systems, electronic warfare systems, etc. are performed. All these measures are designed to improve the performance of the aircraft without the need to upgrade its airborne equipment.

It is proposed to transfer six Typhoon multi-role fighters to the Cyprus air base, which should help Tornado aircraft in the fight against terrorism in Syria. These aircraft are fighters and are primarily intended to conduct air battles, to achieve superiority in the air and other combat air targets. Nevertheless, the project of the Eurofighter consortium implied the use of a promising aircraft for the destruction of ground targets. 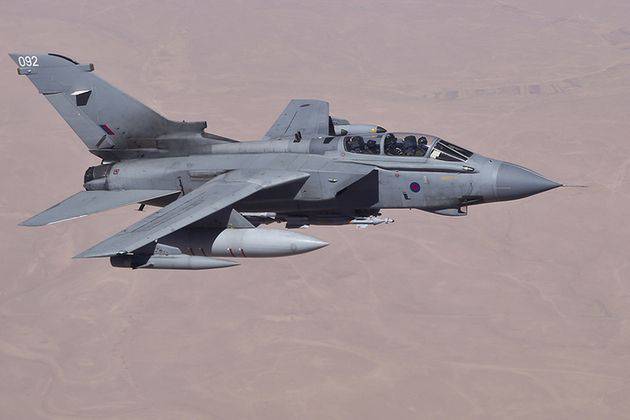 Like most modern tactical aircraft, the Typhoon carries the entire payload on the external sling. To do this, under the wing and fuselage are 13 pylons with mounts for weapons. In total, a fighter can carry up to 7,5 tons of missiles and bombs of various types. For obvious reasons, its main armament is several types of air-to-air guided missiles, including AIM-9, AIM-120 AMRAAM, etc. At the same time, however, there is the possibility of carrying guided and conventional air-to-surface weapons.

British Typhoon fighters are capable of carrying and using guided missiles AGM-65, AGM-88 HARM, Brimstone, Storm Shadow, etc. The main bombing of these aircraft are guided munitions of the Paveway family. In the foreseeable future, it is planned to supplement the nomenclature of armaments with several new systems, including SDB, JDAM and HOPE / HOSBO guided bombs. There is also the possibility of using unguided ammunition and suspension containers with special equipment.

Flight characteristics, primarily combat radius and the ability to refuel in flight, allow Tornado and Typhoon airplanes based in Cyprus to attack targets throughout Syria and northern Iraq. The first combat mission, which took place on the night of December 3, can be considered a good confirmation of this possibility. A fairly wide range of usable bombs and missiles, in turn, further increases the combat radius, and also allows the use of the most appropriate ammunition in this situation. 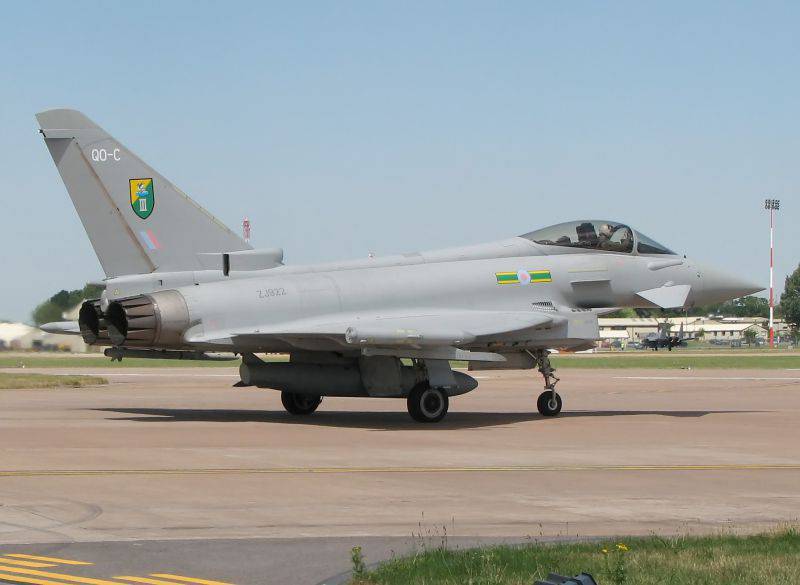 Nevertheless, it is already possible to assume that the Royal Air Force of Great Britain will lag behind other participants in the fight against terrorism in quantitative and qualitative indicators of their combat work. The fact is that the British group, which will work in Syria, is one of the few in the region - only 16 aircraft. For comparison, since mid-November, the Russian grouping at Hmeymim airbase has 69 airplanes for various purposes, and the French aircraft carrier Charles de Gaulle carries 26 fighter and attack aircraft. Thus, the strength of the aviation group in Cyprus does not yet allow the UK to become a leader in the number and quality of air strikes.

At the end of September, the Air and Space Forces of Russia joined the fight against terrorism in Syria. In mid-November, France expressed its intention to intensify strikes against targets of terrorists in the captured areas of Syria. Now the UK has joined similar combat work. At the same time, Germany decides when and with what forces it should join other countries. Thus, the activities of the "Islamic State" and other terrorist organizations that are currently trying to keep the captured areas of Iraq and Syria are seriously hampered. Aviation of several countries destroys various objects of terrorists, including warehouses, training camps, headquarters, etc. In addition, attacks on objects of the oil industry and caravans with illegal oil had become an ordinary thing.

Despite the small number of aircraft based on Akrotiri, in the current situation, the help of British aviation is clearly not superfluous. Even 16 airplanes of the Royal Air Force are quite capable of helping other countries, including Russia, as soon as possible to deal with the problem and destroy terrorist organizations that are dangerous for the entire region and other countries. How successful the parallel combat work of the air forces of several countries will be - we will find out in the very near future.