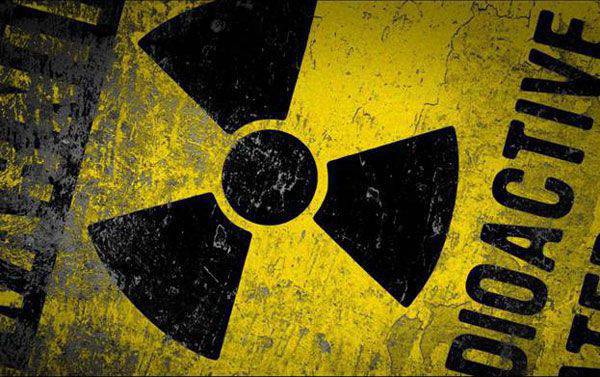 Recently, the Ukrainian leadership has been making ever more desperate attempts to achieve "energy independence." One of the main areas at the moment has been an increase in the capacity of NPP units ( http://zn.ua/ECONOMICS/ukraina-podderzhala-predlozhennoe-amerikanskoy-westinghouse-uvelichenie-moschnosti-blokov-aes-193291_.html ). As a result, the number of emergencies at Ukrainian nuclear power plants broke all records, and the world community saw the Hippocratic Face of the Ukrainian nuclear power industry with their own eyes. We will focus on one of the most important nuclear power plants, which, according to experts, plays a major role in achieving the energy independence of Ukraine - the Rivne (Riven) NPP. According to the Minister of Energy and Coal Industry of Ukraine Volodymyr Demchishin, it is with the commissioning of the third unit of the Riven nuclear power plant that the import of electricity from Russia is discontinued.

Officially, this year, the 3-th power unit of the RNPP was closed for repairs in March, May and November, however, the announced planned repair work from 23 in May for a period of 66 days turned into planned work on the extension of the service life of the power unit. http://gordonua.com/news/pr/Rovenskaya-AES-otklyuchila-tretiy-energoblok-dlya-remonta-82337.html, http://www.energoatom.kiev.ua/ru/press/nngc/43935-na_raes_prodoljayutsya_raboty_po_prodleniyu_resursa_energobloka_/

In mid-May 2015, the International Atomic Energy Agency (IAEA) conducted scheduled and unscheduled inspections at the Rovno nuclear power plant. ( http://rian.com.ua/economy/20150521/367872973.html ) According to the press service of the Ministry of Energy and Coal Industry of Ukraine, both checks were successfully passed. However, right after them the 3 power unit was closed for repairs for more than two months. An IAEA officer reports on the progress of the inspection at the RNPP. 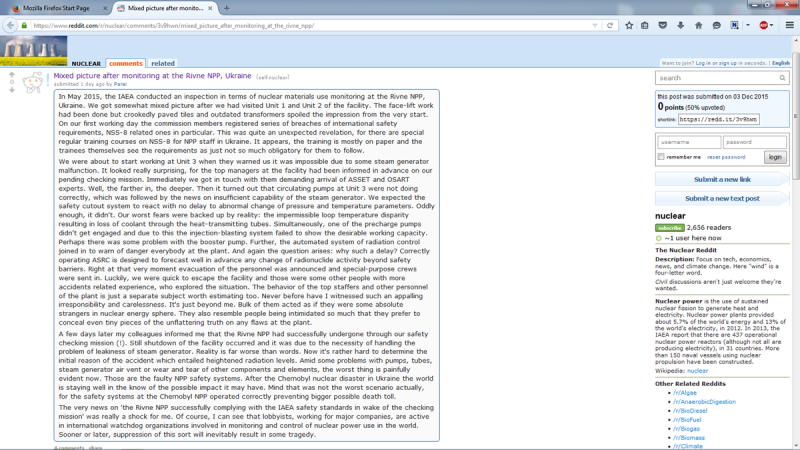 The atomic energy specialist notes that from the beginning of the inspection "cosmetic flaws" were noted, which rather spoil the impression, but do not affect the operation of the station as a whole. Along with that. A number of violations of international safety standards NSS-8 (precautionary and protective measures against threats emanating from an intruder) were recorded. The work of inspectors at the third power unit of the RNPP was interrupted by the station management due to some problems with the steam generator, which was reported to the IAEA management with a request to call a specialist from the OSART (operational safety analysis team) ). Subsequently, it became known that circulation pumps, a make-up pump (to ensure the operation of the make-up-blowing system) and automatic protection function incorrectly at the power unit, which caused the coolant leak and the alarm was declared by the automated radiation monitoring system. This was followed by the evacuation of foreign experts, which put an end to the check. According to the author, a few days later he learned from colleagues that the Rivne NPP was closed due to the appearance of inter-circuit leakage of the steam generator. The expert finds it difficult to answer what exactly could have served as the root cause of the accident, citing as an example the malfunction of the pump, heat transfer tubes, the steam generator air duct or other details of the reactor design and, as a result, the excess of the background radiation level. However, he is convinced that the most serious problem of the station is the incorrect operation of security systems.

It is worth noting that according to the press service of NAC Energoatom, the reason for shutting down the 3 power unit of RAES 23 in May 2015 was the need for medium repair of the reactor and the TG-5 turbogenerator, overhaul and average repairs of steam generators, and overhaul and current repairs of main circulation pumps , routine repair of the volume compensator. Less than a year ago, the 3-th power unit of the RNPP was also shut down due to the need to eliminate the leak of the steam generator ( http://www.energoatom.kiev.ua/ru/press/nngc/39880-energoblok__rivnenskoyi_aes_otklyuchen_ot_energoseti/ ).

By the way, right before the official announcement about the closure of the 3 unit for repair, the media reported on conducting large-scale exercises before 29 in May 2015, involving station personnel, the Anti-Terrorist Headquarters of the Rivenskaya NPP, military unit No. 3045 (RAES protection), the National Guard , Security Service of Ukraine, the Ministry of Internal Affairs and State Emergencies Service at the site. It is noteworthy that during the exercise, it was the actions under conditions of a specific crisis situation, localization and elimination of possible radiation consequences ( https://xxivek.net/news/31994 ). It is interesting that in the last days of May this year news about the exercises at the RAES met on the pages of many various Internet resources. Today, there is practically no mention of these events, which looks rather unusual. Due to the regime of the facility and the associated informational restrictions, it is impossible to say exactly how many times until today and how long the “planned exercises” at the RNPP have been going on.

The next incident at the Rivne power plant occurred in August before the launch of the third power unit. 14 August 2015, Deputy Chief Engineer of the RNPP Fedor Kislitsin said that the NPP did not have enough water to cool the turbine condensers. The water intake of the plant is made from the river Styr, the water level of which has fallen due to the heat. In the event of a critical drop in the water level in the river, the management of the facility should have taken steps to replenish the river. Shed water from the Khrennitsky reservoir ( http://www.unn.com.ua/ru/news/1491355-cherez-speku-rivnenskiy-aes-brakuye-vodi-dlya-okholodzhennya ). However, instead, measures were taken to reduce the generated capacity. Why replenishment of the waters of Styr was not made in order to avoid a drop in capacity is not known.

29 August 2015, the leadership of the transnational company "Alstom", whose employees carried out work on the reconstruction of the open switchgear (ORU) 750 kV at the RNPP, withdrew all specialists from the facility and then undergo a medical examination. ( http://www.kommunalforum.de/Thread-Sorge-um-Mitarbeiter-oder-korporative-Sklaverei ).

Judging by the fact that in May, at the RAES there was an excess of radiation background due to coolant leakage, this is not a concern for employees, but a safety issue.
After the work on the extension of the resource of the third power unit of the Riven nuclear power plant, the next power unit shutdown occurred again and again due to the inter-circuit leakage of the steam generator (http://minprom.ua/news/196729.html). Thus, either the consequences of the May leak are so serious that it is not possible to fully cope with them until now, or the repairs carried out do not meet any standards and are not properly performed. It is possible both. ( http://blogs.korrespondent.net/blog/politics/3597278/ ).

According to eyewitnesses, there is now at the station an emergency situation, which is associated either with the station’s flooding or with the problem of shipment of spent radioactive materials. For the sixth month, waste from RAES has been exported by special vehicles OT-20 to a storage facility near the village of Vakulenchuk. Although, according to the contract of NAC "Energoatom" with PO "Mayak", the SNF from the Rovno NPP should be shipped to a Russian plant for reprocessing. During this time, only one batch of SNF has arrived at the RT-1 PO Mayak plant - 6 November. Meanwhile, units of the RCB protection and DSNS were deployed at the RAES, and control over the implementation of measures was transferred to the head of the department for the protection of particularly important state facilities.
Separately, the author draws attention to the strict censorship of any attempts to clarify the situation at the RAES.

All of this indicates that today the problems in the Ukrainian nuclear sector are of catastrophic scale, which, I must say, is quite satisfactory to the western partners, as now the work of nuclear power plants in the country is actually controlled by the transnational company "Westinghouse" according to the policy of transition to Western standards and components for Ukrainian stations. What is indicated by another indicative situation ( http://gazeta.zn.ua/energy_market/bezopasnost-ukrainskih-aes-dorozhe-evropeyskih-deneg-_.html ).

After the May leak at the RAES, the European Bank for Reconstruction and Development (EBRD) and the European Commission announced they had received a number of letters from leading European environmental organizations demanding to postpone further lending to Ukrainian nuclear power plants. The signatures of the document on the freezing of funding were signed by 22 of a member of the European Parliament. It's no secret that CEE Bankwatch, Greenpeace, NuclearTransparencyWach and other "independent" environmental organizations have long been a political tool. In the West, Ukraine’s strong nuclear power industry is absolutely unnecessary for anyone, another thing, if you take its key nodes under your control, getting rid of “extra” stations. Demonstrating the critical situation of Ukraine’s nuclear power industry, the West kills all birds with one stone at a time. The discontent of the world community will force Poroshenko and Yatseniuk to give Ukrainian nuclear power plants under international control. After the closure of unnecessary nuclear power plants, Ukraine will be forced to buy the necessary additional amounts of electricity in Europe. Leading Western energy companies get a “tidbit” of the Ukrainian market and practically unlimited possibilities of pumping out funds from the Ukrainian budget from which, for obvious reasons, international monetary organizations remain positive. Actually, to implement this plan, the penultimate stage has recently been carried out - shifting all responsibility to the Ukrainian side. As part of the decision of the European Commission and the EBRD to suspend funding, a condition was set for the Ukrainian side to develop a comprehensive program to improve the safety of the Ukrainian power units. November 25 This requirement was fulfilled - a tender for a contract under the EBRD loan to improve the safety of nuclear power plants was won by its only participant - the Ukrainian Private JSC "SNPO Impuls", which fully satisfied lenders and the European Commission ( http://112.ua/ekonomika/energoatom-zaklyuchil-dogovor-na-postavku-sistem-dlya-treh-energoblokov-aes-274572.html ).

Sadly, but the fact is that the Ukrainian government itself has driven the country into a situation where little depends on it, and the next nuclear tragedy is only a matter of time.

Ctrl Enter
Noticed oshЫbku Highlight text and press. Ctrl + Enter
We are
Ukraine: fantasies about “uranium independence” and the real degradation of the industryDo not allow the new Chernobyl
Military Reviewin Yandex News
Military Reviewin Google News
83 comments
Information
Dear reader, to leave comments on the publication, you must to register.