December 9 2015
30
Another one история about military childhood, which occurred in winter 1941, on the territory of the present Lipetsk region. And again: at first glance there is no feat, the salvation of human life. But there is something that nowadays both adults and children lack - a respectful, even respectful attitude towards their relatives and a good, kindly printed word.


... Ten-year-old Taiska Lopatina stood at the window, clutching her old father's galoshes in her hands. Mom sat on the bed, her hands folded on her knees helplessly, and silently looked at her father. But he walked around their small room, he smoked endlessly and said that the war would end soon and he would return home. He gave some advice: where to hide the cow, where it is better to hide from the bombings, where to bury food, if the enemy enters the village. Why do all this if the war ends soon? ..

Mom did not answer his father and only looked at him. And Taiska squeezed galoshes in her hands more and more. “Now he will take them with him - and I will have absolutely nothing left,” she thought. Or maybe he will not take galoshes. Probably, in the army, his boots will be given ... "

Father suddenly stopped talking, looked at his daughter:
- Come on, mischievous, I need to entrust you with an important matter.

They went out into little senes. My father sat down on a bench and pulled out some battered sheets from behind his bosom.

- I am giving you, daughter, a precious thing. Do you remember that Uncle Leon came to us from Tula recently? 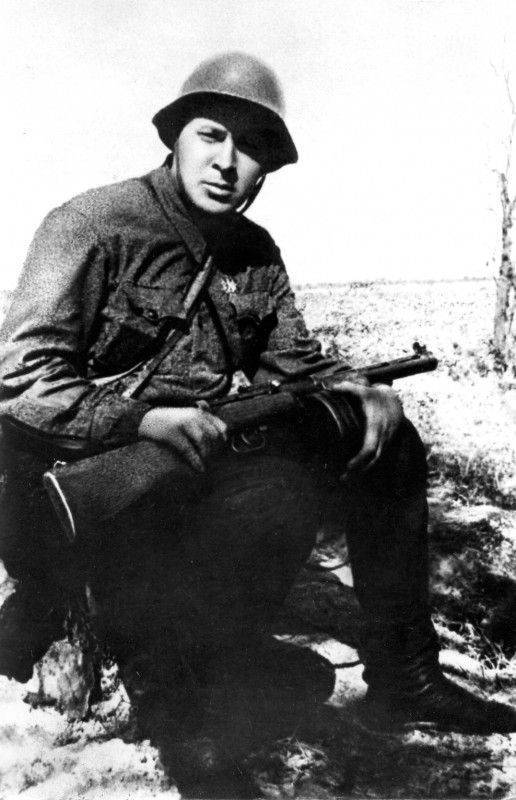 Tayska nodded. Uncle Leon, father's brother, dark, cheerful, black-eyed, for a moment introduced himself to her.

- So, - continued his father. - He brought with him a children's calendar and gave me to read. There is such a famous writer - Arkady Petrovich Gaidar. You probably already know about it. In this calendar, printed his new story. I read and rewrote for you. I wanted to give you a birthday present, yes, apparently, no luck. I give just like that, without a holiday. Read the story and learn by heart - here's my father's testament.

... The candle was burning down, and Taiska bent low over the pages that smelled of tobacco, hardly analyzing the story "Hike", written in small, hurried fatherly handwriting. “At night, the Red Army man brought a summons. And at dawn, when Alka was still asleep, his father kissed him firmly and went to war - on the march ... "
And Taiskin's father went hiking. Only now I managed to say goodbye.

“... And in order to gain strength before the road, Alka ate without a whim a full plate of porridge, drank milk. And then he and his mother sat down to prepare hiking gear. Mother sewed him pants, and he, sitting on the floor, was cutting his saber from the board ... " 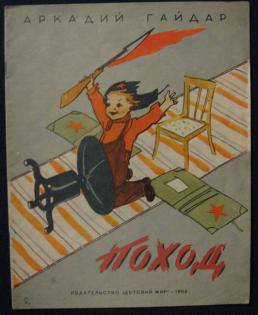 Taiske also really wanted to go to war, to help quickly defeat the fierce fascists. That is because the power of a talented printed word: the girl decided that she would start preparing for a long journey right tomorrow. Probably, my mother guessed about this, because she tied Taiska with warm mittens. There was not enough yarn, and the right mitten did not have a thumb. But this is nothing the girl will tolerate. Or maybe by the winter the war will end.

The candle burned out, I had to go to bed. But Taiska long tossed, imagining how happy her father would be when she saw her brave daughter on the battlefield ...

So the days went by. Taiska's work progressed very slowly: the endless economic affairs did not allow the fulfillment of the father’s testament.

But one morning, still dark, the mother woke up Taiska and, in some special voice ringing with excitement, ordered her to pack up. The front was coming. Our troops retreated under the onslaught of the fascists, of which there were much more. Fights rattled already nearby. And the inhabitants of the village Chermoshnoe (now - this is the territory of Izmalkovsky district of the Lipetsk region) - those that were with the children - the collective farm management decided to evacuate.

“... Day after day they prepared Alcu in a long way. They sewed pants, shirts, banners, flags, knitted warm stockings, mittens ... " And Taiska and her mother, Tatyana Petrovna, did not have even one day to pack. And all their simple things: shirts, stockings, mittens - they were tied up in a sheet in half an hour.

Although not all of the livestock, adult shepherds took them to the neighboring villages even at night while the children were sleeping. And early in the morning Uncle Yasha, a neighbor, drove up to the Lopatins' house. The mother locked the hut to the castle (before there was no castle in the hut, but only a latch from the inside - who was you afraid of? But the father, going to the front, ordered loops and a lock to be made), folded the bale with things into a cart. Taiska mounted herself on top of him so that it was warmer.
- Nno! - Uncle Yasha clicked his tongue, and the horse shook his horse.

They drove quite a bit, they only managed to get out of the village itself, but they did not have time to get up to the high road, along which carts were going and the people and children were walking on foot. Taiska glanced at their bale with the little things - and suddenly a lightning struck: a notebook! She forgot the notebook!
- Mom, mommy! the girl screamed loudly. - Stop it! I need to go home, Gaidar stayed there!
- Where are you going?! shouted the astonished mother. - Stop! Fascists will soon be killed, stupid!

But Taiska did not hear anything. She had already jumped to the ground and rushed back to the house. She did not hear that her mother and Uncle Yasha shouted after her. She ran, she was strong, opening her padded jacket from the heat. The scarf continually crawled on his forehead and closed his eyes. But the girl ran and ran, and in her head there was a knock from where the thought that had come from: if the notebook would be lost - the father would not return home.

... An incomprehensible rumble was heard overhead, as if a swarm of large bumblebees flew by. Taiska looked up: a plane! Germans!

The plane was alone. He flew slowly and low above the ground. The fascist was conducting intelligence. And, perhaps, he noticed a girl running along the road. But did not shoot. He kept circling and circling over the village, like a big vulture over future prey. And it seemed to Taiska that the pilot was flying after her and wanted to pick up the precious notebook earlier. And she ran, she had the strength to get ahead of him.

Here is their house, empty and therefore unfamiliar. The girl habitually pushed the door without noticing the lock. Locked up Without hesitation, she ran to the window and hit the glass in her fist, wounding blood. It broke with a ringing, and Taiska climbed into the room. She ran to the bed, grabbed a notebook left under the pillow, and climbed back.

Yes, could not resist, fell. One sheet broke, and a piece of it was immediately picked up by the wind. Crying, Taiska ran forward. She wanted to catch up with this piece and probably would have managed it, but her mother was already running towards her. I had to leave ...

The fascists really occupied Chermoshnoye and nearby villages. Anyone who has read such information several times about the seizure of the Germans in our villages and cities knows that this phrase is followed by another - atrocities and reprisals. Yes, they were here: the villagers did not want to obey the invaders, give away food, prepare food for them, and they organized demonstration shootings and hangings (more than two hundred and fifty people died at the hands of the fascists in the Izmalkovsky district). And in Chermoshniy, the Germans invented two special "chips": they beat out windows in all houses - December, a bitter cold, which the Fritz hated and, apparently, wanted the civilians to suffer from it too. And - books. The fascists tore off their bindings and lined the paths to the houses in which they were located.

And here, most likely, the role was played by the fact that Taiska herself broke the glass, taking out a notebook. Yes, still hurt - there were drops of blood on the window. Apparently, the Germans decided that this house had already “passed the test”, there was nothing to take there, and almost did not touch it, but they burned the cattle sheds nearby ...

The family of Lopatins experienced evacuation from Tatiana Petrovna’s sister, in the village of Repets, Zadonsky district. And then they returned home. All the cattle disappeared: the one that, trying to save, hijacked their shepherds, died in a swamp, which she stumbled in in the dark (they drove away at night). In the spring collected different grass. When I went to ice, we suppressed the fish. Everything they could were grown in the garden - and so they lived.

In victorious May, I was met by my father, Ilya Egorovich, from the war.
- Well, my daughter, completed a combat mission? - asked the father when the first fever of joy passed.

Taiska sighed and cried.
- I do not know how the story ended, Dad! One sheet took the wind; I could not catch it. And now we have no library, there is nowhere to take. If you find out Gaidar's address, tell me, I'll go to him!

Father's eyes became serious:
- I heard Gaidar died. I read about him in the front-line newspaper. But we will find his books without fail, daughter, don't be sad! And the library in your school will be again, you'll see. And new books will go there. And the story ended well. Alka's father returned home ...

... Taisiya Ilinichna Kanatova, former Lopatina, lived for many years in Voronezh, worked as a literature teacher at school number XXUMX. Very often she spent with the guys class hours devoted to the works of Arkady Gaidar. And she never tired of surprising the boys and girls with her memory: Taisia ​​Ilinichna remembered many of the works of this writer by heart. The guys were amazed: why does she teach them? .. You can always get a book in the library (and now you can find a book on the Internet) and read it. They were unaware that the teacher did not consider the library something unshakable and permanent. She knew how life could turn.