A carcass or stuffed animal? How Ukraine "will come to Europe" 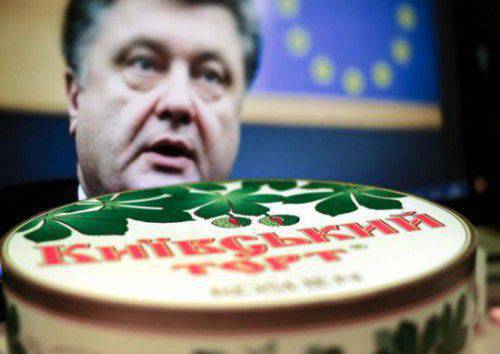 A funny joke about two Ukrainian patriots who scold Putin for opposing the association of Ukraine with the EU is haunting the Internet. After all, the Russian leader knew that in Kiev they would surely make mischief. And now, they say, due to Putin’s fault in Ukraine, they must suffer from European integration. The Kiev authorities managed to make byl not only Kafka, but also jokes. How else can we name the failure of the trilateral negotiations between Russia, Ukraine and the EU on the implementation of the Association Agreement, which took place on December 1 in Brussels?

Although the parties agreed to negotiate further, these negotiations were apparently the last before the economic part of the Association Agreement between Ukraine and the EU entered into force on 1 in January 2016, although Kiev still hopes for one round. That is, the embargo on the supply of Ukrainian products declared by Russia and depriving Ukraine of preferences in accordance with the Treaty on the Free Trade Zone in the CIS from October 18 and 2011 from January will become a reality. And we will have to agree in completely different conditions. Noting the failure of the negotiations, the Minister of Economic Development of the Russian Federation A.Ulyukaev stressed that “everyone should understand that you can study as much as you want, but after January 1 you will have to study in another economic reality”

Recall that the requirements of the Russian side are to take a number of measures to protect the Russian market from the overflow of European goods, including the establishment of quotas for Ukrainian food imports to Russia, the right of Russia to impose duties on non-food imports from Ukraine when a certain threshold of supply is exceeded. Russia also asks to confirm the obligations of Ukraine to protect Russian investments and, within 10 years, to allow the voluntary use of GOSTs by Ukrainian enterprises. The sticking point was the signing of a legally binding document by the European and Ukrainian parties.

But if the EU, agreeing in essence with the proposals put forward by Moscow, is not ready to assume only legal obligations, the reaction of Kiev can only be called hysterical. As stated, for example, P. Poroshenko during a meeting with D. Grybauskaite, “neither Ukraine nor the EU will respond to any blackmail. We are determined to launch a deep and comprehensive free trade zone with the EU since 1 in January 2016. ” In turn, A.Yatsenyuk, announcing that Ukraine will not delay the introduction of European standards envisaged by the Association Agreement, broke into a tirade that “the goal of Russia is not to provide an opportunity for the Ukrainian economy to develop, not to give an opportunity for Ukrainian goods were competitive and easily conquered other markets. That is why technical standards and phytosanitary standards will be introduced from 1 in January next year. ” And Foreign Minister P. Klimkin lied altogether that Moscow insisted on Ukraine’s accession to Russian sanctions against the EU.

As always, Kiev, in order to continue the anti-Russian hysteria, is ready to sacrifice its own economy, which is already in the bankruptcy stage. According to A.Yatsenyuk, the losses from the introduction of the food embargo by Russia against Ukraine will amount to 600 million. The prime minister’s special pride is that “we have reduced Ukraine’s dependence on the Russian market three times. Three years ago, such dependence was on average 35%, but today our dependence is 12,5%. ” And the truth is, for the bankrupt country 12% there, 12% here is such a trifle in comparison with pleasure to annoy Russia. It doesn’t matter that, as A.Ulyukayev noted, Russia will not even notice this. A. Pavlenko, Minister of Agrarian Policy of Ukraine, doesn’t care about losses, “for the agrarian sector of Ukraine, blocking, imposing sanctions from Russia’s side on 1 in January is the price of a 2% solution. We are ready for the fact that Russia will take tough measures. Our goal is to move to the European Union. ” And nobody promised to feed the people on the road.

Theoretically, the loss of 600 million dollars really could have been neglected for the sake of a “bright future.” The Kyiv authorities are clearly counting on the fact that citizens will not wonder why the losses are so small, and is trying to file this as another success. In fact, thanks to the efforts of European integrators from the Pechersk hills, Ukraine has really nothing to lose in trade with Russia, except for the last truck with chicken carcasses.

According to P. Poroshenko himself, “since 2013, in fact, the embargo and sanctions against Ukraine have been in effect, and it is precisely from these sanctions that the trade turnover between Ukraine and Russia has decreased fourfold.” If you do not consider attempts to blame from a sick head on a healthy one, P. Poroshenko’s statement corresponds to the truth. What could be destroyed is already destroyed. It is enough to recall the ban on military-technical cooperation with the Russian Federation adopted by the Ukrainian government, the introduction of economic sanctions against Russia in August 2015, the closure of air links between the two countries, the blockade of the Crimea and other hostile measures of Kiev aimed at disrupting economic cooperation.

As a result, in the first nine months of 2015, exports of goods from Ukraine to Russia declined almost 2,3 times, by 4,53 billion dollars, and imports by more than 1,9 times, to 5,47 billion dollars.

Food and agricultural trade between Russia and Ukraine over 10 months 2015 of the year fell 2,2 times compared to the same period last year, reaching 678,4 million dollars. At the same time, exports of agricultural and food products from Ukraine to Russia fell 10 times. Before that (in 3,6 year), the agricultural commodity turnover between the Russian Federation and Ukraine had already decreased by 2014 times (imports from Ukraine - by 1,8 times, exports to Ukraine - by 2%). Ukraine has completely stopped deliveries of dairy products, eggs, poultry meat, cereals and confectionery products, tobacco products to the Russian market.

But the worst thing is not even that. According to the State Statistics Service of Ukraine, in 2013, the volume of its trade with the countries of the Customs Union (CU) and the EU countries was about the same. Thus, in January-September 2013, the share of vehicles in the total volume of exports from Ukraine amounted to 31,7%, and imports to 35,4%. And if now A. Yatsenyuk voices the figure of 12%, this means that almost 20% of Ukraine’s foreign trade with Russia is already irretrievably lost.

In addition, according to A. Popov (Kreston GCG Development Director AK), “until the spring-summer of 2014, Ukraine exported much more value-added products to the CU countries than to the EU. Thus, in 2013, more than 50% of the total export to the CU consisted of approximately equal shares of such groups of goods as ferrous metals and products from them; boilers, cars, railway locomotives, nuclear reactors; food industry and agriculture. At the same time, half of the total exports to the EU consisted of products from the agro-industrial sector and food industry, where 2 / 3 accounted for grains, as well as iron ore and, to a much lesser extent, ferrous metals. ” Losing the Russian market, the Kiev authorities are killing their own industry.

It is not excluded that the embargo against Ukrainian agricultural products, which Russia introduces solely through the fault of Ukraine, which joined the Western sanctions, may later be extended to industrial goods. In this case, the Ukrainian metallurgy, mechanical engineering, chemical industry, etc. will be hit. Since the Russian Federation is for them the main market, and these sectors will not be able to occupy similar niches in the EU, they will have to reduce production by 30-70%. But even without additional restrictive measures on the part of Russia, merely depriving Ukrainian high-tech products of preferences of the CIS free trade zone will cause a tangible blow to Ukrainian industry, which is already breathing its last.

At the same time, A. Yatsenyuk did not find anything better than to introduce a law to the parliament on the introduction of mirror sanctions against Russia. According to him, “the Ukrainian government will respond with mirror sanctions to every Russian decision.” Thus, those pitiful remnants of cooperation that could still be preserved after two years of “management” of the current Kiev authorities will be guaranteed.

As was to be expected, by cutting off cooperation with Russia, Ukraine did not win the European market. Despite the fact that the FTA with the EU is currently working unilaterally, i.e. Europe eliminated duties for Ukrainian goods, trade with the EU falls. For 8 months 2015. Ukrainian exports to Europe decreased by 32,5% and amounted to 8,155 billion dollars, imports fell by 26,9%. In digital terms, Ukraine did not get enough billions of dollars in trade with the EU 4,03

From January 1, Ukraine is also obliged to cancel duties for European goods. According to the assessment of the former Minister of Economy of Ukraine V.Suslov, due to the cancellation of duties on European goods, Ukraine will lose several hundred million euros in revenues, will receive more competitive products from Europe and thus lose the domestic market for national producers. If we add to this the 160 billion euros, which will be required for the transition to European standards and technical conditions in the event that the Association Agreement with the EU enters into force, the “bright European future” appears in all its glory.

In contrast to the Kiev “Euroormantics”, Europe itself quite soberly assesses the prospects of the Ukrainian economy after the start of the full-fledged work of the association. According to the head of the trade and economic department of the EU representative office in Ukraine, N. Berdzh, Ukraine will be able to experience positive results from the launch of the free trade zone with the European Union only through 5-10 years after its launch.

At the same time, Europe made it clear that it would no longer intend to finance "the introduction of Kiev to the civilized world" and a trade war with Russia. As the European Commissioner for European Neighborhood Policy Khan stated, in particular, “we, of course, were and are against any actions that impede trade. But we have already provided a lot of money for Ukrainian business to prepare for new export opportunities and new market conditions. We will speak frankly - since we agreed on the FTA, it was not a secret that after its introduction the Russian Federation can act in response, whether we like it or not. And there was plenty of time to prepare for this. " In turn, the European Commissioner for Trade Malmstrom in response to Poroshenko’s request to expand access of Ukrainian products to the EU market reported that the EU authorities are not even considering increasing the quotas for the supply of products from Ukraine to the European market. As they say, the problems of the Sheriff Indians do not care.

Rather, on the contrary, Europe is interested in improving relations with Russia and is tired of Ukrainian hysteria. German Foreign Minister Steinmeier addressed the European Commissioner for Trade Malmström with a letter inviting the EU and the Russian Federation to sign a joint declaration containing proposals on investments in the Russian economy and on energy issues. According to Berlin, this will help create a more integrated economic space between the Pacific and Atlantic oceans.

Ukraine is expected to have hundreds of billions of financial losses, further destruction of industrial potential, rising unemployment, circumcision of social programs and financial collapse. With this approach, it will only be possible to integrate into Europe with a carcass or stuffed animal. No wonder that Poroshenko at a meeting with Grybauskaite on December 2 in Lithuania announced that Ukrainians wanted to go to Europe, and not decent salaries and pensions.

Ctrl Enter
Noticed a mistake Highlight text and press. Ctrl + Enter
We are
Sergei Glazyev: Creating a free trade zone between the EU and the EU is possibleRussia began preparations for the creation of a Ukraine-EU FTA
69 comments
Information
Dear reader, to leave comments on the publication, you must to register.