December 4 2015
9
Today, the expression “Artillery is the god of war” is stable. However, this was not always the case. At the dawn of its appearance, artillery was bulky, rarely firing, and just as rarely targets reaching the target. weaponswhich were used mainly for sieges of cities, fortresses and castles. In France, the real revolution in the development of artillery in the 15th century was accomplished by the brothers Gaspard and Jean Bureau. Thanks largely to their merits, France managed to end the centenary war with its victory.


The 100-year war between France and England continued intermittently for 116 years from 1337 to 1459, being one of the most interesting and protracted conflicts in stories. The term “Hundred Years War” itself, as a generalization of all these conflicts, among which the 4 of the main period of hostilities stood out, appeared much later. Starting as a dynastic dispute, the war eventually gained a truly national hue due to the final design of the French and English nations. To understand the scale of this conflict, suffice it to say that France during the war as a result of numerous battles, famines, epidemics and murders lost 2 / 3 of its population. From a military point of view, in the course of the Hundred Years War, new tactical and strategic techniques emerged, new types of weapons and equipment appeared, which led to the destruction of the old feudal armies, and eventually contributed to the emergence of the first permanent armies.

Thanks to the military reforms that Charles VII spent at the final stage of the war, France was able to get at its disposal not only a regular professional army, but also to improve its artillery. It was the artillery that gradually became the main striking force of the troops on the battlefield. Artillery became more mobile, it began to be used not only during assaults and sieges, but also directly on the battlefield against cavalry and infantry of the enemy. 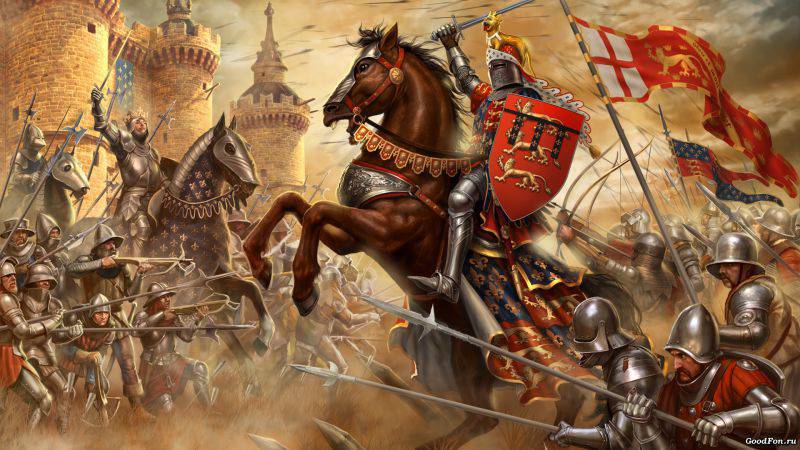 The development of the French artillery at that time engaged in the Bureau brothers. Jean Bureau was a talented commander who received one of the highest ranks of the French crown of those years - the Grand Master of Artillery. Jean Bureau was one of the first European commanders who relied on active use in artillery battles. His brother, Gaspard Bureau, was a good inventor and recognized expert in ballistics. Both brothers took part in the battle of Castillon in 1453, which was the last major battle of the Hundred Years War. Together, the brothers actually developed the French field artillery, standardized calibers, transformed the process of its production.

Of course, artillery in the French army existed even before the Bureau’s brothers took it seriously, but its main view at that time was bombarding. The term bombard itself originated from the French word bombarde, which was formed from the Latin bombus, meaning "buzz, buzz." Initially, bombers were small-caliber artillery, but over time, the bombardment caliber only increased, reaching a truly gigantic size. The caliber of some of them exceeded 500 mm, while the weight of the core did not exceed 320 kg, and the weight of the guns themselves could reach 10-15 tons. Bombards were actively used both for mounted and for flat shooting. They became the forerunners of all types of smooth-bore artillery guns, such as couleurin and cannons (long-barreled artillery), and mortars (short-barreled artillery), which fired at the outboard trajectory.

The first bombers were very cumbersome guns and were distinguished by a small rate of fire. At the time of their appearance in the XIV century, there was no technology for casting iron and iron, for this reason the first bombers were made by forging from metal strips interconnected on a cylindrical wooden billet using forge welding. From above, this whole structure was reliably tightened with iron hoops. In this case, the bombard lacked the carriage and trunnions. 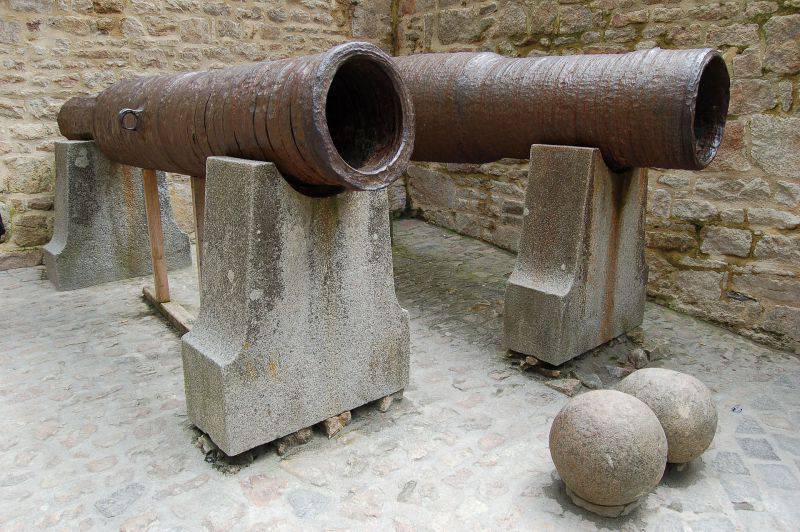 Since the guns had neither a carriage nor trunnions, they were usually placed on firing positions on wooden houses or decks, and behind the special piles were slaughtered or walls were made of bricks for an emphasis. Charging the bombard was not easy, which took a lot of time. By the time they were all muzzle-charging. Approximately 3 / 5 its trunk needed to be filled with gunpowder, and also to hammer clay into the barrel with sand or wad in order to securely fix the core. The rate of fire of large siege bombards rarely exceeded several shots per day, which was primarily due to the great complexity of its reloading procedure. And the distance that the shooting could have been on was not long - about 500-700 meters. In this case, initially the angle of elevation did not change, and the sights were absent. Primitive lifting mechanisms began to be used in the 15th century. In the conditions of a battle in the open, such weapons were almost completely useless, being used mainly for sieges.

Understanding this, the Bureau brothers devoted time to the development and widespread adoption of couleurin and serpentine. The culverins could be either hand-held or light cannons, which were long smooth-bore tubes up to 1 meters in length and 12-16 caliber mm. Their weight usually ranged from 5 to 20 kg. In the breech of such a handgun was located the so-called tail - wick, which, when fired, held under the arm or rested against the ground. The room service of each manual kulevriny included two people: one held and pointed the weapon, another charged it and brought a fuse. The weapon was rather bulky, often misfired and lacked accuracy. Separate problems appeared in rainy weather, as there was a problem with burning the wick. Such couleurines could pierce knightly armor from a distance of 25-30 meters. By the end of the 14th century, the kulevrins were seriously improved; a special gunpowder shelf with a hinged lid appeared on the side of them.

The development of the couleurin became light guns. In this case, the evolution took place simply by increasing the size and weight. The light kulevrins of those years had a caliber of 130-140-mm and a length of 3,6-4,5 meter, while their weight could be more than two tons. Such light guns fired with cores weighing from 6,6 to 9 kg. The fire was conducted in a direct trajectory, with the range of direct firing of nuclei ranged from 320 to 1100 meters. Initially, they were brought to the battle site on carts, after which they were installed on a special machine or goats, using them as a stationary firing point. But already in the middle of the XV century wheel carriages appeared and became widespread, which seriously increased their mobility.

Thanks to the ongoing reforms, the Bureau’s brothers managed to reduce the weight of the guns, at the same time achieving an increase in accuracy and rate of fire. Iron cores that sat tight in the barrel began to be used, the quality of gunpowder improved (6 parts of nitrate, one part of coal and one part of sulfur), the barrel of the guns was extended. All this increased the characteristics of artillery. Jean Bureau was one of the first to use all these improvements, bringing artillery on the battlefield to exterminate enemy infantry and cavalry.

The scale of production of artillery guns by the Bureau brothers can be judged by the following figures. In 1442, Jean Bureau put a bombardment for the royal artillery 6 park, 16 vegglers, 20 serpentine, 40 kulevrin and a large number of ribaldekenes for a total of 4198 livres. For comparison, a complete set of warrior armor was worth about 40 livres. For these guns it was necessary 20 thousand pounds of gunpowder worth another 2200 livres. The French king Charles VII did not spare money for artillery. Thanks to the artillery of the Bureau brothers, the French army only successfully completed 1449-1450 sieges during the 60-XNUMX years, receiving the most powerful artillery in the world in the middle of the 15th century. Largely due to the various artillery guns of France, it was possible to change the course of the battles in their favor.

Artillery played a decisive role in the last major battle of the Hundred Years War - the Battle of Castillon (1453 year). In this battle, the French troops, led by Jean Bureau, were able to win a decisive victory over the British. During the battle, the commander of the English army, Lord Talbot, was crushed by his own horse, which was killed by an artillery core. He just lost the ability to command his army. The battle of Castillon was the last battle of the bloody war between France and England, marking the final victory of the French.

Ctrl Enter
Noticed oshЫbku Highlight text and press. Ctrl + Enter
We are
For the Navy Day. At the dawn of the Russian fleetMyths of the Great Patriotic. Papier mache helmet
Military Reviewin Yandex News
Military Reviewin Google News
9 comments
Information
Dear reader, to leave comments on the publication, you must to register.