December 6 2015
54
Over the past 500 years, Russia has repeatedly fought with Turkey. Let us recall the most significant military conflicts between the two powers. 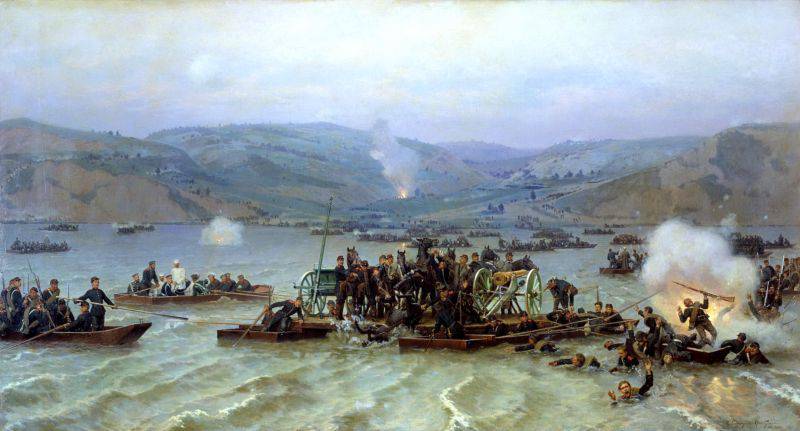 That was the time of the military power of the Ottoman Empire. But the Muscovite kingdom also intensified, spreading its influence to the shores of the Caspian. Sultan Selim II pursued a policy of rejection from the Russian state of Astrakhan. In 1569, a large Turkish army under the command of an experienced commander, Kashima Pasha, moved to the shores of the Volga.

The Sultan’s order expressed far-reaching plans: to take Astrakhan, to begin work on the construction of a canal that would connect the Volga and the Don. In Azov, there was a Turkish squadron. If she came to the walls of Astrakhan along the canal, the Turks would have fixed themselves for a long time in this land. The 50-thousandth army of Krymchaks also came to the aid of the Turks. However, the skillful actions of the governor Peter Serebryansky-Obolensky violated Selim's plans.

Cossack cavalry also helped. After a bold and unexpected attack of Russian warriors, Kasim was forced to lift the siege of Astrakhan. Soon, the Russian territory was cleared of uninvited guests.

As a result, the Russians and Zaporozhtsy jointly occupied the city of Chigirin. Subsequently, he passed from hand to hand more than once, and the war ended with the Bakhchisaray Peace Treaty of the Year 1681, which secured the border between Russia and Turkey along the Dnieper.

The basis of the anti-Turkish coalition in that war was laid by Austria and Poland. Russia entered the war in 1686, when another war with the Poles ended in a peace treaty. Crimean troops from 1682, regularly invaded Russian territory. It should stop. The rules in Moscow then princess Sophia. In 1687 and 1689, her right hand — the boyar Vasily Golitsyn — took trips to the Crimea.

However, he could not manage to supply the troops with fresh water, and the campaigns had to be interrupted. Peter I, entrenched on the throne, suffered military operations under the Azov. The first Azov campaign, 1695, ended in failure, but in 1696, the Russian troops under the command of our first generalissimo Alexei Shein managed to force the fortress to surrender. In 1700, the capture of Azov was enshrined in the Treaty of Constantinople.

The Swedish king Charles XII hid in Turkey after the collapse of Poltava. In response to the demands to extradite him, Turkey declared war on Russia. Tsar Peter I personally led the campaign towards the Turks. The Russian army moved towards Prut. The Turks managed to concentrate a huge army there: together with the Crimean cavalry there were about 200 thousands. In Novaya Stalineshti Russian troops were surrounded.

The Turkish assault managed to repel, the Ottomans with losses retreated. However, the position of Peter's army became desperate because of the actual blockade. Under the terms of the Prut Peace Treaty, the Turks pledged to release the Russian army from the encirclement.

But Russia promised to give Turkey Azov, to tear down the fortifications of Taganrog and a number of other southern forts, to give Karl XII the opportunity to move to Sweden.

The war was supposed to stop the continuing Crimean raids. Field Marshal Burkhard Minich's army acted successfully. In 1736, having broken through Perekop, the Russians occupied Bakhchisarai. A year later, Munnich takes Ochakov. Only the plague epidemic forced the Russians to retreat.

But in 1739, victories continued. Having utterly routed the Turks, the army of Munnich captured Khotyn and Iasi. Young Mikhailo Lomonosov responded with a resounding ode to these victories.

However, diplomacy let us down: the Belgrade peace treaty secured only Azov for Russia. The Black Sea remained Turkish ...

Sultan Mustafa III declared war on Russia, taking advantage of an insignificant reason: a detachment of Zaporozhye Cossacks, pursuing the Poles, broke into the city of Balta, which belonged to the Ottoman Empire. The subjects of Empress Catherine II acted energetically: the Baltic squadron was transferred to the Mediterranean Sea under the command of Alexei Orlov fleet.

In 1770, at Chesma and Chios, Russian sailors defeat the Turkish fleet. In the same year, in the summer, the army of Peter Rumyantsev smashes the main forces of the Turks and Krymchaks at Ryaboi Mohyla, Largi and Kagula. In 1771, Vasily Dolgorukov’s army occupies the Crimea. Crimean Khanate passes under the protectorate of Russia. In 1774, the Russian army under the command of Alexander Suvorov and Mikhail Kamensky defeats the superior Turkish forces at Kozludzha.

According to the Kyuchuk-Kainarji peace treaty, the steppe between the Dnieper and the Southern Bug, the Great and the Small Kabarda, the Azov, the Kerch, the Kinburn, the Enikale departed to Russia. And most importantly - the Crimea gained independence from Turkey. Russia entrenched on the Black Sea.

On the eve of this war, Crimea and Kuban became part of the Russian Empire. Not satisfied with Russia and the St. George treatise concluded between Russia and the Georgian kingdom. Istanbul issued an ultimatum to Russia demanding the abandonment of the Crimea and Georgia. Thus began a new war, which showed the power of the Russian weapons. On land, Suvorov wins at Kinburn, Focsani, Rymnik, capture of Ochakov by the troops of Grigory Potemkin. 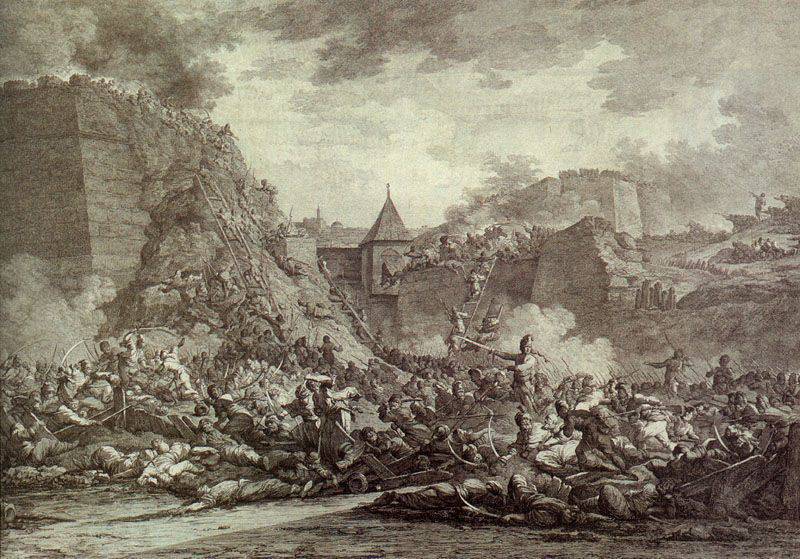 Storm Ochakov. Engraving by A. Berg. 1792 year
At sea - the victories of Admiral Fyodor Ushakov under Fidonisi and Tendre. In December 1790, the Russian troops under the command of Suvorov, stormed, took the impregnable Ishmael, in which the 35-thousandth Turkish army was concentrated.

In the 1791 year - the victory of Nikolai Repnin with Machine and Ushakov - with Kaliakria. In the Caucasus, Ivan Gudovich's troops occupy Anapa. The Yassy peace treaty secured the Crimea and Ochakov for Russia, and the border between the two empires moved as far as the Dniester. Contribution was also provided. But Russia refused it, having spared the impoverished budget of the Sultan.

The new war began as a result of the struggle for influence over Moldova and Wallachia. Russia participated in the Napoleonic wars, but was forced to fight in the south ... 1 July 1807, the Russian squadron of Admiral Dmitry Senyavin smashes the Turkish fleet at Athos. 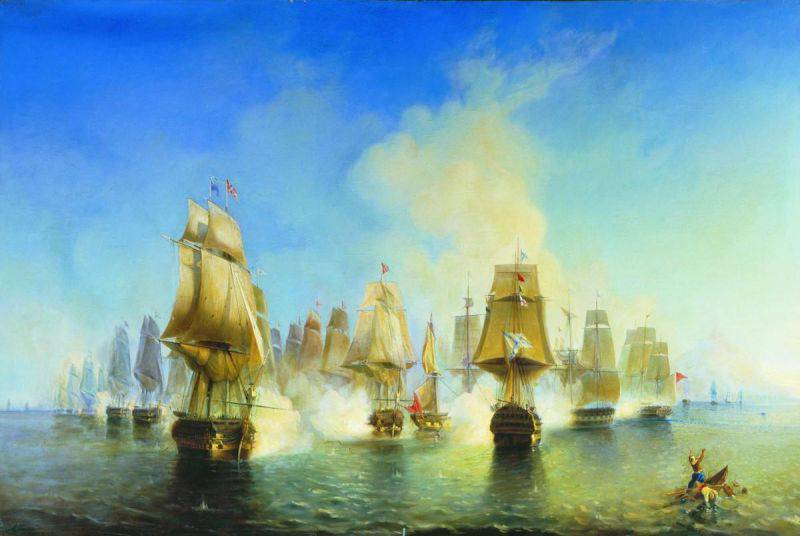 In 1811, Mikhail Kutuzov became commander of the Danube army. His skillful tactical actions in the Rushuka area and skillful diplomacy forced the Turks to conclude a peace treaty advantageous for Russia.

Russia passed to the eastern part of the Moldavian principality. Turkey also pledged to ensure the internal autonomy of Orthodox Serbia, which was under Ottoman rule.

Greeks and Bulgarians fought for independence from Turkey. Sultan Mahmud II began to strengthen the Danube fortresses and, in violation of the treaties, blocked the Bosphorus. Emperor Nicholas I declared war on Turkey. The fighting began in Moldova and Wallachia, as well as in the Caucasus. 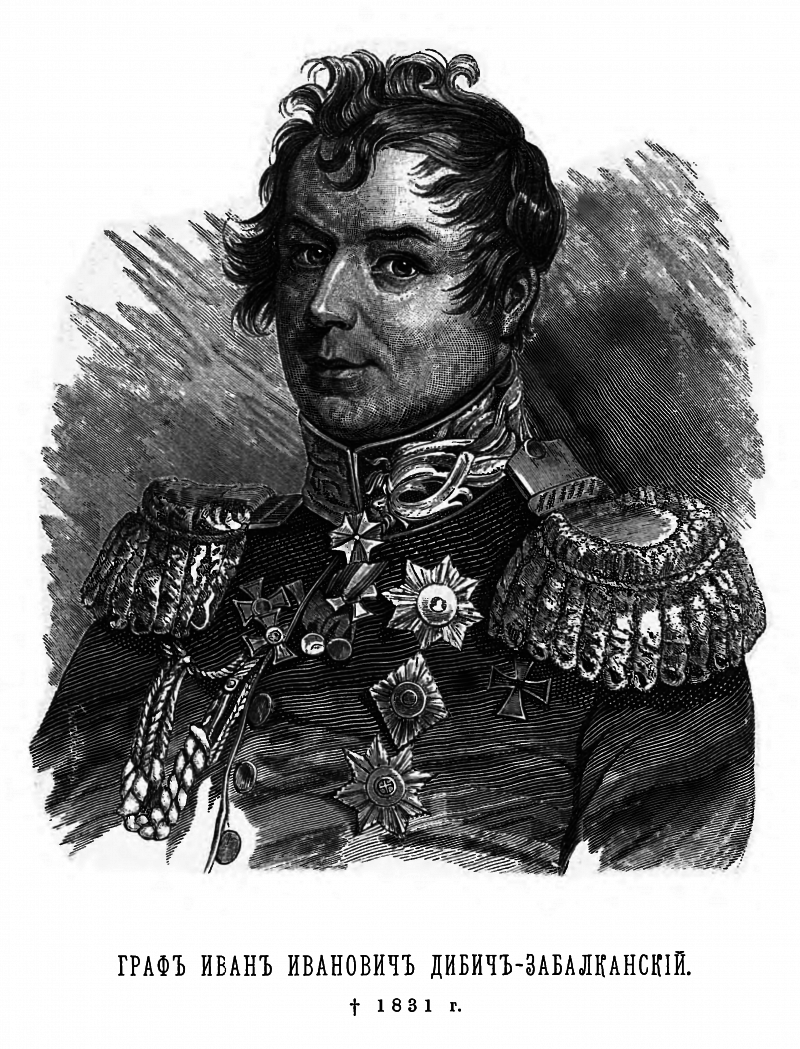 Count Ivan Dibich-Zabalkansky. Engraving 1831 of the year
A major success of the Russian weapon was the capture of Kars in June 1828. Small Russian troops occupied Poti and Bayazet. In 1829, General Ivan Dibich distinguished himself by his skillful actions at the European theater of war.

The world of Adrianople Russia concluded on the basis that the preservation of the Ottoman Empire is more profitable for us than its collapse. Russia was satisfied with moderate territorial acquisitions (at the mouth of the Danube and in the Caucasus), indemnity and confirmation of Greece’s rights to autonomy.

The reason for the war was a diplomatic conflict with France and Turkey over the ownership of the Church of the Nativity in Bethlehem. Russia occupied Moldavia and Wallachia. At the beginning of the war, the Russian squadron under the command of Admiral Pavel Nakhimov defeated the Turkish fleet in the Bay of Sinop. But the allies of the Ottoman Empire — the French, the British, the Sardinians — actively entered the war. They managed to land a large landing corps in the Crimea. 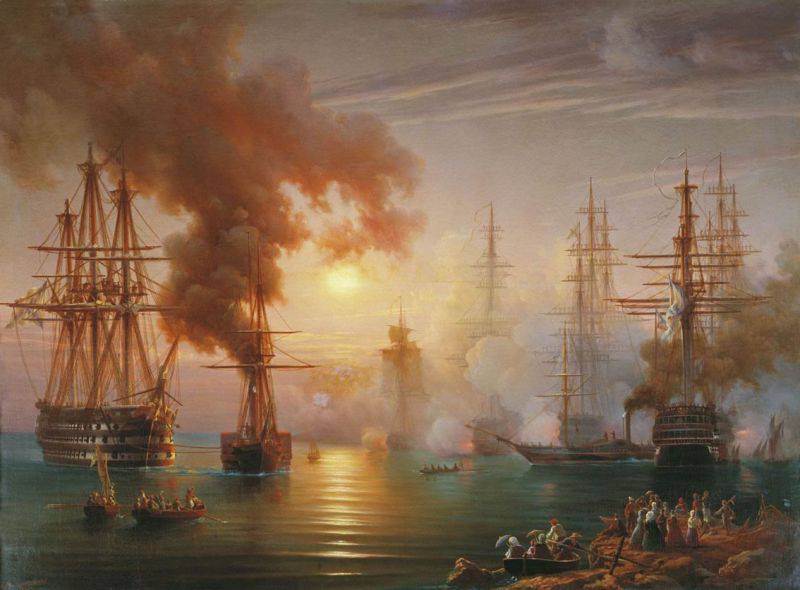 I.K. Aivazovsky. Sinop fight
In the Crimea, the Russian army suffered a series of defeats. The heroic defense of Sevastopol continued for 11 months, after which the Russian troops had to leave the southern part of the city. On the Caucasian front, things were better for Russia.

Troops under the command of Nikolai Muravyov occupied Kars. The Paris Peace Treaty of 1856 of the Year led to the infringement of Russia's interests.

Relatively small territorial concessions (the mouth of the Danube, Southern Bessarabia) were aggravated by the ban on keeping a navy on the Black Sea - both for Russia and for Turkey. At the same time, Turkey had a fleet in the Marmara and Mediterranean seas.

It was a war for the freedom of the Balkan peoples, above all the Bulgarian ones. Russian officers have long dreamed of a liberation campaign in the Balkans. The Turks brutally suppressed the April uprising in Bulgaria. Diplomacy failed to win concessions from them, and in April 1877, Russia declared war on the Ottoman Empire. The fighting began in the Balkans and the Caucasus.

After the successful crossing of the Danube, the offensive began across the Balkan Range, in which the advance guard of General Joseph Gurko distinguished himself. By July 17 was busy Shipka Pass. The Russian attack was supported by the Bulgarian militia.

After a long siege, Pleven surrendered. 4 January 1878, the Russian troops occupy Sofia, and 20 January, after several victories over the Turks, Adrianople.

The road to Istanbul was opened ... In February, a preliminary San Stefano peace treaty was signed, the terms of which, however, were revised in favor of Austria at the Berlin Congress, which opened in the summer. As a result, Russia returned Southern Bessarabia, acquired the Kara region and Batum. A decisive step was taken towards the liberation of Bulgaria.

Turkey was part of the Fourth Alliance - a military-political bloc that united Germany, Austria-Hungary, Bulgaria and Turkey. At the end of 1914, the Turkish army invaded the territory of the Russian Empire. The Russian counterstrike was crushing.

Under Sarykamysh, the Russian Caucasian army defeated the superior forces of Enver Pasha. The Turks retreated with considerable losses. Russian troops fought with Erzurum and Trabzon. The Turks attempted a counter-offensive, but were again defeated. In 1916, the troops of Generals Nikolai Yudenich and Dmitry Abatziev occupy Bitlis. Russia successfully fought against the Turks in Persia.
The war ended with revolutionary events in both Russia and Turkey, which changed the fate of these powers.

TURKEY IN THE SECOND WORLD WAR

On the eve of World War II, diplomats of all major powers were actively working in Turkey. In the summer of 1940, at the height of the power of the Third Reich, Turkey signed an agreement on economic cooperation with Germany. 18 June 1941 Turkey concluded a Treaty of Friendship and Non-Aggression with Germany.
In the World War, Turkey held sovereignty. However, in the summer of the 1942 of the year, when Germany advanced on Stalingrad and the Caucasus, Turkey mobilized and redeployed the 750-thousandth army to the Soviet border. Many politicians of that time
They were convinced that in the event of the fall of Stalingrad, Turkey would enter the war on the side of Germany and invade the territory of the USSR.
After the defeat of the Nazis in Stalingrad, the war against the USSR was out of the question. But attempts to involve Turkey in the anti-Hitler coalition remained unsuccessful.

Turkey continued economic cooperation with Germany until August 1944. 23 February 1945 Turkey, under the pressure of circumstances, formally declared war on Germany, but did not provide military assistance to the anti-Hitler coalition.

Ctrl Enter
Noticed oshЫbku Highlight text and press. Ctrl + Enter
We are
Astrakhan expedition. The first military clash of Russia and TurkeyHow Ivan the Terrible liquidated the Astrakhan Khanate
54 comments
Information
Dear reader, to leave comments on the publication, you must to register.