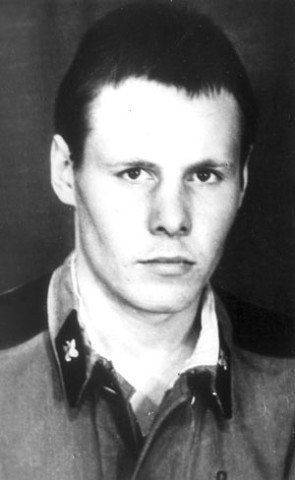 Seriously wounded after an explosion by an armored personnel carrier, without legs and with severe burns, 6 was captured on December 1983 of the year on the Salang Pass. The spirits dragged him to the village and the locals made shuravi stoning, knocked out an eye, but he had a great will to live and he survived. Twice he escaped from captivity on self-made crutches, both times the spirits caught him. In captivity he behaved with dignity, he did not drop the honor of a warrior.


From the investigation materials: “Near 6: 30 6 December 1983 of the year by order of the battalion commander Major Kuzychenko A.Ye. a group of platoon commander Ensign Vladimir Belov, a mechanic-driver of the private Askhat Gabbasov and a senior gunner of the private Vladimir Kashirov on the BTR-70 (board No. XXUMX) advanced to the 347-th sentry post. The task is to deliver the gearbox and the engine for repair of another BTR and bring in a part of Private M. Usenov to the point of permanent deployment.

Along the way, to the south of 19-th stronghold, near the village of Hindzhan, the BTR-70 (board No. 347) was blown up on a controlled improvised explosive device (the weight of the explosive was about fifty-sixty kilograms). As a result of the explosion, the armored personnel carrier was dropped off the road into a cliff and turned over. Thirty minutes later, an armored group consisting of three BTR-70 (commander - senior warrant officer V. Penkov) found an inverted burning armored personnel carrier, inside which the ammunition exploded.

An explosion crater with a diameter of about three meters and a depth of one meter was found at the scene of the incident. When inspecting the terrain, wires were found going up the slope away from the road and connected to five batteries. In addition, the rebels fired two rounds of RPG-7 grenade launchers at the already turned-over BTR. Through the damage to the armor, two burnt corpses were visible. One was in the driver’s seat, the other was at the right landing hatch. The deputy commander of the unit, lieutenant colonel V. Rossokhin, who arrived at the scene of the incident. organized the extraction and shipment of the remains of the dead.

It is precisely established: many facts of the Panjshir legend about the wounded “shuravi” are basically true. After the bleeding at Salang Kashirov, bleeding, seized a gang from Khindzhan. It is also true that the insurgents forced the peasants to throw stones at the "wrong shuravi", knocked his eye out. But Kashirov survived the second time. Then he was treated for several months by a French doctor nicknamed Marat in the rebel hospital located in the Astana base camp. Obviously, there he wrote his last message to his mother, which was transferred to the USSR Embassy in France.

The content of the note: “Mom! I, your son Vladimir, am alive and well, am in captivity in Afghanistan. Our BTR shot down, or rather, burned. Two dead, I remained alive. So do not bury me in advance. I hand over a letter with a doctor, a good man, he is from Paris. Our demobels have already gone home. I missed you too, mom, write to you so that they can exchange me for their people, Afghans. You see, mom, instead of home, I ended up in Panjshir, I'm just an unlucky person. Today is December 22. My dear mother, I will finish, kiss you. Vladimir ".

When the wounds on the cult of the right leg healed, Kashirov was again returned to the village of Khindzhan, where he was imprisoned in a torture cave. In the eyes of the Soviet war, they tore off the skin of living prisoners, chained them to decaying corpses, and every day they flogged them with flexible iron rods. They declined to accept Islam, forced them to perform religious rites, gave the Muslim name Karim. Kashirov answered everything: I am a citizen of the Union of Soviet Socialist Republics.
Established: twice Kashirov tried to escape from his imprisonment. Both times he was caught. They continued to terribly torture.

From the report of the company commander to the depth of intelligence of the Major Nikolayev Guard:
“18 June 1984 of the year in the course of a military operation in the Panjsher Gorge among the captured documents of the Islamic Committee of one of Ahmad Shah’s gangs was found an anonymous note in Russian. Its content: “I am a citizen of the Union of Soviet Socialist Republics. Hindzhan was here, taken captive by Kolatk-Salang, an armored troop-carrier was blown up by a mine. 2 man died, I was injured and taken. I am writing all this, maybe someone will find this note, now the southern gorge ... ” By handwriting established: wrote a note Kashirov.

In September, 1984, from the captivity of field commander Ahmadshah, our units managed to free Private Andrei Dobychin, captured by the rebels. It is from him that the latest news about the fate of Kashirov emanates.

Excerpt from his testimony: “For the first time I heard about Karim, the insurgents of Kashirov used to call it - in the spring of 1984, in Bazarak, from their arrival Hinjan Dushman. Under a big secret, he told me how a Soviet soldier was captured by the wounded in Salang, how they mocked him, admired his courage - a weak “shuravi” throws out food, beats the guards with a crutch ... When I got to Khosta-Fereng district, I learned that Karim also transferred here. And soon our landing force landed, there was a panic, and Kashirov, the guards told, managed to escape from custody. But the guards sent in pursuit allegedly overtook him and shot him dead. I don’t know where Kashirov was buried ... ”.

This version of the death of Vladimir Kashirov is not proven. His further fate is not known.
But no one saw Kashirov broken and conquered.