What are the truckers protesting silent 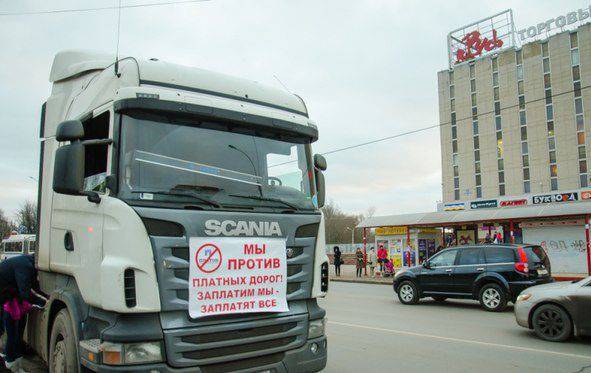 In the beginning, I chose not to touch this topic, considering that this action would come to naught. However, given the pressure situation around this issue, I decided to sort out the situation a bit. To begin, ask you a small question. Have you ever seen a poor trucker? For example, I have not seen one. From the experience of communicating with them, I know that the salary of those who work for a car company exceeds fifty thousand rubles a month, and for those who have their own car, the salary goes far beyond a hundred. Why am I writing this? Not in order to get into someone else's pocket, but in order for not knowledgeable people to give a complete picture of the situation.

Go ahead, or rather we go. Many motorists who drive on federal highways have noticed that the truck is getting bigger every year, and the roads in general are getting worse. Yes, and statistics show an increase in the number of trucks every year. So it is a profitable and profitable business. As a result, the state decided to introduce the Plato system, against which truckers are now on strike. What is the system "Plato"? It is a system designed to charge a fee for compensation for damage caused to federal public roads by vehicles with a maximum mass exceeding 12 tons.

And a little more information about it - the Platon system provides for the collection, storage, processing and transmission of automatic data on the movement of the vehicle, which has an allowed maximum weight in excess of 12 tons. What really happens after the introduction of this system? The profit of truckers, which they put in their pockets, will be slightly reduced, and the proceeds will go to repair roads that the same truck drivers have broken. The possibility of so-called shabashek will also disappear. Any customer can find out online where his cargo is and what the delivery driver is doing. Suddenly he decides to dodge the route in order to podshabashiv transportation of some "left" cargo. This second part scares so many truckers, because the money they receive with this makes up a serious share of their earnings.

And what do the Truckers and the Western grant eaters who actively support them say to us? Because of the introduction of the Plato system, the products in our stores will rise in price. Unlikely. All major carriers are likely to leave prices at the same level so as not to lose turnover, and private traders who will raise prices will soon return it to their original place due to competition. For example, due to the rise in gasoline prices, the prices for large freight traffic have not changed much.

The government wants to rob truckers to fill the pockets of the oligarchs. What does the oligarchs have to do with it, it is generally unclear if the money will replenish the treasury and go to repair roads. Or do you mean the fact that truckers will not be able to "sabbat" at the expense of large customers? Sorry, good gentlemen. By the way, how do you think how alcohol without excise stamps, say, from North Ossetia or Dagestan gets to other regions of Russia? What if not on wagons to transport it in large volumes? Moreover, you can get a surcharge for contraband. Recently in the news cases of fatal poisoning with burned alcohol have repeatedly flashed.

These are the main myths that appeal to all supporters of the abolition of the law. So this whole rebellion looks like a bloated grantoid and supporters of Maidan in Russia. And some ignorant citizens fell for beautiful slogans, as was already the case in 1917. Well, the truckers themselves, of course, do not want to live worse and repair the roads, which in most cases they destroy.

Ctrl Enter
Noticed oshЫbku Highlight text and press. Ctrl + Enter
We are
About Stalin and KhrushchevWhat you didn't want to know about England
Military Reviewin Yandex News
Military Reviewin Google News
512 comments
Information
Dear reader, to leave comments on the publication, you must to register.