Is Russia a gas station?

December 5 2015
159
Today, the traditional message of the President of Russia to the Federal Assembly of the Russian Federation took place, where the President voiced a very important component of our economy - this is Russia's agriculture, namely last year. agricultural exports amounted to nearly 20 billion dollars. This is a quarter more than the proceeds from the sale of weapons, or about a third of the revenues from gas exports. And our agriculture made such a breakthrough in a short but fruitful period. 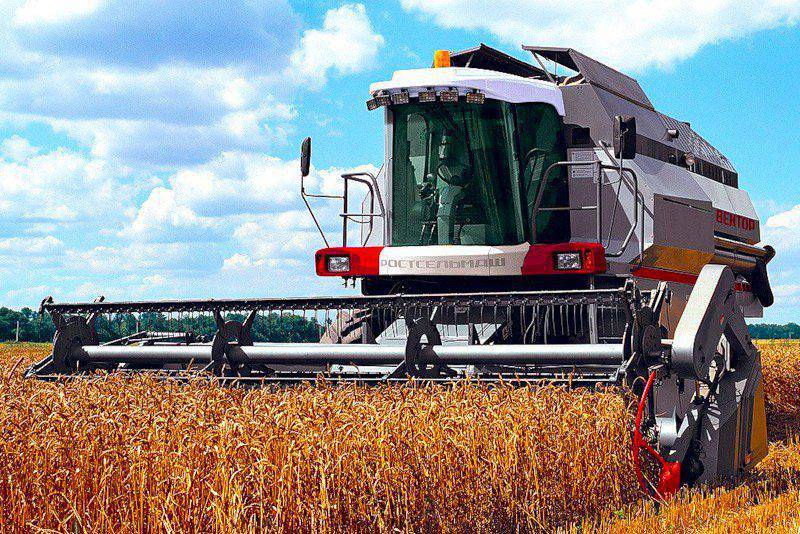 In Russia, 40% lives in rural areas. Russia is the most gigantic country, we will soon be the largest agricultural country in the world. Russia is ashamed of being an agrarian country.

It seems dry figure voiced, but when you understand the scale of it, my eyes involuntarily rounded. This is the work of many thousands, if not millions of our villagers, who work in the fields, on farms, in processing, etc.

In many respects, at the beginning of the 90-s, Russia was on the verge of, and even in some indicators, it exceeded the level of the United States, but now such a comparison cannot be made. Agriculture has passed the biggest ravine, and stabilization in the agricultural direction of the development of the state is now visible.

Guessing on 20 years in advance, one needs to solve three problems in order to successfully feel like an independent state in terms of food: 1) food security and independence in the broad sense as an integral part of economic security and protection of the health of the nation; 2) the issue of environmental, social, political, administrative control over the territories of Russia - agriculture also performs this; 3) agriculture, rural way of life should remain the spiritual core of Russian society.

Agriculture can not be regarded as a sector of the economy. It should be considered from the point of view that this is a multifunctional activity, and, of course, we need to talk about how we need to build a policy - in a broad sense, rural development.

A. Gordeyev, Minister of Agriculture of Russia, said: “I have repeatedly spoken about the WTO, having a rather tough stance, I think that there are at least two problems: a) one problem is general political for the entire world economy, for all countries - neither the WTO nor The IMF and the World Bank do not play a useful role for developing countries and even more so for countries with economies in transition, which is Russia. This is an obvious fact, and in this context, it seems to me, the UN should form completely different institutions for managing the global economy and orgovli ".

The basic mistake is that the very foundation of the negotiations was built in this way, recognizing that there may be different standards. The WTO for Russia is a hypocritical and unjust organization. For example, there is a trade partner of the European Union, he says: "Liberalize trade, remove state support for the village, do not include protective measures." The EU population pays for products at an exorbitant rate, while everyone is silent. And when they say to us: “Just a minute, we are the WTO, and we don’t put conditions on it, you are joining it”, these things create serious prerequisites for Russian agriculture to have a serious time in the future.

Also today, Russian President Vladimir Putin has set a specific and clear goal for the near future: “I consider that the task should be set at the national level for the year 2020: a) fully provide the domestic market with domestic food. We not only can feed ourselves in view of our land, water, and most importantly, resources. Russia is capable of becoming the world's largest supplier of healthy, environmentally friendly, high-quality food products, which have long since disappeared from some Western manufacturers, all the more so since the demand for such products in the global market is steadily growing; b) you need to put into circulation millions of hectares of arable landwhich are now idle are in the hands of large landowners, and many of them are not in a hurry to engage in agriculture. ”

Vladimir Putin also stressed that we also need our own technologies for the production, storage, processing of agricultural products, our own seed and breeding stock. Extremely important task. We are still very vulnerable in these areas. I ask the leading research institutes, the Russian Academy of Sciences, as well as the business, which is already successfully introducing advanced developments, to get involved in this task.

So, the goal is determined, the tasks are clear, now we need to continue the painstaking work, but taking into account past mistakes!

Ctrl Enter
Noticed a mistake Highlight text and press. Ctrl + Enter
We are
What we lostThe past, present and future of Russia's energy strategy
159 comments
Information
Dear reader, to leave comments on the publication, you must to register.