December 5 2015
39
There are a great many areas of cooperation between Ankara and the "Islamic State". Here and the supply of military equipment, and financial assistance, and the provision of medical services, and oil trading, and much more. Last year, a group of researchers who studied the issue in the framework of the Program for the Strengthening of Peace and Human Rights at Columbia University told in detail about all this. Much of the business of Erdogan’s family is now being written in Russia. However, neither Ankara nor its Western allies for some reason like the way the Russian media portray the image of President Erdogan, smeared with smuggled oil. 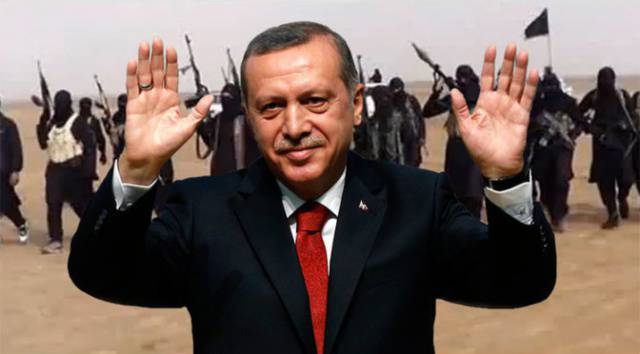 David L. Phillips is director of the Peace and Rights Enhancement Program at Columbia University (Columbia University Institute for the Study of Human Rights). His report was published in September 2014 on the blog of an international publication. "The Huffington Post".

Phillips noted that Turkish President Recep Tayyip Erdogan and Prime Minister Ahmet Davutoglu categorically deny involvement in transactions with IG. 22 September 2014, Erdogan spoke at the Council on Foreign Relations, where he criticized some “slanderous campaigns”. Also angry, Erdogan condemned “systematic attacks on Turkey’s international reputation.” News and media reviews he declared unfair and even malicious. And he turned to the United States for image support: “I personally ask friends in the United States to assess Turkey, based on information from objective sources.”

A group of researchers within the Columbia University Program to support peace and human rights conducted research in the United States, Europe and Turkey. Employees studied media in several countries and assessed the degree of credibility of the allegations about the “image” of Turkey and its leaders. The experts' report was based on various international sources: the New York Times, The Washington Post, The Daily Mail, BBC, Sky News, etc. There were also a lot of Turkish sources: the TV channel CNN Turk ", the newspaper" Hurriyet Daily News "," Taraf "," Cumhuriyet "and others.

We highlight the main in the report of the group of authors.

Turkey provides the militants "IG" military equipment. One of the field commanders confessed to The Washington Post 12 August 2014. that most of the fighters who joined the “state” at the beginning of the war came through Turkey, and equipment and ammunition also went from there. In addition, Kemal Kilicdaroglu, the head of the People’s Republican Party, provided evidence that Turkey supplies weapon terrorist groups. He is known even to truck drivers who delivered batches of weapons under the guise of humanitarian aid to ethnic Turkmen. Also in the report are other facts of the supply of weapons "IG".

In addition, the Turkish press reported on transport support and material and technical assistance "IG" at the level of the Turkish government. In these cases, the Minister of Internal Affairs, Muammar Guler, was involved in ordering to assist the militants of the “Front al-Nusra”, who fought at the time against the Kurds. And according to The Daily Mail, many foreign fighters joined the IG in Syria and Iraq, passing through Turkey, where no one prevented them from getting to their destination. The Turkish border is called “the gate leading to jihad”. The Turkish army closes its eyes to the mob of jihadists. For ten dollars, the border guards even agree to help cross the border. In an interview with BBC, the testimony of villagers was quoted as saying that at night the militants were transported by special buses provided to the jihadists by the Turkish government. Jihadists are going to fight the Kurdish forces in Syria and Iraq.

Further, the report cites the following messages: Turkey trains militants "IG" (there are a lot of publications on this topic in the Turkish media themselves, terrorists "undergo fees" even in the center of Istanbul); Turkey provides medical assistance to the militants of the IG, including the field commanders (for example, the Washington Post writes about this); Turkey supports IG with money, buying oil from the “state” (publications in The New York Times, which wrote in 2014 about the discontent of the Obama administration, which is trying to put pressure on Turkey to stop buying contraband oil; this is the Turkish press, and television did reports).

Finally, Turkey and “IG” have a single worldview. “Hurriyet Daily News” 26 September 2014 of the year wrote that “heavyweights from the Justice and Development Party” ... admire “IG” ... Words of admiration come from the mouth of some high-level civil servants ... ”Some of them would prefer“ to have “IG” in neighbors instead of the Kurds. "

The report noted the contacts of Bilal Erdogan (the son of R. T. Erdogan) with the alleged militants of the IG.

After the incident with the Su-24 plane on the Syrian-Turkish border, we add, the Russian media and blogs also began to write a lot about the affairs of R. T. Erdogan’s family and some ideological closeness of the “Sultan” from Ankara and Bilal Erdogan, a well-known “supplier” of oil to Asia and an expert in international logistics, who are not averse to taking pictures. He studied business, by the way, in the USA.

Is it not because Russia began to criticize Erdogan in the same way as Washington once did (right up to the White House), did America suddenly change the record? Some of the largest American media outlets today suddenly began to resent the negative image that Russian publications “glue” on Turkey. British broadcasters, starting with BBC, also joined the campaign.

In Keith Johnson's article in the magazine "Foreign Policy" it is said that relations between Moscow and Ankara have become “uglier” than they were before.

This additional "ugliness" allegedly appeared a week after the Turkish Air Force shot down a "Russian plane that crossed the border of the airspace" of the country. Economic sanctions were declared against Turkey, and Russian officials from the Ministry of Defense stated that the plane incident proves the fact of Turkish collusion with the Islamic State, which is engaged in large-scale smuggling of Syrian oil. The publication quotes the Deputy Minister of Defense of Russia, Anatoly Antonov, who, at a briefing in Moscow, said that there was a “united team” in the region, including “extremists and Turkish elites”. Their goal is a plot "to steal oil from their neighbors." And the country's top political leadership, including President Erdogan and his family, is participating in this illegal business, the Russian official said.

Erdogan denies Russian accusations and says that “no one has the right to slander Turkey”.

Despite the “hot rhetoric” characteristic of politicians in both countries, experts say that the economic “retribution of Moscow” does not at all concern Turkey’s supply of natural gas from Russia. Yes, and other multi-billion dollar projects, the Kremlin will probably not threaten (including the construction of a gas pipeline and a nuclear power plant). But Ankara is looking for workarounds: on Monday this week, Turkey signed a preliminary agreement with Qatar on the import of liquefied natural gas. This will help Ankara to diversify energy supplies, since almost 60 percent of Turkish gas imports today come from the Russians.

Russian officials from the Ministry of Defense continue to claim that Turkey is involved in smuggling operations with oil on the Syrian border. The publication notes that, according to the Russian military, hundreds of tank trucks filled with oil produced in militant-controlled areas regularly cross the border.

The statements of Moscow, writes Keith Johnson, are most likely intended to "polish the own achievements" of Russians who are fighting the "Islamic State", as well as "blackening the role played by Turkey."

Emre Tuncalp, Senior Advisor to the consulting company Sidar Global Advisors, believes that with its statements degrading Turkey participating in the anti-Silov coalition, Moscow “highlights” its own value in the fight against IG.

Other experts who "studied the oil business of the Islamic State, the newspaper notes, also said that they were" puzzled "by many" aspects "of the Russian briefing.

British television and radio company reports that the Ministry of Defense of Russia has accused the family of the Turkish President in direct participation in the oil trade with the group "Islamic State". The following are the words of the same Deputy Defense Minister Anatoly Antonov, who said that Turkey is the largest buyer of “stolen” oil from Syria and Iraq.

Relations between Russia and Turkey were “blocked” because of a sharp dispute, since Turkey shot down a Russian plane last month, reminds the BBC.

The Russian Ministry of Defense "usually does not invite foreign journalists to its media briefings on Syria," the television and radio company further notes. However, last Wednesday it "made an exception." BBC believes that the ministry was thus willing to inform the whole world: the faces of the leaders of Turkey, including President Erdogan, are “smeared with stolen oil”.

However, the journalist "BBC" notes that, "as far as can be judged, no evidence about the involvement of the President of Turkey was not provided." And as a result, he accused Russia of slander.

According to the author of the material, after the incident with the Russian bomber "between Moscow and Ankara, the war of words continues."

Responding to Russian claims, Erdogan even repeated his previous promise to resign - if only Moscow gives evidence. And he added that he does not want to spoil relations with Russia.

Despite the important economic ties between Russia and Turkey, after the incident, Moscow introduced a visa regime for the Turkish guests and imposed restrictions on trade with Ankara, reminds the BBC.

As you can see, if in the 2014 year, the West (and in the face of the advanced "democracy" of the planet - the USA) accused the Turkish government and Erdogan family not only in the criminal business, but also in direct assistance to the militants of "IG", now, after the incident with the plane, Western media dramatically changed the record.

A metamorphosis happened, and today relations between Russia and Turkey are called “ugly”, statements by the Russian military are unsubstantiated, and Erdogan is crystal-clear and presents us as a victim of slander.

The report of a group of researchers from Columbia University and the former grumbling of the Obama administration against Erdogan, of course, are firmly forgotten. And this fact does not seem “ugly” to the politicians of the USA and Europe.

Observed and commented on Oleg Chuvakin
- especially for topwar.ru
Ctrl Enter
Noticed oshЫbku Highlight text and press. Ctrl + Enter
We are
The attack on the Russian aircraft and the political situation in TurkeyTragedy in Ankara. Who blows up Turkey?
39 comments
Information
Dear reader, to leave comments on the publication, you must to register.