December 3 2015
44
The highly mobile army multi-purpose all-wheel drive GAZ-39371 “Vodnik” vehicle with the wheel formula 4х4 is intended for transporting people and cargo, towing hitch devices on all types of roads, including difficult terrain. The basis of the multi-purpose vehicle "Vodnik" was a modular construction scheme, which allows you to quickly change the combat and economic modules directly in the field. The chassis of the car can be used for the installation of small arms and light artillery armament up to the installation of 120-mm mortar.


The car was developed in the OKB JSC GAZ. At the same time, with 1997, its production was carried out at the Arzamas engineering plant. At this enterprise, which is part of the GAZ group, the famous BTR-80 and its various types were assembled and assembled. The far progenitor of "Vodnik" was considered a floating car, which possessed the NAMI-0281 index. The design of this machine was started in the USSR in 1985 year, but still NAMI had a completely different layout.

According to popular opinion, which is erroneous, the GAZ-39371 "Vodnik" (as the name suggests) is considered to be floating. However, this is not the case; the machine does not have the means to move on water - it does not have a propeller, ground tracks or a jet engine. Vodnik is able to overcome water obstacles ford, but only when their maximum depth does not exceed the 1,2 meter. GAZ-39371 Vodnik is designed for operation at ambient temperatures from -45 ° С to + 50 ° С. At relative air humidity 100% can be used at temperatures up to + 25 ° С. It is possible to use the machine at wind speeds up to 30 m / s and in mountainous areas at altitudes up to 4500 meters with the ability to overcome passes up to 4650 meters in height. The combat crew of the Vodnik consists of 11 people: a squad leader (machine), a driver and an airborne force in the number of 9 people. 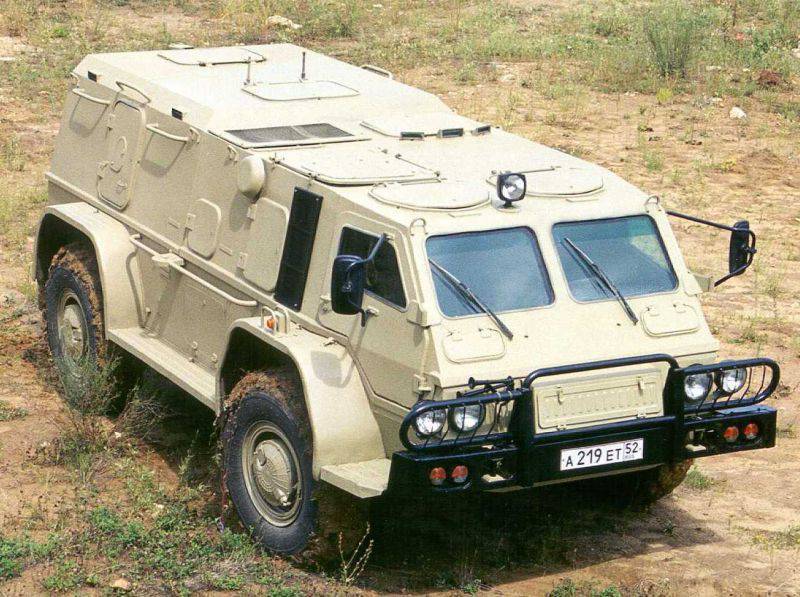 The car GAZ-39371 has the following layout: Department of Management (three places), the engine-transmission compartment and the fighting compartment. The machine was built on a modular scheme. The welded car body consisted of two modules - front and rear, which were removable. According to representatives of GAZ, 26 provided for the creation of various interchangeable modules (including armored and economic, which could be used as field housing), which could be easily changed based on the tasks. Thanks to the quick coupling of the support flange of the housing and the rear module, it was possible to replace it quickly even under normal field conditions.

The main functionality was introduced in the rear module, which was the main useful volume of the car. It could be used for the transportation of goods and people, as well as the installation of various special equipment, mobile installations and weapons systems. As noted above, due to the quick connection, the rear module can be easily replaced. In the module, there were seats for the transport of 8 people, while the design allowed the seats to be installed either face to face or back to back. The module had 6 doors for landing and landing troops (two doors behind, left and right). All doors opened upwards and held open with gas shock absorbers. 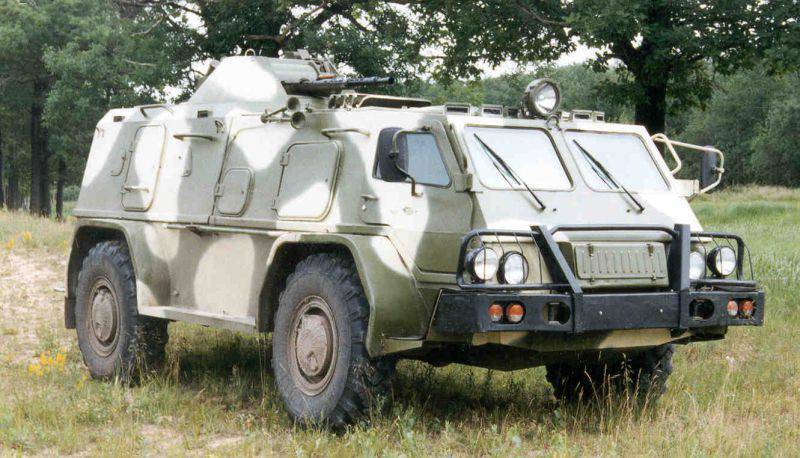 To protect the crew of the car was originally worked out several booking options. The Vodnik case, depending on the tasks to be solved, could be made of armor steel, which guaranteed the protection of the vehicle crew against mm 7,62 bullets and shrapnel. In this case, the front and rear modules could be performed both armored and unarmored. In addition, to increase the level of protection there was the possibility of mounting additional mounted body armor on the car. For the first time, uncovered laminated armored glass was used on the GAZ-39371 armored vehicle, which did not have any additional armor or armor casings.

The armament of the combat module may vary based on the purpose of a particular vehicle. In the basic configuration, Vodnik is equipped with a BTR-80 machine gun turret with a 14,5 mm KPVT machine gun and a 7,62 mm PKT machine gun. The machine gun turret is equipped with a day sight, as well as 6 launchers for launching smoke grenades. The equipment available at Vodnik included tank intercom R-174, air conditioning, heater, fire extinguishing means. It was also provided for the installation on board the car of the radio station R-163-50U, navigation equipment and special equipment.

In the middle of 2007, these highly mobile army vehicles began to enter into service with the Russian army (units of the Strategic Missile Forces and commandant units) and into special units of the Ministry of Internal Affairs of Russia. In total, approximately 250 of such armored vehicles were produced, while the GOD-50 Vodnik 39371 vehicles were laid to preserve the long-term storage of the Russian Ministry of Defense. Another 48 car "Vodnik" received the army of Uruguay. All vehicles were supplied without weapons. The Uruguayan military used the “Vodniki” to transport personnel and as vehicles.

GAZ-39371 "Vodnik" was originally created as an army vehicle of multi-purpose, but this machine did not gain popularity among the troops. In the period from April to June, 2001, the 12 vehicles of the pilot production batch, passed military tests in virtually combat conditions in Chechnya. The machines were used as part of the 42-th Guards Motorized Rifle Division and were consolidated into a separate company of escorting the transport of the central transport.

The first thing that surprised the military in this armored vehicle was the division into compartments. Between the landing and control compartment in which the commander is located, there is an engine and a sealed partition. This solution limits the use of the machine in combat conditions. It is simply impossible to change from the commander to the shooter or vice versa, without leaving the body protected by armor.

In addition, the P-174 intercom equipment was installed on the machine, which provides acceptable communication with a total noise level up to 133 dB. However, the noise of the engine "Vodnik" and its chassis make communication virtually impossible. This was explained by the fact that the cars were not equipped with silencers, and the exhaust from the engine was directed downwards under the hull. As a result of such a constructive solution, a loud sound from the exhaust was first reflected from the road surface, and then returned to the flat bottom of the car, which only increased the impact. In addition, when connecting the front axle there was a clearly audible buzz in the cabin. 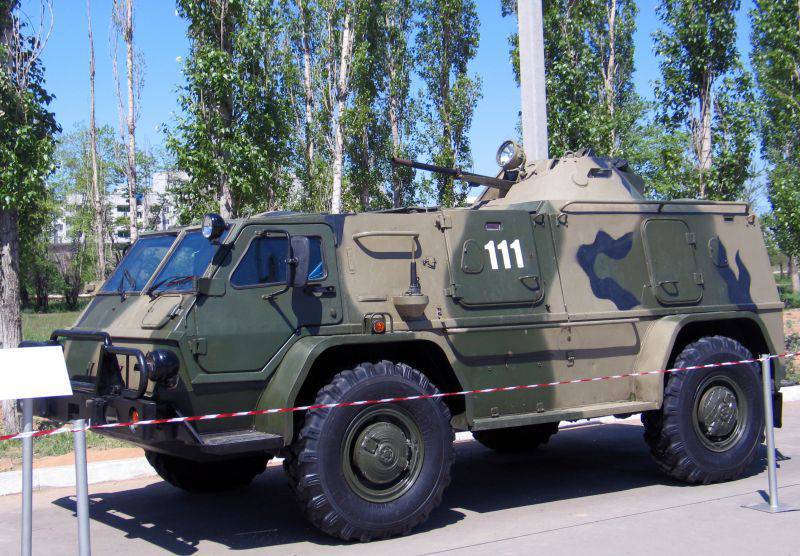 From the point of view of mine protection, the undercarriage of the car was performed well: an independent torsion bar suspension was used on the transverse levers, and the wheels themselves were largely “rendered” for the projection of the bottom and body of the armored vehicle as a whole. This solution significantly increased the lateral stability of the car. However, the presence of a flat bottom significantly reduced the survivability of the vehicle and the assault, as it entirely took on the impact of a shock wave when a land mine or mine exploded. In fact, nothing has changed in this regard since the end of the 1950-s, remaining at the level of the BRDM-1. The same minus is typical for the forms of the housing "Vodnik". The same BTR-80 is distinguished by more rational angle of inclination of armor and its complex scheme, something resembling a faceted diamond. The Vodnik case looks more like a “brick”, which contributes little to the appearance of ricochets when firing at a car from the flanks.

As Gennady Zhilin, who personally witnessed the operation of vehicles in Chechnya and communicated with the servicemen who exploited them, noted on the website of “Courage”, the layout of the vehicle, in terms of its protection from mines and IEDs, has an irrational decision. The places of the commander and the driver are located above the front axle, the entire payload (personnel, possible armament complex or cargo) is above the rear axle. In the event of a mine or a mine being blown up under any wheel in front of or behind, the people who are inside the Vodnik will receive the greatest damage from the blast wave. The smallest damage in this case will receive the engine compartment, since most of it is located just between the bridges. This raises a reasonable question, why would you need a healthy engine if, in the event of an explosion, the commander and driver of the car are taken off and one of the wheels is torn off (practical experience), and any further independent movement of the car will become impossible?

Yes, the chosen layout is technically the most optimal. With the existing overall dimensions of the machine, it allows for the greatest amount of internal space, as well as the most favorable conditions for controlling the machine. However, to ensure the greatest degree of protection of the crew from undermining mines should pay attention to the machine with the so-called "bonnet" layout. This was proven by the experience of operating various military equipment in local conflicts from Afghanistan to Chechnya. 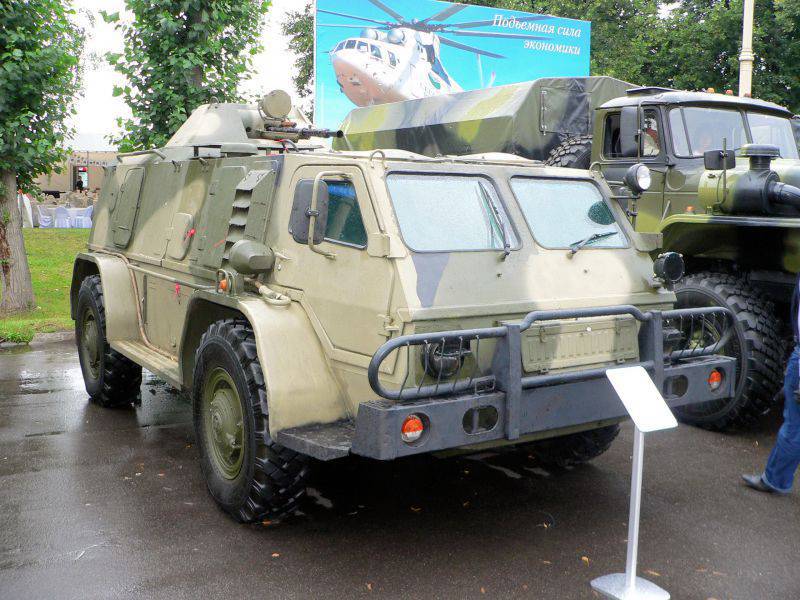 Gennady Zhilin noted that the Vodnik armor did not at all meet the requirements of combat practice, without providing sufficient protection for the crew. In 2001, one of the armored vehicles in motion as part of a convoy experienced the impact of a landmine detonation, which was made from an artillery shell. At that time, the majority of land mines were installed by the militants not on the road or on the roadbed, but next to it - in order to maximize the defeat of the personnel, who, as a rule, moved on armor. As a result of the detonation, the front module of the Vodnik received several holes, the crew suffered losses. The most unexpected in this stories it was the fact that during the explosion not a single glazing was broken through. On this occasion, Zhilin had to hear from the military the following: “If you hit the car well on this car, then it’s likely that some windows will remain whole.”

The fact that the bulletproof glass confirmed its strength during practical use is also confirmed by the case when the 7,62-mm bullet fired by a sniper from a distance of about 800 meters could not penetrate the driver's armored glass. In general, the protection of viewing devices from damaging them from small arms weapons the enemy was solved in a rather original way - by installing a large area without cover for the commander and driver of multilayer armored glass, which in practice proved their effectiveness.

Today GAZ-GAZ-39371 "Vodnik" is a rather rare car, and therefore, an infrequent guest of photo shoots. Finding good photos with this car is quite difficult. The best photos of the car made and posted in your blog Vitaly Kuzmin, who photographed the car from all angles during a small exhibition of equipment in the Patriot Park, which took place after the completion of the final stage of the 2015 Tank Biathlon in August of this year. 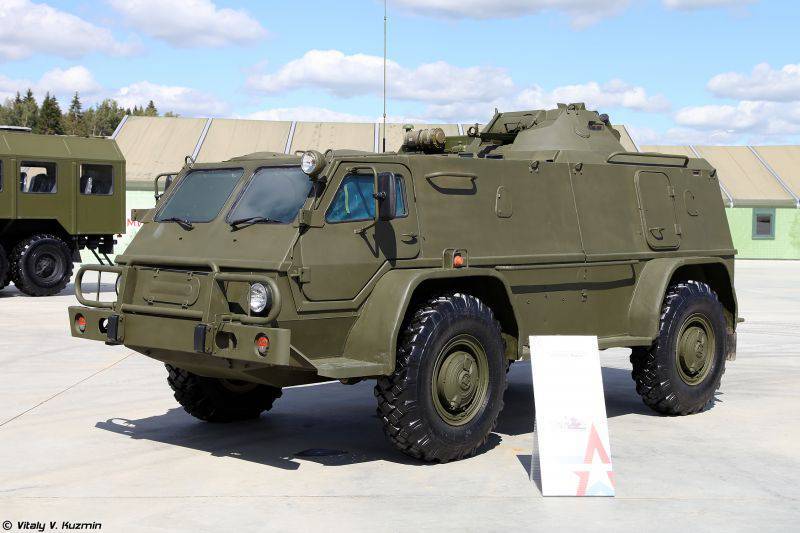 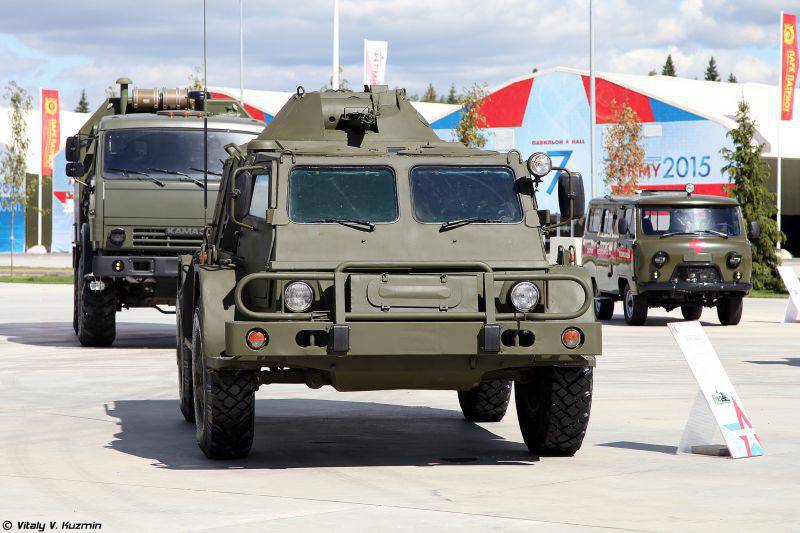 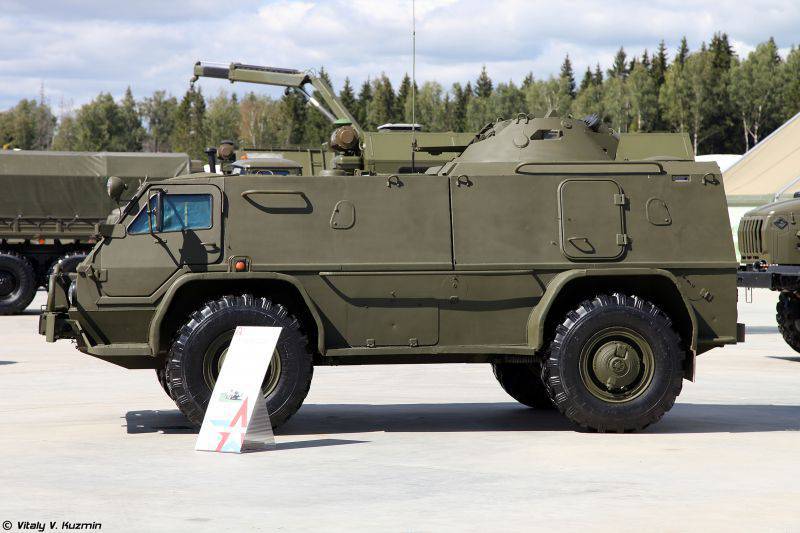 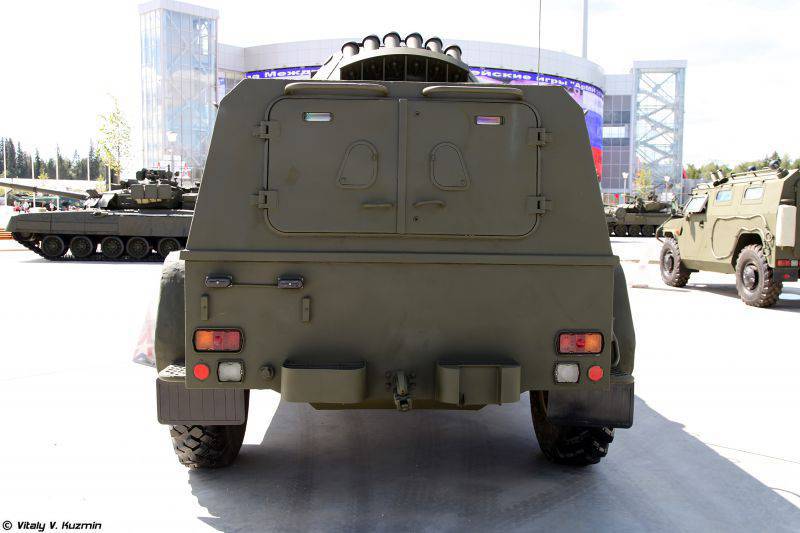 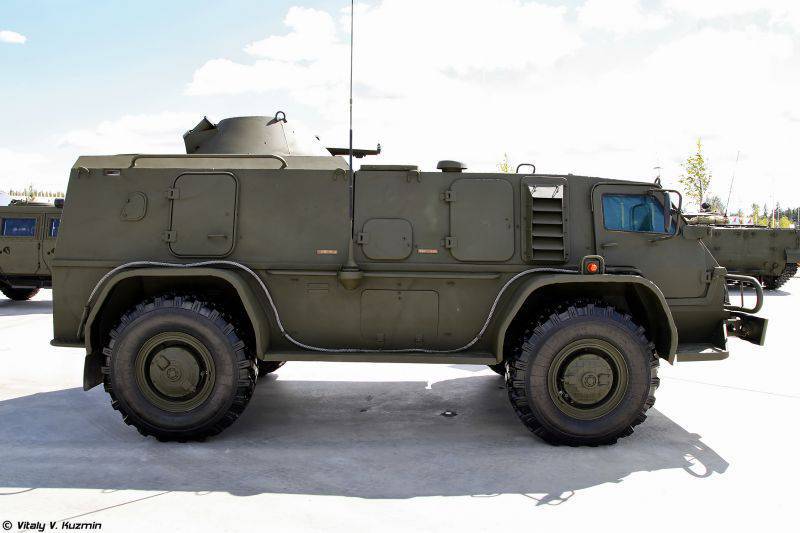 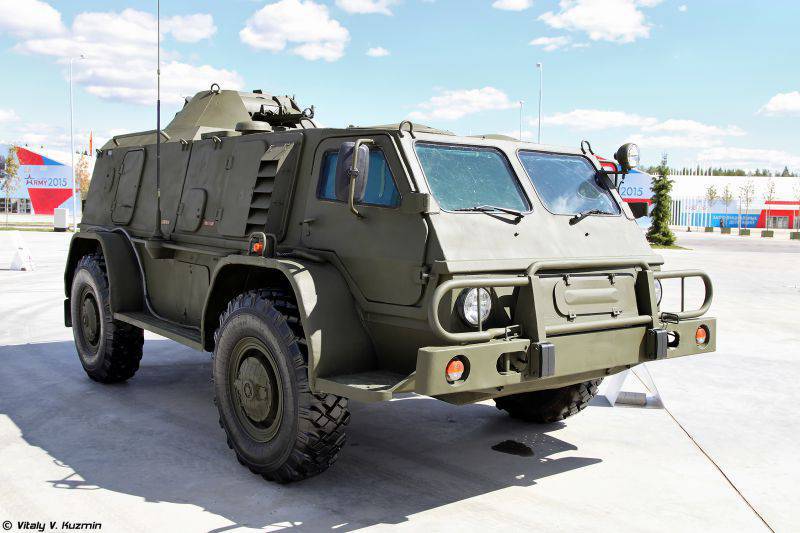