In accordance with the aircraft designation system adopted in Germany, the first Messerschmitt prototype was officially named Bf 109 V1 (V from Versuchs - experimental), at the same time it was assigned the civil code D-IABI, which was immediately written on its sides and wing. 15 October 1935 Propulsion Knoch overtook the aircraft in the Luftwaffe Test Center in Rechlin (Rechlin), where the prototype competition was to take place. Arriving at Rechlin, Knoche set up a spectacular show over the airfield, demonstrating the aerobatic properties of the car. However, an embarrassing accident occurred during the landing, which lubricated Knech's all efforts, the right landing gear cracked, and the plane received minor damage. Analysis of the causes of the accident revealed a tendency to disrupt the flow of air from the planes of the wing at high angles of attack, which took place at the “one hundred and ninth” landing - this was the first time when the large parking angle of the aircraft made itself felt. The car was quickly repaired, but the unpleasant residue remained.

Messerschmitt had to long and patiently prove to the members of the commission that nothing catastrophic had happened, that the normal process of finishing the experimental machine was going on, that such a large parking angle was chosen to ensure a landing approach with a large attack angle to reduce the landing speed, that slats retain aileron efficiency and loss of speed. The high ranks listened attentively to Messerschmitt, nodding knowingly in response, but it was clear to everyone that at the start of the tests the “one hundred and ninth” suddenly turned into an outsider ... 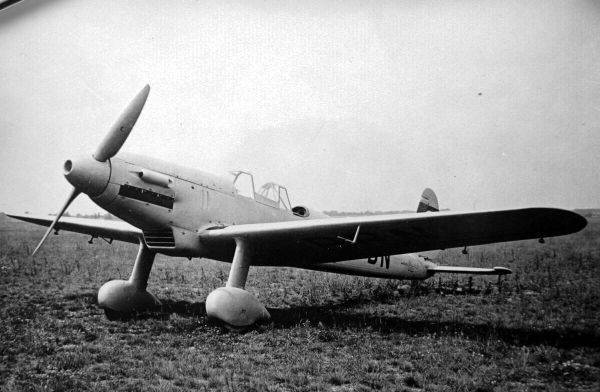 Meanwhile, competitors began to arrive at Rechlin: Ar 80, Fw 159 and He 112. For their aircraft, the designers of the company Arado chose a monocoque fuselage, which promised decent weight savings, a familiar open cockpit, a gull-wing with straight leading and trailing edges of the center section and a retractable landing gear. The prototype made its first flight in the spring of 1935, but it was soon lost as a result of the accident. Hope for a monocoque fuselage, the idea of ​​which was proposed by Walter Rethel, who worked at that company at that time, did not materialize and its design turned out to be overweight. Rethel had to resign, but he was immediately taken to Messerschmitt. Chassis cleaning turned into a very acute problem - the racks were constantly jammed in a semi-dismounted position. All attempts to solve this unexpected problem for competitive tests were unsuccessful. I had to make the chassis non-retractable, which immediately affected the speed characteristics. The machine could not stand the competition and quickly fizzled out. Flight technical characteristics of Ar 80 V2: crew - 1 people; engine - one twelve-cylinder in-line engine with liquid cooling Junkers Jumo 210C 640 l. with. at a height of 2700 meters; span - 10,89 m; length - 10,30 m; height - 2,65 m; wing area - 21,0 m²; empty weight - 1642 kg; take-off weight - 2125 kg; maximum speed at an altitude of 2700 meters - 415 km / h; rate of climb - 9,5 m / s; range - 800 km; ceiling - 9800; armament - 2 × 7,92-mm MG17 machine gun. 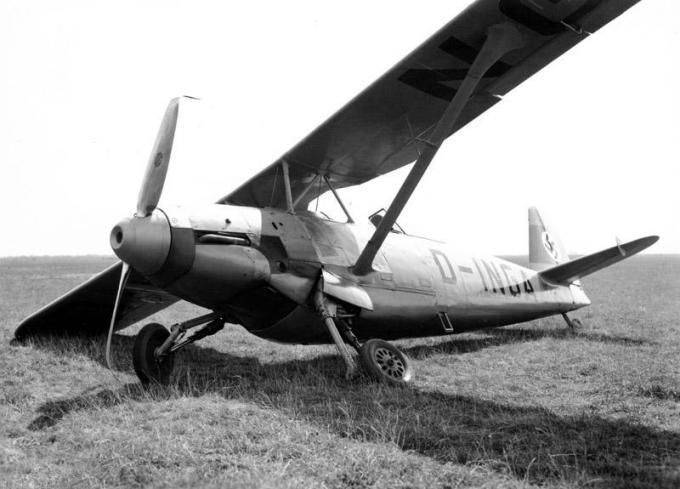 The Fokke-Wulf Fw 159 looked like a real relic of the past. The design of a parasol-type aircraft with a wing has been known since the First World War and was not widely popular among the creators aviation technicians, however, the chief designer of the company, Kurt Tank, was sure that the reserves of such an arrangement had not yet been exhausted. The fuselage of the monocoque type aircraft had an oval section and was made of light alloy. The strut wing was mounted on short racks and had a rectangular shape in plan. The cabin was closed by a movable lamp. Chassis ... There were big problems with the chassis and this plane. The harvesting-release mechanism was unique, the chassis was retracted by turning the racks back, followed by lifting the turning units up into the fuselage. The prototype crashed due to incomplete landing gear landing gear in the first flight. Further tests showed that the speed characteristics, climb rate and turn time of the aircraft were clearly lower than required. In Rechlin, the car looked pale and was soon removed from the competition. Flight performance Fw 159V2: crew - 1 people .; engine - one twelve-cylinder in-line liquid-cooled engine Junkers Jumo 210Da with a capacity of 680 liters. with.; span - 12,40 m; length - 10,00 m; height - 3,70 m; wing area - 19,50 m²; empty weight - 1877 kg; take-off weight - 2250 kg; maximum speed - 382 km / h; ceiling - 7200; armament - 2 × 7,92 mm MG17 machine gun.

Clean aerodynamic shape and retractable landing gear made the Heinkel He 112 machine a worthy rival of the “one hundred and ninth.” The commission was also impressed by the overall solidity of the aircraft’s forms, which indicated the inheritance of traditions in a well-known company. According to many experts, the open cockpit created good conditions for the review, and a smaller load on the wing and a wide gauge of the chassis spoke of high take-off and landing characteristics. Were visible and disadvantages - the plane was heavier, had an insufficient rate of climb and a smaller ceiling. Flight technical characteristics of He 112V4: crew - 1 people; engine - one twelve-cylinder in-line engine with liquid cooling Junkers Jumo 210Da with power 680 l. with.; span - 15,50 m; length - 9,00 m; height - 3,70 m; wing area - 19,50 m²; empty weight - 1680 kg; take-off weight - 2250 kg; maximum speed - 488 km / h; ceiling - 8000; range - 1100 m; armament - 3 × 7,92-mm MG17 machine gun.

Estimates in the air showed that the Bf 109 V1 has a better speed at 27 km / h. However, the test pilots of Rekhlin expressed concern about automatic slats that could work during sharp maneuvering, noted a high landing speed, a narrow chassis gauge and poor visibility from the aircraft cabin during landing. At the same time, they preferred He 112, which was devoid of such shortcomings and was more familiar to an experienced pilot. The first round was for Heinkel. The teams traveled to their firms to eliminate the identified comments, and the next round was scheduled for February 1936. 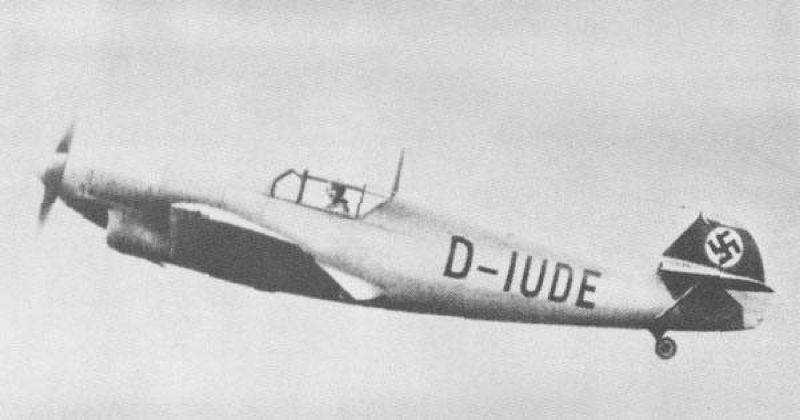 During this time, Messerschmitt managed to prepare and fly around the second prototype of the V2 (D-IUDE), on which the Jumo 210A engine of 610 l was installed. with. At the same time, taking into account the past sad experience, they reinforced the landing gear, provided places for mounting under-hood machine guns, and installed reinforcement plates on the fuselage in the tail area. At the end of February, the plane was distilled at Travemünde. 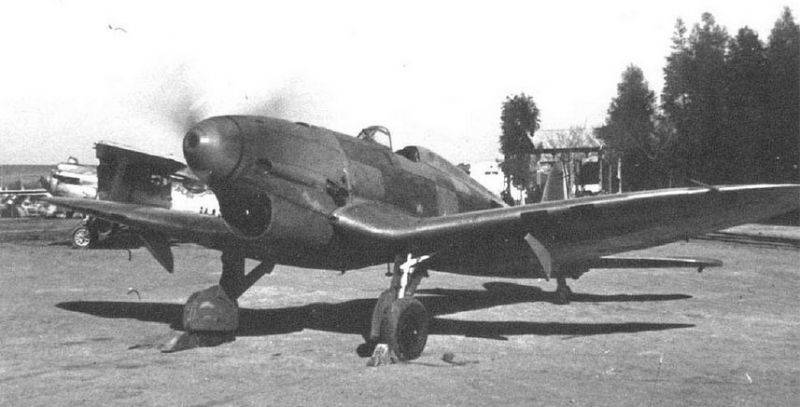 Heinkel also thoroughly worked on his car. Along with another engine (Jumo 210A), the aircraft acquired a new wing, which had a smaller area and span.

During the week, the testers examined both aircraft, squeezing the flight parameters from them. Especially carefully checked the work of automatic slats Bf 109, which caused the greatest concern among the pilots, but they behaved immaculately. The competition was pumped by a demonstration of pilotage "branded" pilots. Herman Wurster showed a spectacular cascade of figures on the Bf 109 V2. Next up on He 112 is Gerhard Nitschke. He made a series of energetic maneuvers, but one of them fell into a flat spin, and he had to throw himself out with a parachute. A large amount of work on the new prototype did not allow us to check the behavior of the aircraft in different flight modes.

Messerschmitt received an order for ten pre-production machines based on the Bf 109 V2 with the new designation Bf 109A (Anton), but Heinkel was not left with a nose. He recalled: “After testing both cars and carefully weighing the opinions of the engineers of his department, Udet decided to put the Messerschmitt fighter into service with the Luftwaffe. The launch into mass production of one type of fighter promised, of course, savings in materials and labor, but did not rule out the danger of replicating any admitted miscalculation in thousands of copies. I expressed this idea when meeting with Udet. The success of his idea of ​​a diving bomber gave him confidence, he already considered himself to some extent infallible. Perhaps, in order not to offend, but rather as a consolation, he told me: “Your bird, of course, sits down and flies better. She has the chassis that is necessary. But if we can receive machines from Messerschmitt tomorrow, if not with such a beautiful appearance, but in the required quantity, then I make such a decision, without hesitation. You can sell your car to the Turks or the Japanese, and if you like, to the Romanians. They will kiss you in the ass for this. ” Having a good long-standing relationship with Milch and knowing his dislike for Messerschmitt, Heinkel received the order to make the pre-production lot He 112 without any problems, especially since the car, despite the failure of the prototype, received the support of military pilots. 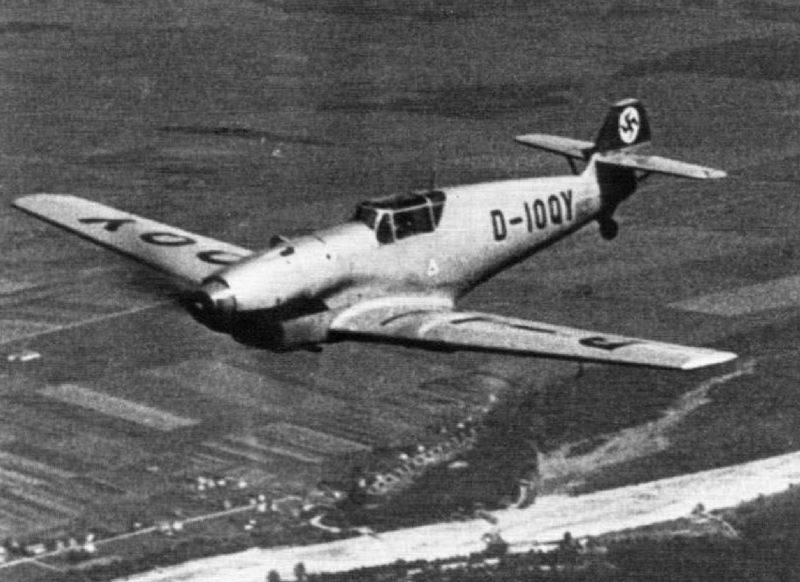 In the autumn of 1936, the third prototype of the V3 (Bf 109A, D-IOQV, serial number 760) was completed. Two engineered MG 17 machine guns of 7,92 mm caliber with an Argus synchronizer (Argus) were mounted on top of the engine on it. The possibility of mounting the Rheinmetall-Borsig motor-gun, licensed by Oerlikon (MG FF / M caliber 20 mm) was envisaged. Strictly speaking, the term "motor-gun" for Bf 109 is not quite suitable, since the gun itself was attached behind the engine, and a pipe connecting the barrel and the hollow screw bushing passed through the camber of the cylinders. But we will keep this familiar term. It was followed by V4 (D-IALY), which was the first plane out of ten ordered. V4 received the Jumo 210A engine and the third machine gun, firing through the hollow shaft of the screw. In November 1936, the aircraft passed a test cycle. Serious design differences V4 from Bf 109A became the basis for assigning to it a new (unofficial) designation - Bf 109B-01 (Bruno).

In December, V5 (Bf 109B-02) and V6 (Bf 109B-03) were ready in Augsburg. They had an improved Jumo 210B engine with a battle mode that increased its power to 5 mines to 640 l. with., the general air intake of cooling two machine guns, a modified cabin visor and a modernized wing (removed reinforcing pads on the upper surface of the wing in the chassis niches, characteristic of the V1-V4).

The Spanish Civil War presented the Luftwaffe (and not only) a great opportunity to experience the new fighter in combat conditions. And the situation in the sky of Spain was not in favor of the main fighter of the army, Franco He 51. He could not stand the competition in the fight against the Soviet I-15 and I-16.

At the beginning of December, 1936 Bf 109 V3 was urgently dispatched to Spain, and the following month Bf 109B-01 (V4) followed it. Already on December 14, the famous pilot Trautloft (Hannes Trautloft) flew around V3 in the sky of Spain. Within seven weeks, the fighters passed military trials and were sent back to Germany. The conducted air battles did not reveal superiority over the Soviet fighters, but there was also no noticeable lag in flight technical data (LTD). Encouraged by the fact that the plane had good prospects for development.

At the air show, held in Zurich-Dubendorf (Zurich-Dubendorf) at the end of July 1937, the Bf 109 and He 112 aircraft made a strong impression. Messerschmitt sent prototypes V8, V9, V10, V13 and V14 there. On the V8 and V9 engines were Jumo 210Ga, and on the V10, V13 and V14 - DB 600Aa. German pilots won all the prizes of the competition. It should be noted that the French monoplane fighter D.510 designer Devuatin (Dewoitine) with a motor power 860 hp, but with a non-retractable landing gear, barely reached the speed 400 km / h. All the experts could see for themselves what advantage the aerodynamic perfection of the aircraft gives.