December 7 2015
32
In 1942, the Owen submachine gun was adopted by the Australian army. it weapon was actively used during the Second World War and some conflicts of the next decades. The submachine gun Owen was notable for its simple but successful design, which ensured maximum production cheapness with decent fighting qualities. However, this design did not appear immediately. Before its creation, the author of the project developed a less successful model of small arms, which, however, is of great interest from the point of view stories and technology.


Self-taught gunner Evelyn Owen began working on promising systems of small arms in the late thirties. In the 1939 year, at the age of 24 years, he independently completed the development of his first submachine gun, and then without any third-party help he produced a prototype of this weapon. All parts of the submachine gun were made by Owen in his own workshop. Despite this kind of handicraft origin, the finished sample turned out to be quite interesting, but a number of ambiguous solutions did not allow the project to go any further than the prototype tests.

Creating a new weapon, E. Owen planned to develop the most simple system that could be produced in large quantities at the lowest possible cost. At the same time, as stated, his architecture of a submachine gun could be modified to use different types of ammunition. However, for solving these tasks, the self-taught constructor used not the most successful and worthy ideas that ultimately affected the future fate of the project.

Owen's lack of sophisticated equipment affected the appearance of an experienced submachine gun. Outwardly, he recalled some similar developments of the time, but the ideas used led to a lot of serious differences. For example, Owen used the original design of wooden fittings. Its main element was a box, combined with a butt and having a pistol protrusion. The stock was taken from the existing factory-made weapons. When assembling the submachine gun, Owen cut off its front part and also equipped it with an additional handle. It was assumed that the hand of the arrow controlling the fire would lie on the neck of the butt, while the handle would be used to hold the weapon with the second hand.

On the upper surface of the box was a receiver, which consisted of two parts. The bottom was fixed on the bed, and the top had a U-shaped cross section and was a lid holding all internal parts in place. All metal parts of an experienced submachine gun had an extremely simple design and were connected or fastened with the help of bolts and other similar products. This feature of the weapon was due to technological limitations associated with equipping a gunsmith workshop.

Automatic weapons prototype based on the principle of free shutter. Inside the receiver was located a movable bolt of a cylindrical shape with a returnable spring. E. Owen proposed an extremely simple design of the shutter and trigger mechanism, which could be made in the conditions of his workshop. The shutter was made in the form of a cylinder with a drummer at one of the ends. The second end was connected with a relatively long stem, passing through the reciprocating-combat spring. At the free end of this rod was located a flat plate - the shutter handle. The latter had a small cutout on the upper face and, apparently, should have been used as a rear sight. For cocking the weapon should pull such a rear sight. In addition, when shooting, he moved back and forth. 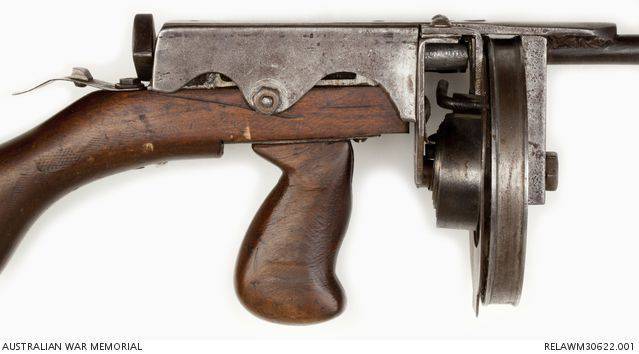 The trigger mechanism consisted of only one part, simultaneously performing the functions of the trigger and the sear. Behind the receiver on the upper surface of the neck of the butt a special curved lamellar spring was fastened with a screw, in the middle part of which there was a protrusion. When moving backward, the shutter handle, combined with the whole, bent the spring down, and then clung to its support. To make a shot, you had to press the spring against the butt and thereby release the shutter handle.

The barrel of the .22 caliber (5,6 mm) was welded to the long upper part of the receiver by welding. It was one of the few welded joints in the entire prototype design. The barrel was located with some offset relative to the receiver. In addition, only the upper part of the latter was present in the area of ​​its breech, and the side parts ended at some distance from it. This arrangement of the barrel was due to the unusual ammunition system used by Owen.

It can be assumed that the design of the ammunition supply system, like other features of an experienced submachine gun, was primarily due to technological problems. Probably not being able to make a relatively convenient detachable box or drum shop, E. Owen was forced to make a system resembling that used on revolvers. 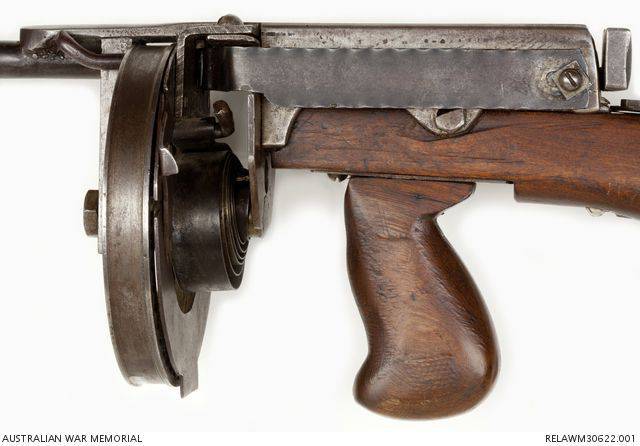 The front wall of the receiver with a hole for outputting the bolt outward had a greater height and protruded beyond the lower surface of the box. In its lower part there was another hole. A similar detail was attached to the breech breech. In the holes of these two strips of metal entered the axis of the drum like a revolving.

The fixed magazine of the submachine gun was a metal ring with 44 chambers for .22 LR cartridges. Inside the ring there was a Y-shaped part for installation on the central axis. In addition to the axis of the store was attached spring, similar to the sentry. It had to be twisted when outfitting the store, so that when firing it could turn it and serve the next cartridge. In order to avoid the loss of cartridges on the rear surface of the magazine was provided a ring of metal of small thickness. In the area of ​​the breech breech was a corner, responsible for holding the cartridge when firing. On the left surface of the receiver provided the L-shaped spring, mounted in the rear of this unit. According to some reports, it was used by the cartridge supply system.

The experienced submachine gun Owen had extremely simple sights. A welded front sight was located near the muzzle of the barrel, and as a pillar it was proposed to use a movable shutter handle with a notch. Given the handicraft nature of development and assembly, as well as the characteristics of the cartridge, such sights cannot be blamed for the deterioration of the accuracy of the fire.

In preparing the submachine gun for use, the shooter had to open the lock of the magazine’s rear cover and place the cartridge in the 44 chambers. After that, the lid returned to its place, and the spring was in charge, which was responsible for turning the magazine. After that, it was necessary to cock the weapon, pulling the bolt handle and hooking it to the support of the leaf spring. Safety devices were not provided, so after the shutter was raised it was immediately possible to fire.

Pressing the spring, acting as a trigger, led to the release of the shutter. Under the action of the reciprocating spring, he shifted forward and led to the ignition of the propellant charge of the cartridge. In addition, he moved in the direction of the L-shaped spring located on the left wall of the receiver. Under the effect of recoil of the shot, the bolt went back, compressed the spring and reached the extreme rear position, in which it was fixed due to the interaction of the handle and the stop on the spring of the trigger mechanism. At the same time, the store was being prepared for the next shot.

According to reports, no extraction system cartridge or cartridge case from the drum was not provided. Moving back, the bolt released the side L-shaped spring. Through an uncomplicated system, it influenced the ratchet of the store and allowed the latter to turn on a full turn on the 1 / 44. In this case, the weapon was ready to fire. For the next shot, you should press the trigger spring again. No means of changing the mode of fire were envisaged; the submachine gun could only fire by burst. This did not exclude the shooting of single or short bursts, but in this case, the shooter was required a certain skill. 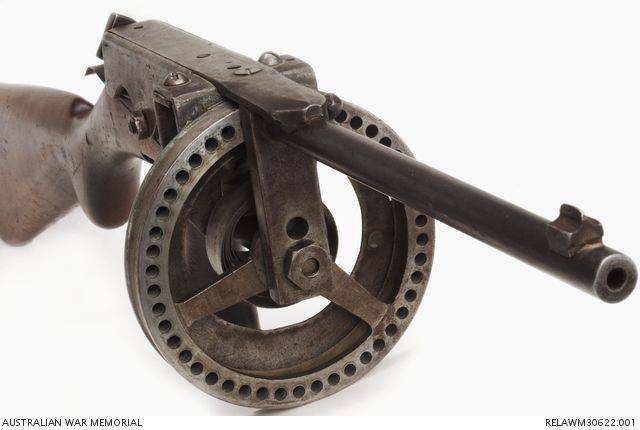 Barrel and drum for ammunition

In 1939, Evelyn Owen was able to demonstrate his design to the representatives of the Australian army. He pointed to clear advantages in the form of simplicity and low cost of construction, and also noted the possibility of a relatively simple conversion of weapons for the desired cartridge. Perhaps he hoped that such advantages of the design developed by him would be of interest to the military, so that it would be possible to continue working on advanced weapons.

Representatives of the defense ministry familiarized themselves with the development of the self-taught gunsmith and praised his enthusiasm. On this, however, and stopped. In its current form, as well as after some possible improvements, the submachine gun of E. Owen could not have high characteristics and, as a result, was of no interest to the army.

Owen's workshop did not differ well-equipped, because of what the young gunsmith had to use a lot of compromise and, as a result, strange or wrong ideas. For example, the trigger mechanism offered by him on the basis of a plate spring with an emphasis did not differ in high reliability, and in certain circumstances even represented a danger to the soldier and his comrades. Naturally, the design of this site could be improved, but in this case, cardinal processing of several weapon assemblies at once was required, followed by their complication. 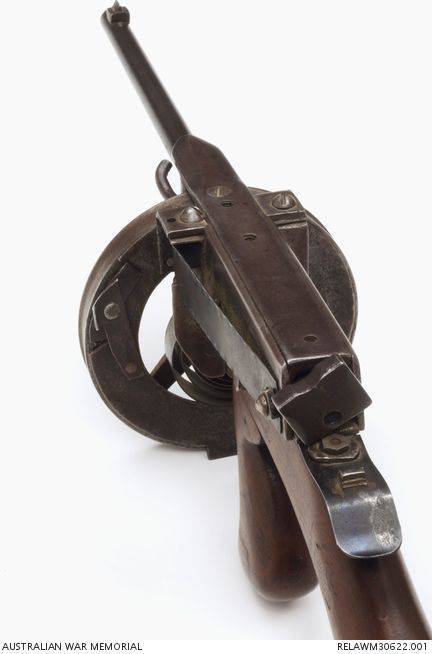 The second weak point of the project was the drum shop with a turn due to a separate spring. The design proposed by Owen ensured the fulfillment of the tasks set, but did not differ in convenience and reliability. For example, to reload the store, it was necessary to remove the back cover, knock out all 44 spent cartridges with a ramrod, and then place the 44 new cartridge in their place. The recharge time could be reduced only through the use of automatic mechanisms for extracting the cartridge and ejection of spent cartridges. The introduction of such devices without major structural changes was impossible.

At that time, many different projects of small arms, both Australian and foreign, were proposed. Thus, the improvement of the project of self-taught E. Owen did not make sense. The military department could order any other weapon that had already passed all the necessary tests and improvements. The young designer was praised, and afterwards he parted with him. In connection with this failure, he for some time lost interest in the creation of small arms and enlisted in the army. However, Owen’s career as a gunsmith did not end there. Just a couple of years after he entered the service, he began work on a new version of a promising submachine gun.

While working on his first project, E. Owen independently collected only one prototype of a new weapon, which was used in tests and demonstrated to the military. After the failure of the military, this prototype was not disposed of. He lived to this day and is now an exhibit at the Australian War Memorial Museum in Canberra.