December 3 2015
16
Russian aviation industry continues to create new technology for the armed forces. Earlier, officials announced the beginning of the development of a promising deck helicopter, which in the future will replace existing equipment of a similar class. The creation of this machine is engaged in the company "Kamov". Now some new information about a promising project was announced.


On December 1, the TASS news agency published data on a promising helicopter received from an unnamed source in the defense industry. According to the source, the new helicopter created by Kamov received the lamprey code. The brand designation has not yet been called. The new development will be another ship-based helicopter, created in the interests of fleet after shock Ka-52K. At the moment, according to the source, the project is in its early stages. Specialists of the development organization are working on the general features of the project, such as layout and various mechanisms.

The source of the TASS Agency did not mention the approximate characteristics of the helicopter under development. Probably due to the fact that the project is in its early stages, it is too early to speak about the exact characteristics of the helicopter. However, the source mentioned that the layout of the new helicopter will be traditional for Kamov vehicles. Apparently, we are talking about the use of coaxial rotors and some other spent ideas. 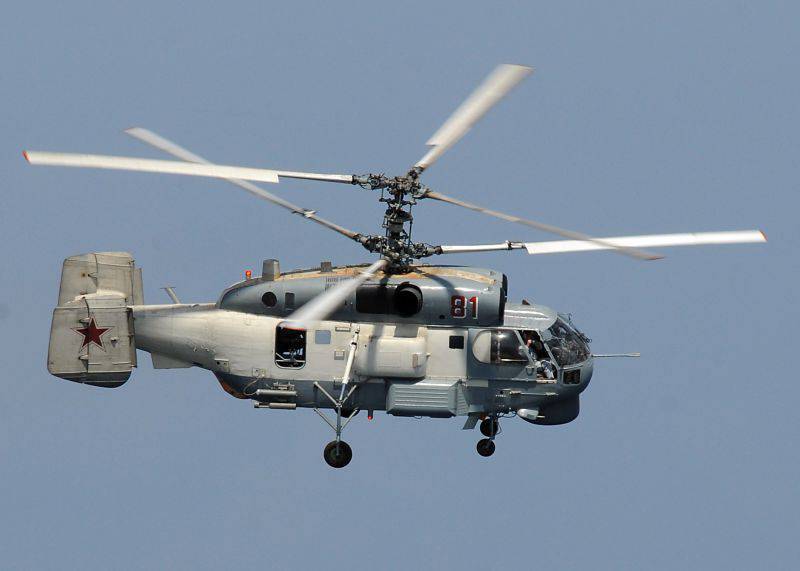 With reference to another unnamed representative of the defense industry TASS writes that in terms of size and take-off mass promising helicopter "Lampa" will differ from the current Ka-27. The new car will be smaller and lighter. Such information about the new project allows you to build some assumptions, based on known data.

It should be noted that the project of the perspective deck helicopter became known several months ago. For the first time about this development told the chief designer of the company "Kamov" Sergey Mikheev. In the summer, he announced the development of a promising multi-purpose deck helicopter, which in the future will replace the existing equipment. It was noted that the new project will use all the experience of the developer organization gained over the past 50 years.

In the future, new information about the project was announced by Major-General Igor Kozhin, Chief of Naval Aviation of the Russian Navy. In his speech at the MAKS-2015 exhibition at the end of August, he spoke about the plans of the military department and industry regarding the creation of promising helicopter technology. One of the main tasks of the Kamov company at the moment is the creation of a new deck helicopter. It was noted that this machine in the future will replace the existing helicopters of the Ka-27 family.

Also, Major General Kozhin called the approximate dates of the project. The new helicopter, whose name was not disclosed then, will have to appear in 2018-20's. It did not specify which phase of the project will be completed by the end of the decade - the construction and testing of an experienced helicopter or the start of deliveries of serial equipment.

At the very beginning of December, the name of the new project became known, and to a certain extent some previously published data on the technical features of the new helicopter were confirmed. However, most of the information about the “Lamprey” project is still unpublished and probably will not be disclosed at all in the next few years.

At the moment, you can imagine the overall look of a promising helicopter "Minoga" of the company "Kamov", but so far it remains only to speculate about the various nuances of the project. Apparently, it will be a machine with traditional for the brand "Ka" the bearing screws of the coaxial circuit, two turboshaft engines and a fuselage of characteristic shape, formed by straight and curved surfaces.

Since the helicopter is proposed for basing on ships, it will receive the rotors of a folding structure, and its dimensions will not go beyond the previously defined standards. The new information, according to which the Lamprey will be smaller and lighter than the Ka-27, suggests that the fuselage length of the prospective machine will not exceed 12,25 m, the height will be less than 5,4 m, and the rotor may have a diameter up to 15,9 m. In addition, the normal take-off mass will be within 10,7 t, and the maximum will not exceed 12 t.

Like its predecessors, "Lampa" can become the basis for several specialized modifications for various purposes. It can be assumed that cargo-passenger, search and rescue and other modifications will be built on the basis of a common platform. In addition, I. Kozhin spoke directly about plans to create an anti-submarine helicopter. This means that a prospective deck helicopter will be able to receive the necessary set of special equipment or armaments, ensuring the solution of certain tasks.

The carriers of the new helicopter will be able to become all the ships of the Navy of Russia, equipped with a landing area and a hangar. Modern Russian ships, as well as ships of relatively old construction, are equipped with standard-size hangars and standardized service facilities for helicopters. Thus, the replacement of the Ka-27 family of helicopters with the Lamprey machines is unlikely to be associated with noticeable problems.

According to reports, at present, Kamov specialists are engaged in design work and are creating various components and assemblies of a promising helicopter. It will take several years to work on the Minoga project; the appearance of the first helicopter of the new model is expected at the end of this decade. Thus, the navy will receive the first mass-produced vehicles of the new type no later than the beginning of the twenties.